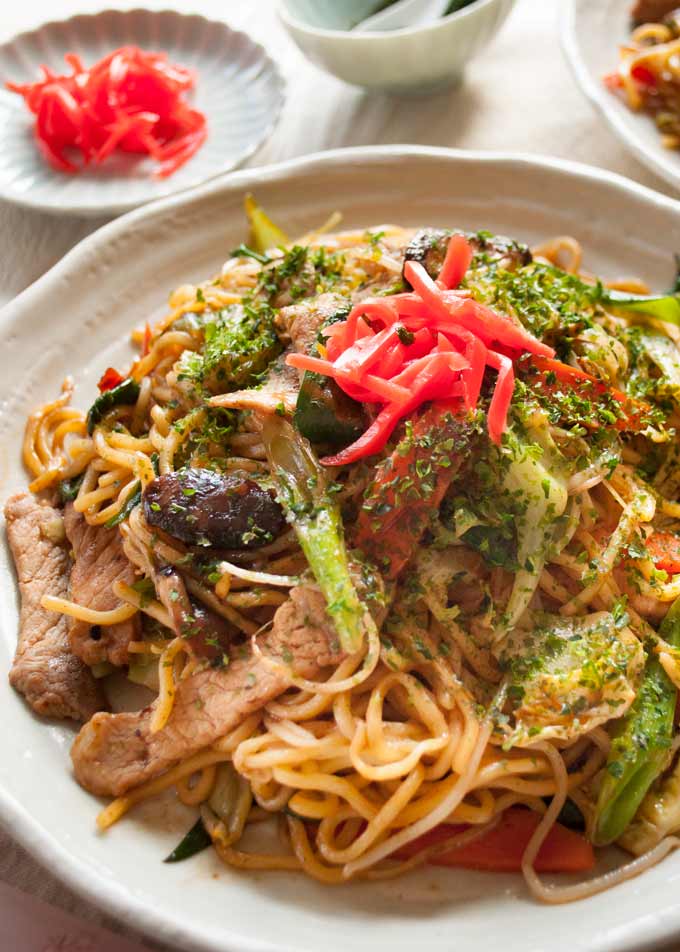 Yakisoba is known as one of the popular street foods in Japan. You will always find Yakisoba stalls wherever festivals are held. At the stalls, a large quantity of noodles are cooked on a huge iron plate. When you buy, your portion is taken directly from the iron plate and served hot.

What’s in My Yakisoba

The ingredients are grouped into three – Main Ingredients, Yakisoba Sauce and Toppings. 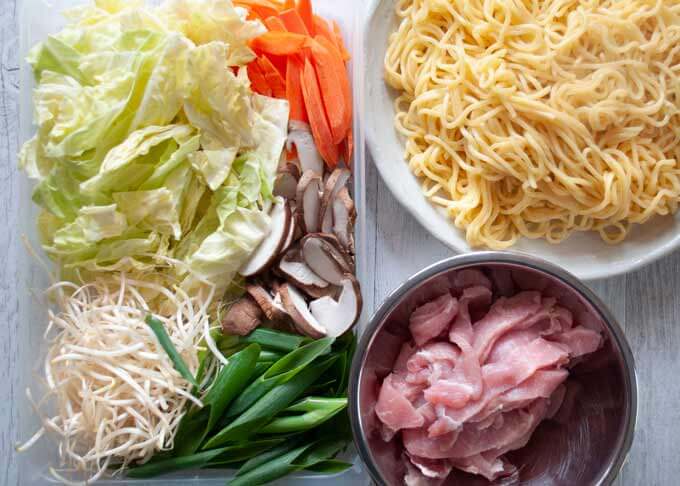 The Yakisoba sold at festival stalls normally has a very small amount of vegetables in it, but when you make it at home you can add plenty of vegetables. You don’t need to use all these vegetables, but these are the ones most commonly used in Yakisoba in Japan. You can also use sliced onions and chopped Asian greens.

The meat can be chicken or beef slices, but pork is the most popular meat for Yakisoba.

Yakisoba noodles are yellow noodles made from ramen noodles that are steamed and coated slightly in oil so that they cook faster, and it is easier to separate each strand of noodle when stir frying.

If you are in Japan, you can buy a packet of noodles labelled as ‘yakisoba noodles’ or ‘for yakisoba’. But in Australia, I cannot buy such noodles, so I substitute them with Chinese yellow noodles.

The most suitable Chinese noodles are round and of medium thickness (about 2mm/1⁄16″), and not oily. The photo below shows the yellow noodles I used in this recipe, but you do not have to use the same. 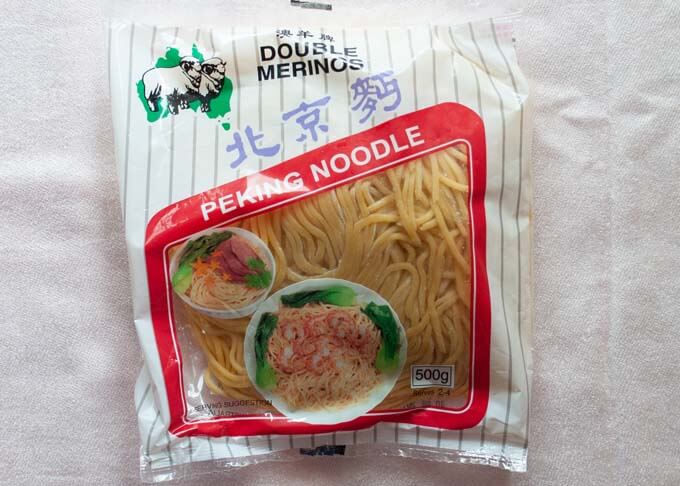 If you think about it, the ingredients are almost identical to those used in Yaki Udon (Stir Fried Udon Noodles), except for the noodles. But there are two important ingredients that make today’s noodle dish special and totally different from Yaki Udon. They are a special Yakisoba Sauce and Yakisoba Toppings.

Bulldog is a Japanese brand name. When I talk about my Yakisoba sauce, I have to talk about Bulldog sauces. Please see the subsequent section BULL-DOG – THE JAPANESE COMPANY for more details.

The following ingredients are probably unfamiliar to many people, but they are the must-have toppings. Please see the subsequent section ABOUT AONORI AND BENISHŌGA for more details. 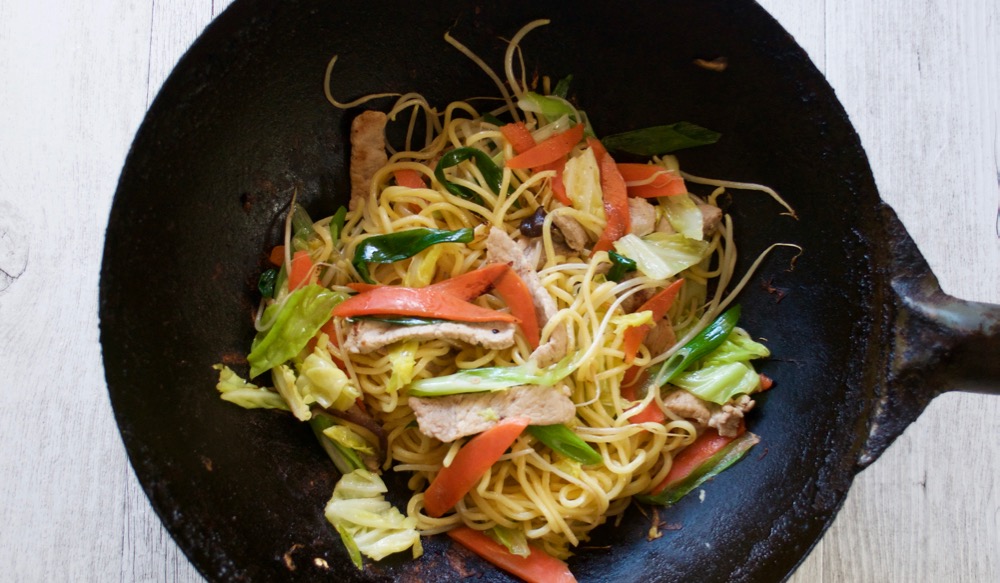 As you all know, soy sauce is one of the key seasonings of Japanese cuisine and can be used as a dipping sauce too.

But in Japanese home cooking, there is something called ‘sōsu‘ (ソース, sauce), which is also used regularly. Japanese people even eat shredded cabbage or green salad with sōsu dribbled over the vegetables, instead of using the Western-style salad dressings.

The colour of Japanese sauce is dark brown, and it comes in different thicknesses. The sauce with a low viscosity is very similar to Worcestershire sauce. 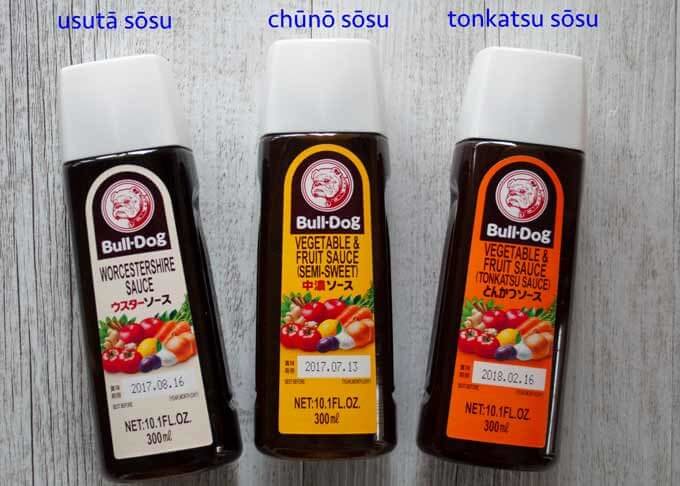 The use-by date is overdue but don’t worry, I took this photo long time ago and they have long gone.

Tonkatsu sōsu was made specifically to pour over Tonkatsu (Japanese Pork Schnitzel) or other bread crumbed deep-fried dishes such as croquettes and cutlets. It is the thickest and the sweetest sauce of the three Bulldog sauces.

Chūnō sōsu sits between the other two sauces in both flavour and thickness. The word ‘chūnō‘ (中濃) means medium thickness.

You can buy these sauces at Japanese/Asian grocery stores and even at some supermarkets. You can also buy Yakisoba sauce in a bottle, but just like any other foods, I like my home-made version of Yakisoba sauce. 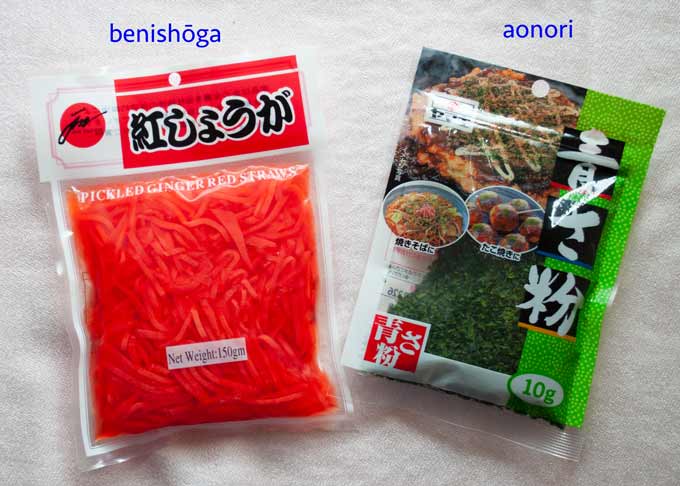 The word ‘ao’ (青) in aonori means blue, and nori (海苔) is the generic term for seaweed. Well, as you can see in the photo above, aonori is not blue but green.

In Japan, it is said that in the Heian period (which ran from 794 to 1192), when the capital of Japan was Kyoto, there were only 4 adjectives to describe colours. They were black, white, red and blue. So, each colour had to cover a wider range of real colours, e.g., calling something blue even if it is green. How interesting!

The word ‘beni‘ (紅) in ‘benishōga’ means red and ‘shōga’ (生姜) is ginger. It is quite different from the pickled ginger served with sushi. Pickled ginger for sushi has a much lighter colour – either very faint pink or the natural colour of ginger. It is also slightly sweet, while red pickled ginger is not sweet and a bit salty. 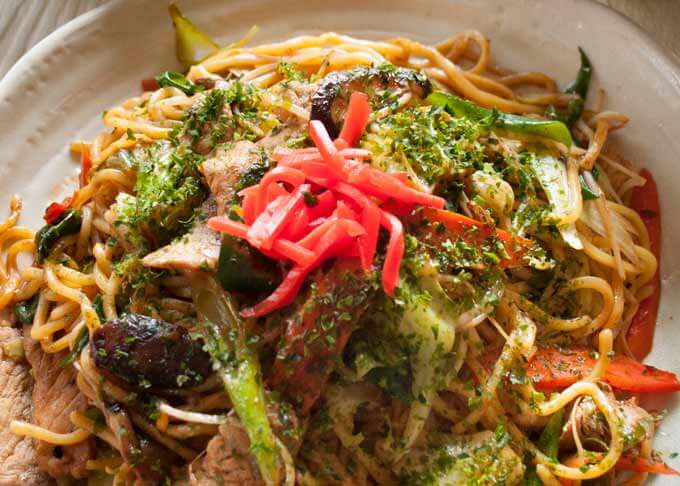 Although Yakisoba is still good without the toppings, I think that aonori over the mound of Yakisoba with benishōga on top makes Yakisoba great. 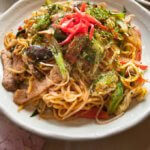 Yakisoba (焼きそば) is the Japanese version of stir-fried noodles. The noodles are cooked with sliced pork and plenty of vegetables (cabbage, bean sprouts, carrots, shiitake mushrooms and green onions), then coated with a special sauce. Instead of pork, chicken or beef would also work well. You can use different vegetables that are suitable for stir-fry too.

Please see the video above this recipe card.

I would not recommend very thin noodles as they will overcook easily and become doughy. I would not use Hokkien noodles either as they are quite oily and too heavy for Yakisoba in my view.

2. Any cut of pork suitable for stir-fry is fine. I happened to have pork scotch fillet. I sometimes use thinly sliced pork belly. It makes Yakisoba a bit richer, but I like it.

You can use chicken or beef, although pork is the most popular meat.

3. I randomly cut the cabbage into bite size pieces. The size of the pieces is about 5cm x 3cm/2" x 1¼". The shape does not have to be rectangular at all.

4. You can adjust the quantity of each ingredient to your liking. I used the Bulldog branded sauce, but you can use other brands if you like.

5. You can buy Bulldog sauces at Asian/Japanese grocery stores. See the photos in the post.

6. The dashi seasoning powder is used to add umami to the sauce. It is an instant dashi powder that you can buy at Japanese/Asian grocery stores or possibly at supermarkets (see Home Style Japanese Dashi Stock for samples).

Alternatively, you can add 2 tablespoons of bonito flakes when mixing the sauce with the noodles.

If you don’t have either of them, you can omit this.

7. Aonori is quite different from yakinori (焼き海苔, roasted seaweed sheets used in sushi rolls). It is green and chopped into teeny tiny pieces (see the photo in post). It is used not only as a topping for Yakisoba but also for Okonomiyaki (Japanese Savory Pancake). It is sometimes added to the batter for Tempura.

You can buy aonori at Japanese grocery stores. See the post for a sample pack.

Although the flavour is quite different, you could substitute aonori with yakinori (roasted seaweed sheet). Julienne a small sheet of yakinori into about 2.5cm/1' long strips.

You can buy benishōga at Japanese/Asian grocery stores and perhaps at some supermarkets. See the post for a sample pack.

9. From this step onwards, if the wok or frying pan is not large enough to cook all of the Yakisoba at once, cook in batches in individual serving portions or half the quantity. You will get a much better result than trying to cook a huge amount of noodles in a small wok/frying pan. I actually cooked my Yakisoba in batches.

When cooking in batches:
Before you add the noodles, take out the stir-fried meat and vegetables, leaving one serving portion in the wok/frying pan. Then add one serving of noodles and continue following the steps using one serving of the sauce. Repeat for the other servings.

Originally published in August 2016, updated in March 2020 with a video and improved photos & contents, further improved contents and video in February 2022.

Yakisoba has a sweet rich flavour, so I matched it with a simple Spinach Ohitashi, which cleanses the palate. I also selected Izakaya-style Marinated Quail Eggs, and Edamame, which makes this the kind of meal that you may have at izakaya. 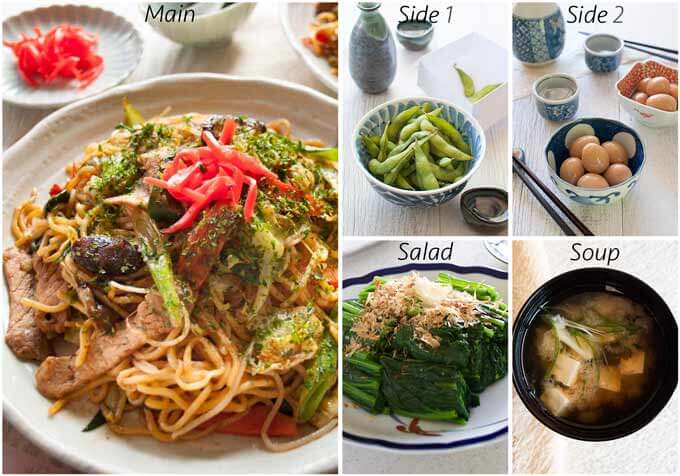