The typical egg dish in Japanese cuisine, dashimaki tamago (出し巻き卵, Japanese rolled omelette) is made by rolling thin layers of egg in the frypan. The beautiful layers of the egg when sliced, and the sweet dashi flavour make this omelette so unique. 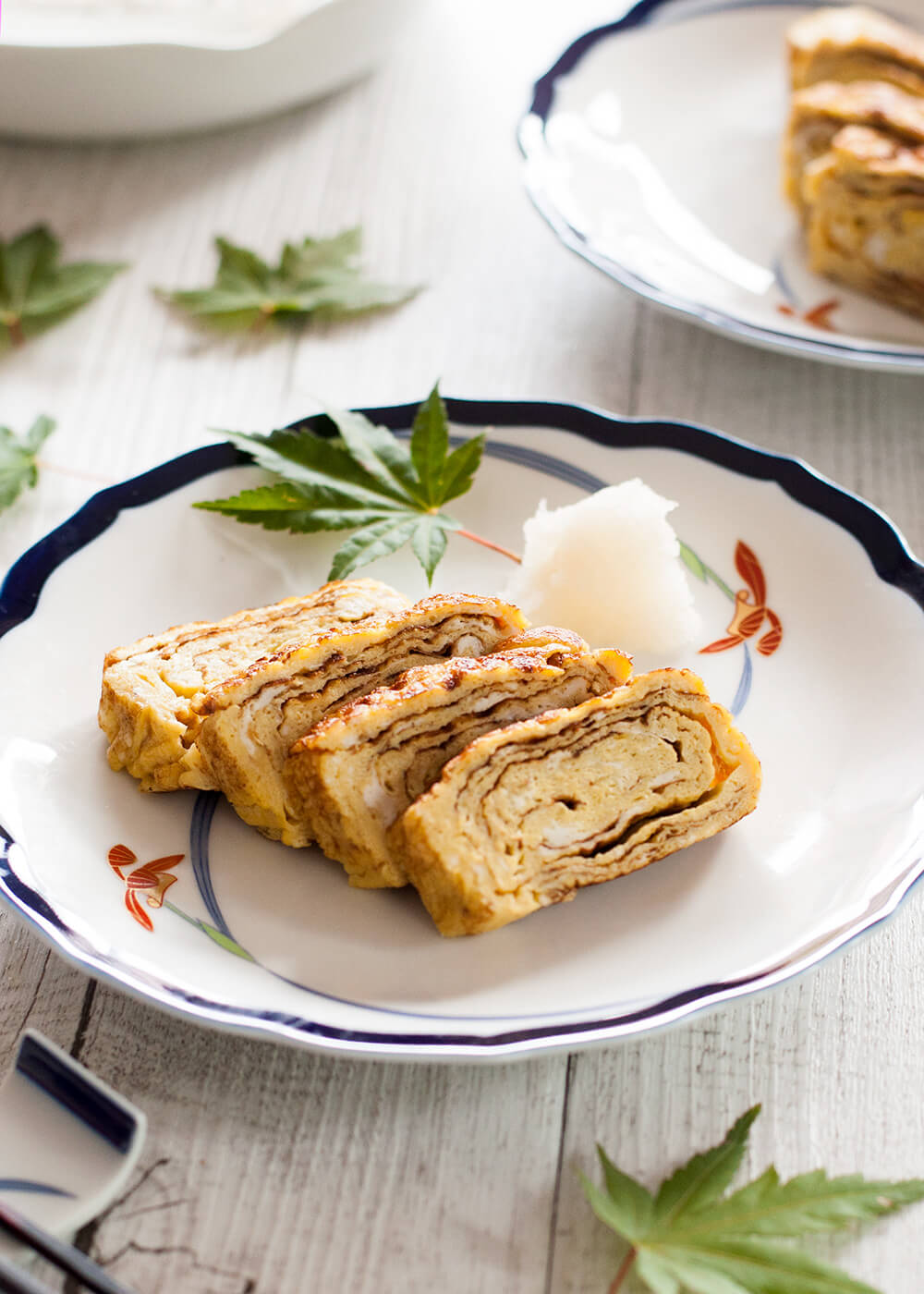 If you have a Japanese style breakfast, often you will find a slice of dashimaki tamago among the several dishes on the table. You will also find dashimaki tamago in lunch boxes, particularly in the popular lunch box called makunouchi bento  (幕の内弁当) which consists of rice, pickles, meat, fish, vegetables and egg. 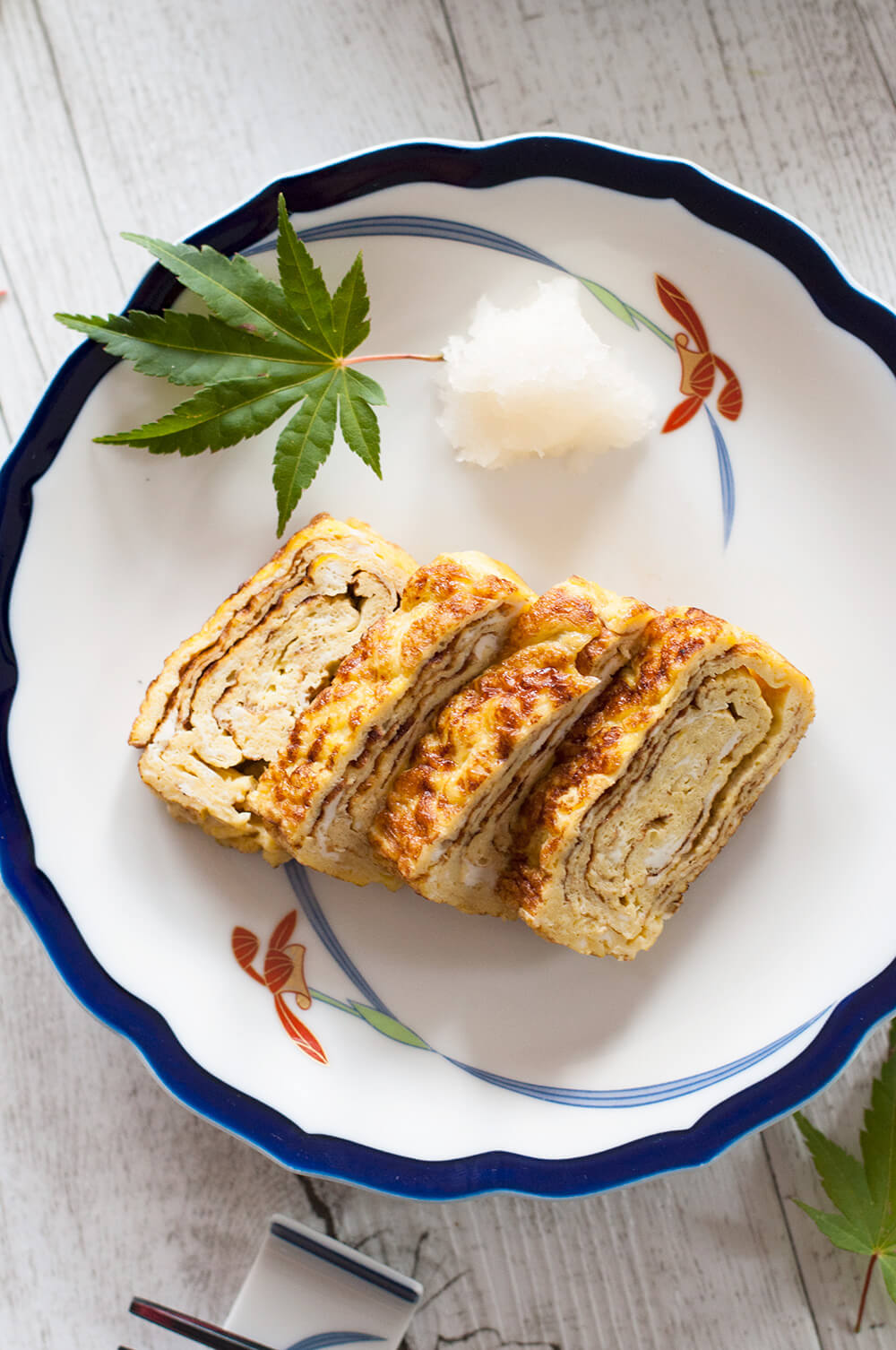 Unlike Western style omelettes, dashimaki tamago has a sweet flavour with dashi, sake, sugar and soy sauce. Some recipes even add mirin to it. I am not fond of very sweet dishes so my recipe does not use mirin. It uses a small amount of sugar to give only a subtle sweetness. You do taste dashi and that’s where the name “dashimaki tamago” came from. The word “maki” means “rolled” and “tamago” is “egg”.

Dashimaki tamago is made by rolling the thinly spread egg. The rolled egg is pushed to one side, more egg is added into the pan and the previously cooked egg is rolled over the thin egg to make layers of egg. It is meant to be a long rectangular shape and the Japanese use a rectangular tamagoyaki pan (omelette frypan) which is made just for this. It makes the shaping of dashimaki tamago easier. You can see in the step-by-step photos at the end of the recipe how it is used.

Just like making an omelette, making dashimaki tamago looks simple but it is technically challenging. It is quite difficult to make a perfect one like those served at expensive Japanese restaurants or sushi restaurants. I cannot make them like that. But I believe anybody can make dashimaki tamago which looks like it and tastes great. You just need to know a few key things.

Professionals make dashimaki tamago using chopsticks which is a pretty hard thing to do. You would say, “how can you fold a soft and thin wide sheet of egg with just two sticks?”. I can tell you, it’s really hard. I used to be able to do it when I was cooking Japanese meals everyday but not anymore. I was actually shocked to learn that a different lifestyle takes away certain culinary skills! 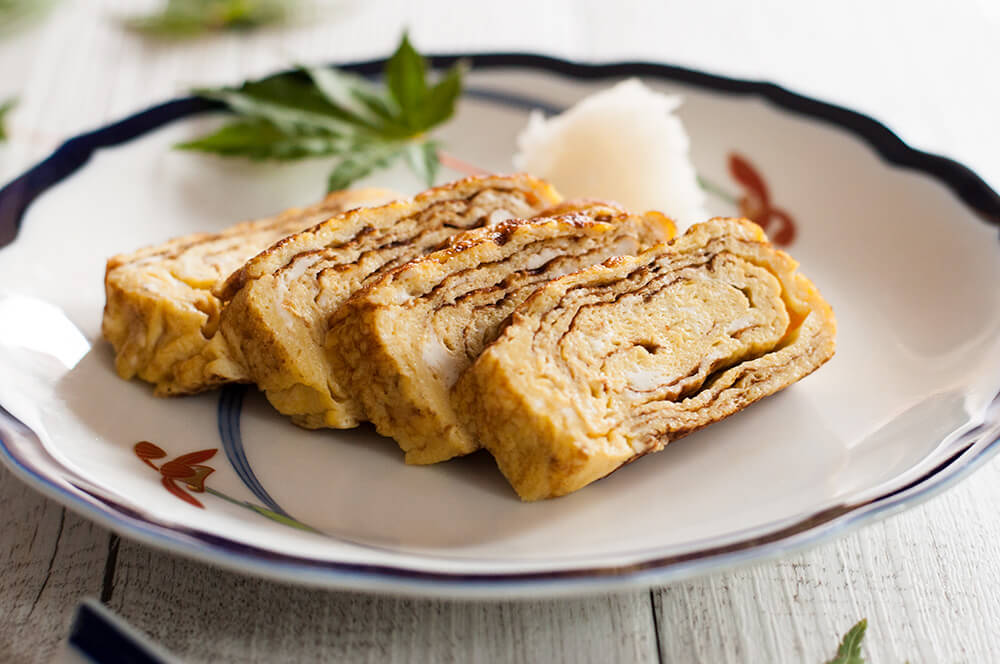 When you slice dashimaki tamago, you will notice the layers of egg. I love the pattern of the thin layers of the egg. So I purposely burn each layer slightly to make the lines stand out. But the down side of making burnt lines is that the each layer tend to get separated unless the timing of rolling the egg is perfect. You can see the separation of the layer in my photo. They are meant to be glued together but I was too slow to roll! My son was very quick to point it out when he taste tested.

We had a family temakizushi (手巻き寿司, hand rolled sushi) day few weeks ago and dashimaki tamago was one of the ingredients to go into the temakizushi. Here is a snap peek at “Temakizushi” which I will be posting soon. So watch this space! 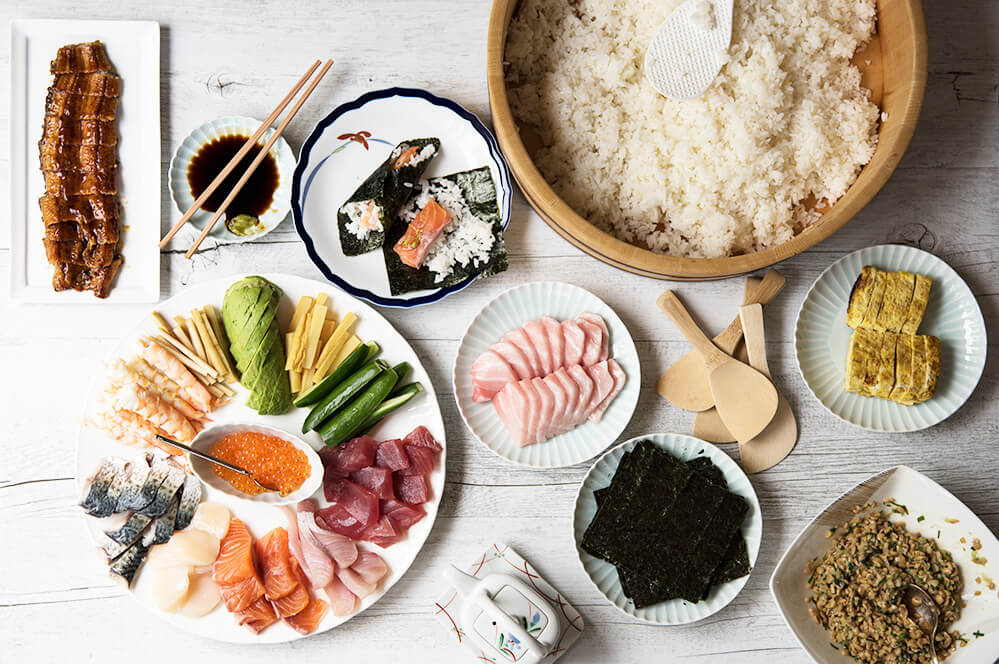 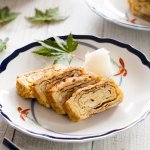 1. I used small eggs and total weight not including shells was just over 200g (7oz).

If your eggs are very large, the total weigh could go close to 50% more than what I had. Then please adjust the other ingredients, accordingly.

Slight variations to the total weight of eggs should not require adjustment.

3. Move chopsticks or a fork sideways in the egg to beat the egg instead of using a whipping action. Ensure that egg whites are broken down into smaller bits.

4. I used 23cm (9") frypan which has the bottom size of 19cm (7½") in diameter. Any larger than this will make a flatter dashimaki tamago as the egg will spread wide and thin.

If the frypan is smaller you will need to add smaller quantity of egg at a time so that each layer of egg is not too thick. Small pan will make a thicker dashimaki tamago.

6. It is important to shape the first roll with even width otherwise you will end up with deformed rectangular dashimaki tamago. You could also gently press down the egg roll using the spatula if the surface is uneven.

7. Until you are used to making dashimaki tamago, I would recommend using a measuring cup for the egg mixture so that you can cook the same amount of egg mixture each time. It is important to cover the entire frypan with the egg when poured.

8. If the shape of the dashimaki tamago is uneven, you could correct the shape while it is still hot. Place a baking paper over the egg and use both hands to hold and press to shape it (see the step-by-step photo below). 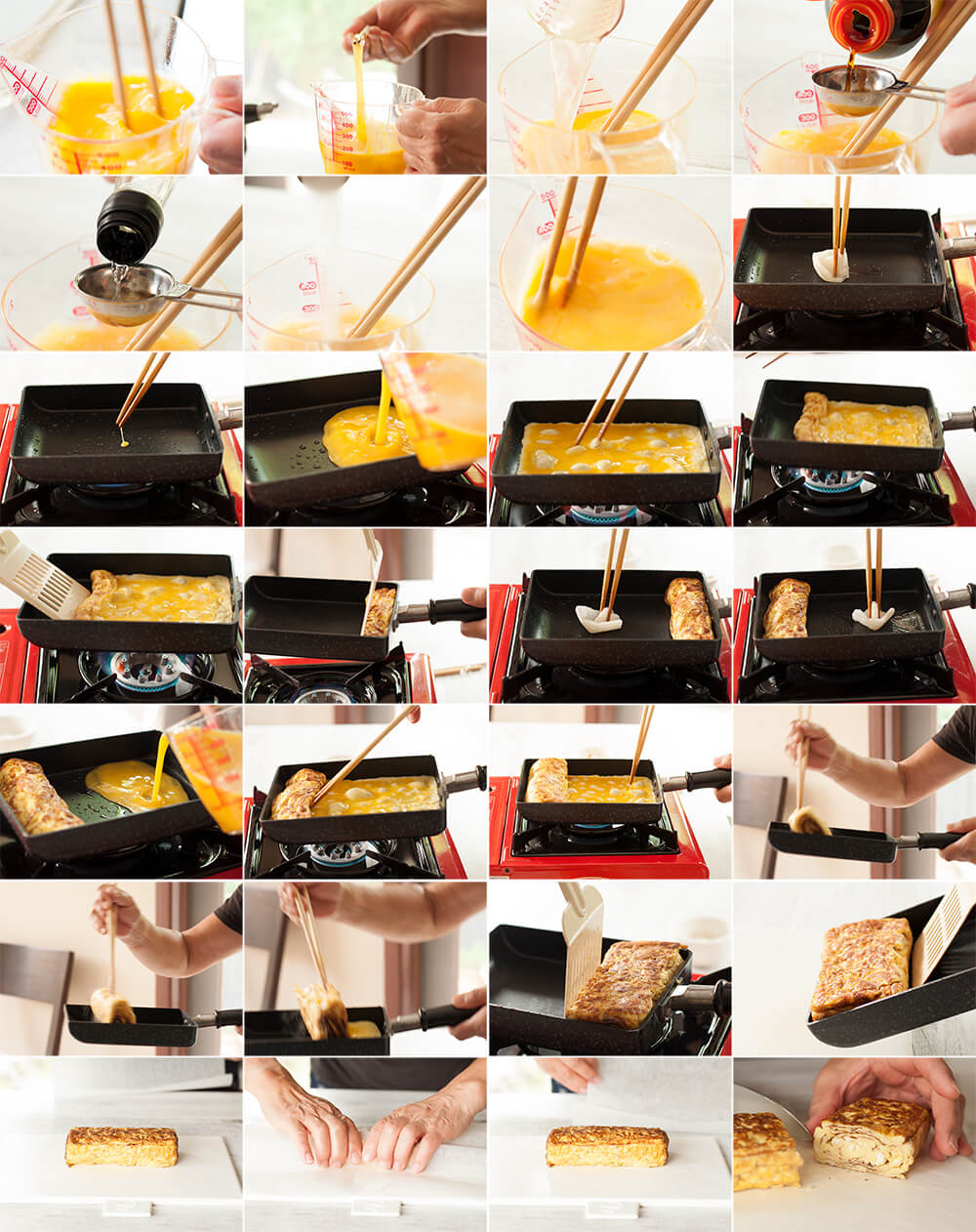