Yaki Udon (焼きうどん) is a Japanese udon noodles stir-fried with your choice of protein and vegetables. Protein can be thinly sliced meat or any seafood suitable for stir-fry. This is a very quick and simple udon recipe but so delicious. 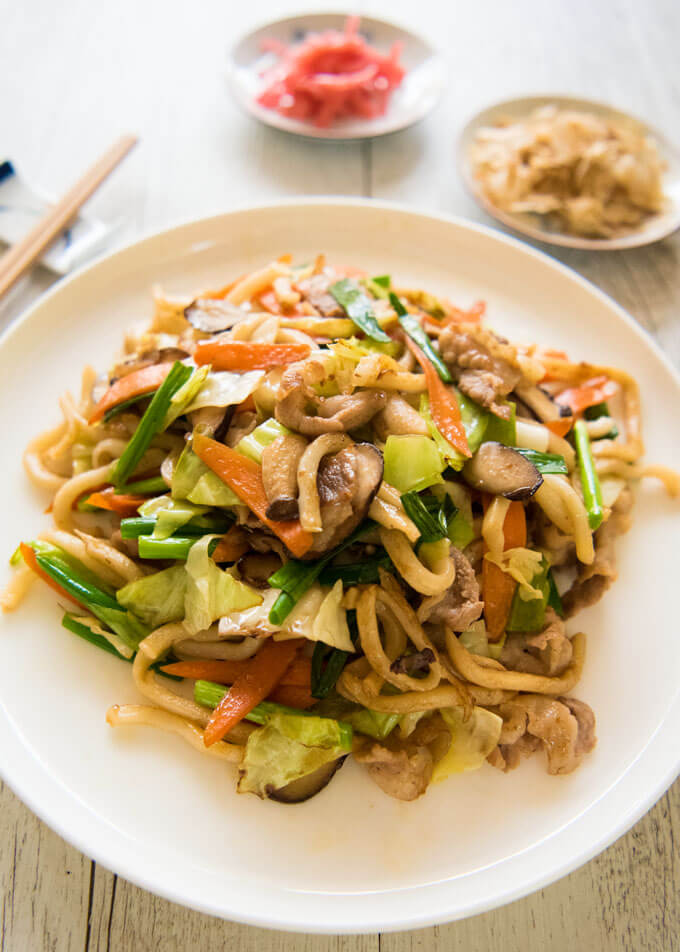 Yaki Udon is similar to Yakisoba but the noodles are udon. You can say that the dish becomes Yaki Udon if you make Yakisoba with udon noodles instead of egg noodles. But there are also a couple of differences.

Firstly, the flavour can either be sauce flavour like Yakisoba or soy sauce flavour. Secondly, it is almost a ‘must’ to top Yaki Udon with a plenty of bonito flakes.

My Yaki Udon has a soy-based flavour with plenty of bonito flakes on top. This gives so much umami to the stir-fried udon noodles and takes the flavour to the next level.

What’s in My Yaki Udon 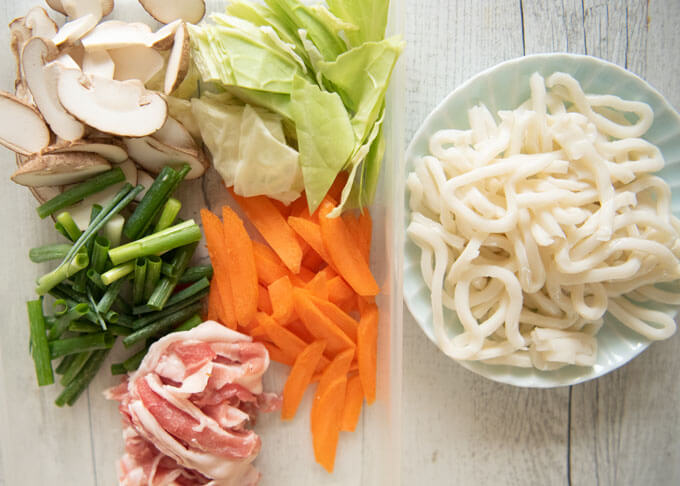 I made two different Yaki Udon dishes using pork slices and prawns. In both dishes, I used the same combinations of vegetables. They are:

Instead of/in addition to the above, you can consider the following vegetables:

You can stir-fry almost any meat/seafood and vegetables with the udon noodles as long as they are suited for stir-fry, however, in Japan beef is not often used in Yaki Udon.

About the Flavouring Sauce 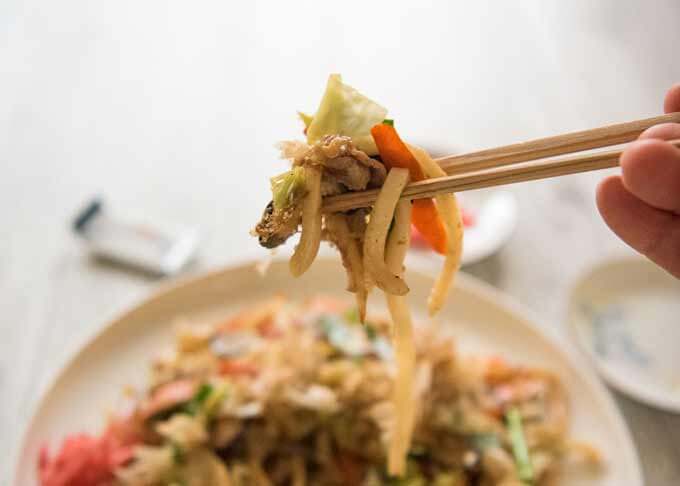 My sauce is quite simple. It is a mixture of soy sauce, sake, mirin and sesame oil. Blow are the qantities of each ingredient for 2 servings:

Just mix them and pour the sauce over the stir-fried udon noodles at the end.

As I mentioned earlier, you can use the same sauce as yakisoba sauce. But I think that the sauce in my Yakisoba recipe is a bit too heavy for Yaki Udon. If you prefer the yakisoba-style sauce to my soy-based flavouring, I would recommend using Worcestershire sauce instead. It is not as thick as my Yakisoba sauce and it’s not sweet either.

How to Make Yaki Udon

The method of making Yaki Udon is very similar to that of Yakisoba. Well, actually, it’s almost the same except that the sauce is different. 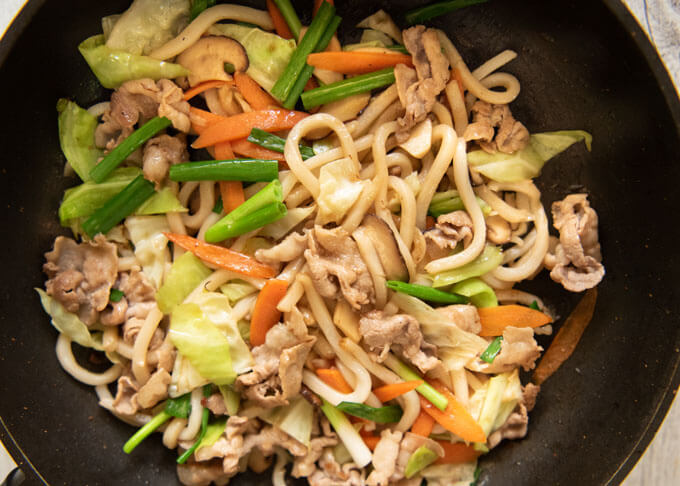 Here are some notes to help you to make a perfect Yaki Udon:

What makes today’s noodle dish so tasty is a generous amount of katsuobushi (鰹節, bonito flakes). It is also called ‘kezuribushi’ (削り節).

Bonito flakes add umami to the dish and make the noodles so flavoursome. In my view, bonito flakes are a ‘must’ for Yaki Udon. 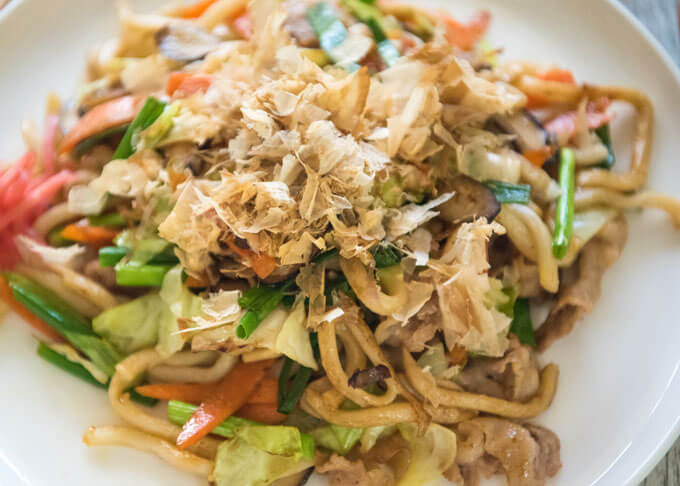 Another common topping is a red pickled ginger called ‘benishōga’ (紅生姜). You can find more details about benishōga and a photo in my post Yakisoba. You only need a small amount of benishōga. It can be placed on top of the pile of the Stir-fried Udon Noodles or on the side.

In the recipe, I included the ingredients and instructions to make either Pork Yaki Udon or Prawn Yaki Udon. The only differences are the choice of protein, i.e. pork slices or prawns, and the way the prawns are stir-fried with other ingredients.

Here is the photo of Prawn Yaki Udon. I split the prawns in half as whole prawns were too large for Yaki Udon. Split prawn meat twisted and curled when cooked and I thought it was fancy. 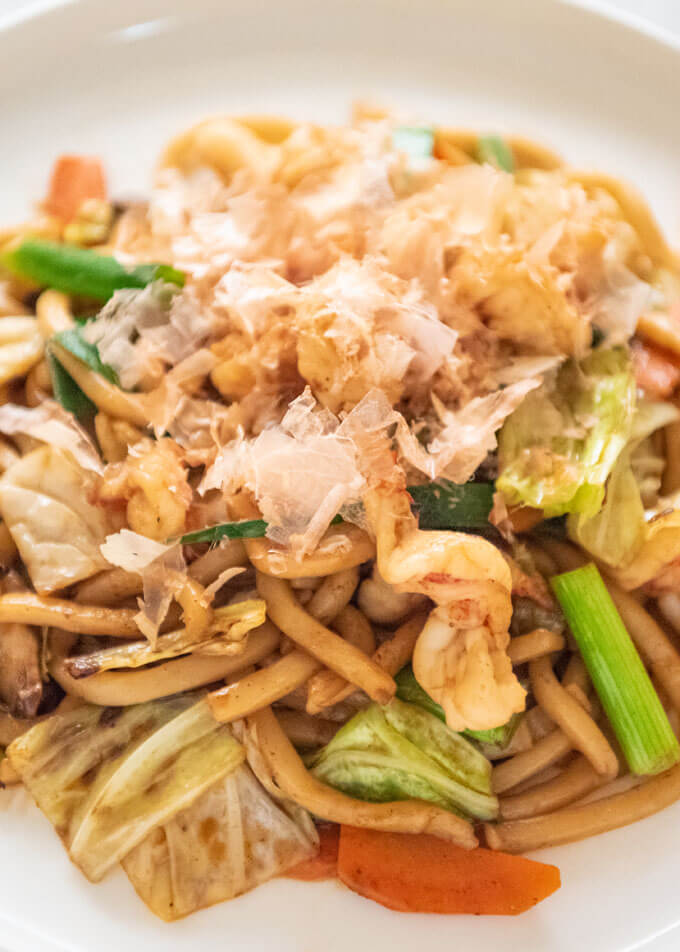 Perhaps because of the difference in flavouring, Yaki Udon tastes lighter than Yakisoba and a little bit more authentic.

I hope you try this tasty noodle dish! 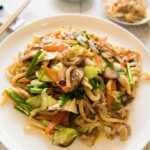 Yaki Udon (焼きうどん) is a Japanese undon noodles stir-fried with your choice of protein and vegetables. Your protein can be thinly sliced meat or any seafood suitable for stir-frying. This is a very quick and simple udon recipe and so delicious.

The recipe is written to make either Pork Yaki Udon or Prawn Yaki Udon. The only differences are the choice of protein, i.e. pork slices or prawns, and the way the prawns are stir-fried with other ingredients.

1. I used 2 packs of fresh udon noodles that I bought from an Asian grocery store. They were slightly more expensive than those you find in supermarkets, but the quality of noodles is better. They do not easily break into short pieces when stir fried.

2. I used very thinly sliced pork belly strips that I cut to short bite-size strips. But you can of course use sliced pork with less fat.

3. If the carrot is thick, halve it vertically, then slice diagonally.

Yaki Udon contains a sufficient amount of carbohydrates so you don’t need a bowl of rice. It also contains quite a bit of vegetables but I added two side vegetable dishes that have different textures and flavours.

If you feel that you need more protein, replace Hijiki Seaweed Salad with something like Squid with Cucumber and Wakame Nuta. Nuta (vinegary miso dressing) brings a totally different flavour to the meal. 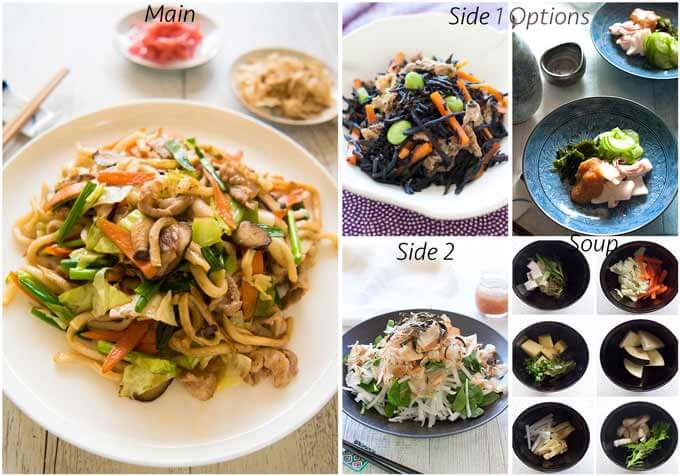