Deep-fried Horse Mackerel (Aji Fry) is a traditional Japanese home-cooking dish, and one of my favourite dishes. Butterflied horse mackerel (also called yellowtail or jack mackerel in Australia) is coated in breadcrumbs and deep-fried to a perfect golden colour. Nothing is better than biting into the hot deep-fried crumbed fish! 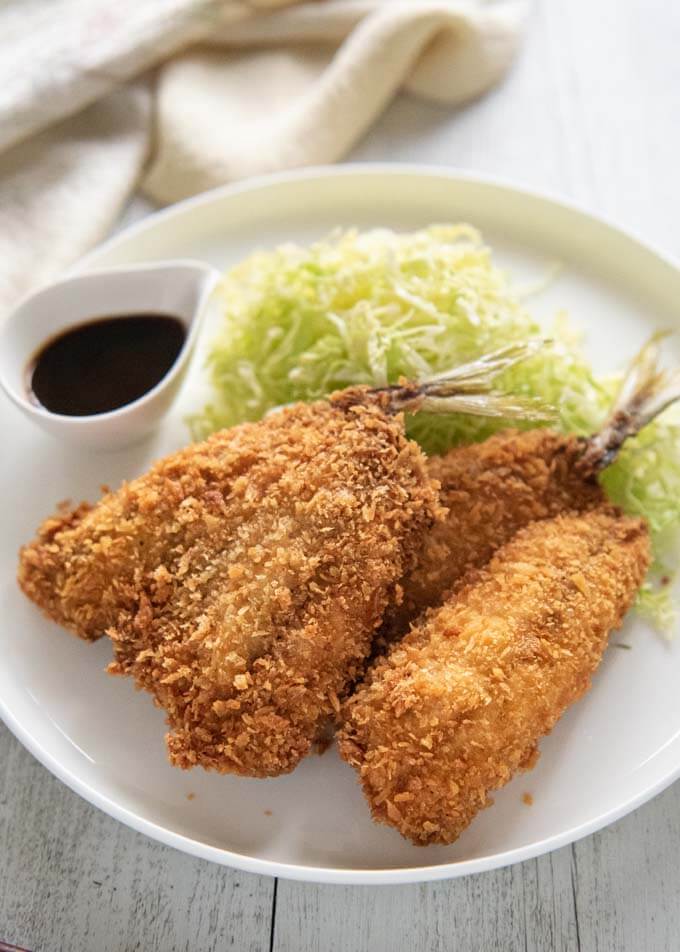 In the early 1980s when I was working at a life insurance company, I told one of my colleagues that I caught a quite few horse mackerels from the ocean and made sashimi out of them. My colleague had a fit because he only knew horse mackerel as fishing bait. I had to educate him about this fish, but I don’t think he wanted to know about it.

Horse mackerel is called ‘aji’ (鯵) in Japanese. It is actually the same phonetic spelling as the Japanese word for taste ‘aji’ (味), but the intonations are different. You need to put the accent on ‘a’ when you pronounce it as fish. On the other hand, ‘aji’ as taste does not have a strong accent on either of the syllables.

It is said that the reason why this fish is called Aji is because it has a good ‘aji’ (taste). I have to agree with that. 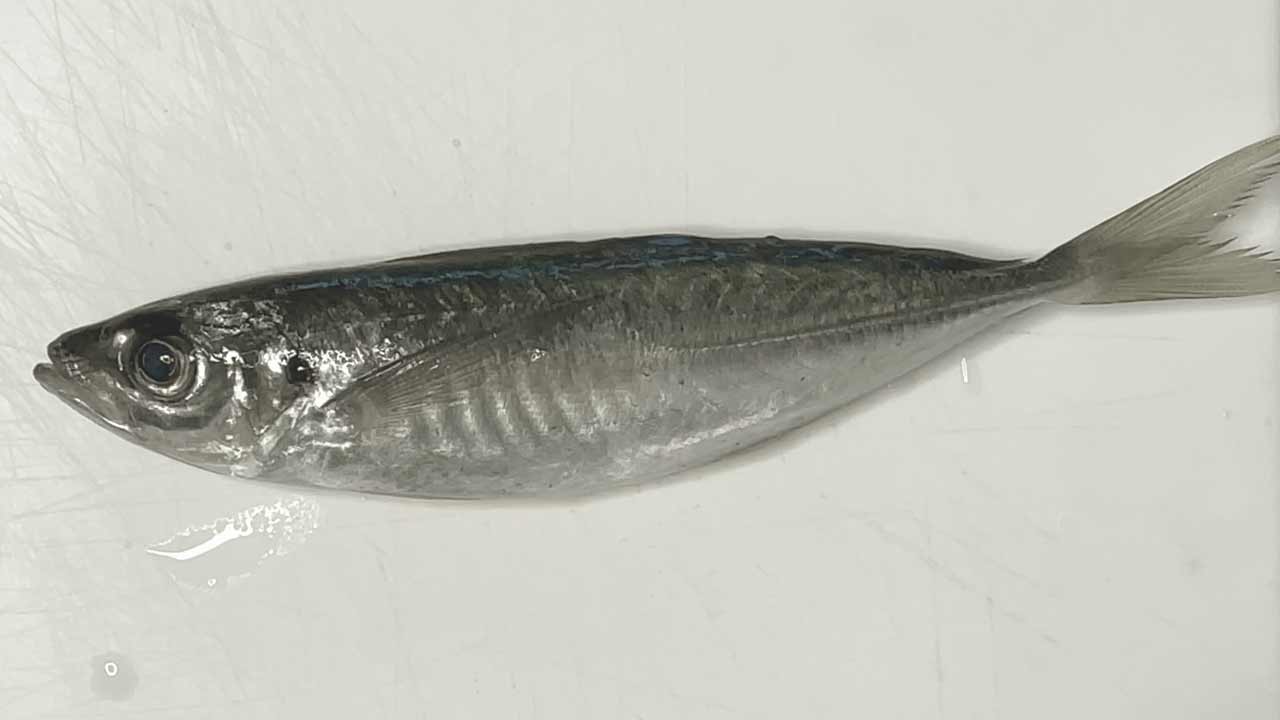 Aji Fry (鯵フライ) is classified as yōshoku (Western-style food). In the early Meiji period, the Western-style fried crumbed dishes such as cutlets and croquets were introduced along with breadcrumbs. At the time, they were shallow-fried, just like how we cook cutlets even now. 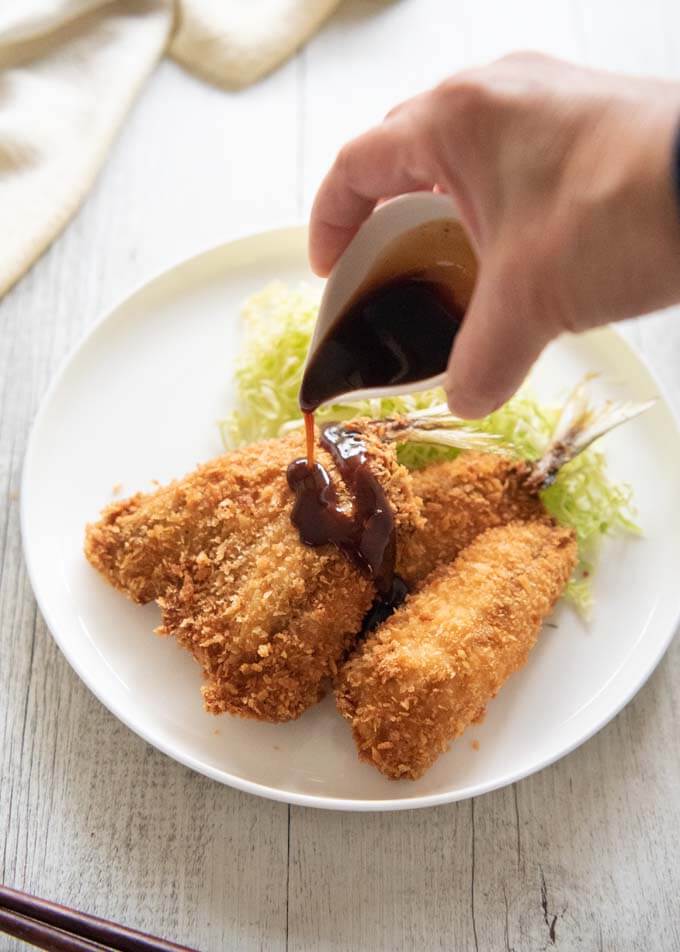 Aji Fry became popular only after WWII, when Japan could produce its own breadcrumbs and sell to the public. It was also served at school meal. Although Aji Fry started as a yōshoku dish, it has almost transformed into washoku (Japanese cuisine) nowadays. According to a survey conducted in 2018, Aji Fry ranked 3rd as the best dish for a bento box.

Apart from the fish as the main ingredient, the list of ingredients are pretty much the same as other Japanese-style cutlets such as Chicken Cutlet and Tonkatsu (Japanese Pork Schnitzel). 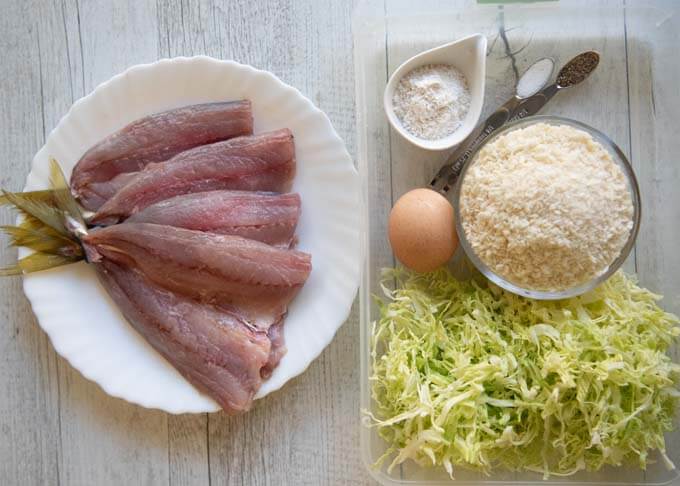 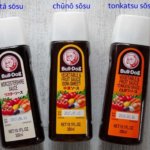 Bull-Dog Tonkatsu sauce on the right.

I used the store-bought Bull-Dog Tonkatsu sauce. Chūnō sauce is good too. If you don’t have it, you can mix Worcestershire sauce and tomato ketchup as an alternative, or just serve Worcestershire sauce. Incidentally, some people eat Aji Fry with soy sauce.

How to Make Aji Fry

The traditional Aji Fry uses a butterflied whole fish, without the head. There is a particular way of butterflying horse mackerel for Aji Fry, and this is the most time-consuming part of making today’s dish. So, I have explained the method with a video in the next section.

Once you have butterflied the fish, the rest is the same as deep-frying any crumbed fish or meat. 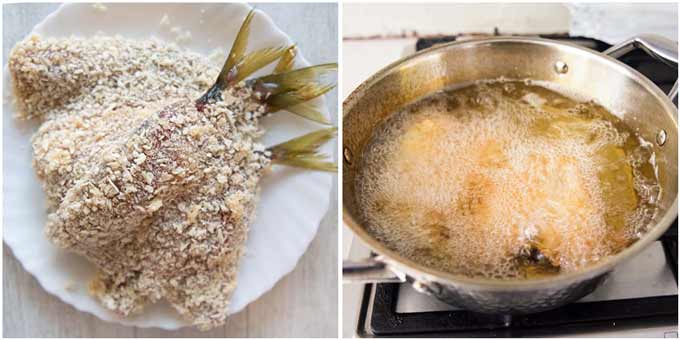 Aji Fry can be frozen for up to 1 month. It is best to freeze them before deep-frying. Thaw in the fridge overnight, then deep-fry.

How to Butterfly Horse mackerel for Aji Fry

There are two ways of butterflying fish – (1) cut along the belly side to open the fish and (2) cut along the dorsal side to open. The former is called ‘harabiraki’ (腹開き) in Japanese and the latter is called ’sebiraki’ (背開き). The word ‘hara’ (腹) means belly and ‘se’ (背) means back. The word ‘biraki’ (開き) is the noun form of the word ‘hiraku’, which means open. The sound of the first syllable is changed for easier pronunciation. 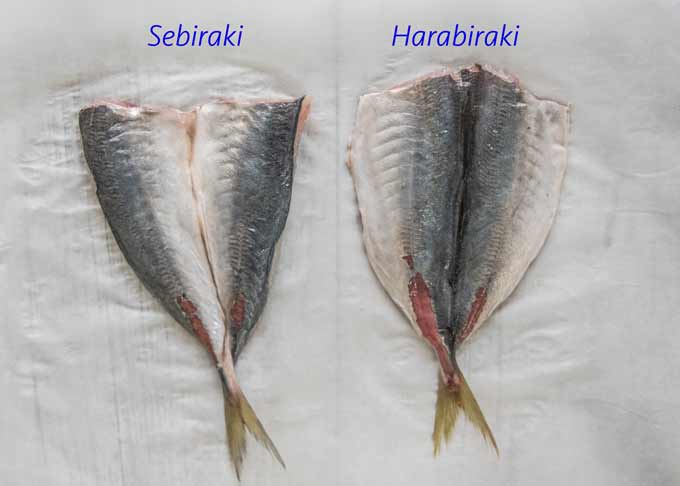 In the case of Aji Fry, you use the sebiraki method so that the thinnest part of the fish, i.e. the belly part, is in the centre and the fleshiest part is on the outside edge.

There are a couple of reasons for that: 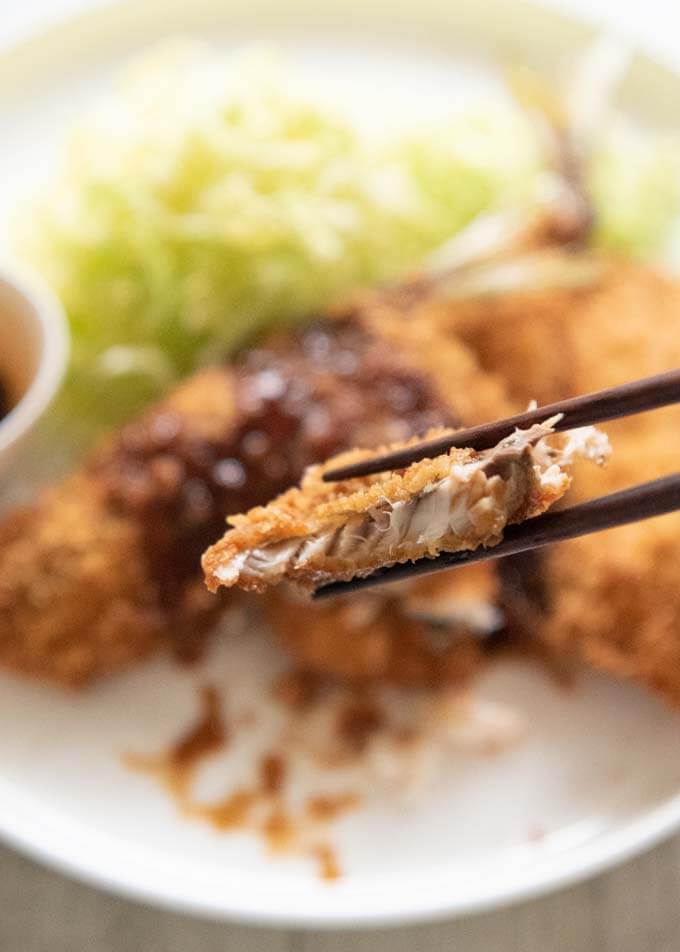 The harabiraki method is probably more commonly used not only in Japanese cuisine but also in Western cuisines. It is more natural to open the belly and remove guts first, then butterfly. It is also easier.

Firstly, you will need a very sharp knife. The major steps are listed here but the video below shows how to butterfly in more detail.

Watch How to Butterfly Horse Mackerel for Aji Fry

The recipe card contains very detailed steps of how to butterfly a fish that correspond to the video. I also attached the step-by-step photo with the instruction numbers.

If this is too difficult for you, you can make two fillets out of a horse mackerel and make two pieces of Aji Fry. The appearance is not the same as the traditional Aji Fry, but it will still be tasty.

Whenever you make fillets out of small/medium fish, be it horse mackerel or whiting as in my post Semi Dried Whiting Fillets, you will be left with back bones with flesh stuck on them. The flesh between the bones is very tasty, so don’t throw them away.  I always make Fish Bone Senbei from them by deep-frying the bones until they become crunchy and golden brown. They are perfect for nibbles and are full of calcium.

Here is how to make Fish Bone Senbei: 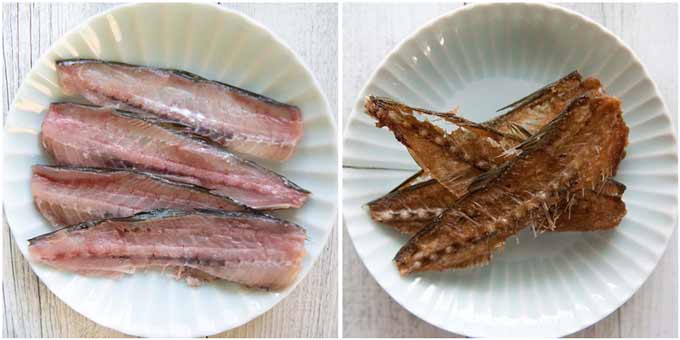 Bones are not chewy but crunchy. They are so good! 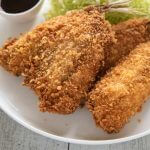 The method of butterflying the fish is unique as it opens the fish from the dorsal side instead of the belly side. This method is called ‘sebiraki’ in Japanese and the very detailed instruction for butterflying a fish is included in this recipe.

2. I used Bull-Dog Tonkatsu sauce as the thick fruity sauce goes well with the crumbed fish. By mixing Worcestershire sauce and tomato ketchup, you can make a similar sauce.

You can of course use Worcestershire sauce or other sauces.

3. You will need a very sharp knife for this. Please also see the video in the post, which shows how to butterfly a fish using the sebiraki method (opening from the dorsal side). 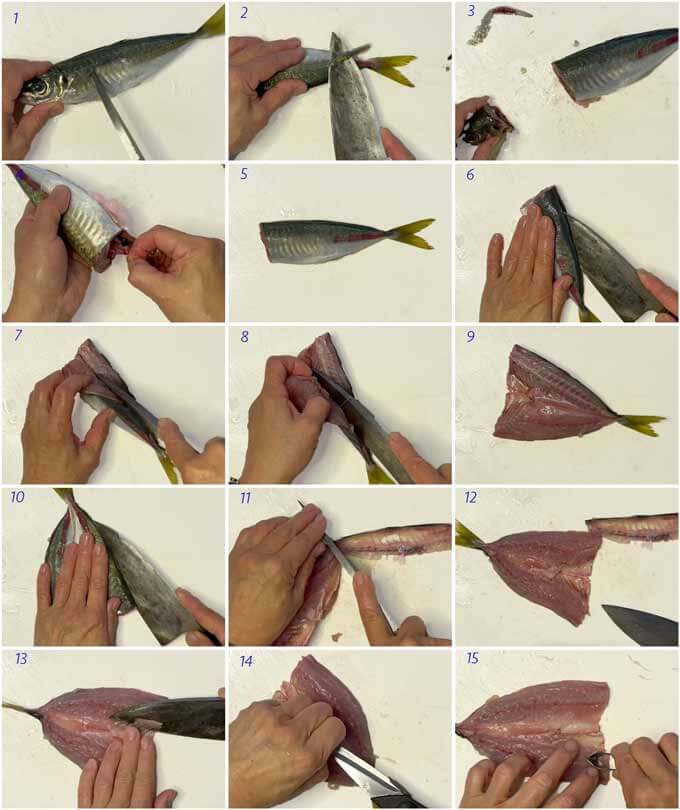 If you find it too hard to make a butterflied fish, you can cut two fillets out of each fish instead. The appearance is not quite the same as the traditional Aji Fry, but it’s still delicious.

4. Do not discard the back bones with flesh on them. You can make crunchy Fish Bone Senbei out of them. Please see the last section in the post for how to make it.

6. If your fish is smaller/larger, the frying time needs to be slightly shorter/longer respectively.

7. Aji Fry can be frozen for up to 1 month. It is best to freeze them before deep-frying. Thaw in the fridge overnight, then deep-fry.

8. Nutrition per serving. It is assumed that the oil absorption rate is 20% of the weight of the fish fillet.

When I serve a deep-fried dish, I always try to match it with something that has a vinegar flavour so that I can cleanse my palate. I picked Konbu Seaweed Salad for that.

Today’s main is a high-calorie dish. So, we need to pick plain vegetable dishes to keep the calories low. My choice is a daikon salad. Daikon contains an enzyme that helps digestion, which is much needed in today’s meal. 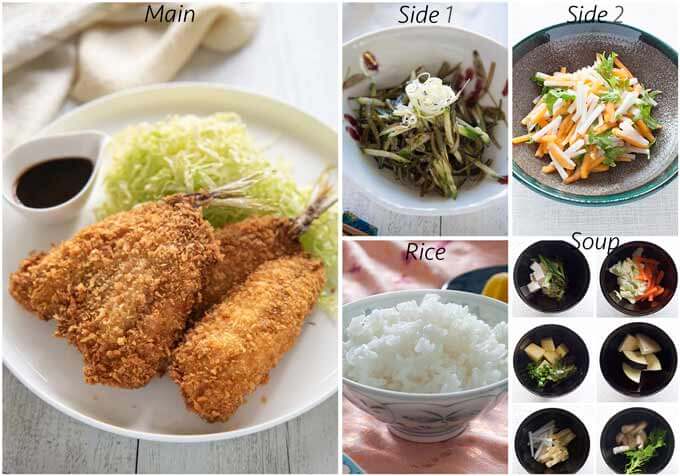