Okonomiyaki is the famous Japanese savory pancake that is usually cooked at the dining table so you can customize it to your taste. My children loved okonomiyaki growing up – actually, they still love it just as much! 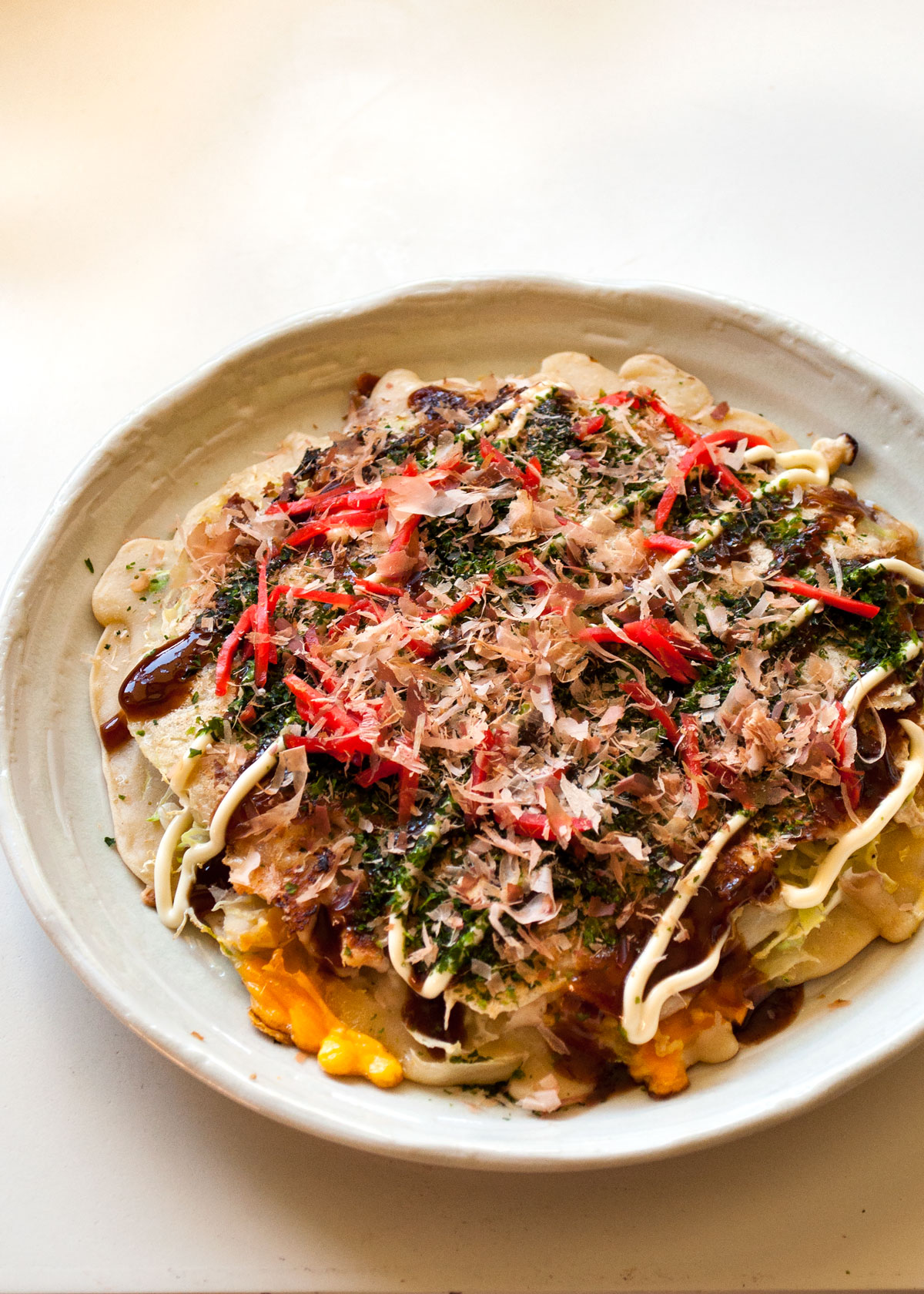 Okonomiyaki (お好み焼き) is a Japanese street food which is very popular among Western visitors who often try it for the first time in Japan. It is a savory pancake with a batter made with loads of shredded cabbage then pan fried with egg, sliced meat and katsuobushi (dried bonito flakes) on top. Finish it off with a drizzle of sweet Worcestershire sauce, mayonnaise and sprinkle aonori (青のり, green seaweed flakes), benishoga (紅しょが, red pickled ginger) and katsuobushi over it to make it a complete okonomiyaki.

The name “okonomiyaki” (お好み焼き) could be translated to “grilled as you like it”. The word “konomi” (好み) means choice/liking and “yaki” (焼き) is “grilled”. The letter “o” (お) before “konomi” is the prefix to make it polite.

As name implies, there are many variations to the ingredients of okonomiyaki and you can use different toppings and eat with different sauces.

Yamaimo is difficult to obtain in Australia and probably in most countries outside of Japan. To come to think of it, the original okonomiyaki did not have yamaimo in it so I am making it just like original version! 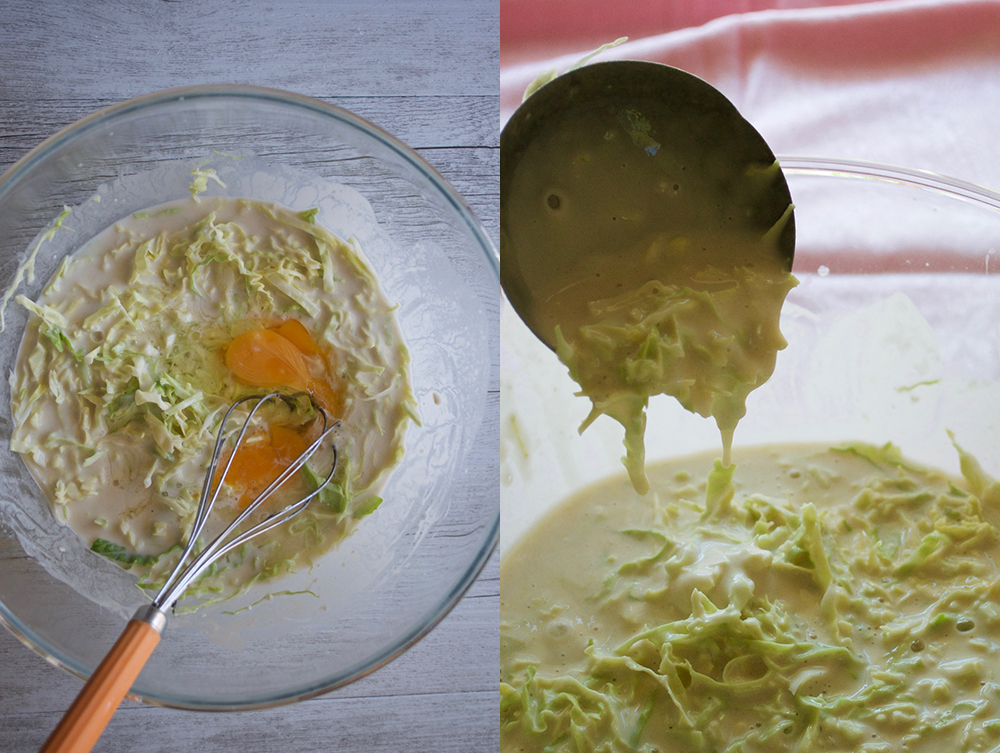 You might have heard that the cooking style of okonomiyaki with the batter mixed with shredded cabbage is called “Osaka style” or “Kansai style”. On the other hand, cooking thinly spread batter without cabbage in it, then add topping including cabbage is called “Hiroshima style”. But if you read the history of okonomiyaki, it actually originated in Tokyo and the cooking style was closer to Hiroshima style.

I remember making okonomiyaki without mixing cabbage in the batter when I was little as I was born and grew up in Tokyo. But I married with a man from Kobe which is part of Kansai region, close to Osaka and learnt the Kansai style. I thought it was better to mix cabbage in the batter so that you can eat a lot of vegies without realizing.

You can add any kind of topping. I used sliced pork as a main topping but you could use sliced beef or chicken. Seafood such as prawns (shrimp), squid, scallops would also be commonly used in Japan. I have tried all of these ingredients and they are superb. Hiroshima is famous for the Hiroshima style okonomiyaki and, you often get oysters as one of the toppings because Hiroshima is also famous for oysters. Modern version of okonomiyaki even has sliced ham, bacon, even cheese as a choice of topping. And of course, you can mix them, too.

It is important to slice the meat thinly so that it cooks quickly and is easier to eat. If prawns (shrimp) are large, I’d suggest that you slice it vertically into two so that the shape of prawns can be retained when placed on top of the batter. I usually prepare squid by slicing into thin strips, scallops into two or three slices.

My okonomiyaki always has an egg in the middle before placing meat/seafood. To make sure that the egg white does not leak outward when placed on top of the batter, I make a well with shredded cabbage so that the egg is surrounded by the cabbage. I then add meat/seafood on top of it. 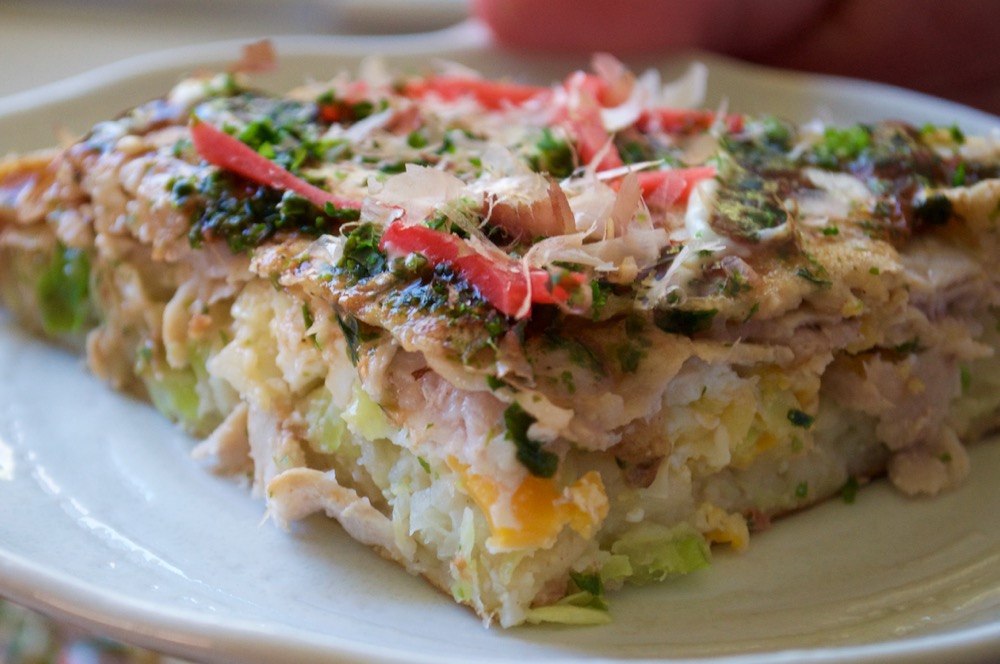 After main topping is placed, I add katsuobushi (dried bonito flakes), then drizzle with some batter so that the toppings are intact when turned over and cooked.

Okonimiyaki is typically served with a sweet/fruity version of Worcestershire sauce. And the sauce needs to be rather thick, not watery. Watery sauce like Worcestershire sauce gets absorbed into the okonimiyaki pancake. So I use the Bulldog brand tonkatsu sauce which is the sweetest and thickest of all in Bulldog brand. You can find more details on Japanese sauces in my post Yakisoba (Japanese Stir Fried Noodles).

Just like the yakisoba sauce, there is a Japanese special sauce for okonomiyaki called okonomiyaki so-su (sauce). I don’t use it but you can of course use it if you like. Okonomiyaki so-su can be purchased at Japanese grocery stores and possibly some Asian grocery stores. If you can’t find any of these, you could mix some tomato sauce/tomato ketchup to Worcestershire sauce as a substitute. 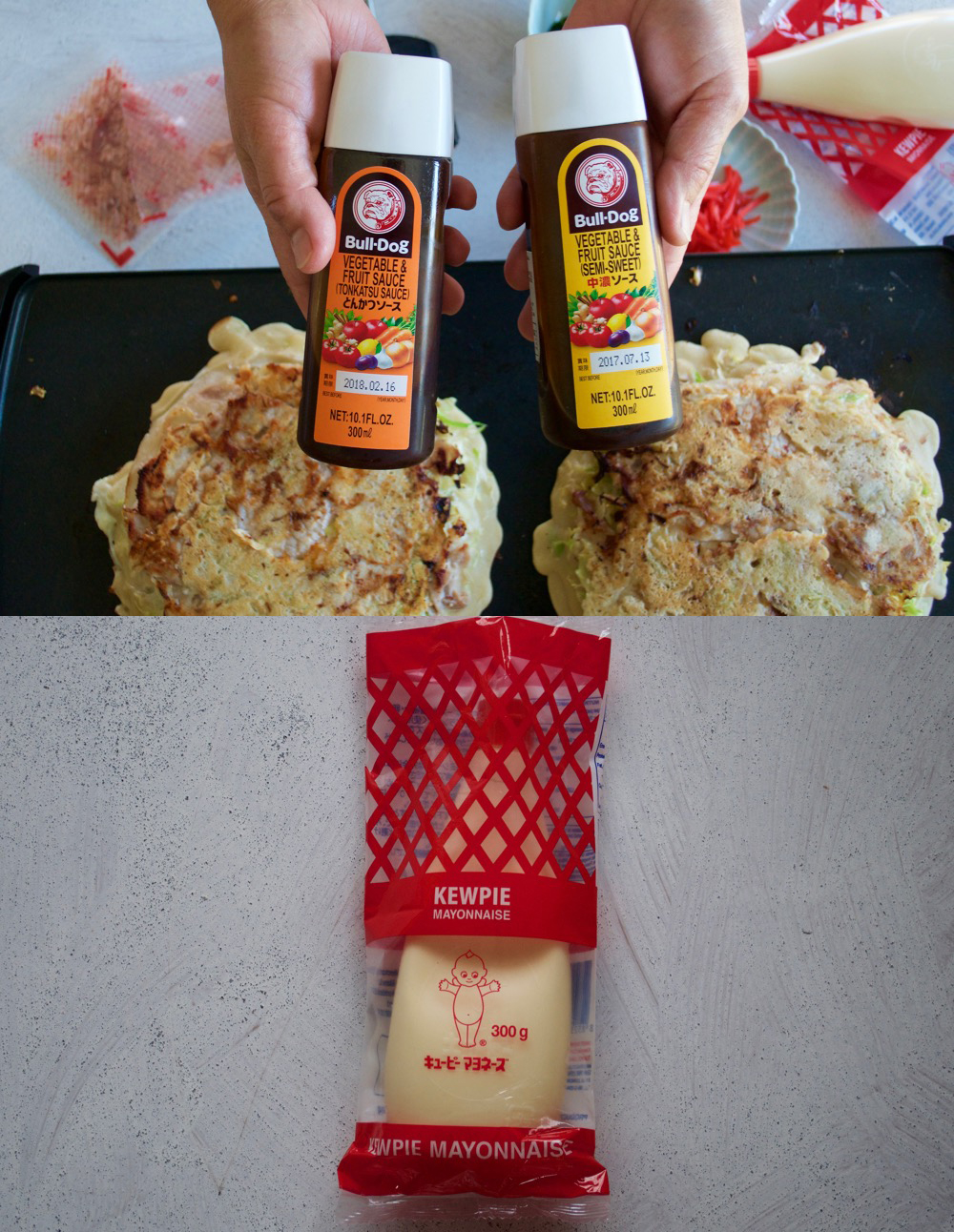 So I initially made okonimiyaki for this post and took many photos without mayonnaise. When I showed my photos to Nagi, the first comment from her was “where is the mayonnaise?”. I said that my okonimiyaki did not have mayonnaise on it and this is my home cooking blog. But she insisted that I should make one with mayonnaise because that is how my children know okonimiyaki  – and probably many readers.

If you say “mayonnaise” in Japan, it usually means Kewpie mayonnaise. It is so popular and widespread in Japan that I am not surprised if every household has a tube of Kewpie mayonnaise in the fridge. When I was little, we ate fresh salad with mayonnaise as there was no concept of French salad dressing at my household 50-60 years ago.

Kewpie mayonnaise is different from Western style mayonnaise and I like Kewpie flavor better simply because it has much milder acidity and contains umami in it.

You can buy Kewpie mayonnaise at Asian/Japanese grocery stores and nowadays even in Coles and Woolworths in Australia.

To tell you the truth, I decided to make okonomiyaki because I had left over aonori and benishoga and three bottles of different kinds of Bulldog sauces from Yakisoba (Japanese Stir Fried Noodles) which I posted few weeks ago. Okonomiyaki garnish is very similar to those used for yakisoba. I even top with extra bonito flakes. Yum! 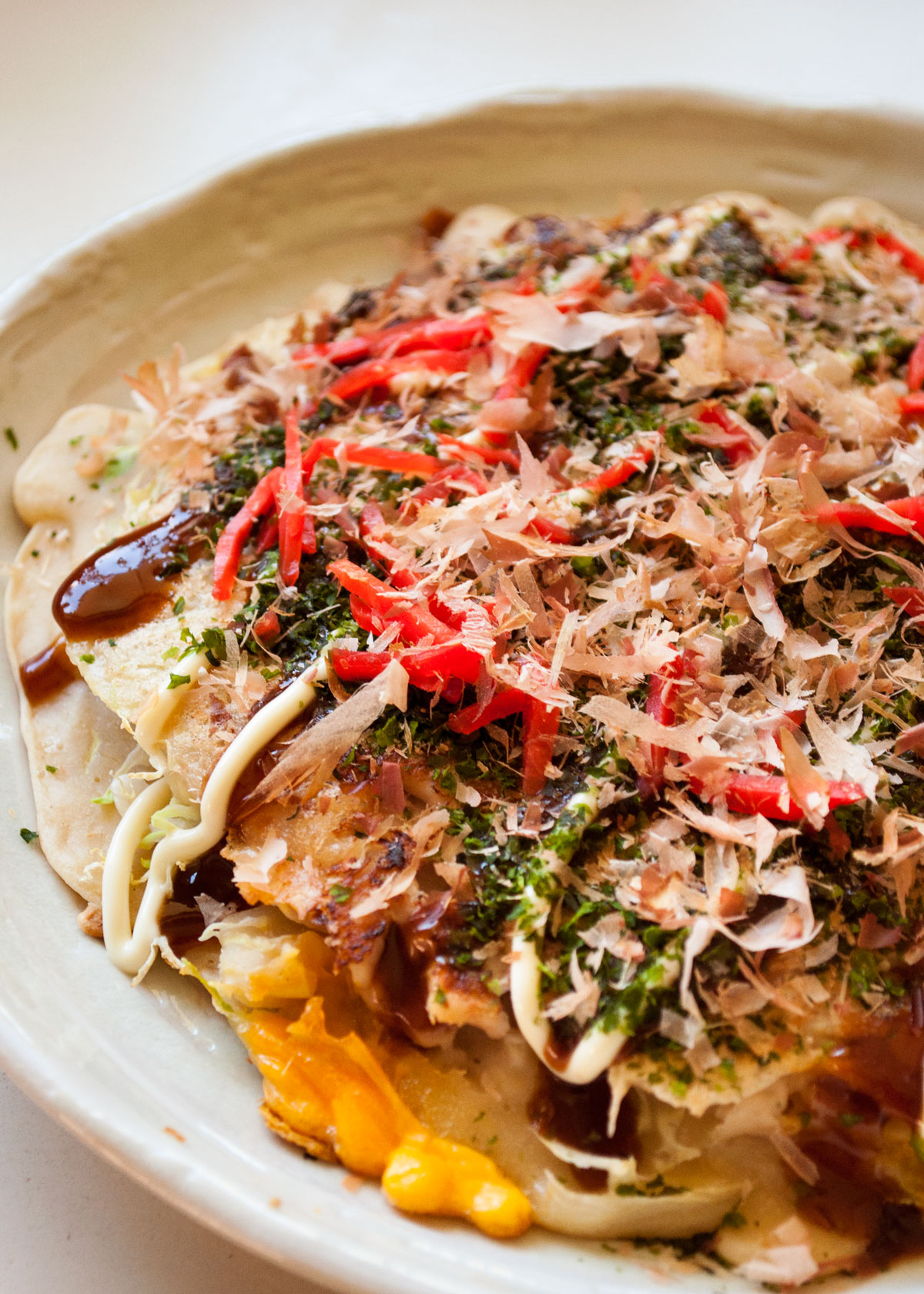 Okonomiyaki is usually made on teppan (鉄板, iron plate) just like street food yakisoba. I  happen to have an electric teppanyaki (鉄板焼き, grilled food on iron plate) plate (photo below) which is perfect to make two okonomiyaki at once.

When children were little, we often had teppanyaki dinner at home with all sorts of meat, seafood and vegetables cooked on teppan. As it was entertaining, they get to eat different vegetables/meats and they can cook themselves. I must post teppanyaki one day. 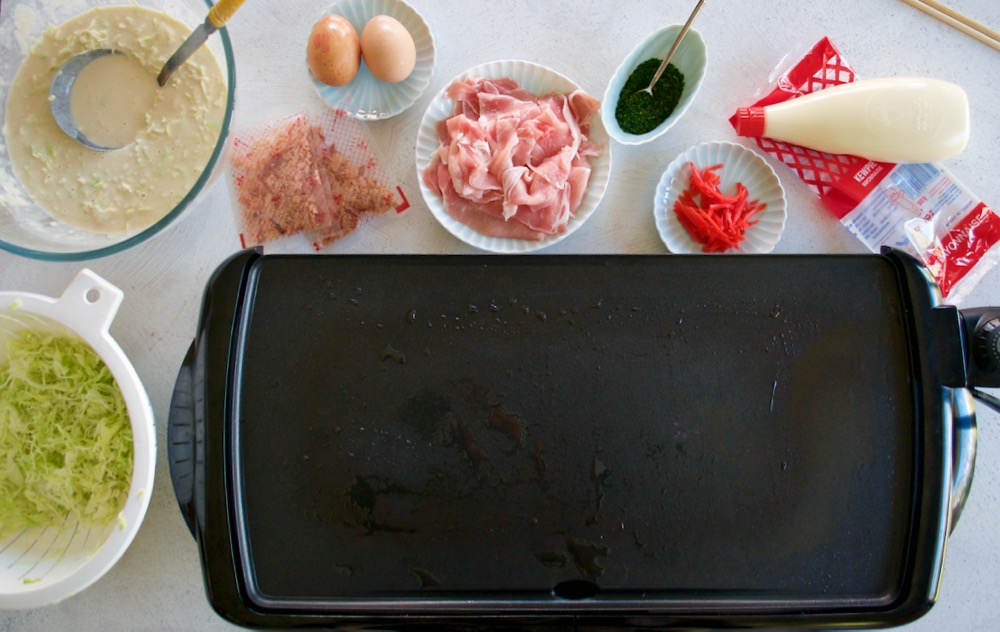 If you have a BBQ set with a flat iron plate on it instead of griddle or grill plate, it would be perfect for okonomiyaki.  But of course you can make it on a fry pan at home like this photo below. 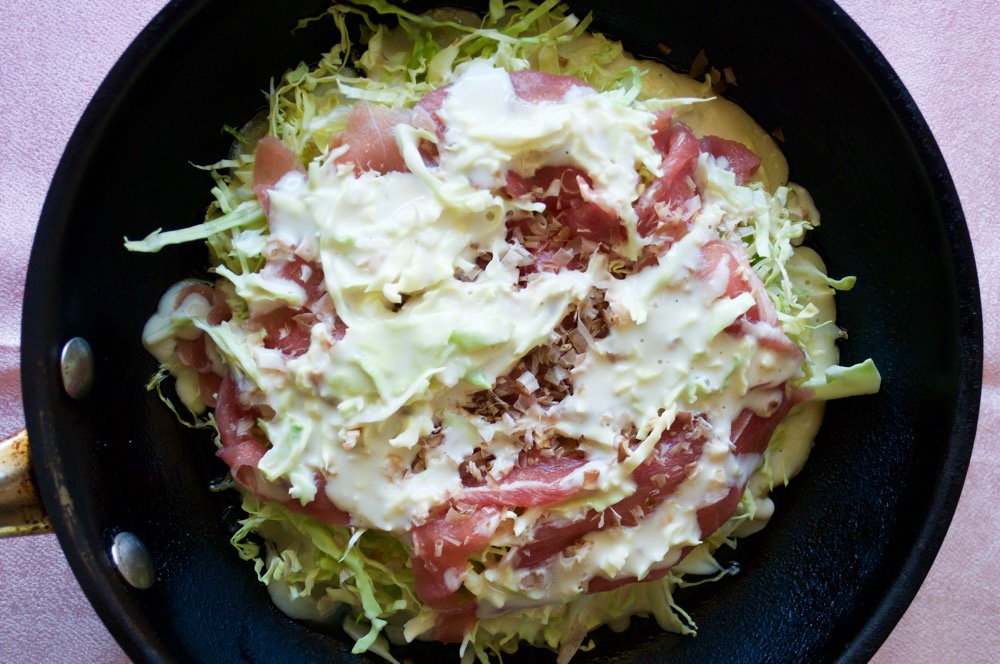 Okonomiyaki is very easy to make once you know the steps to put ingredients on the fry pan or iron plate. No skills are really required because it is part of fun if you mess up. To show you how simple it is, I added step-by-step photos at the end after the recipe. I used my electric teppanyaki plate for that.

Print
Okonomiyaki (Japanese Savoury Pancake)
Prep Time
10 mins
Cook Time
25 mins
Total Time
35 mins
Okonomiyaki (お好み焼き) is another Japanese street food, like Yakisoba (Japanese Stir Fried Noodles) which I posted few weeks ago. The batter with loads of shredded cabbage is pan fried with egg, sliced meat, bonito flakes on top. Drizzle sweet Worcestershire sauce, mayonnaise and sprinkle aonori (青のり, green seaweed flakes), benishoga (紅しょが, red pickled ginger) and katsuobushi (dried bonito flakes) over it to make it a complete okonomiyaki. The recipe is to make one pancake at a time but you can make two at once if you have extra fry pan or large iron plate to cook on. Please note that cooking time is the time to cook one okonomiyaki or to cook two okonomiyaki at once.
Recipe Type: Main
Cuisine: Japanese
Serves: 2 pancakes for 2-3 Servings
Author: Yumiko
Ingredients (tbsp=15ml, cup=250ml)
Batter
Topping
Sauce
Garnish (optional but strongly recommended, Note 4)
Instructions
Making Batter
Making the Pancake (One at a time)
Serving (Note 6)
Recipe Notes

1. There is no rule as to which part of pork to use. As long as it is not for stewing, you can use any kind. I sometimes use thinly sliced pork belly.

You could use beef or chicken instead of pork, or mixture if you want. But the meat needs to be thinly sliced.

You could also use seafood such as squid, prawns, scallops. In the case of squid, I find that slicing it into thin strips work the best. You may also want to slice prawns and scallops thinly if they are large.

2. Bulldog brand tonkatsu sauce is available at Asian/Japanese grocery stores. It is like a thick sweet Worcestershire sauce. You could also buy sauce specialized for okonomiyaki at Japanese grocery stores if you wish. Okonomiyaki sauce is sweeter and less spicy than Tonkatsu Sauce. As a last resort, you can substitute with a mixture of Worcestershire sauce, tomato sauce/ketchup and sugar (2:2:1 ratio respectively).

3. This is Japanese mayonnaise which is quite different from Western style mayonnaise. It has less acidity in it and the flavor is enhanced with umami. You can buy Kewpie mayonnaise at Asian/Japanese grocery stores and sometimes at super market in Australia.

4. Aonori is dried seaweed flakes and benishoga is red pickled ginger. In the section “About Yakisoba Garnish” in my post Yakisoba (Japanese Stir Fried Noodles), you can find more details of these ingredients.

Although these are optional, I strongly recommend to eat okonomiyaki with them on top as it enhances the flavor of okonomiyaki.

5. The reason for taking a little bit less than half of the total quantity of batter is that you will need a small amount of batter to pour over the topping. You don’t need to be accurate about the quantity. If you took too much for the first pancake, then make the second panbcake slightly smaller. But make sure that you leave a small amount of batter when the batter for second pancake is placed on the pan.

The recipe is to make one pancake at a time but if you are making two at once by using two frying pans, a BBQ iron plate or an electric teppanyaki plate, then it’s easier to equally divide the batter. But don’t forget to leave some to spread over toppings.

6. If you have a hot plate like mine or a portable cooktop which can be placed on the dining table, then you can leave the pancake on the plate or the fry pan, add sauces and garsnishes and turn the heat off. You can then divide the pancake to eat directly off the plate/fry pan which is more fun! 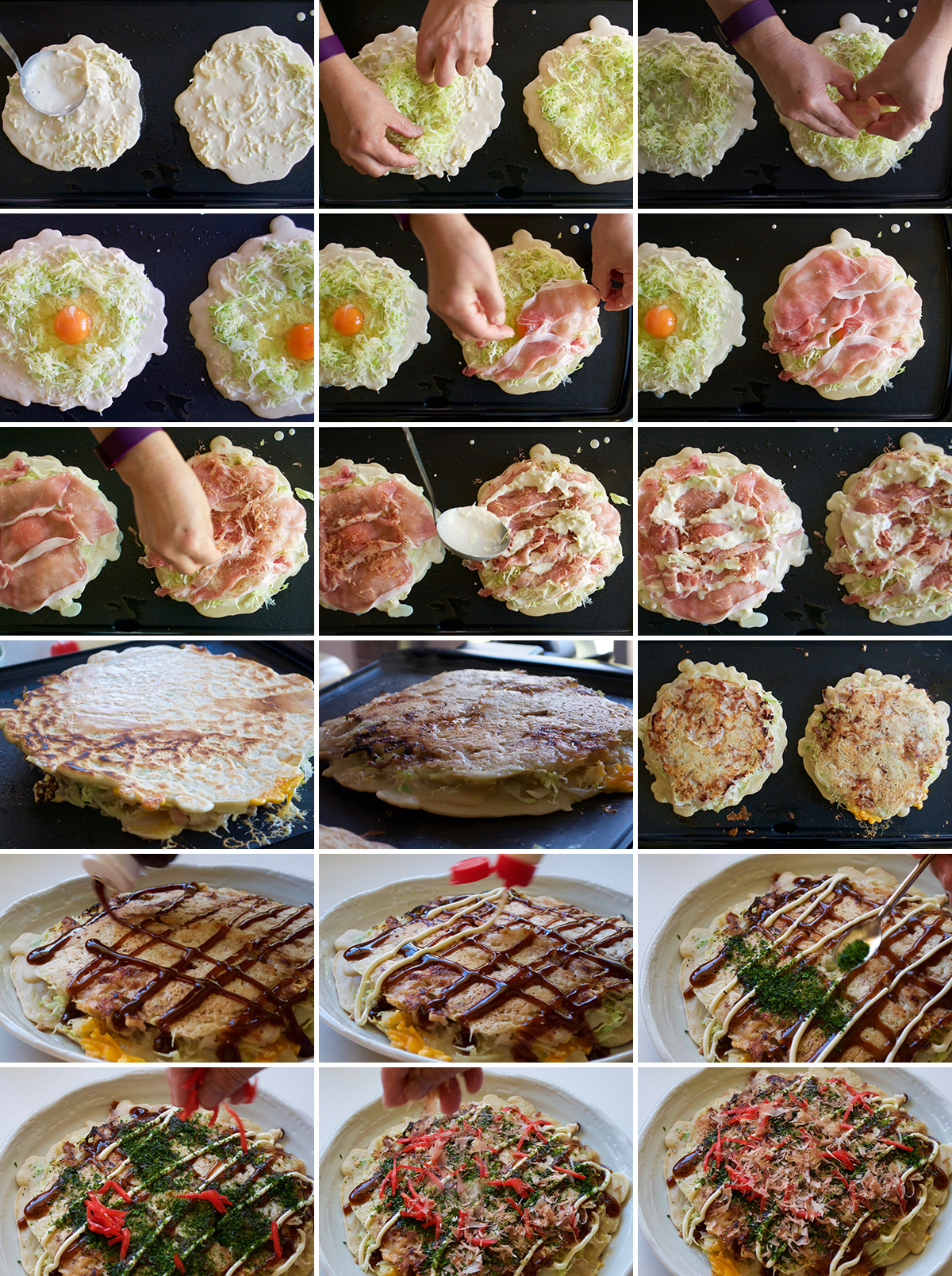