Onsen Tamago is a traditional soft-boiled egg that has runny egg white on the outside and almost hard egg yolk inside. Yes, it is the other way around to the standard soft-boiled egg, where the egg white is hard and the yolk is runny. 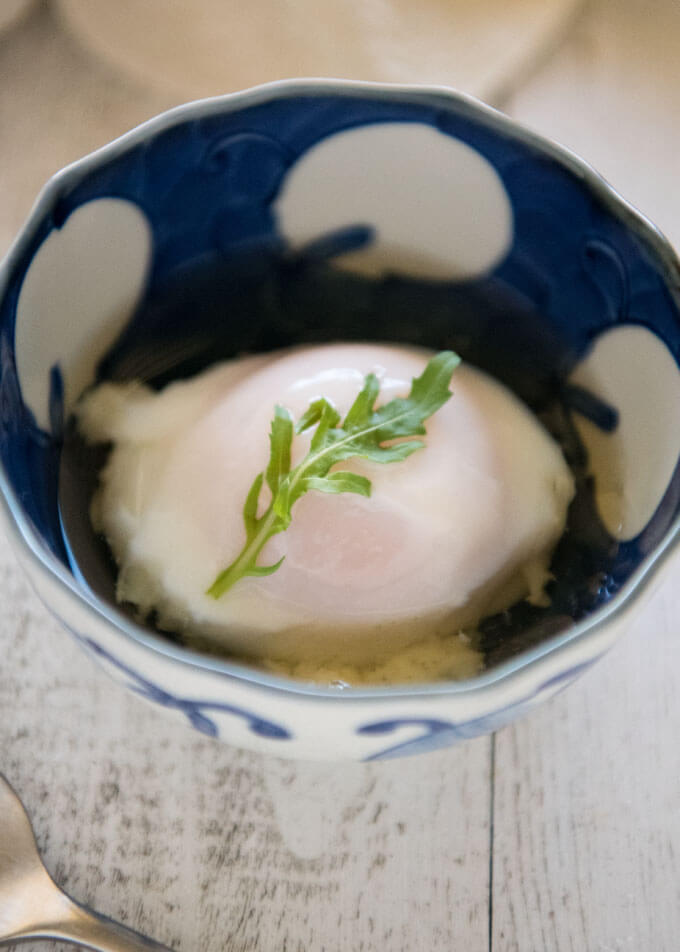 It is quite fascinating to learn the science behind making a soft-boiled egg such as Onsen Tamago.

Before I talk about how the name of this boiled egg came about, I need to explain to you how you can make such a boiled egg – hard inside (yolk), soft and runny outside (white).

This is only possible because of the difference in the temperature at which egg white and egg yolk get hardened. 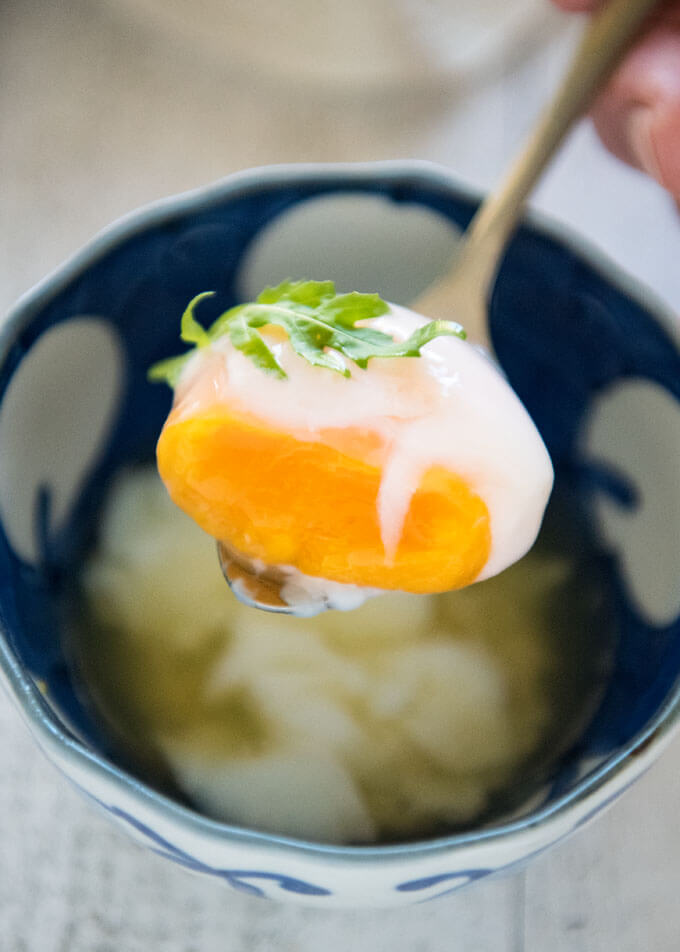 Why is it called Onsen Tamago?

Onsen Tamago (温泉卵) literally means hot spring (onsen, 温泉) egg (tamago, 卵). There are many hot springs in Japan as it is a volcanic island. The temperature of the spring of water that is called ‘onsen’ varies from 25°C/77°F to 98°C/208°F.

Some famous hot spring places such as Nozawa Onsen (where I visit every year) are lucky enough to have the springs that are the perfect temperature for making Onsen Tamago, i.e. around 70°C/158°F.

Village folks come with the bags of fresh eggs and put them in the spring of water to make boiled eggs.

Because the eggs are boiled in onsen, it is called Onsen Tamago. See the photo below where the spring of 70°C/158°F water constantly coming out in Nozawa Onsen. This place is called ‘Ogama’ (麻釜). Only the village people can come in to cook eggs and blanch vegetables. 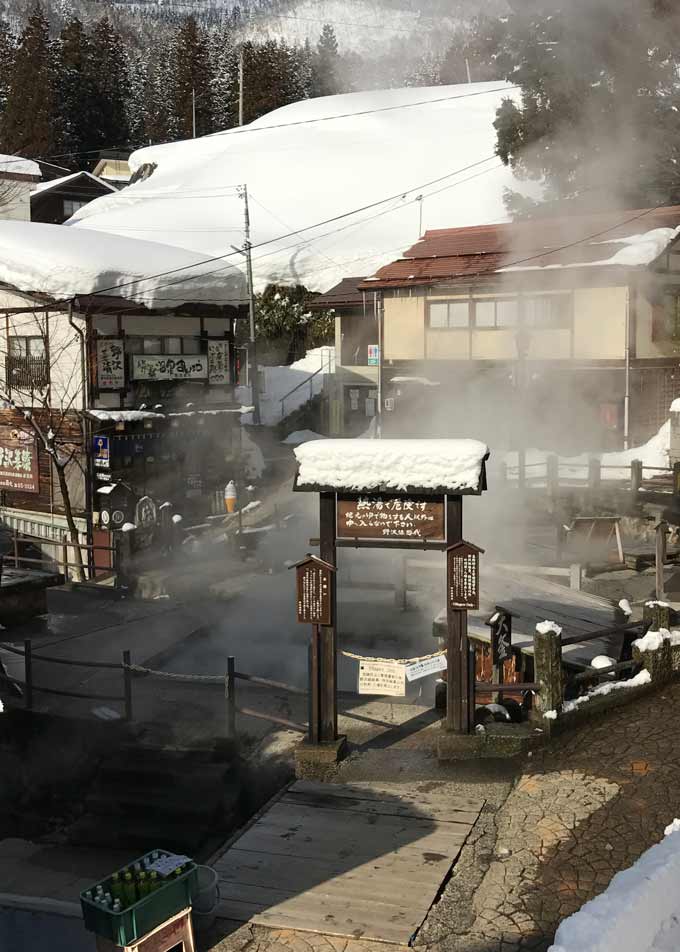 I posted Steak with Japanese Garlic Steak Sauce last week. This dish was a copycat of the steak lunch from Nozawa Onsen ski resort. Nozawa Onsen is also known for Onsen Tamago and my ryokan of course served it in the traditional way at breakfast. I thought I’d better post it while I still have a fresh memory of this delicious dish.

The Temperature is the Key

Based on the scientific facts, it should be simple to make Onsen Tamago – cook eggs at 70°C/158°F for 30 minutes. Right? But it is a bit tricky to make it at home without a 70°C/158°F spring of water, like Nozawa Onsen.

My method is to start at 80°C/176°F hot water in a thick pot and leave the eggs in it with a lid on for 25-30 minutes. The temperature of the water gradually drops and by the time 30 minutes passes, it will average out to the right temperature for Onsen Tamago.

How I Make Onsen Tamago

The steps to cook the eggs in my method are quite simple and require minimal effort, although you need to be accurate.

Note that the method above is suitable for making 4 eggs. If you need to make more or less eggs you need to increase or decrease the cooking time slightly.

Unfortunately, the number of eggs, size of the eggs, type of the pot you use and the air temperature impacts on the speed at which the temperature drops. So it can be trial and error if these factors are quite different from my recipe. 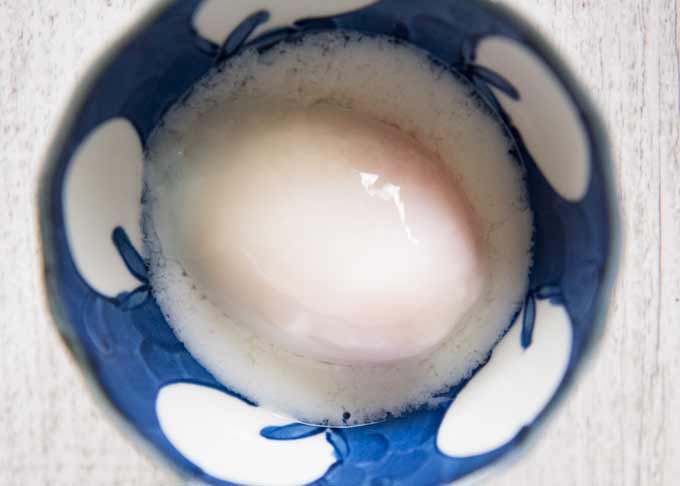 Facts about My Onsen Tamago Making

I don’t usually measure the temperature of the hot water like this, but I thought it might give you some ideas about how Onsen Tamago can be made.

It is one of the most popular egg dishes served in the morning at ryokan (traditional Japanese inns). It is usually served with a dashi-based clear sauce.

The clear sauce is made of dashi stock, cooking sake, mirin, light soy sauce and a pinch of salt. It is served at room temperature or chilled depending on the temperature of the Onsen Tamago.

Crack open the egg shell and drop the egg into a small bowl. Gently pour about 2 tablespoons of the sauce around the egg white. Eat with a spoon. 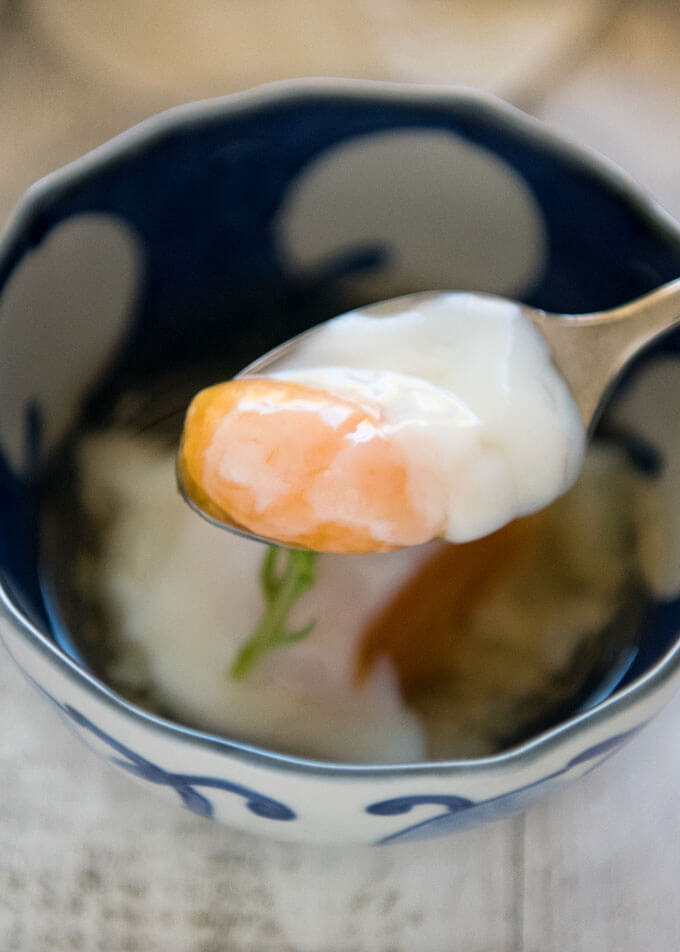 Instead of eating Onsen Tamago in the above-mentioned traditional way, you can serve it as a topping too. For example, place it on top of Gyū-don (Japanese Beef Bowl), Pork Shabu-shabu Salad or even on Japanese Curry (Katsu Curry, Vegetarian Curry). 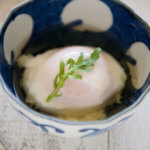 Prep Time includes the time to chill water in the fridge as well as taking the eggs from the fridge to room temperature.

It takes a long time to make Onsen Tamago but you are really not doing anything for most of the 2.5 hours!

2. Leave the water in the fridge for the minimum of 1.5 hours. If you are using tap water, which is not as cold as the chilled water, the quantity of tap water needs to be adjusted. See the table below as a guide.

3. If you are using dashi powder that contains salt, no need to add a pinch of salt.

4. Onsen Tamago is often served with no topping. But I added it for two reasons – to add colour to the dish, and to be able to focus on the centre of the white egg when taking a photo of the dish (Otherwise my camera couldn't focus. It’s true!).

I have not tested 70g+ large eggs. You might think that extending the cooking time by extra 5 minutes should work. But I am not sure about this. Since the temperature of the hot water after 30 minutes becomes 66°C/151°F, leaving the eggs in the water longer than 30 minutes may not cook the egg yolk further. In this case, you may need to start at a higher temperature.

The main has to be a grilled fish and I picked Salted Salmon. For Side 2, I think a simmered vegetable dish would be perfect. Kinpira Gobō often appears at the traditional Japanese breakfast.

Typically, you will also add a small plate of picked vegetables to the meal. I did not include it since I have only 5 dishes in the panel. 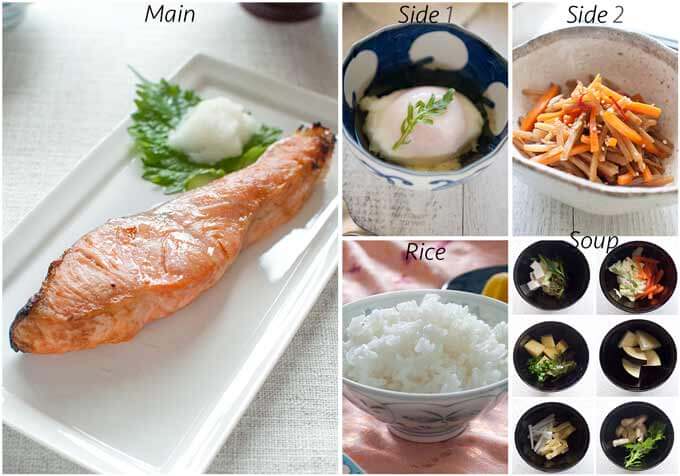