Japanese Beef bowl (Gyū-don) is a popular one-bowl dish that consists of a bowl of rice topped with thinly sliced beef and onions simmered in sweet soy-flavoured sauce. It is often accompanied by red pickled ginger as a topping. It is so quick to make, tasty and filling – a perfect mid-week family meal. 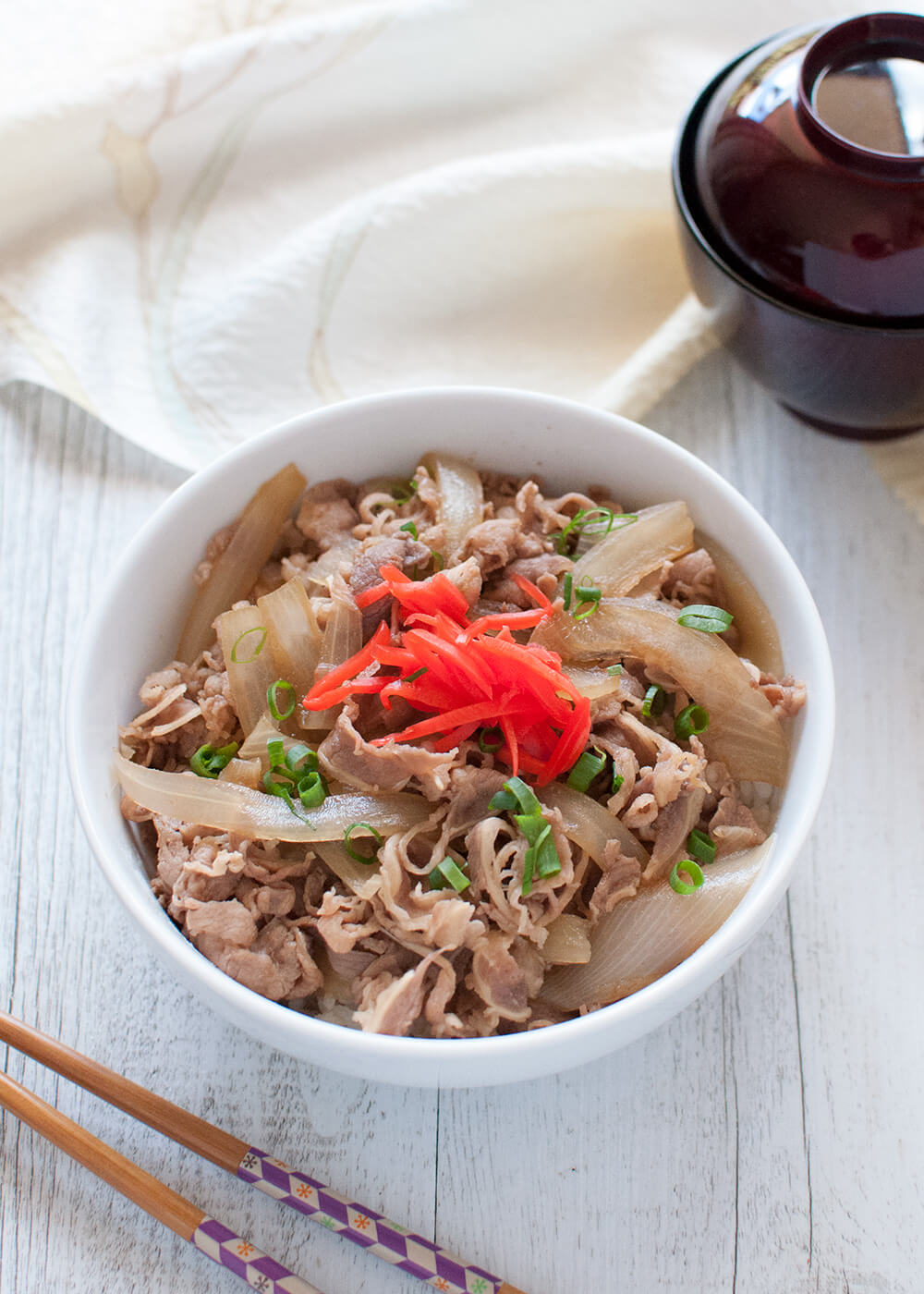 It seems that Gyū-don (牛丼) was developed at the end of 19th century. Its origin is the dish called ‘gyū nabe’ (牛鍋, beef hot pot), which was introduced around 1860. The beef is cut into thick bite-sized cubes and cooked in miso-flavoured sauce with only green onions.

They used miso flavour because at the time beef was introduced to Japan, people thought beef had a strong smell compared to fish, chicken or pork. But the quality of beef improved and so did the smell. Gradually, people started cooking hot pot with soy sauce flavour instead of miso flavour, just like sukiyaki. In fact, sukiyaki was developed from beef hot pot by adding other ingredients such as tofu, vegetables and shirataki (konnyaku yum noodles) – see my post Sukiyaki.

Around the same time, the rice bowl dish became popular as it was quick to make and eat. And that’s how gyū-don was invented, by putting beef hot pot over a bowl of rice. It was originally called ‘gyū-meshi’ (牛飯, beef rice) but the name was changed to gyū-don by the restaurant called Yoshinoya (吉野屋), which later established the famous Japanese fast food restaurant chain specialising in gyū-don, Yoshinoya (吉野家) – same name but different kanji character at the end. 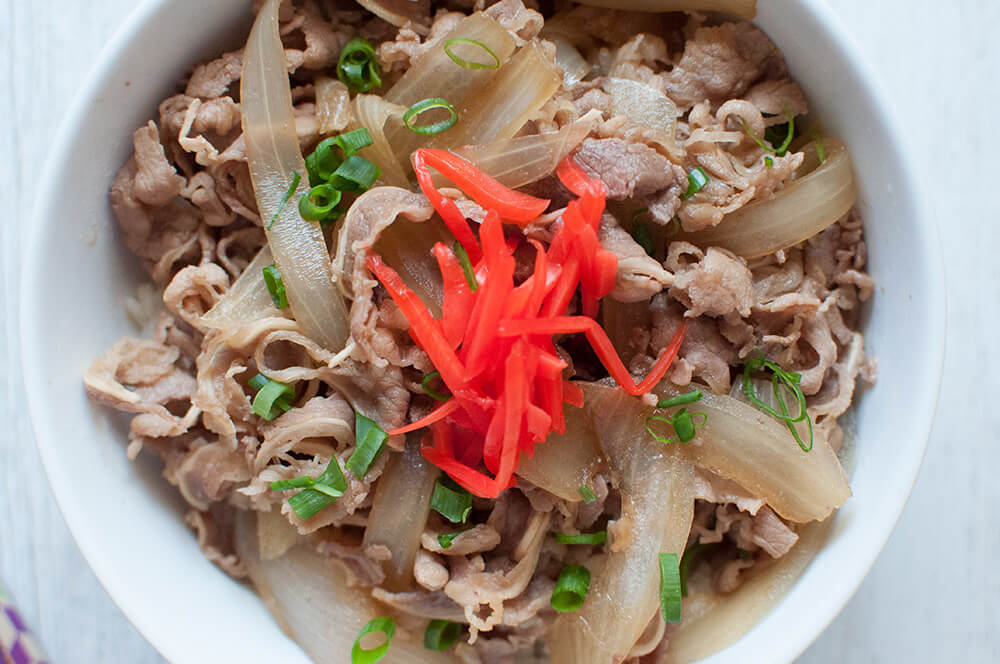 If you have visited Japan, you might have noticed a bright orange sign with black writing 吉野家 and in Roma-ji ‘yoshinoya’. That’s the famous gyū-don restaurant, although they sell other types of rice bowl dishes these days.

The logo of the famous Yoshinoya (吉野家) guy-don chain shop.

Gyū-don is actually considered to be a cheap dish in Japan. Although beef is much more expensive than other meats there, this dish uses thinly sliced cheap cuts to reduce the cost of the dish. That’s probably why it is a popular lunch among the busy office workers. It’s cheap, served fast, quick to eat and filling.

The beef needs to be sliced very thinly and cut into large bite size pieces. I usually buy a pack of sliced beef from the Asian grocery store near my home. Unlike sukiyaki, the beef slices used in gyū-don do not have to be large pieces. The thinly sliced beef pieces below were just perfect as they broke into smaller pieces when cooked. 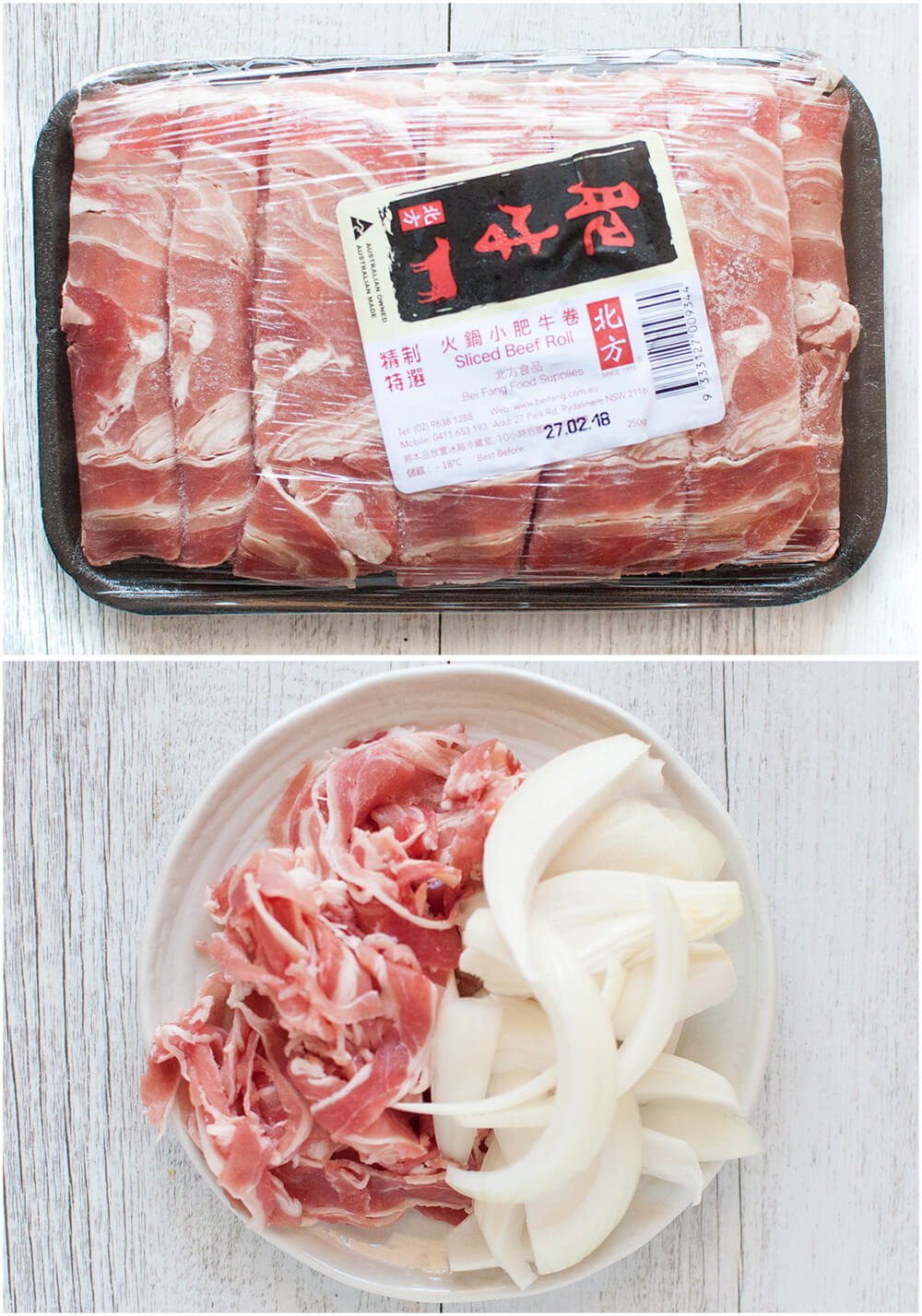 But if you have large slices of beef, simply cut them into bite-sized pieces. If you need to slice the beef yourself, please refer to my post Beef Rolls with Asparagus. You don’t need an expensive cut of beef for this dish but stewing beef is not suited.

Some gyū-don restaurants in Japan offer toppings with shirataki, tofu added to it.  This is almost like sukiyaki on rice. Because the flavour is similar to sukiyaki (but thinner than sukiyaki sauce), it makes sense, I guess. 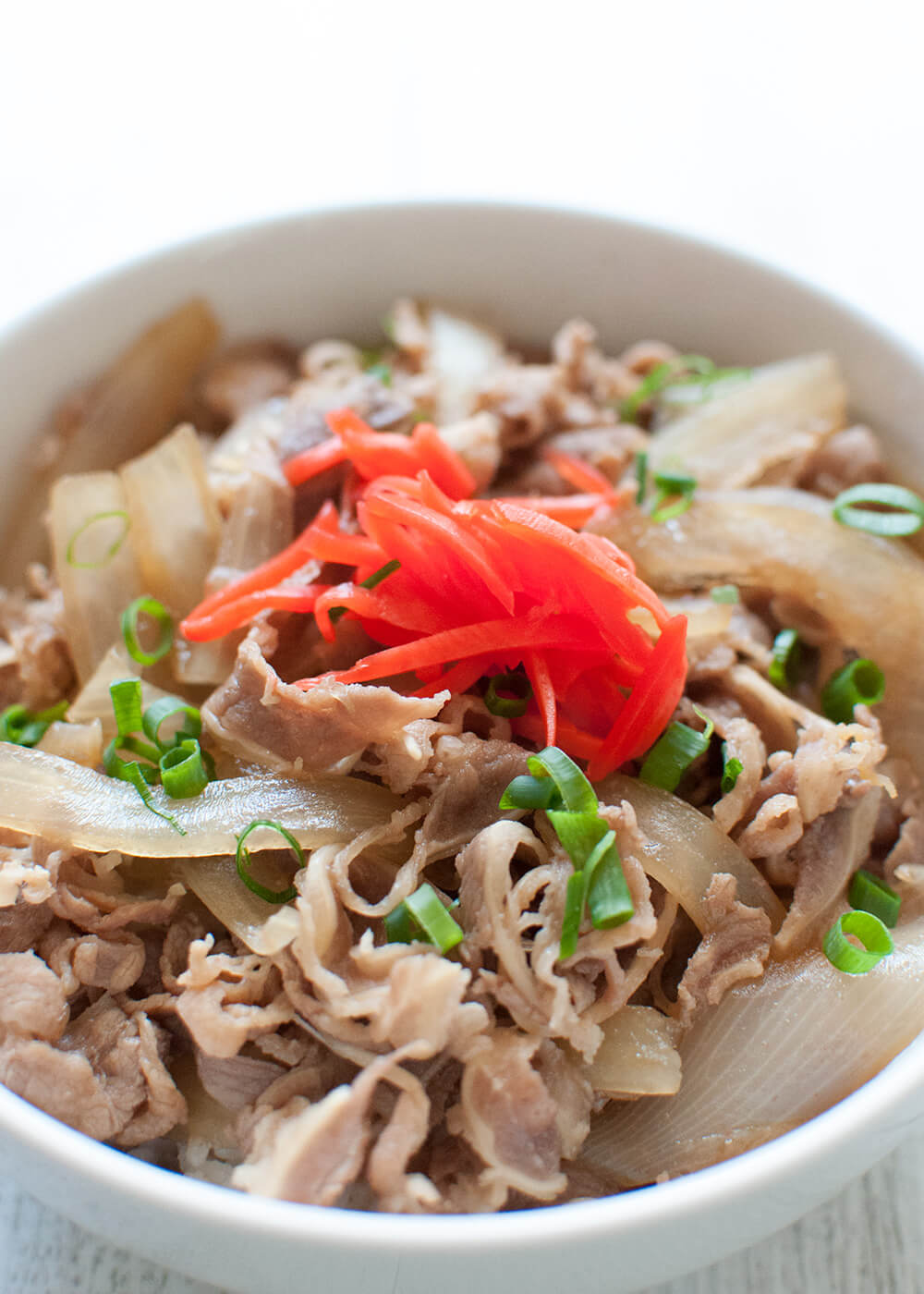 If you order a Japanese beef bowl at a restaurant, it usually is served with a small amount of julienned red vegetables in the centre. They are red pickled ginger strips called ‘beni shōga‘ (紅生姜 or 紅しょうが). ‘Beni’ (紅) means crimson and ‘shōga’ (生姜 or しょうが) means ginger. The garnish served with sushi is also pickled ginger but the pickling liquids are different between these.

It is so fast to cook but you can also pre-cook the beef and onions, ready to pour over the rice and store it in the fridge to serve the next day. Just heat up the cooked beef and onions and place on top of hot rice in a bowl. If you add miso soup and fresh vegetables, it becomes a simple meal for the day. 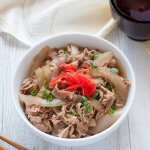 Japanese Beef bowl (Gyū-don) is a popular one bowl meal that consists of a bowl of rice topped with thinly sliced beef and onions simmered in sweet soy-flavoured sauce. It is often accompanied by red pickled ginger in the centre. It is so quick to make, tasty and filling – a perfect mid-week family meal.

1. You can use cheap cuts of beef. When they are very thinly sliced, any cuts other than stewing meat will turn out tender.

You can buy thinly sliced beef at Asian grocery stores. They are not sold as sukiyaki slices and are not so expensive. Beef slices for sukiyaki is also suitable.

You can also make thinly sliced beef yourself, even without a slicer. Please visit my post Beef Rolls with Asparagus which shows how to slice a block of beef.

2. Red pickled ginger is called 'benishōga' (紅生姜 or 紅しょうが). You can buy benishōga in a sealed plastic bag or a small bottle at Japanese/Asian grocery stores. You may even find it at supermarkets.

3. You can make beef toppings ahead of time. Simply re-heat and serve on top of rice.