My Kobumaki (Salmon Konbu Roll) is a rolled konbu (kelp) stuffed with a piece of salmon, and cooked in a sweet soy-flavoured sauce. Kobumaki is one of the Osechi Ryōri (Japanese traditional New Year feast) dishes. It is full of umami and a little bow tied around each konbu roll is so cute. 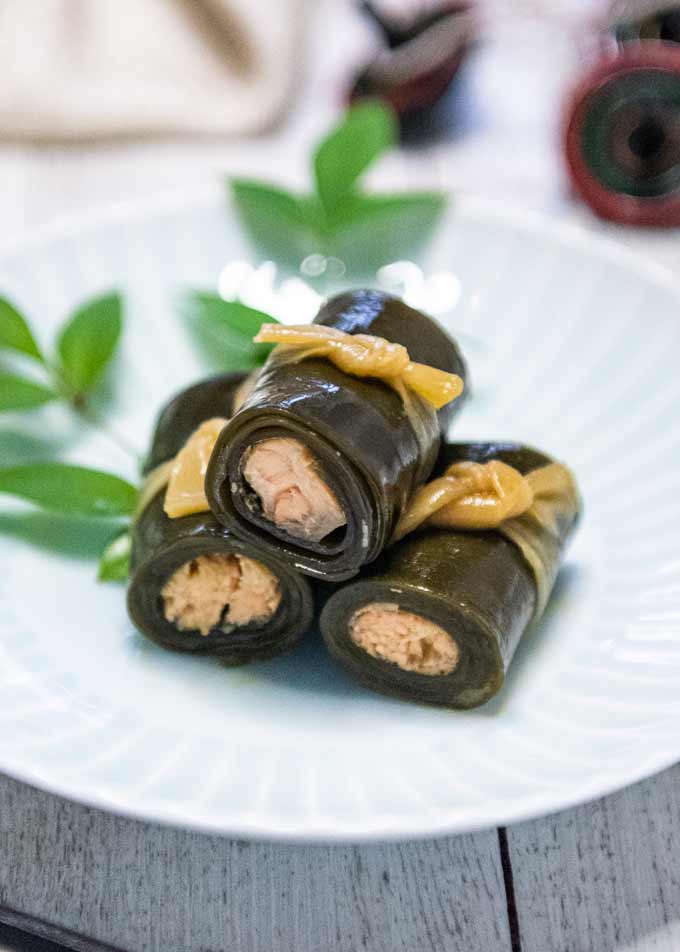 Konbu is considered to be a good luck food and is used on many happy occasions such as weddings and celebratory ceremonies. I used a piece of salmon as a filling, but you can use different ingredients for fillings. If you use vegetables  such as carrot and burdock as a filling, you can make a vegetarian Kobumaki!

Osechi Ryōri consists of many different dishes, each of which has a specific meaning and wish for the coming year.

Kobumaki served at a New Year’s feast is traditionally stuffed with rehydrated dried herring. The Japanese word for herring is ‘nishin’ (鰊), which is interpreted as parents by using a play on words. The name of the salt-cured herring roe is ‘kazunoko’ (数の子) in Japanese and it translates to numerous children.

It sounds like a massive use of plays on words but every single dish in Osechi Ryōri has the secret meanings like this. 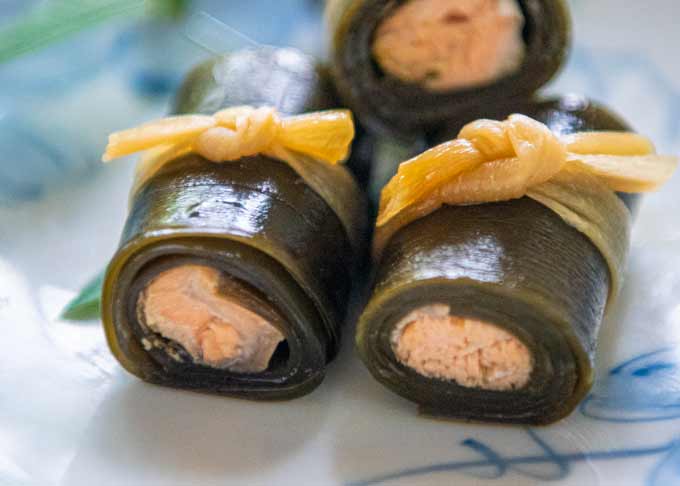 When I was little, almost every household made Kobumaki stuffed with dried herring. But these days, you will see salmon, tuna, king fish, sliced pork, and even vegetables such as burdock and carrot.

The slightly strong, sweet and salty sauce allows the dish to keep for about a week, which also makes it perfect for the New Year’s feast, which lasts 3 days.

Dried herring is not available in Sydney, so I decided to make Kobumaki using salmon as a filling.

I used Hidaka konbu because it is thinner than some other konbu species and it often comes in about 20cm / 8″ long strips. You can buy Hidaka konbu from Japanese grocery stores or possibly from Asian grocery stores. Other brands of konbu are OK too, including Korean konbu.

Instead of salmon, you can use other fish or meat. Or even vegetables as mentioned in the previous section.

Kanpyō is used to tie the konbu rolls. You can probably only get kanpyō from Japanese grocery stores. If you can’t get kanpyo, you can use thin strips of konbu or long dried kiriboshi daikon strips if you want edible strings. Otherwise, you can use strings of banana leaves or butcher’s twine. 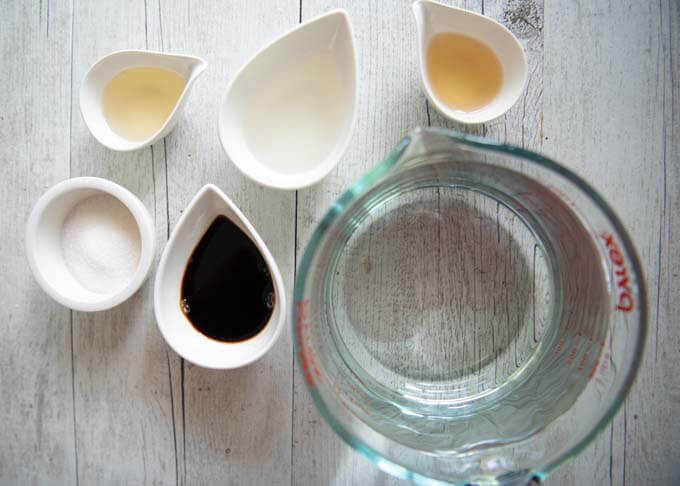 Vinegar makes the konbu tender, just like Nanbanzuke, where even the fish bones become tender.

Since the sauce uses konbu dashi, you can make Kobumaki a vegan dish by changing the filling to vegetables.

Other than making sure that you roll the konbu tightly around the salmon, there is nothing difficult about making Kobumaki. 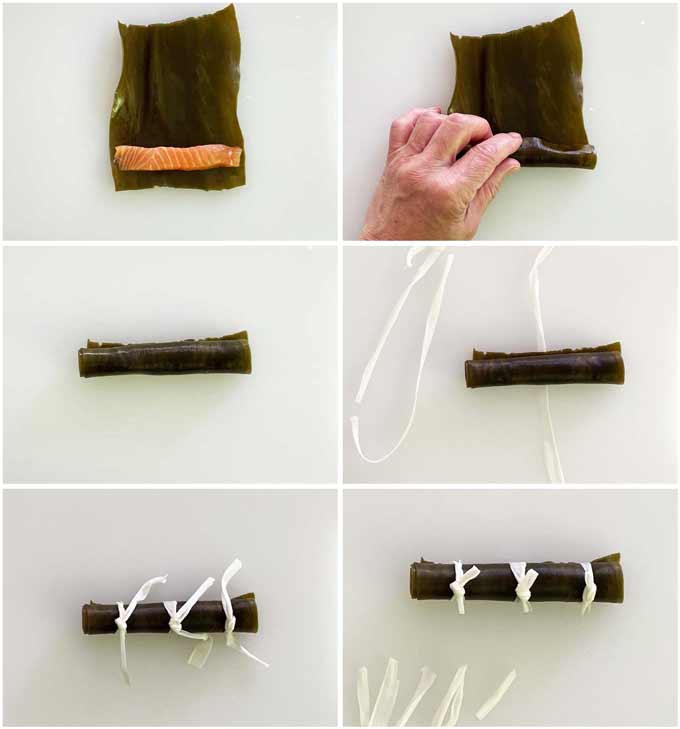 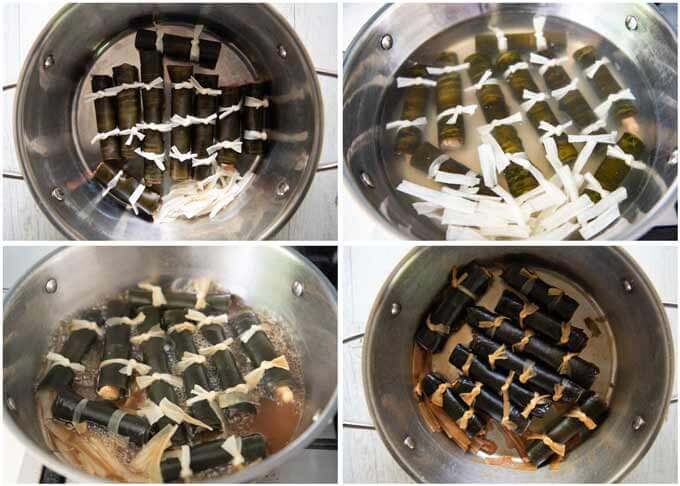 Reducing the sauce determines the flavour strength. I am not fond of overly strong flavours so I tend to finish cooking the konbu rolls with a slight amount of sauce still in the pot (unlike the step-by-step photo above).

If all the konbu sheets came in the same width and length, your life would be easier and the size of your Kobumaki would be all the same.

My konbu came in similar lengths but the width varied. As you can see in the photo above, I had to tie some rolls in two places and some in three places.

You will most likely end up with different sized Kobumaki, but that’s OK for home-cooking. If I were to serve Kobumaki on special occasions, I would try to make all of the Kobumaki the same size.

You can serve Kobumaki either in the way you lay the logs or placing them upright like the photo below. 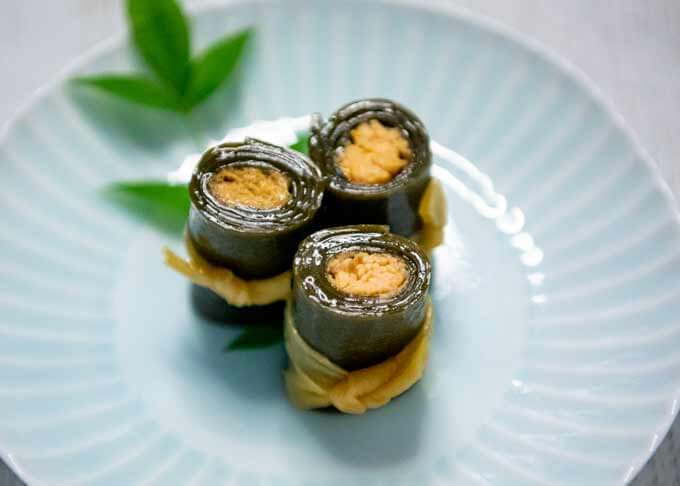 Kobumaki is a perfect side dish for a bento box. You can freeze them too. 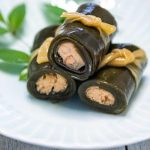 My Kobumaki (Salmon Konbu Roll) is a rolled konbu (kelp) stuffed with a piece of salmon, cooked in a sweet soy-flavoured sauce. Kobumaki is one of the Osechi Ryōri (Japanese traditional New Year feast) dishes.

If you replace salmon with vegetables such as carrot and burdock, it becomes vegetarian.

1. I had 9 sheets of konbu of various widths. It is very difficult to specify exactly how many sheets you get because every sheet of konbu is a different thickness and size. It does not matter even if you have more/less number of sheets.

If your konbu is very long and wide, you can cut it into the required size. If your konbu is narrower than 8cm / 3⅛" after rehydrating, that’s OK. You can use two sheets to make it wider.

2. The quantity of salmon required is also approximate because it depends on how many konbu you have and how wide each konbu is.

3. One pack of kanpyō that I bought included 2 long strings of dried kanpyo. 1 string weighed about 15g / 0.5oz before rehydrating.

The quantity of kanpyō listed is probably more than is required for the number of konbu rolls, but it is better to have too many than not enough strings to tie all the rolls.

Instead of kanpyō, you can use thin strips of konbu or long dried kiriboshi daikon strips. These alternatives are edible. Otherwise, you can use strings of banana leaves or butcher’s twine, but don’t eat them.

4. Since the width of long kanpyō strips is not consistent, you will find that some are wider than others. If the string is too wide, Kobumaki does not look good. Wide string is also harder to make a knot with.

5. If your konbu is narrower than 8cm, place two sheets next each other, overlapping about 2-3cm / ¾-1⅛". When you tie the roll, you need to tie the overlapping area to secure the two konbu sheets.

7. Time taken to reduce the liquid varies depending on the heat, size of your saucepan.

8. Kanpyō bits can be put next to the Kobumaki, if you like. Alternatively you can freeze them, then use as a filling for Sushi Rolls or mix into sushi rice when making Chirashi Sushi.

9. Nutrition per piece of Kobumaki (I made 21 pieces with the above ingredients).

It is nowhere near the entire set of Osechi Ryōri, but even if you are serving just these dishes, you can impress your diners!

Each dish in Osechi Ryōri has a specific meaning or embedded wishes. I added brief meanings against each food. 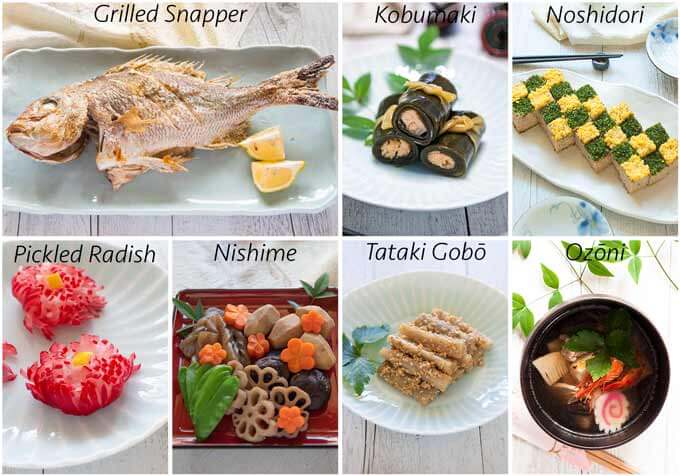