How about a Japanese version of chicken meatloaf decorated with colourful toppings? The meatloaf is flavoured with miso, soy sauce and sugar so it is quite different from the Western style meatloaf. It looks fiddly but actually, it is quite simple to make. Great as finger food or an accompanying side dish for a Japanese meal. 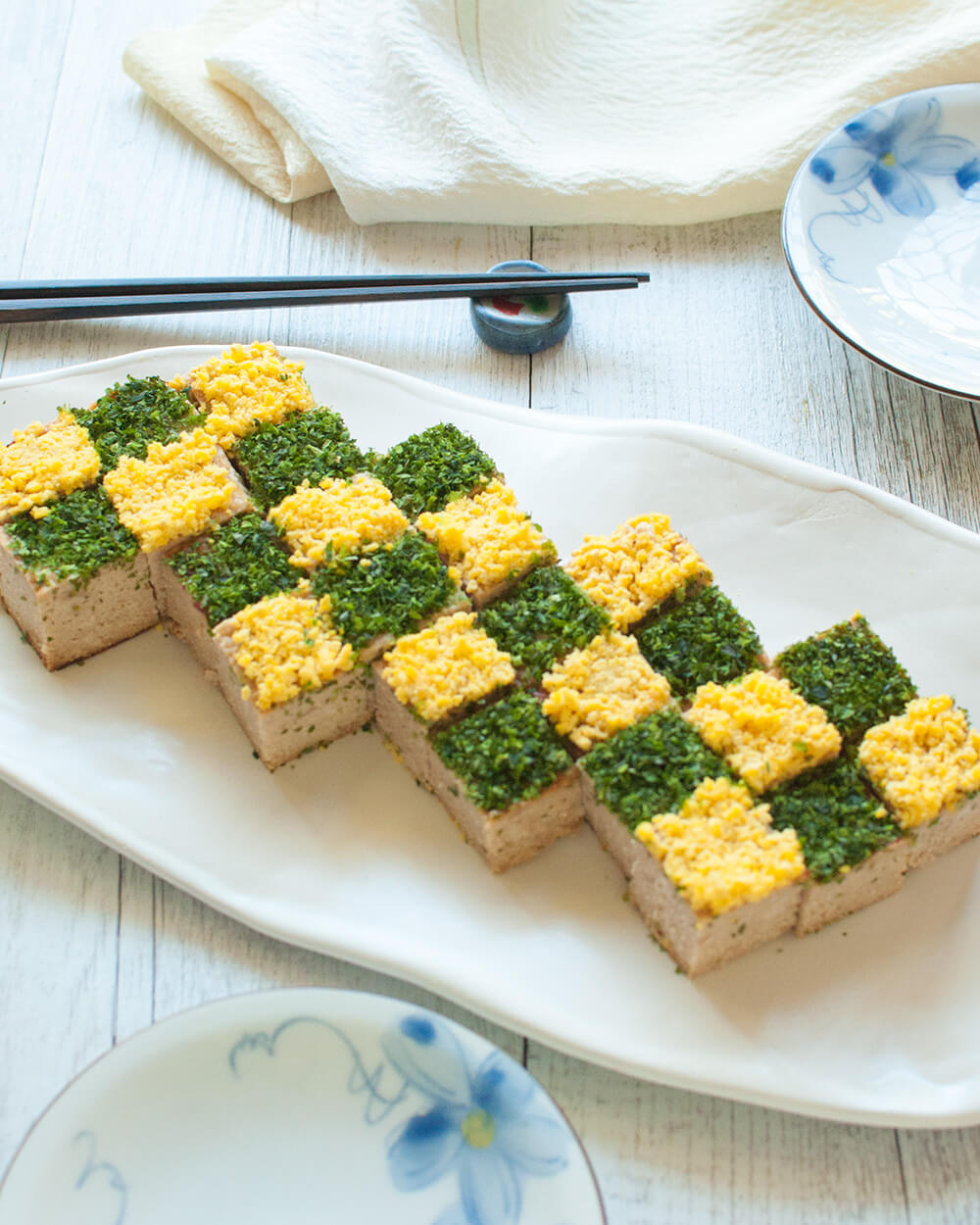 I served Japanese chicken meatloaf last year to my friends after playing golf on Australia Day, 26th January. We played at the golf course near my home so I invited them to come to my place and have drinks and nibbles to celebrate Australia Day. I wanted to post this recipe in January this year but due to my trip to Japan, I couldn’t post it in time. Now the end of the year is not far away so I decided to post this in plenty of time for Australia Day.

I call it chicken meatloaf only because the texture is similar and it is cooked in the oven like the Western style meatloaf. But the flavour is really Japanese and it is very small so it hardly resembles a normal meatloaf.

It is called “noshidori“  (のし鳥) in Japanese and the name came from the way the chicken mince (ground chicken) is spread thinly to make this dish. The word “noshi” (のし) is the adverb form of the verb “nosu” which means spread thinly, usually with a roller or something. The kanji character “鳥” means chicken or bird which is pronounced “tori” on its own but when preceded by another word (“noshi” in this case), it changes the sound to “dori” so that it is easier to pronounce the whole word.

Sorry about the lecture on boring Japanese language. I should talk about the recipe now. 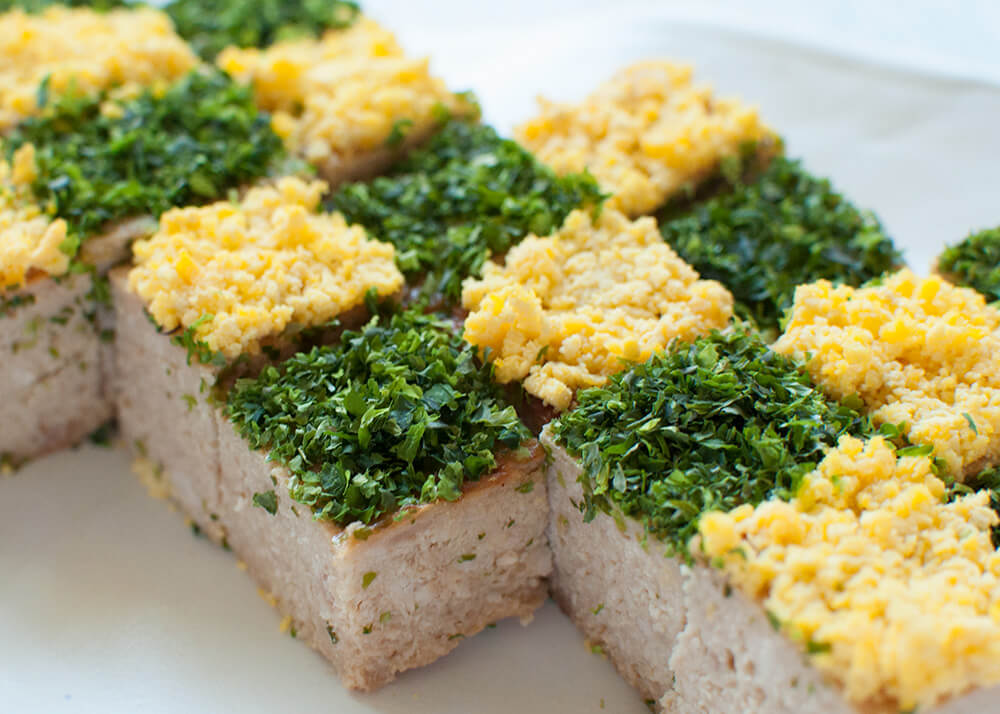 There are two different ways of making noshidori. The first method is to sauté some chicken mince (ground chicken) first, mix with raw chicken and flavouring, then bake it. I used this method today. The other method is to skip the first step of sautéing the chicken and simply mix all the ingredients together and bake it.

I tried both methods and the difference is that the meatloaf made in the first method gives a bit more texture to the loaf because of the pre-cooked chicken mince (ground chicken). The second method gives a consistent smooth texture. It is really up to you as to which method to use, but I liked the chicken meatloaf with texture better.

The chicken mixture needs to be spread into either a square or rectangle shape 2.5 – 3 cm (1 – 1⅜”) thick. The quantity of mince mixture I made in this recipe needs a baking tray of 18cm x 12cm (7″ x 4¾”) with sufficient depth to maintain the right thickness. 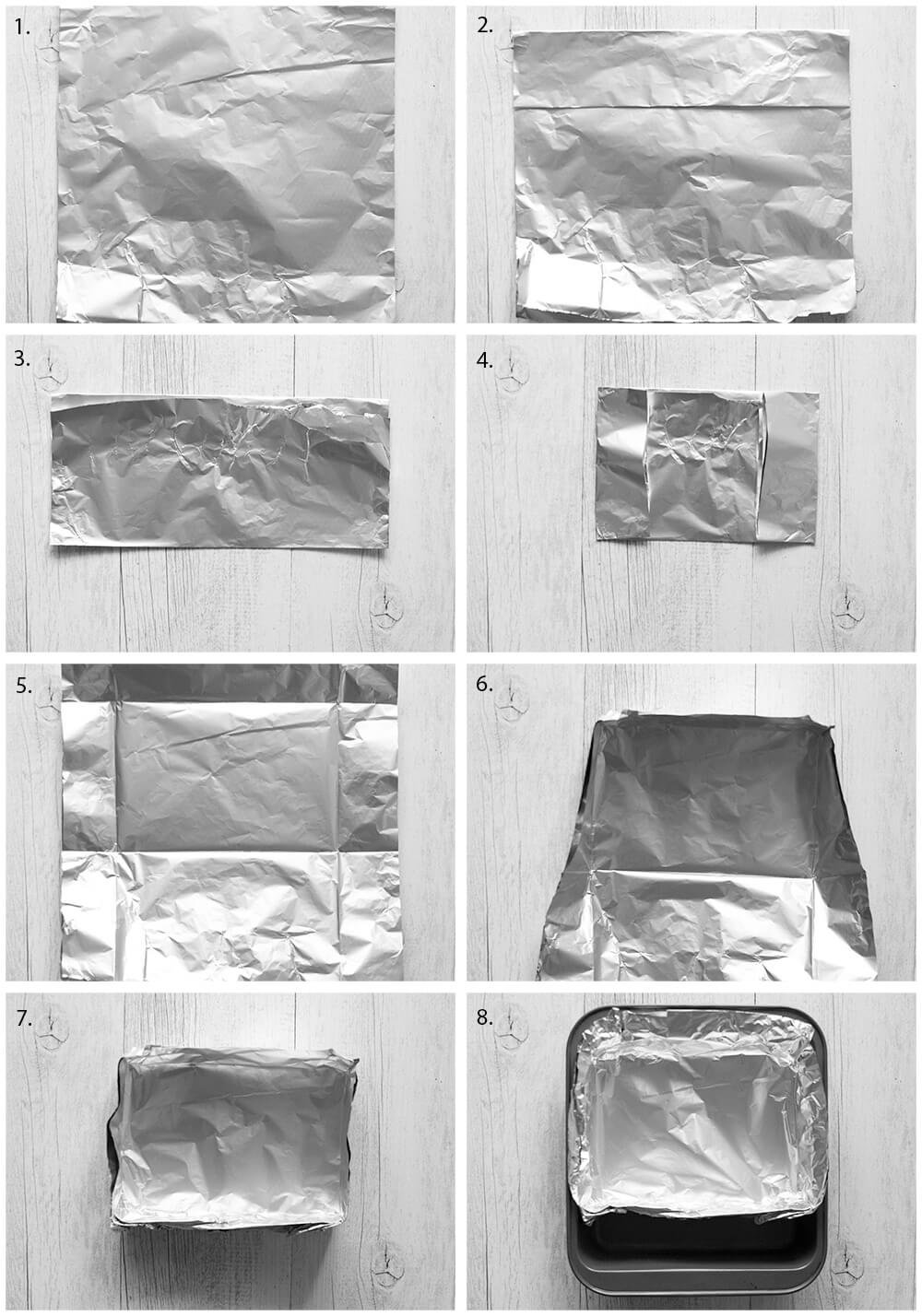 In the case of Western style meatloaf, it is usually served as a main and each slice is rather large. But Japanese chicken meatloaf is always served as an appetiser or a side dish. Also, it is often added to the New Year’s celebration feast.

After cooling down the baked meatloaf, you need to cut it into bite size pieces. You must cool it down before cutting it otherwise the meatloaf tends to break. It is really up to you how large or small the pieces should be, but I decided to cut it into 3cm (1 3/16″) cubes, making 24 pieces in total.

I used two toppings – yellow and green using boiled egg yolk and aonori (dried seaweed flakes, please see my post Yakisoba for details) respectively. Green and gold is the national colour of Australia so it was perfect for Australia Day.

But you can use other toppings. In Japan, white sesame or white poppy seeds with aonori is the most common combination of toppings. 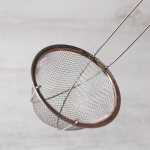 I used this sieve to make granular egg yolk.

Boiled egg yolk is put through a sieve with a bit larger holes than the one used to sift flour so that it makes tiny granular egg yolks. See the photo of my little sieve. Aonori is a collection of tiny flakes so there is no preparation needed.

I said that making noshidori is quite simple and it is true. But decorating it can be a bit fiddly. It is not difficult though.

You don’t make the checkerboard pattern by placing two toppings alternately. That will make you crazy and most likely mess up the lines. 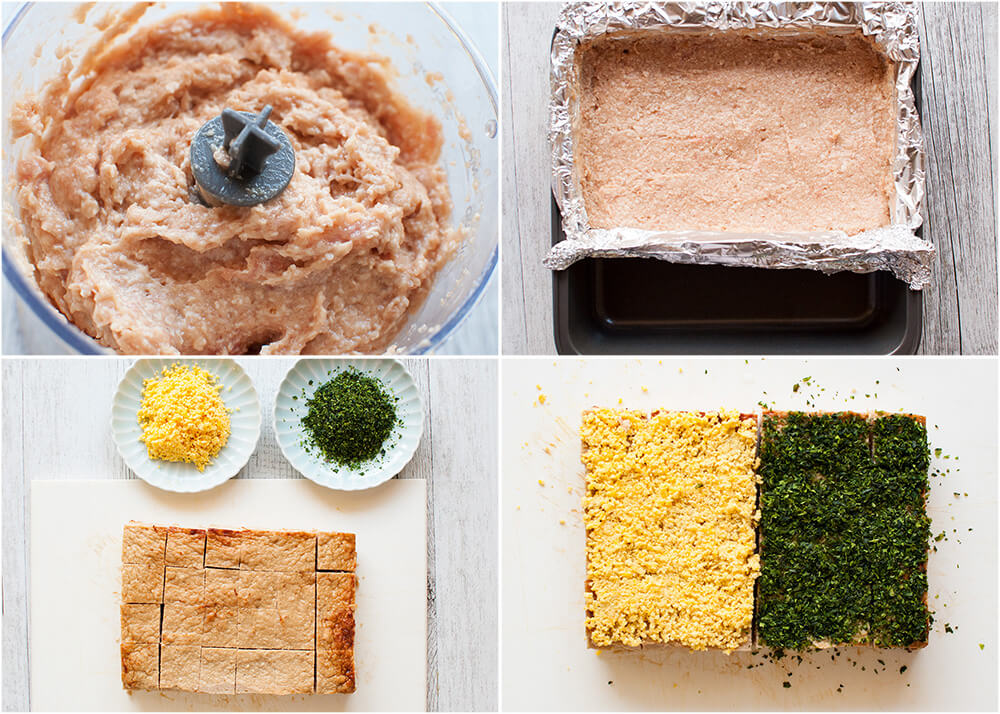 Then you take each piece and place it alternately to make checkerboard pattern. You can place them in any way you like but don’t you think they look pretty? The flavour is great, too! They keep about 4 days in the fridge. 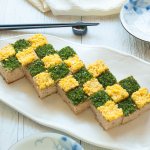 Noshidori is a Japanese version of chicken meatloaf decorated with colourful toppings. The meatloaf is flavoured with miso, soy sauce and sugar so it is quite different from the Western style meatloaf. It looks fiddly but actually, It looks fiddly but actually, it is quite simple to make. Great as finger food or an accompanying side dish for a Japanese meal.

Recipe Type: Appetiser, Side
Cuisine: Japanese
Serves: 4 as a side, 8-12 as appetiser
Author: Yumiko
Ingredients (tbsp=15ml, cup=250ml)
Toppings (note 3)
Instructions
Making Chicken Meatloaf
Cutting and Decorating
Making Granular Egg Yolk Topping (do this while the mince is in the oven)
Recipe Notes

3. Toppings can be omitted but I think it looks prettier with colourful toppings. I used yellow and green just because they are the Aussie colours.

But in Japan, the most common topping combination is aonori and either white poppy seeds or white sesame. You could also use egg white and egg yolk so that you can make use of the whole boiled egg.

4. Aonori is also called ‘aosako’. You can buy aonori at Japanese grocery stores and Amazon.

5. To make a box using 2 layers of aluminium foil: Fold 4 sides to make 18cm x 12cm bottom. Open the folded sides 90 degrees to make walls on four sides, pinching the corners and folding it to one side. Please see the step by step photos in blog.

7. Stick a thin bamboo skewer into the middle of the meatloaf and remove it. If the skewer is clean and not sticky, the meatloaf is cooked through.

9. Noshidori keeps about 4 days in the fridge. This is one of the reasons why it appears in the New Year's celebration feast as the same foods are served for a couple of days.