Sushi rolls are becoming a popular healthy take-away food in Australia. Most of them are made as large thick rolls, but the sushi rolls made at traditional sushi restaurants are thin, tiny rolls just perfect for finger food. 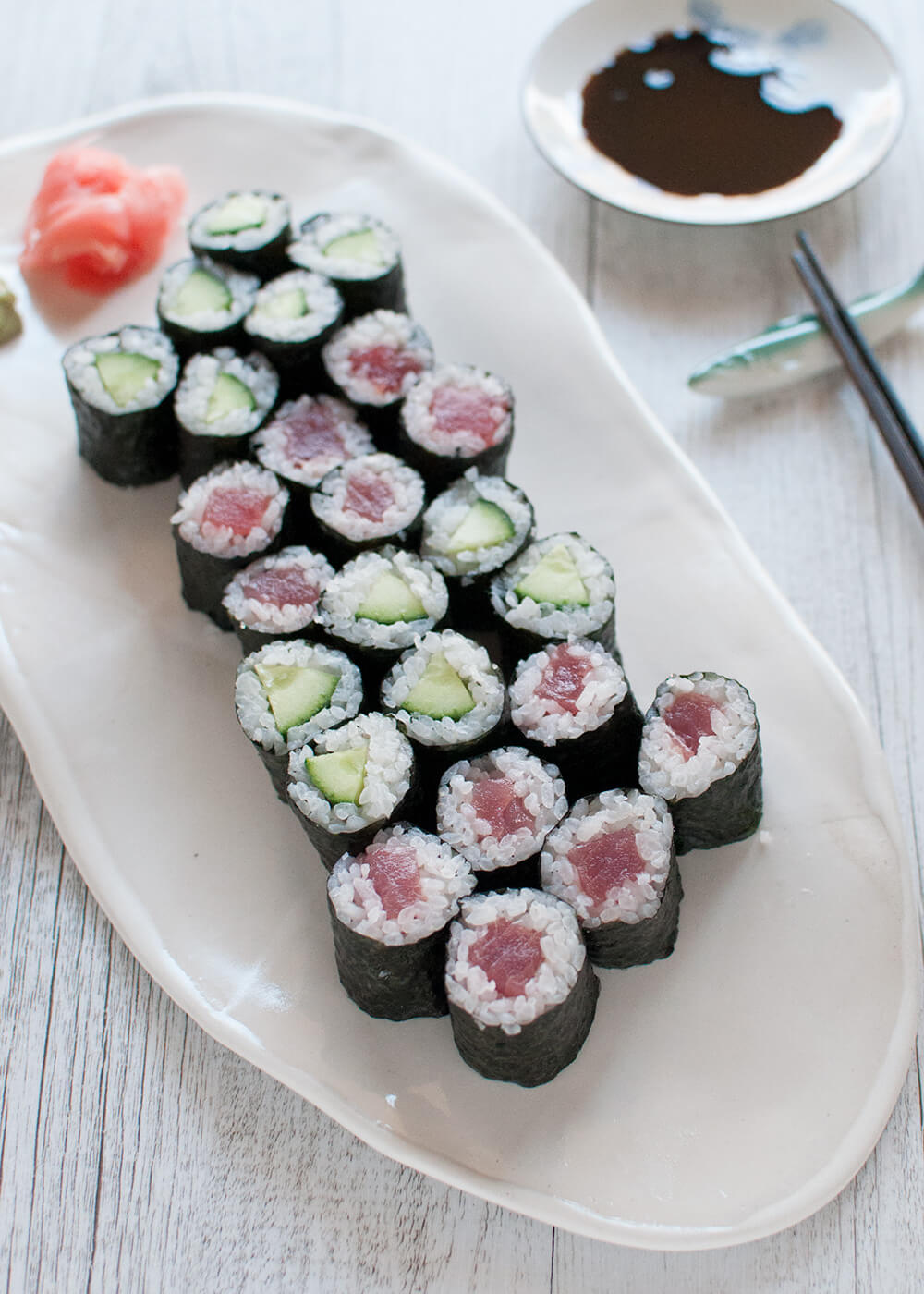 In the Western world, rolled sushi is generically called ‘sushi roll’. But in Japan, they have individual names depending on the types of sushi rolls. Firstly, there are different names based on the thickness of the roll.

If sushi rolls are wrapped with a roasted seaweed sheet, which is usually the case, it is called ‘norimaki’ (海苔巻き) as seaweed is ‘nori’ (海苔) in Japanese. But if the outside wrapping is a thin sheet of egg, then it is called ‘kogane maki’ (黄金巻き), meaning gold (黄金) rolls for its colour.

In the case of hosomaki, sushi rolls are named differently depending on the ingredient in the centre. To name a few: 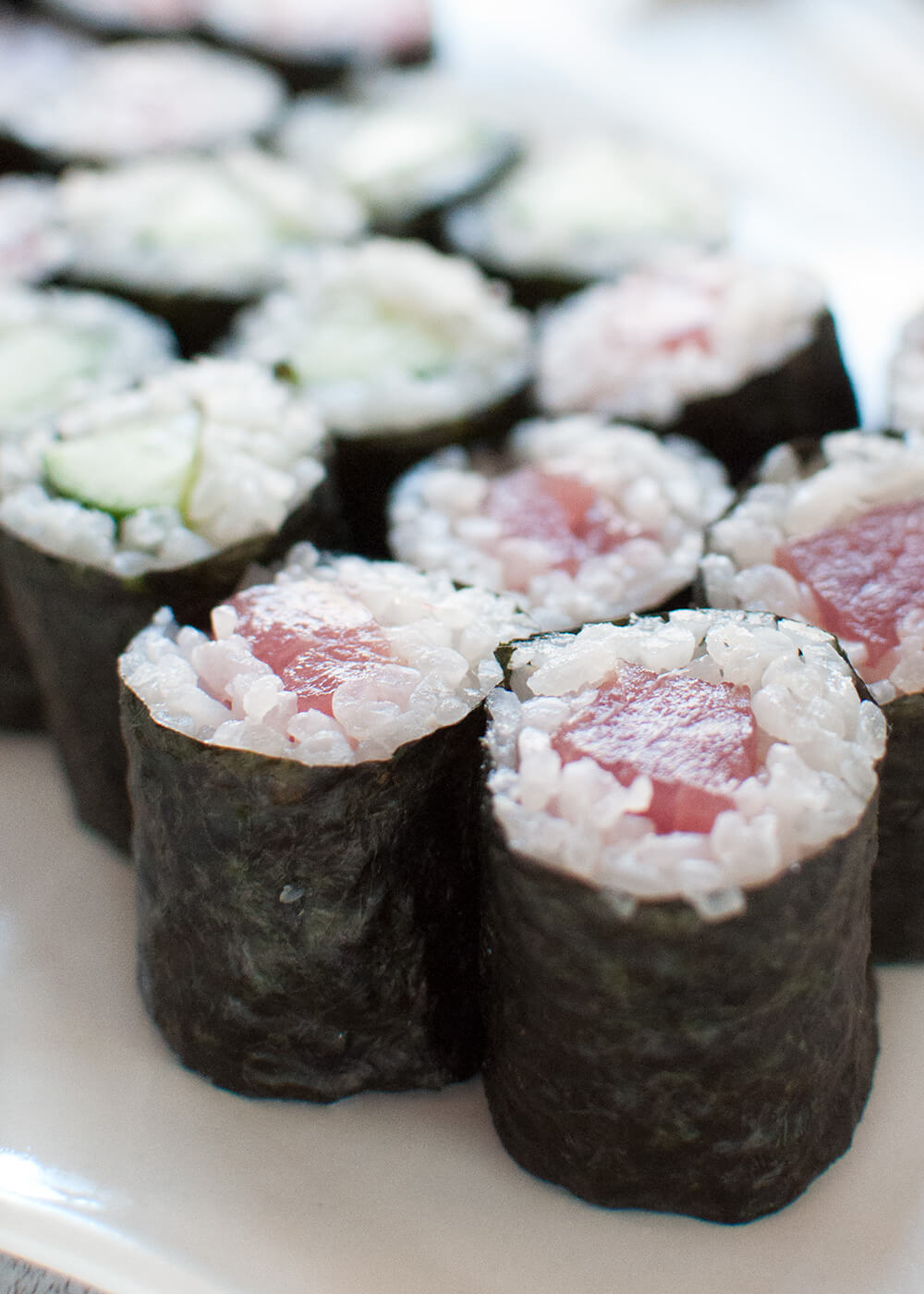 If you go to a sushi restaurant in Japan, even a sushi train restaurant, you will see the above names on the menu. You might wonder why I did not add salmon to the list. Salmon roll is quite popular among Aussies. But very traditional high-class sushi restaurants do not serve salmon as it was never served in the old days.

This is because salmon could only be caught in the far north and there were no means of transporting sashimi-quality salmon to Tokyo where sushi originated. Many of the sushi chefs respect the tradition.

In Sydney, futomaki usually comes with a single ingredient in the centre with a lot of rice around it, wrapped in roasted seaweed sheet. And they are sold as a long thick log. But you don’t see this type of sushi roll very much in Japan.

Futomaki are usually sold sliced about 2cm thick. You see, foods are mostly served bite-sized in Japan so that you can pick them up with chopsticks.

The ingredients in the centre of futomaki also differs between the Sydney version and the traditional Japanese version. Japanese futomaki contains many different ingredients placed in such way that it will look pretty when sliced. Some of them are so decorative that when sliced, they are like art. 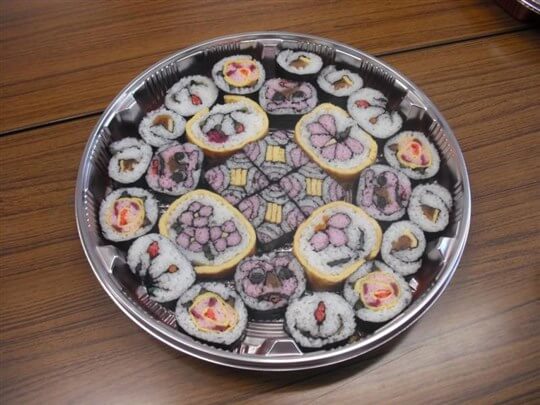 Decorative futomaki sushi roll is a local cuisine of Sanbu district in Chiba prefecture. These sushi rolls are served on the ceremonial occasions for celebration. Photo: supplied by Sanbu-shi (山武市) .

In my view, hosomaki is much easier to make than Japanese-style futomaki. Also, each hosomaki roll is so tiny that it does not fill you up even if you eat several of them. Perfect as a finger food. When you plate hosomaki with few different ingredients in the centre and line them up, they look so attractive.

You will need a bamboo rolling mat/bamboo sushi mat called ‘makisu’ (巻き簾) to make a sushi roll. It is about 40cm x 40cm (9.5” x 9.5”), woven from bamboo sticks and cotton strings. You can buy bamboo rolling mats at supermarkets as well as at Japanese/Asian grocery stores.

You might find different kinds of makisu– the type that has different texture on one side from the other (left and middle photo below) and the type which has the same texture on both sides of the mat (right photo below).

The first type is a more traditional makisu. It uses bamboo strips with the surface of the bamboo trunks intact so that one side of the mat is greenish and each bamboo strip is flatter. When rolling sushi using this type of mat, use the greenish side facing up, i.e. greenish side becomes the inside when rolling. If you use the wrong side of the mat, you may end up with sushi rolls with ridges around them.

If your rolling mat is the other type, you can use either side of the mat facing up. This type of rolling mat uses thinner bamboo sticks than the other type so unless you press too hard when rolling, you won’t make ridges around the roll.

How to Roll Sushi Rolls 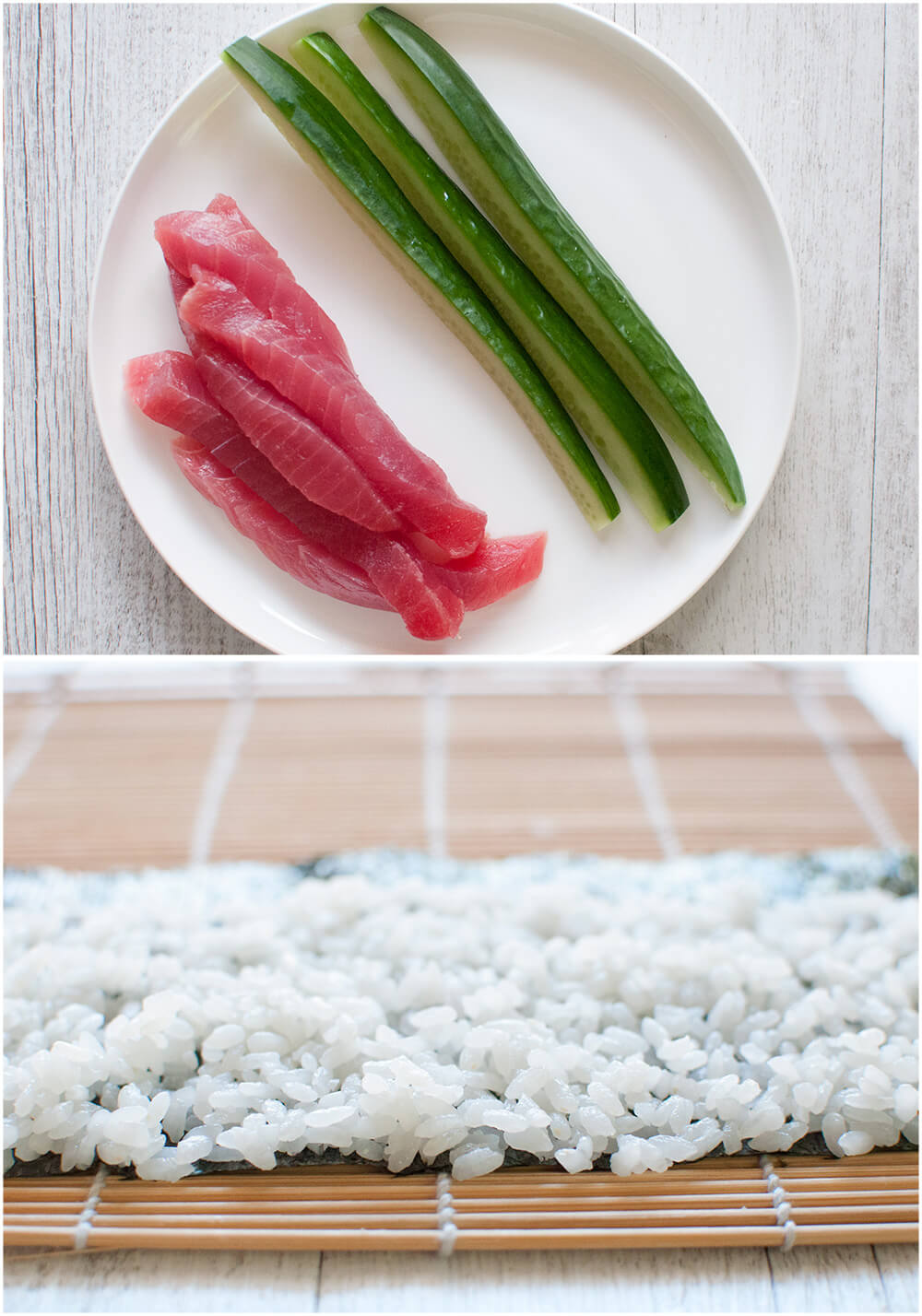 There are a few tips to successful sushi rolls, including:

I will not repeat the method of rolling sushi here as you will find a detailed explanation in the recipe but here is the step-by-step photos. 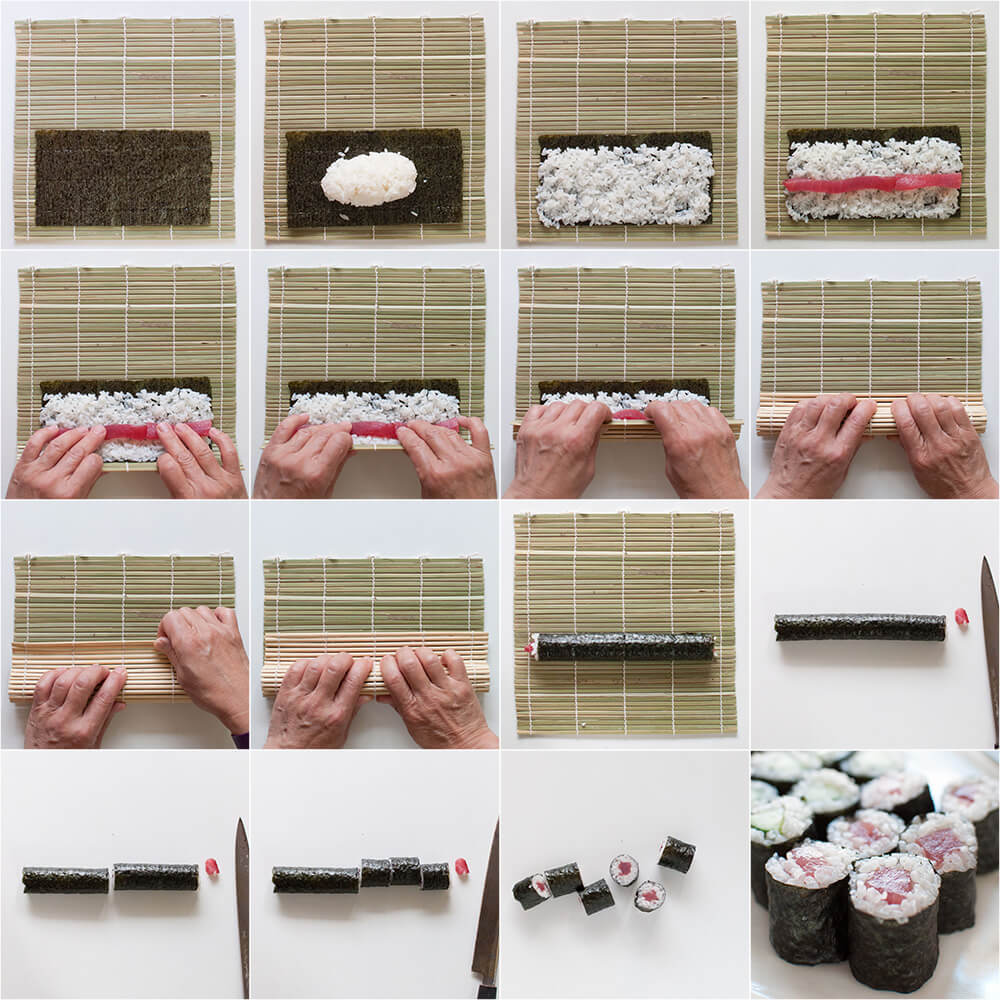 It is important to use the amount of rice specified in the recipe without varying much. If you increase the amount of rice too much, either the roasted seaweed sheet cannot wrap the entire rice or the sushi roll will explode after it’s rolled. If not enough rice is rolled, you will end up with either a loose roll or a very thin roll.

The same applies to the size of the ingredients to be placed in the centre of the rice. If too thick, the roll becomes too fat; if too thin, it does not look good when cut into small pieces.

In this recipe, I only made tekka maki (raw tuna roll) and kappa maki (cucumber roll). But if you use a couple more ingredients, you can make a very attractive and colourful plate of finger food like the photo below – in the centre of the rolls are raw tuna, cucumber, raw salmon (I am not a traditional sushi chef!) and blanched asparagus. 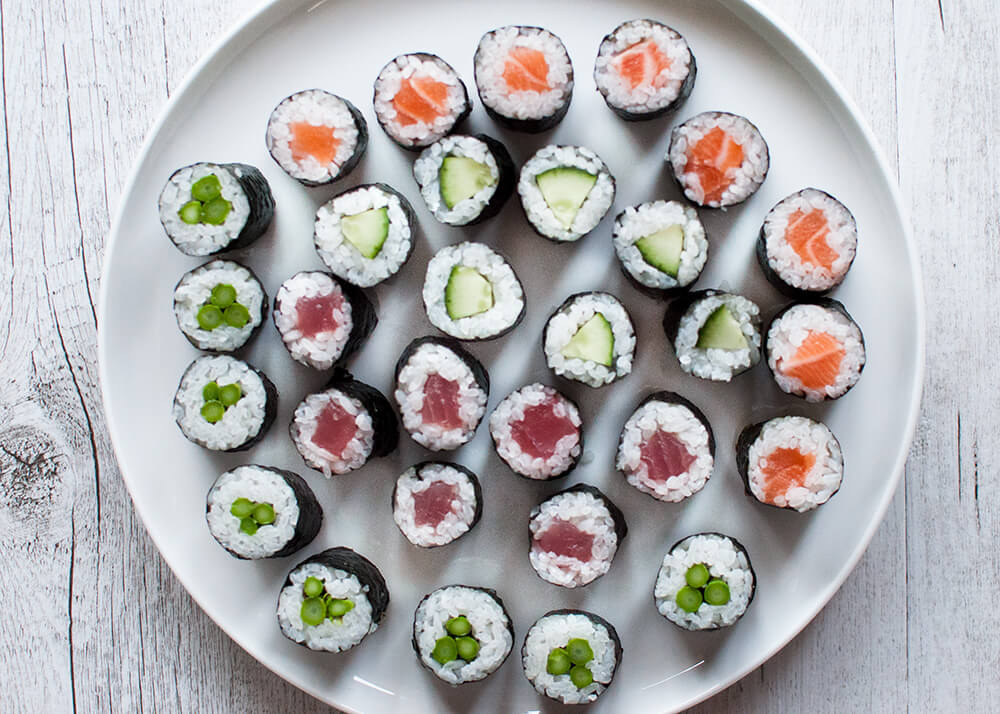 My sushi rolls are hosomaki (thin rolls) using a half-size sheet of roasted seaweed. But if you would like to make a thick sushi roll like those you buy at the take away shop, use a full-size seaweed sheet and double the amount of the rice.

It might look fiddly but once you get the hang of how to roll it, it is quite simple and quick to make. And, don’t forget that no cooking is required other than making rice! 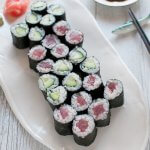 Sushi rolls are becoming a popular healthy take-away food in Australia. Most of them are made as large thick rolls but the sushi rolls made at traditional sushi restaurants are thin, tiny rolls, just perfect as a finger food.

1. You can buy sushi vinegar from the supermarket or Asian grocery store instead of making it from scratch. For the required quantity of store-bought sushi vinegar, refer to the instructions on the bottle.

2. You need to use sushi rice, short grain rice or medium grain rice (order of preference). Please refer to How to Cook Rice the Japanese Way but add 1 sheet of 10cm x 5cm konbu (kelp) when cooking the rice if you can. This will add umami to the rice.

3. My cucumber was called Lebanese cucumber which was 20cm long, 3cm thick and was just right for this. If your cucumber is short, make more strips and connect them when assembling the sushi roll.

4. You can buy a bamboo rolling mat/bamboo sushi mat at the super markets as well as at Japanese/Asian grocery stores. There are two types of mats (please refer to the photos in the post). You can use either type.

5. Some people may not like wasabi which has a kick of strong spiciness. So, I roll the sushi without wasabi inside. But, the traditional sushi roll has wasabi inside when the ingredients have no flavours added. Spread a small amount of wasabi along the cucumber/tuna before rolling if you would like wasabi inside the roll.

7. You can cut a roll into 4 pieces instead of 6 if you are eating the sushi rolls as part of your meal. If serving as a finger food, I think that 6 pieces per roll is better.