Coated in a flavoursome roasted white sesame sauce, today’s dish brings the best out of the burdock – it’s crunchy texture and unique taste. You can eat Pounded Burdock Root with Sesame Sauce just like snacks. 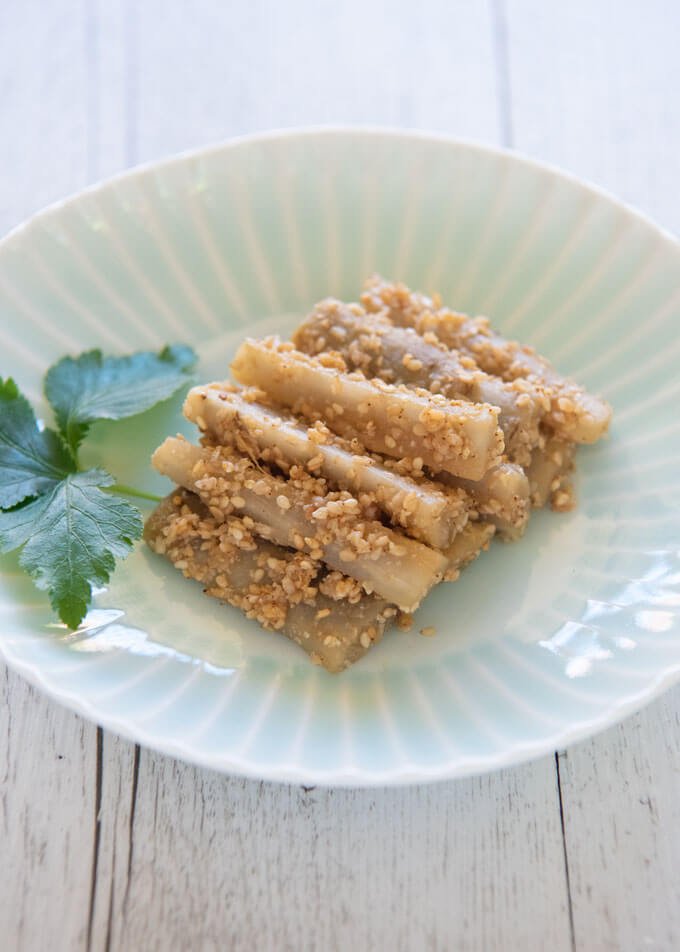 When I went to the Japanese grocery store and saw fresh burdock roots I had to buy them. Fresh burdock roots are so hard to find in Sydney that I usually have to use frozen sliced/julienned burdock for the burdock recipes.

You can imagine how excited I was when I saw the fresh roots!

Since I can rarely get a fresh burdock root, I pondered which burdock root recipe I should pick. Then, I decided to cook a dish that best brings out the flavour of burdock, such as Pounded Burdock Root with Sesame Sauce (Tataki Gobō).

Tataki Gobō (たたき牛蒡) actually means ‘pounded burdock’ in Japanese, but as a dish it is always dressed with flavoured white sesame sauce.

The cooking is quite simple. Boil the burdock pieces, pound them and dress in white sesame sauce. 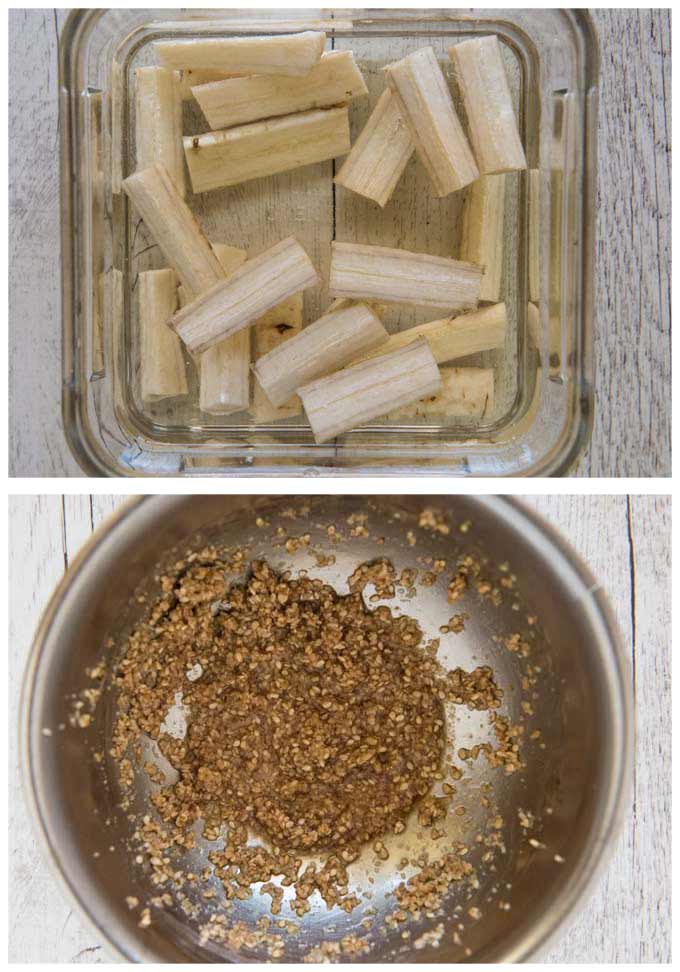 By pounding the root, the flavour of the sesame sauce is absorbed into the burdock pieces. It also tenderises the burdock.

Unlike my Tataki Kyuri (Smashed Cucumber Salad), you don’t smash the burdock pieces too much. Pound them just to bruise them and have a slight crack or two so that you can still retain the crunchiness of the burdock.

The Sesame Sauce for Pounded Burdock Root is always made with roasted white sesame seeds. I ground the seeds half way so that the sauce will have whole seeds, crushed seeds and powdery seeds. 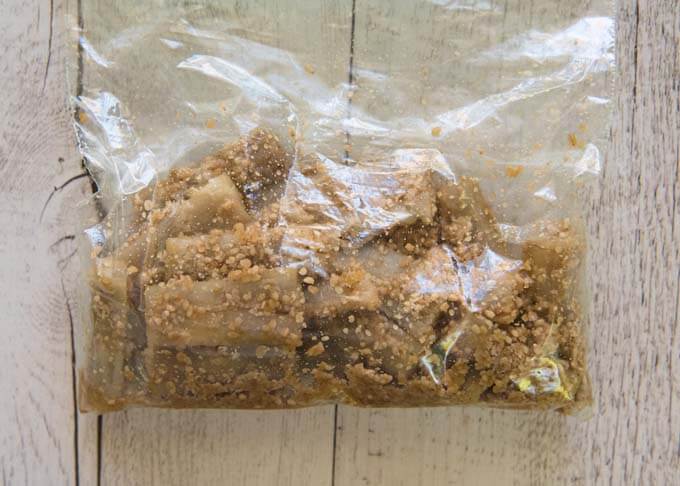 Some recipes use just grounded sesame, but I like the way whole seeds coat the burdock pieces. By partially grounding, you can extract a good flavour of roasted sesame while keeping the texture of the sesame seeds.

All you need to do is to add light soy sauce, vinegar and sugar to the semi-ground sesame seeds and mix well to make the sauce.

The proportion of these ingredients is 2 tbsp of roasted white sesame seeds (before ground) + 1 tbsp of light soy sauce + 2 tsp of sugar + 1 tsp of rice wine vinegar. If you don’t have light soy sauce, you can use normal soy sauce.

When I need to grind seeds finely, I use a mortar and pestle. But like today’s dish, if I only need to grind partially so that I can get a mix of seeds in different grinding level, I use a little kitchen tool specifically designed for grinding sesame seeds for Japanese cooking.

This tool is called ‘gomasuriki’ (胡麻すり器), meaning sesame grinding tool. This gmasuriki has been around for many years and I have been using it since I started cooking when I was in high school. 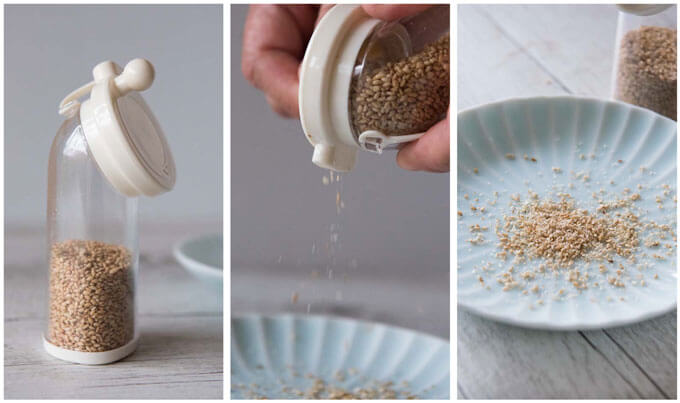 Its shape is a bid odd (see the left photo above), but it is ergonomic and well-designed. Hold the transparent plastic body with your left hand (for right handers), facing the handle downwards, then turn the coloured round plastic plate clockwise using the handle (see the middle photo above).

If you are only grating a couple of tablespoons of sesame seeds, this is easier and less washing (well, I hardly wash this tool).

I bought it at Daiso discount store, but you can find them on eBay and Amazon, etc. I just thought I should introduce you to a nifty little kitchen tool as I find it quite fun to turn the dial and see ground sesame seeds coming out.

Burdock is a Good Luck Food 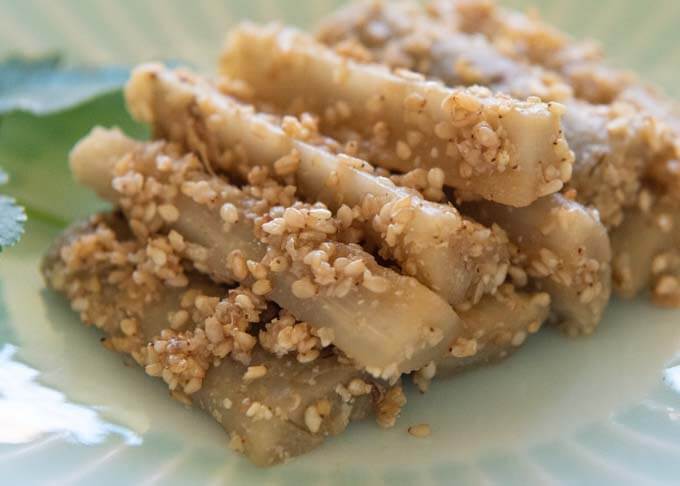 Tataki Gobō is often served in the New Year’s feast. This is because burdock roots grow straight into the soil deeply and for Japanese people this symbolises a stable foundation for the house, and good luck.

Tataki Gobō keeps about 5 days in the fridge. This is also the reason that Tataki Gobō is served as part of the set of dishes called ‘osechi’ (おせち). Osechi is a special feast for the New Year and is meant to be eaten for the first three days of January. 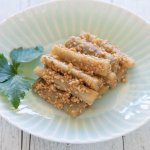 1. My burdock root was thin and long. It was about 50cm/1.6ft long which is too long to handle when scraping off the skin. That’s why I cut it to half. But if your burdock is fat and short, you don’t need to cut it.

2. I used light soy sauce to maintain the colour of the white sesame as much as possible. But you can use normal soy sauce instead.

3. The burdock pieces are small and hot but you need to pound them as fast as possible.

4. It is important to dress the burdock while hot so that the flavour of the Sesame Sauce is absorbed into the burdock effectively.

5. I put the dressed burdock pieces in a zip lock plastic bag and store them.

6. I used a Japanese sesame grinding tool that I bought at Daiso. It grinds the sesame to just the right degree for Tataki Gobō. Please see the photo in the post.

I included three side dishes today because there is an extra panel where I usually place a bowl of rice. When there are only four items on the dining table, I somewhat feel something is missing. Five items makes me feel like I’m splurging on meal. 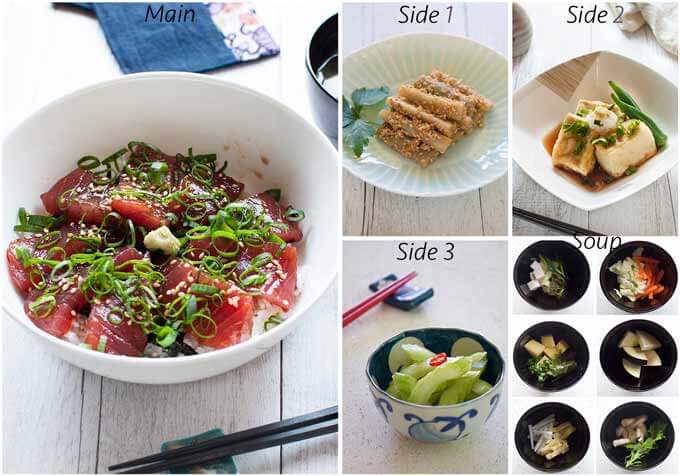