Grilled Snapper is often served on special occasions in Japan. Grilling is the simplest way of cooking a whole fish in Japanese cuisine. Sprinkle salt over the fish and grill the whole fish on the BBQ, grill pan or broiler.

You may not be accustomed to eating a grilled fish with bones and head intact but this is the best way to preserve the flavour and juiciness of the flesh. 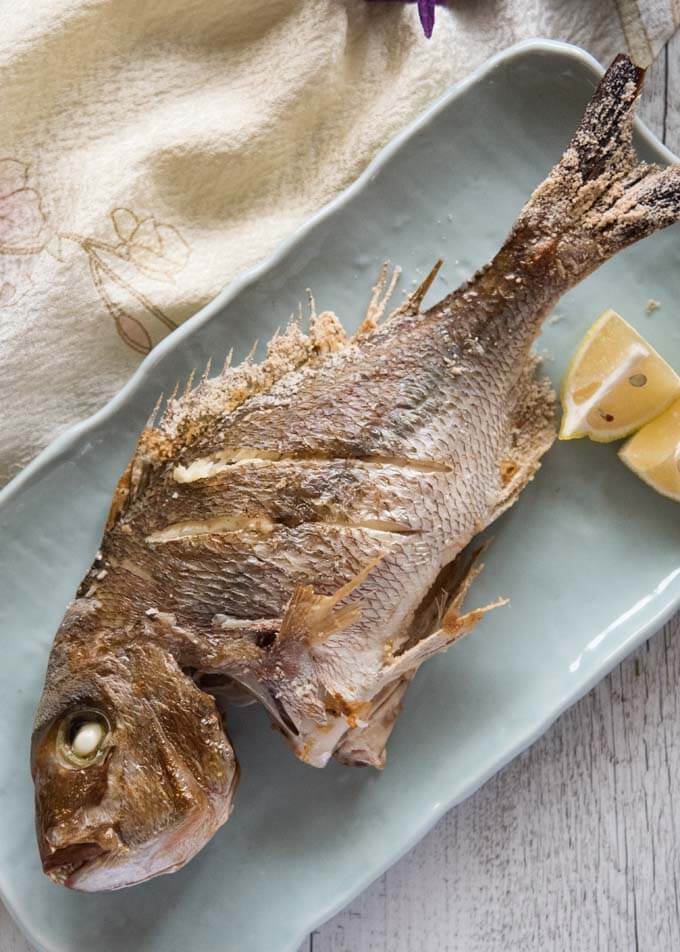 I cannot believe I have not posted grilled whole fish before now! Grilled fish is a signature dish of Japanese cuisine along with Sushi, Sashimi, Yakitori, and Miso Soup, etc.

I know that some readers might be put off by the eyes of the fish, and in other cuisines the eyes are often covered with a slice of lemon when a whole fish is served. But in Japan, the whole fish is considered to be an extravagant way of eating fish.

When a grilled whole fish is served, people say okashiratsuki (尾頭付き) meaning a fish with head and tail, implying ‘perfection’. And they feel like having a special treat, particularly when it is a white meat fish and a bit pricey fish like snapper.

This method of grilling is also called sugatayaki (姿焼き), which means grilling fish, squid or prawn retaining its original form.

You can grill other whole fish such as sea bass, bream, and yellowtail/horse mackerel. But in the case of a whole snapper, it is often served in celebrations including New Year’s Day. 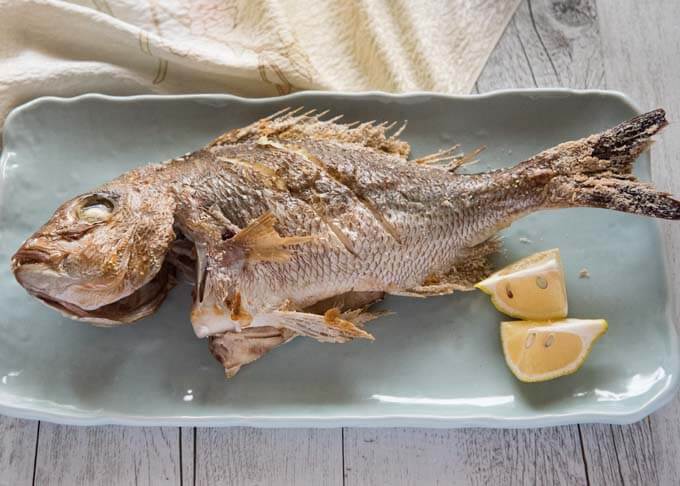 Why Snapper for Celebrations?

Snapper is called tai (鯛) in Japanese. On the other hand, people say medetai (めでたい) when a happy event takes place or calls for a celebration. And they linked the common sound ‘tai’ to associate snapper with celebrations.

This is yet again a play on words like the association between nandina (sacred bamboo) and Rice with Azuki Beans (Osekihan) that I noted in that post.

The colour of snapper is also a reason for using the fish for happy occasions. In Japanese culture, the colour red is considered to be a happy/festive colour. During the summer festivals, at Japanese-style wedding ceremonies, or even at school sports carnivals, they hang up a red & white striped curtain all around the walls. You can see the examples of red & white curtains here.

Snapper’s skin is pinkish and not exactly red, but they see it as red.

Techniques to make Grilled Snapper for a special occasion

Noting is wrong with just sprinkling some salt over the whole fish and grilling it on a BBQ or another grilling tool. But for a special occasion, there are a few techniques applied to the fish before grilling so that the grilled fish looks prettier.

When I grill a whole fish, I usually make a couple of diagonal incisions in the middle of the body where the meat is thickest (as you can see in the photos above). In Japan, a whole fish must be served with the head facing to the left. I do it only on the left side of the body so that the incision will be visible when served.

This incision technique is not supposed to be used when serving sugatayaki on special occasions because the grilled skin without being broken looks neater. But I like to do it to give an additional decoration when I serve a whole grilled snapper at home. If you make the incisions, then you don’t need to poke the skin.

Once you have performed the above preparations, you are now ready to grill.

To maintain the bent body shape and let the two incisions cook nicely, it is strongly recommended to cook the fish over the heat without touching the fish on the hot BBQ plate or grilling pan.

It is a fundamental Japanese cooking technique to grill fish with a strong heat but elevated away from it – about 10-15cm/4-6″apart. The thicker the fish is the farther away from the heat it should be. 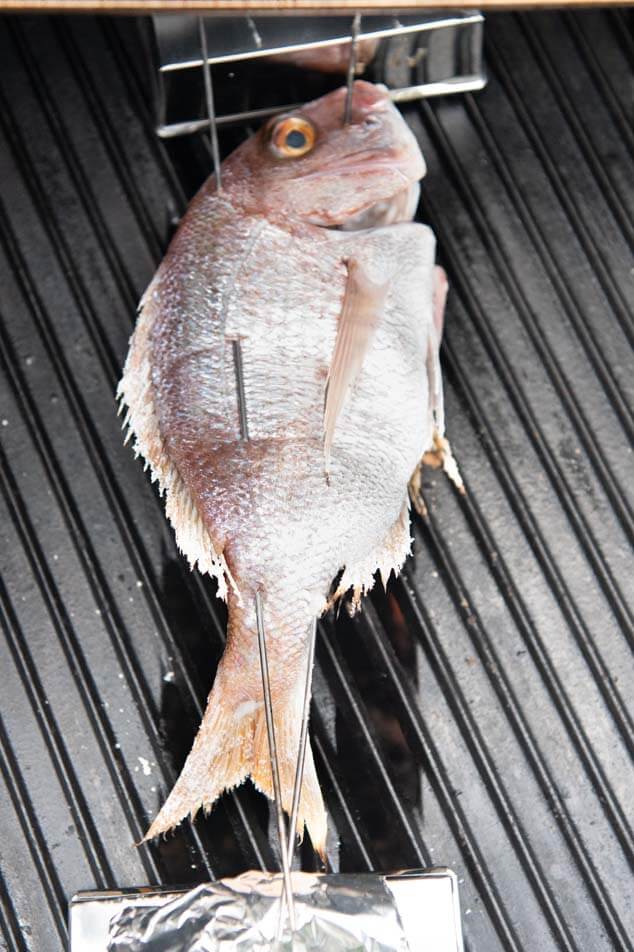 I often cook a fish on BBQ grill (not a flat hotplate) with two bricks or baking tins on each side of the grill. Since two skewers are put through the fish, I can place the end of skewers on the bricks to position the fish away from the heat and without touching the BBQ grill.

Firstly, cook the side that will be up when plated. In the case of the BBQ, this means that the side which shows the metal skewers on the body will be up to start with. After 5-6 minutes of cooking one side of the fish, turn the fish over and cook the other side for about 4 minutes.

The cooked snapper should have adequate salt flavour but if you like a strong saltiness, you may sprinkle a bit of salt or even pour some soy sauce over to eat it.

It’s a bit of extra work to make a whole fish look pretty but on special occasions or if you feel like showing off, you may want to try it. 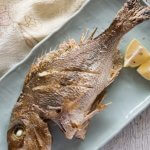 This recipe is quite long but it contains three different ways of grilling whole fish. Please also see the notes for omitting steps for day-to-day cooking.

1. My snapper was about 35cm long. You can grill a smaller or larger snapper. In the case of a larger snapper, you need to have very long skewers and a wide griller to be able to cook the whole fish at once.

2. I used stainless thin round skewers. They were 40cm long. They can be flat skewers as long as they are a very narrow width. If the skewers are very thick like those that you make koftas with, it might be a bit hard to put the skewers through the fish.

Bamboo skewers are not suitable as they will burn even if they are soaked in water before using them.

3. You can skip this step. The formal way of making grilled whole fish for special occasions is not to make incisions. But then you need to poke the surface of the both sides of fish randomly using the tip of a skewer. This prevents the skin from breaking when grilled.

4. If you are cooking a whole fish for dinner, you don't need to make the body of the fish too curved. You can simply put two skewers through on the right side of the body below and above the back bone.

5. If you are cooking a whole fish for dinner, you don't need decorate the fins. You can skip this section entirely.

6. Depending on the size of the fish the cooking time varies.

7. The combination of my oven shelves and the height of the baking tray was not a distance of 10cm (it was 15cm actually) from the heat. So, I placed a thin tray upside down between the shelf and the baking tray to lift the fish up.

8. Since the right side of the fish is attached to the bottom of the tray, you may omit applying salt decoration to the pectoral fin on this side.

Because of the rice cake in the soup, there is no need to serve a bowl of rice in this menu. So, I added an extra side dish. 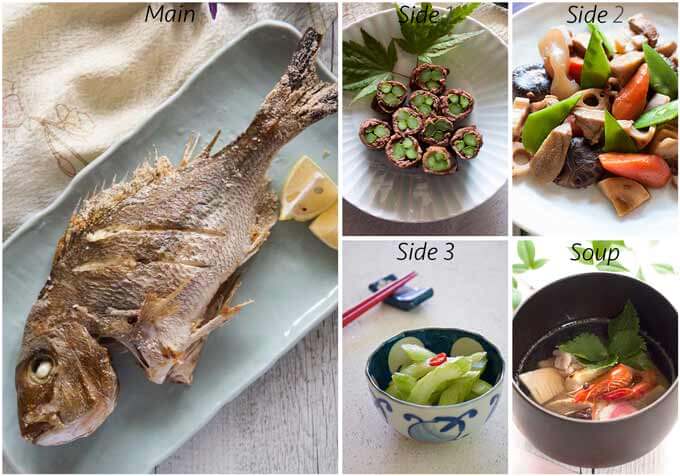