With gravy mince poured over the steamed pumpkin, Steamed Pumpkin with Beef Mince Sauce is so filling that you could make it a main dish. Simmered Pumpkin is a popular Japanese side dish among the pumpkin recipes, but today’s dish is also popular. 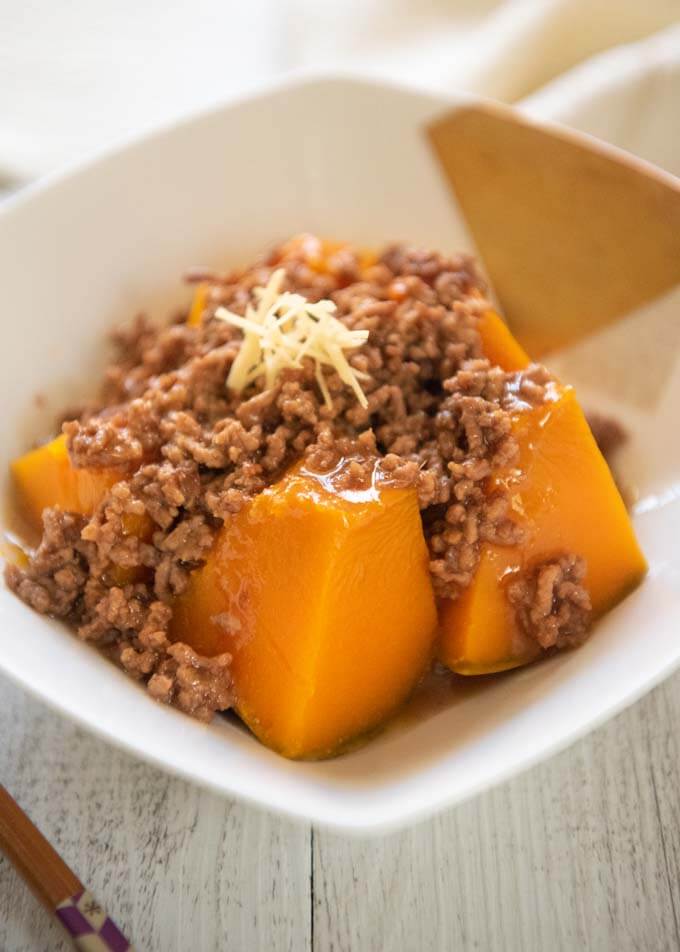 Instead of boiling the pumpkin, steam it so that the flavours are retained inside of the flesh. A flavoursome dashi-based gravy sauce made with beef mince/ground beef makes this dish a real comfort food.

Steaming is the best for Pumpkin with Beef Mince

Compared to boiling or stir-frying, steaming is considered to be a healthier way to cook food.

And of course unlike stir-frying no oil is required to cook.

There are many ways to steam pumpkin: 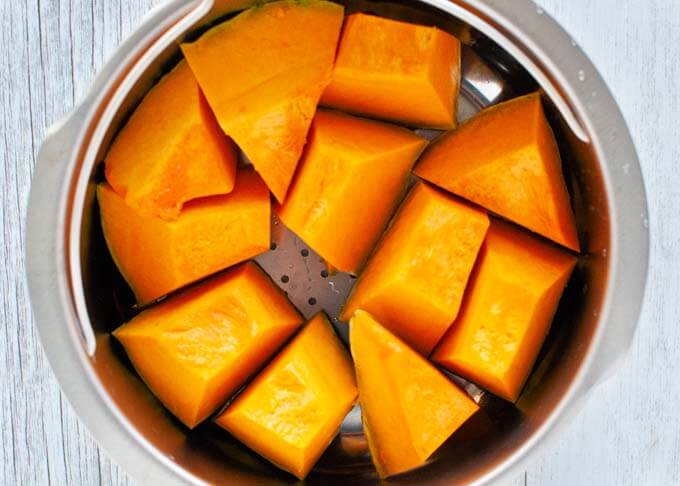 For today’s dish I tried two cooking methods – using a pot and using a microwave. The recipe instructions use a pot to steam the pumpkin but I added a note about how to cook it in a microwave.

Microwaving is actually faster, but there could be inconsistencies in how well the flesh inside is cooked. To overcome this problem, you either have to turn the pumpkin pieces over or not turn and accept the fact that part of the pumpkin might be a bit too soft.

I touched on soboro-an in my post, Braise White Radish with Pork Mince and I am repeating it here. When mince is cooked and flavour is added, it becomes ‘soboro’ (そぼろ). When soboro is cooked in a thick sauce, it becomes soboro-an. 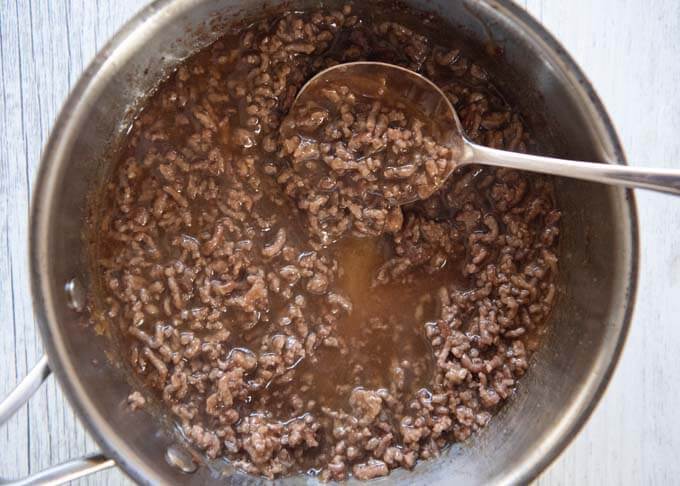 Soboro can be made with eggs as well instead of minced meat. When beaten eggs are cooked in a frying pan and stirred vigorously until they become small pieces it’s called egg soboro. See my Sanshoku Bento (tri-coloured Rice Bowl), which includes two kinds of soboro – egg and meat.

The word ‘an’ (あんor 餡) means three things one of which is thick sauce. The other meanings are (1) sweet bean paste and (2) fillings for dishes such as Gyoza, Shumai, and Japanese sweets, etc.

Cut the pumpkin into cubes and steam them. Cook the beef mince with ½ tablespoon of oil, then add dashi stock, soy sauce, mirin, sake, sugar and grated ginger. Cook and reduce the sauce a little bit.

Add a small amount of cornflour/corn starch to thicken the sauce. Pour the mince sauce over the steamed pumpkin and it’s done! 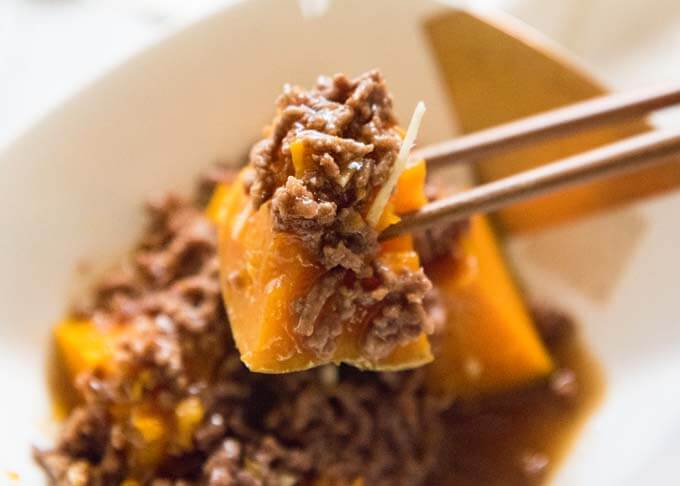 When I cook a dish using beef mince/ground beef, I often end up with a small amount of left-over mince which is not enough for a main dish. Today’s dish is a perfect ground beef recipe to consume such left-over mince. Instead of beef, you can use pork mince or chicken mice too.

Steamed Pumpkin with Beef Mince Sauce is quite filling for a side dish. You could even increase the quantity and make it a main dish too.

Today’s dish is cooked in the time it takes to steam the pumpkin pieces . You can keep it in the fridge for 2-3 days. You can also freeze it for a few weeks but when re-heated, the pumpkin tends to become mushier. 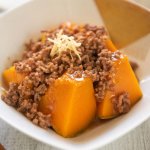 With gravy mince poured over the steamed pumpkin, Steamed Pumpkin with Beef Mince Sauce is so filling that you could make it a main dish. Simmered Pumpkin is a popular Japanese side dish, and today's dish is also popular.

1. There are different varieties of Japanese pumpkins. In Australia, Kent pumpkin is often labelled as Japanese Pumpkin and that is what I used today. It is larger in size than the Japanese version and the skin colour is different, but it works well with this recipe. If you can find the Japanese version of Kabocha, it’s even better.

2. It is totally alright to use pork or chicken mince as a substitute for beef mince. You will get quite a different flavour of the sauce. You may also reduce the amount of ginger if not using beef mince.

3. Japanese citrus, yuzu, is often used as a garnish on top of the Soboro-an. But I cannot get fresh yuzu in Sydney so I substituted it with ginger since ginger flavour is added to the sauce. You could also use finely julienned lemon rind as an alternative.

4. See my post, Simmered Pumpkin (Kabocha No Nimono) to see how I cut the pumpkin.

5. The duration of steaming varies depending on the size of the pumpkin, variety of pumpkin and the strength of the heat. If a thin bamboo stick or a fork can get through the pumpkin easily, it is OK.

I matched today’s side dish with Sakamushi Fish as it also requires a steamer to cook. While using a steamer for the pumpkin, I thought I could make use of it for the main dish too. Although Sakamushi Fish takes a while to prepare, steaming takes only 5 minutes.

You can have another kind of fish dish if you are in a hurry such as grilled fish. A chicken dish can go well too. 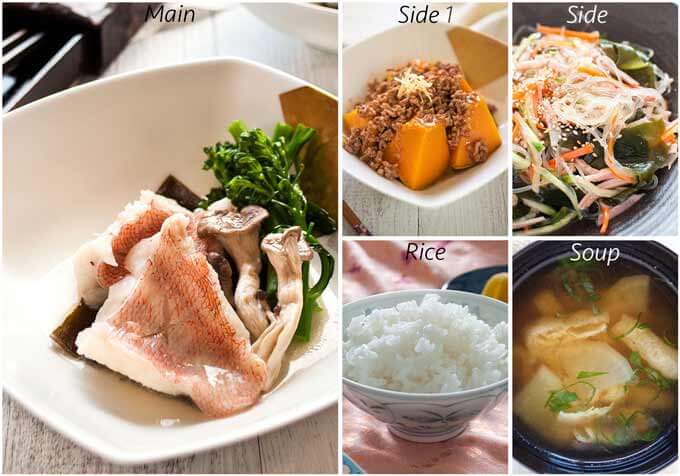