Sakamushi (酒蒸し, steamed in sake) Fish is a very authentic Japanese dish and sometimes served in kaiseki-ryori (multi-course haute cuisine). In a nutshell: White-fleshed fish is steamed with plenty of sake (酒, Japanese rice wine). This is a very simple method of cooking fish but the flavour of fish is amazing. It will make you feel like you are having a dish at a high-class restaurant! 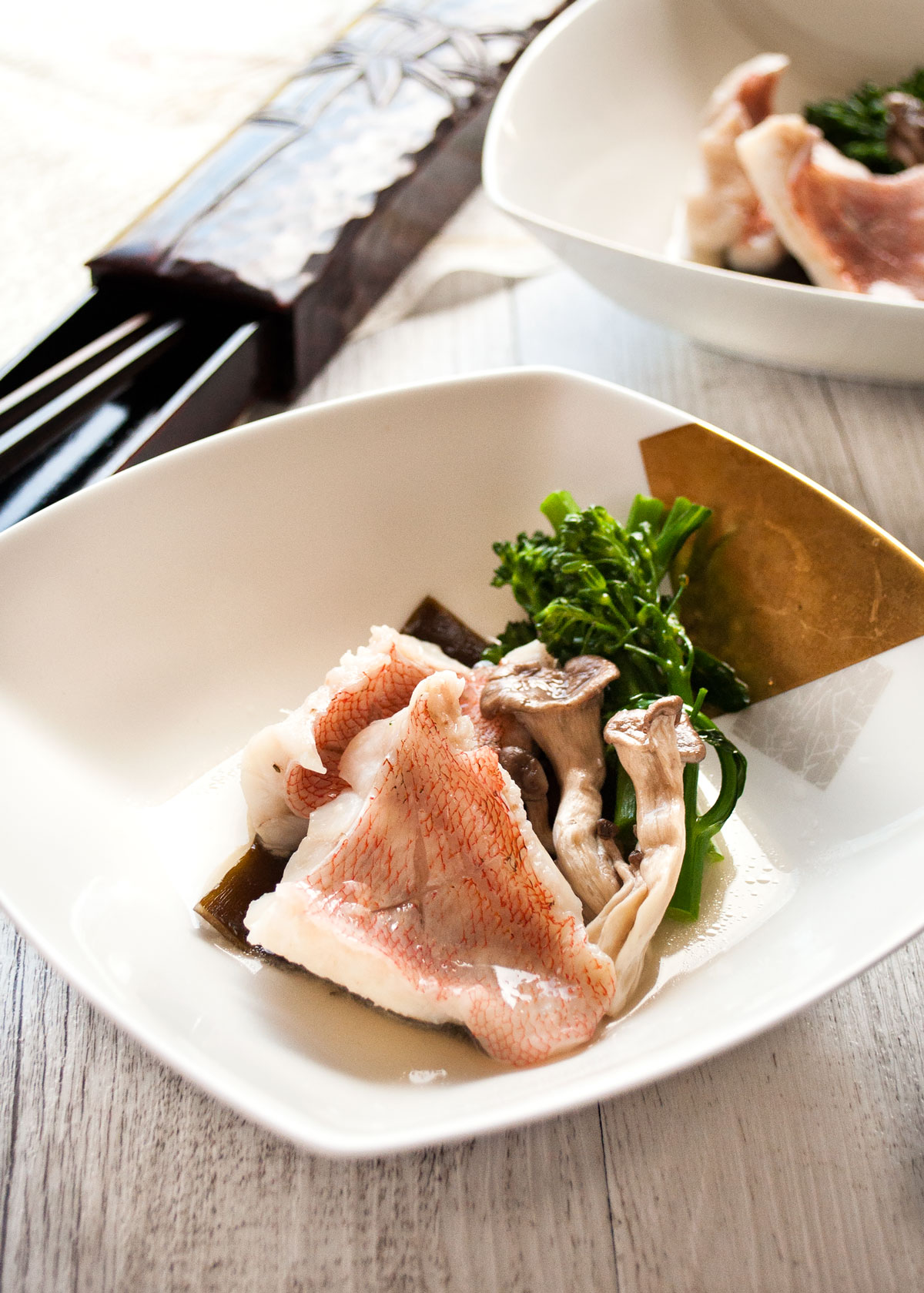 When fish or meat is steamed with sake (酒, Japanese rice wine), it is called sakamushi (酒蒸し). The first kanji character reads “sake” but when followed by another word, in this case “mushi” (蒸し), the sound sometimes changes to “saka”. The word “mushi” (蒸し) is the noun form of “musu” (蒸す) which means steam.

The most popular sakamushi is “asari no sakamushi“ （アサリの酒蒸し) meaning sakamushi of asari (アサリ). Asari are Japanese clams or Japanese cockles. The letter “の” is equivalent to “of” in this context. If you Google the word “sakamushi” or “酒蒸し” , all sorts of  asari no sakamushi  recipes come up. Perhaps because it is the easiest to make and consumed in a rather casual manner, asari might be the most popular sakamushi made in Japanese households. It is also a popular menu item at izakaya (居酒屋, Japanese style tavern).

You could also cook other shellfish in the same way such as abalone, mussels, oysters and so on. In the case of sakamushi fish, you typically use non-oily white meat fish such as ocean perch/rockfish, snapper, cod, jewfish. Usually, fish fillets are used so that it is easier to eat but sometimes a whole fish or even a fish head is steamed in sake.

I used ocean perch/rockfish fillets today. It was quite small as each fillet weighed only 90g/3.2oz and I bought two fillets for 2 servings. It could be a main dish if you are serving in Japan as they tend to eat smaller amount of protein. But in the Western world, this would just be a starter, maybe. In the case of kaiseki-ryori (multi-course haute cuisine), the serving size will be even smaller as kaiseki-ryori course is made up of so many different dishes in small portions. When I accumulate enough recipes in this blog, I am hoping that I will be able to talk more about kaiseki-ryori with a course menu. 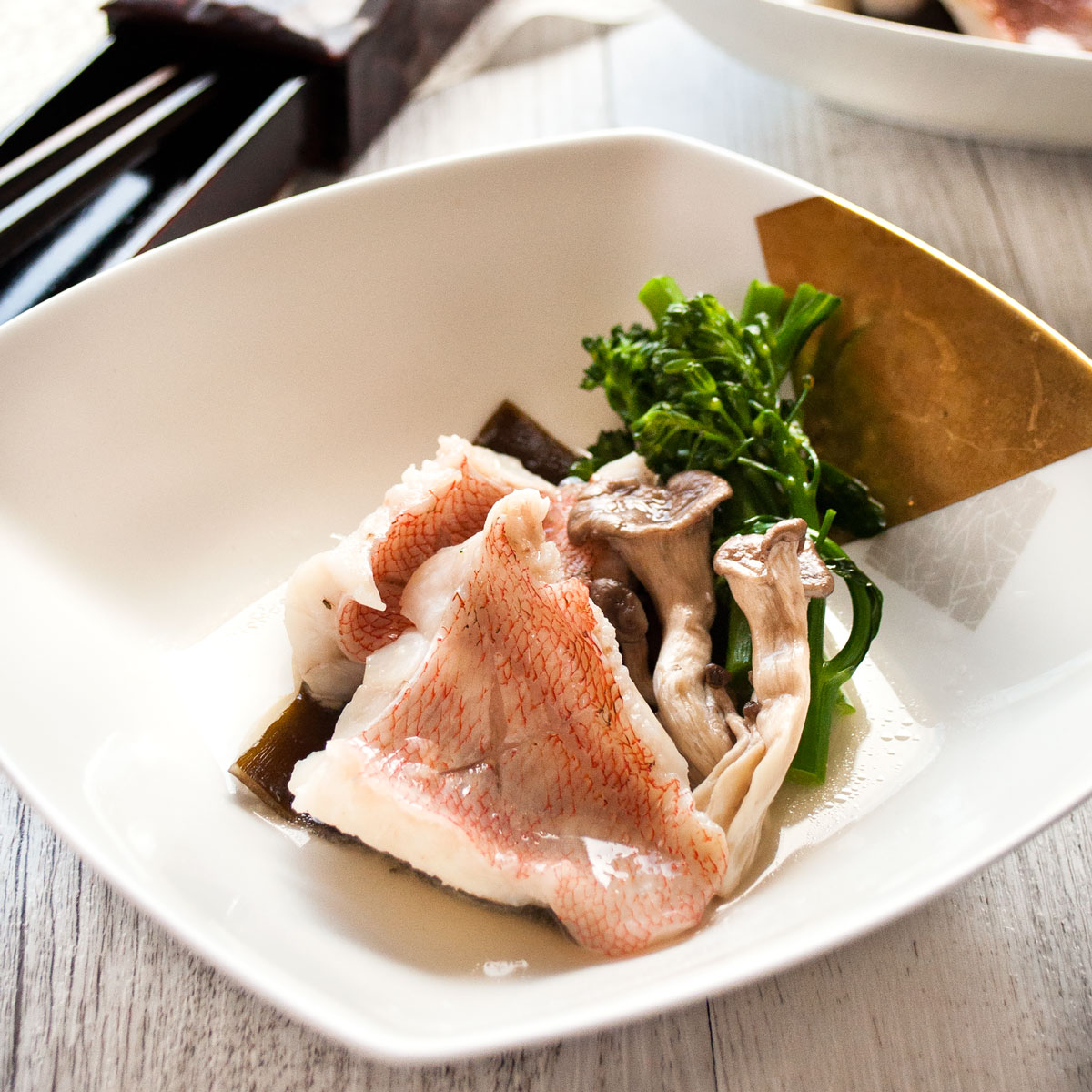 Sakamushi is so simple that there aren’t many variations to it in terms of seasonings. In the case of fish sakamushi, all you need is fish (either fillets or whole), salt, sake and konbu (昆布, kelp). All you do is place konbu and fish on a plate, pour sake over it and steam it. Simple as that!  But in my recipe, I have extra steps to give a little bit of professional touch.

None of the above steps are mandatory but if you have time, I recommend that you do. You can see the steps I went through to make this dish in the photos below.

In Japan steaming is always done on the cooktop using a large, deep steamer pot which is similar to Western style steamer pots. It consists of a couple of steaming compartments stacked on top of the pot which is filled with water.

I used to have a Japanese style steamer back in Japan but I did not bring it with me as I had to minimise the pots and pans to only those immediately required! Traditional Japanese steamer pots are brass colour and it is squarish with round corners, not round like the Western style steamer pots. But these days, the round style pots seem more readily available.

As I don’t have a steamer pot, I use a Chinese bamboo steamer whenever I need to steam food. I initially bought a couple of mid-size bamboo steamers to steam dumplings but then I realised that I needed a large steamer to steam a whole fish. So I bought two 30cm/11¾” bamboo steamers which were the largest I could get.

Then I got into trouble. I did not have a pot on which the 30cm/11¾” bamboo steamer could be placed to boil water. I had a large wok but it was 2-3 cm/1″ too small in diameter. Oops! So I had to buy a huge wok which can comfortably hold this large bamboo steamer. The diameter of the big wok is 35.5cm/14″! See the photo of the large wok in the photo above. On the day I bought this large work and brought it back home, my son looked at it, listened to why I bought it and shook his head with disbelief.

But I never regretted it. I can use this to deep fry a large quantity of food, I can make a large amount of fried rice, as well as of course steam a large amount of food. If you stack two bamboo steamers on top of one another, you can easily steam a family main meals at once. The bottom of this wok is also flat unlike the smaller one I have so it sits on the stove steadily without a wok stand, which is a bonus. 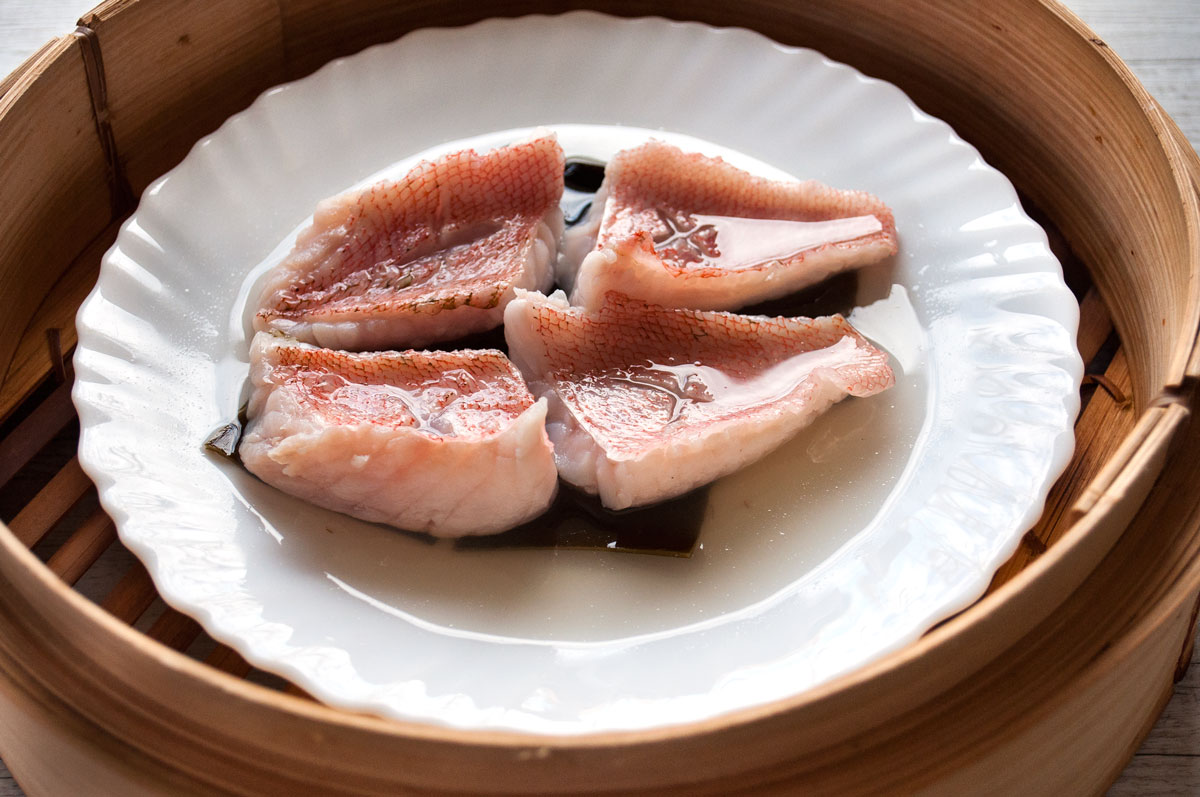 Steaming without a Steamer

If you don’t have a steamer, don’t worry. You can use a large pot with sufficient depth so that you have enough room to put water in and place a plate which is elevated to above the water level.  There are a few methods of setting up a steamer using a normal pot:

With all these methods above, you need a bit of room between the side of the pot and the edge of the plate. Otherwise it is pretty hard to take the plate out when the steaming is finished. If you really can’t afford to have sufficient room around the plate, I would suggest that you use two cotton strings/twines and use them to lift the plate like this:

The fish has a light salt flavour to it so if you prefer a lightly flavoured meal, you can eat it with no additional sauce at all. You can still taste the fish with sake and konbu. However, most people will find that the flavour of this fish is a bit too delicate/light so I would suggest that you eat it with a small amount of ponzu. Please refer to the recipe to make ponzu in Japanese Dressings.

You can buy ponzu from Japanese/Asian grocery stores but I would strongly recommend that you make it at home. Ponzu can keep for a long time in the fridge. The longer you keep it the better the flavour gets. I recently used my home made ponzu which was sitting in the fridge for a few months. Then I  used the newly made ponzu few days later as I ran out of the old one. The difference in flavour was pronounced and I was quite surprised. You see, ponzu grows mellow with age just like some people! 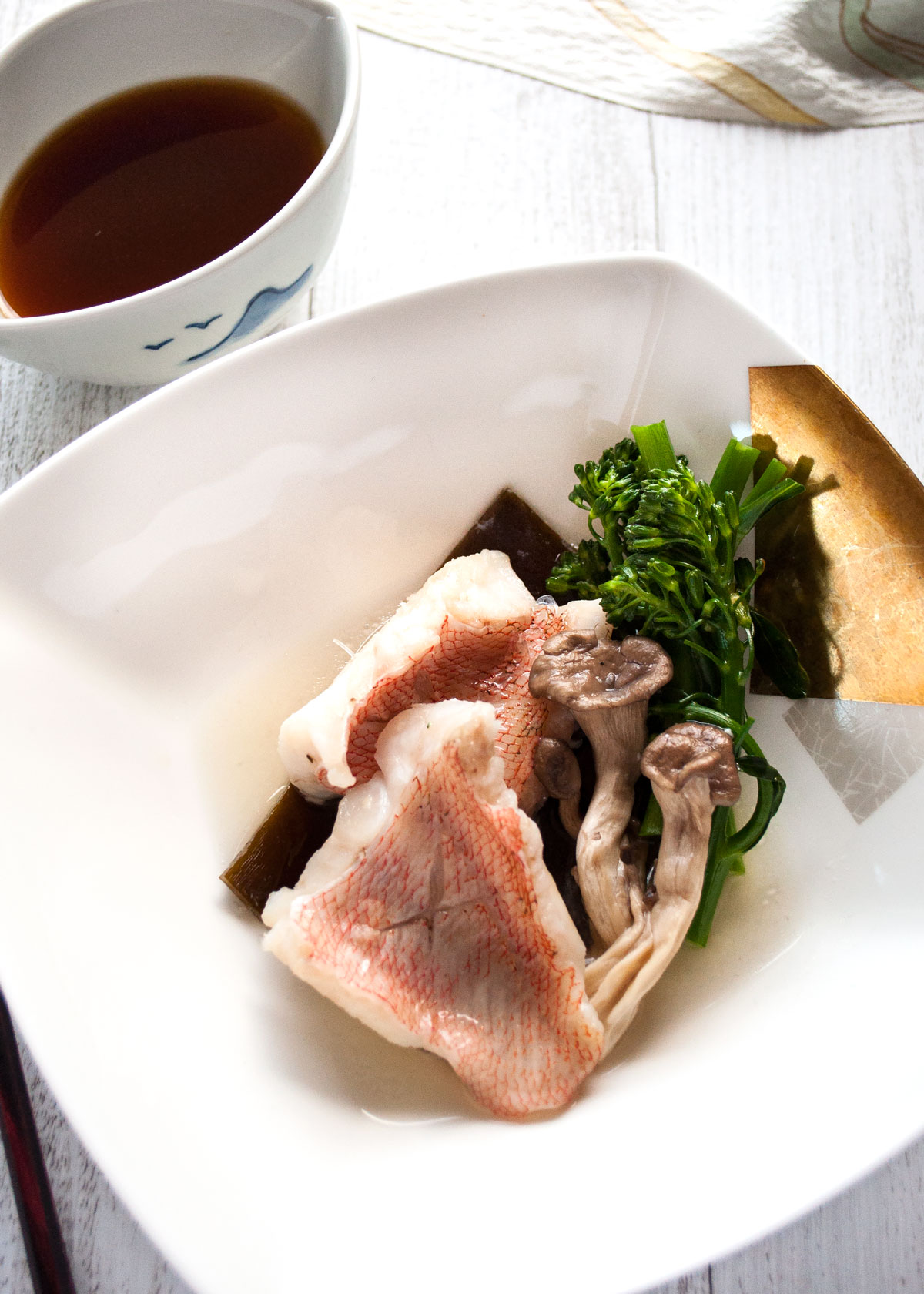 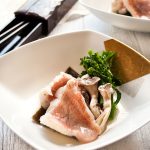 1. You can use other white meat fish fillets such as snapper, cod, jewfish, bream. The fillets should have skin on, so that it adds to the colour to the dish.

You could serve a larger portion of fish if you like.Just increase the amount of konbu and sake accordingly.

2. You could use other vegetables suitable for steaming. Beans, snow peas, shiitake mushrooms, asparagus might be good. The amount of vegetables can also vary but you need to think about the balance against the size of the fish fillet.

In my view, mushy vegetables such as potatoes, pumpkins are not best suited for this dish, nor vegetables with strong flavours such as capsicum.

Depending on the colour of the fish, you may want to change the choice of vegetables. For example, if you are steaming cod, you may add sliced carrots to add a bright colour to the dish. If you cut the carrots into flower shapes as explained in my post, Sanshoku Bento, it would look pretty.

3. If each stem is small, you may take a couple of stems together as one.

4. Please refer to the recipe to make ponzu in Japanese Dressings. I would strongly recommend that you make it at home. Ponzu can keep a long time in the fridge. The longer you keep it the better the flavour gets.

But if you wish, you can buy a bottle of ponzu from Japanese/Asian grocery stores.

5. The time taken to cook the fish fillets will depend on the strength of the steaming as well as the thickness of the fillet. My fish was about 1.5-2cm (5/8-3/4”) thick and steam was on high.

6. The sake liquid from cooking contains tons of flavour with the konbu and fish so don’t discard. But you might find that you would only need half of what’s left on the steaming plate.