Japanese Vermicelli Salad (Harusame Salad) is a refreshing summery salad with julienned ham, cucumber, carrot and wakame seaweed. It is simple and fast to make. It can also be a main dish just like noodle dishes! 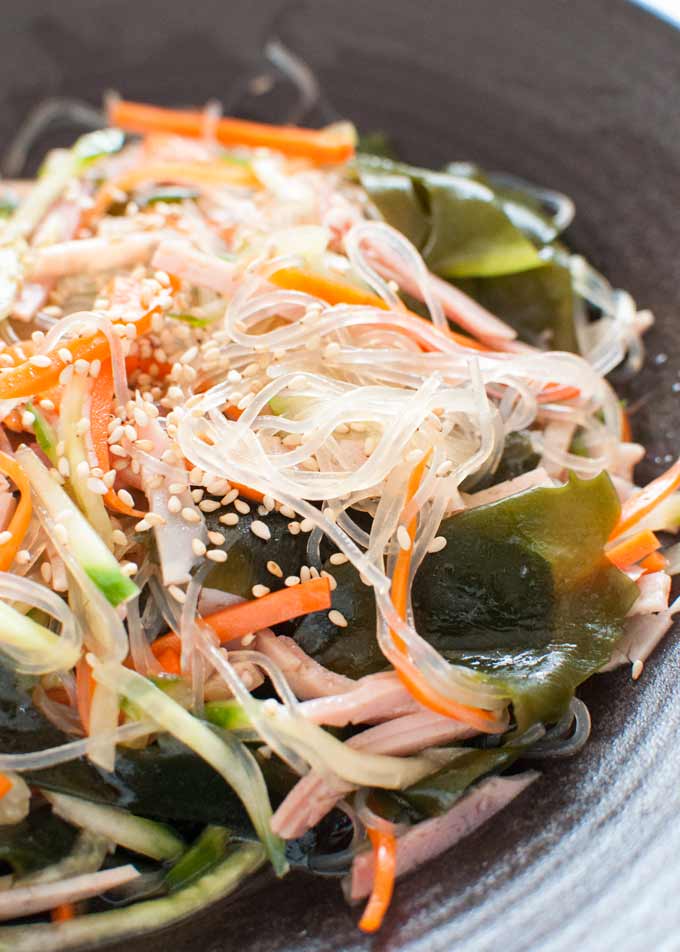 Vermicelli Salad is one of the salads that are always sold at ‘depachika’ (デパ地下) – the food markets on the underground level of Japanese department stores. ‘Depa’ (デパ) came from ‘department store’ and ‘chika’ (地下) means underground.

Vermicelli Salad is particularly popular in hot summer, perhaps because the translucent noodles bring coolness and a refreshing feeling to diners.

Vermicelli can be many different things depending on cuisines. For Italians, vermicelli is a very thin pasta. In Asia, thin rice noodles are called rice vermicelli. Dried thin noodles made from either mung bean or potato starch are also called vermicelli (or vermicelli noodles) and this is what I am talking about today.

In Japan, dried vermicelli is called ‘harusame’ (春雨), which literally means spring rain. The name came from the appearance of very thin dried vermicelli noodles as they look like gentle rain in spring. It’s so poetic, isn’t it? 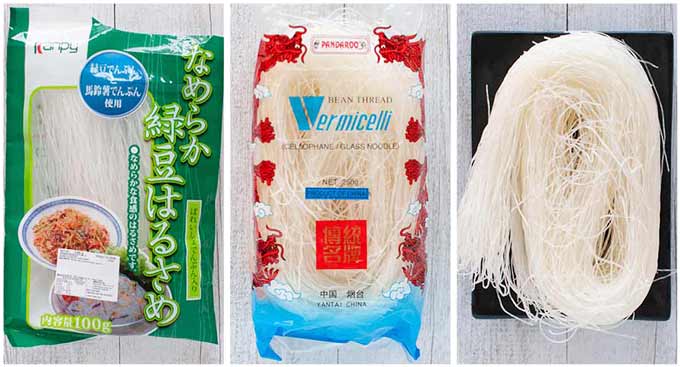 Harusame is made from either mung bean starch, potato starch or combination of those starches. The harusame that I used in today’s recipe contained a mixture of mung bean and potato starches.

I bought a pack of harusame from the Japanese grocery store (see the left photo above) but instead of harusame, you can use mung bean vermicelli (also called bean thread), which is a product of China and available at Asian grocery stores and supermarkets (see the middle and the right photos above).

The major difference is that harusame is neatly cut to about 20cm/8″ long while Chinese vermicelli is very long and folded a few times to make a big bunch. It could be a challenge and a bit messy to take only a small amount of vermicelli from the folded bunch. The colour of the noodles is also a tiny bit different.

Do not get confused with rice vermicelli, which looks just like mung bean vermicelli. The rice vermicelli does not stay transparent when rehydrated and the texture is quite different.

I made a typical Harusame Salad with minimal ingredients today – vermicelli, carrot, cucumber, ham and rehydrated chopped wakame seaweed. The vegetables and ham are all julienned. If your wakame seaweed comes in a long strand, cut it into small pieces. 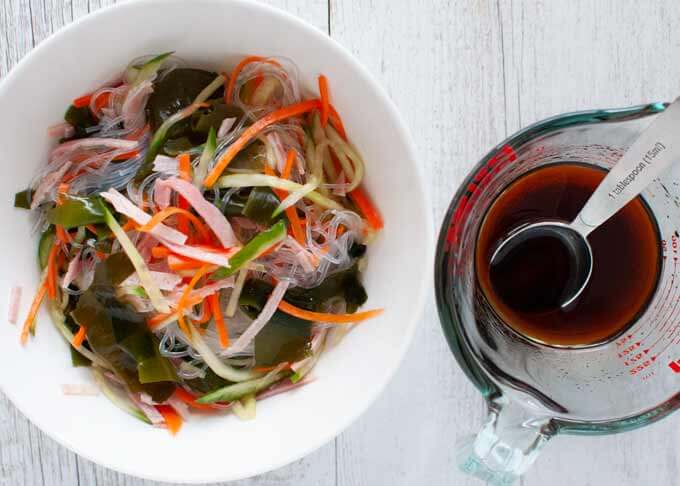 Other than these, I sometimes add bean sprouts and/or kinshi tamago (julienned egg crepes). See my post Hiyashi Chūka (Cold Ramen) for details about kinshi tamago.

Instead of ham, I might use shredded cooked chicken (poached or steamed). Instead of wakame seaweed, I might use black fungus (also called wood ear fungus/mushroom).

I sometimes replace ham with other vegetables and make it vegetarian.

You have probably seen many salads using vermicelli noodles on the internet. They are mostly Vietnamese, Thai and other Asian style salads. By no exception, the dressings for these vermicelli salads are either spicy with chili or flavoured with fish sauce and garlic.

The dressing for Japanese Vermicelli Salad does not use any of these ingredients and the flavour is rather mild. It is a simple dressing made by mixing vinegar, soy sauce, sugar and sesame oil. 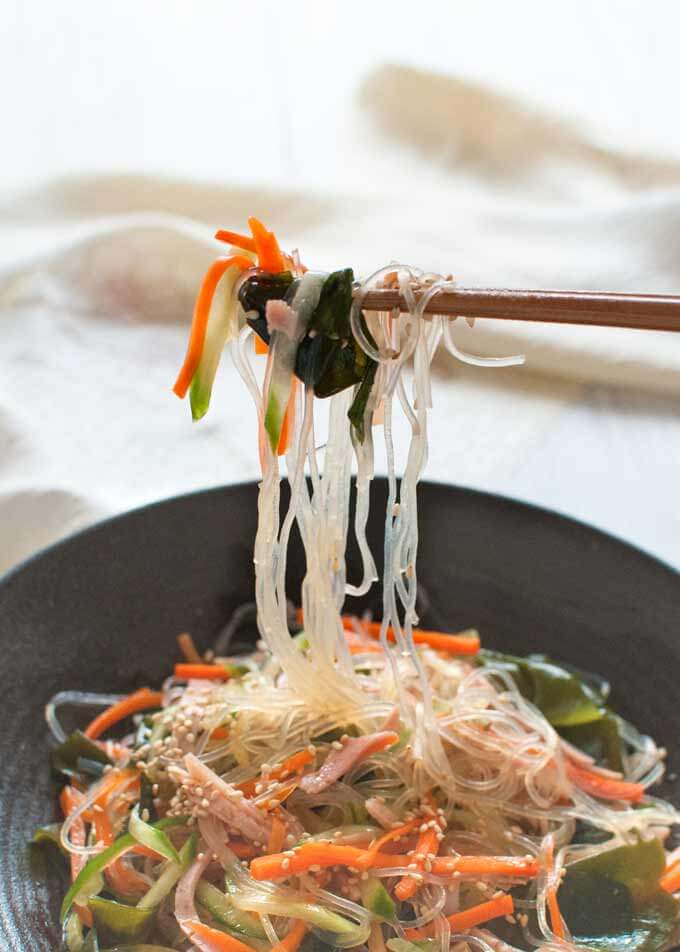 Since vermicelli is made from mung beans and/or potatoes, it fills your stomach more than other fresh salads. I sometimes eat it as a main. 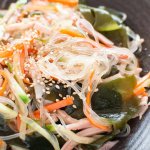 Japanese Vermicelli Salad is a refreshing summery salad with julienned ham, cucumber, carrot and wakame seaweed. It is simple and fast to make. It can also be a main dish just like noodles!

If you are a vegetarian, omit ham or replace it with other vegetables.

Do not get confused with rice vermicelli. They are not the same and become white when rehydrated while mung bean vermicelli is translucent even after being cooked.

2. Non-smoked regular ham is the best. You can substitute with shredded cooked chicken (poached or steamed).

4. Japanese Vermicelli Salad can be kept in the fridge for 2-3 days but the texture of the vermicelli degrades a bit.

Vermicelli salad does not resemble a traditional Japanese salad and the flavour is somewhat closer to Chinese. So, I chose a main dish with Chinese origin. When selecting miso soup ingredients, try to pick vegetables that are not used in other dishes, e.g. eggplants. 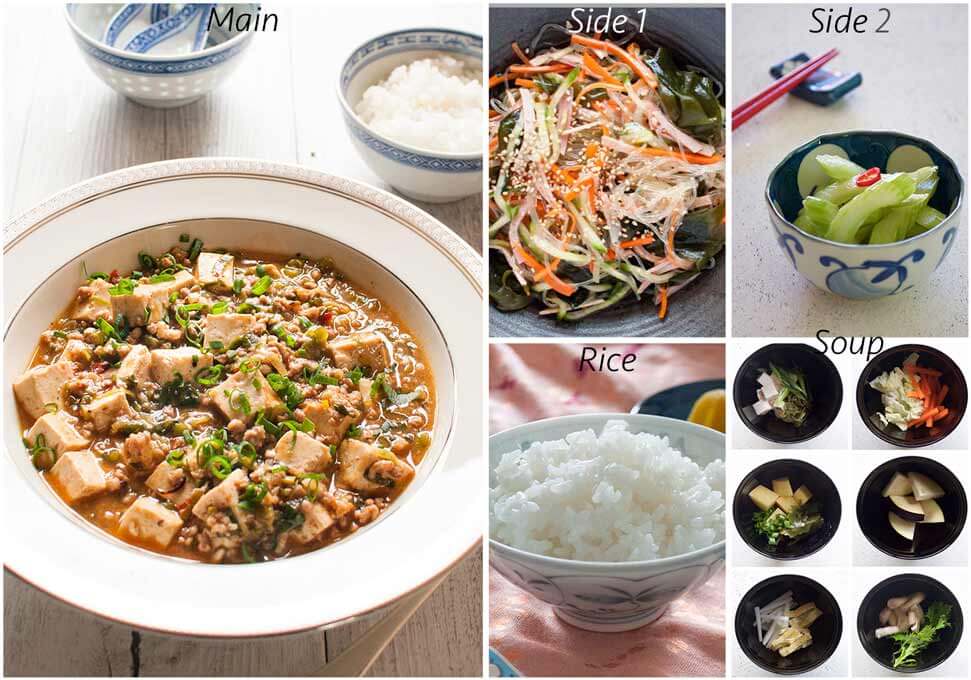