Although I call it Steamed Chicken and Fish, there are more vegetables than chicken and fish in today’s dish. It is almost like a steamed version of Yosenabe. The two dipping sauces give you a dining experience as if you are having two different dishes. 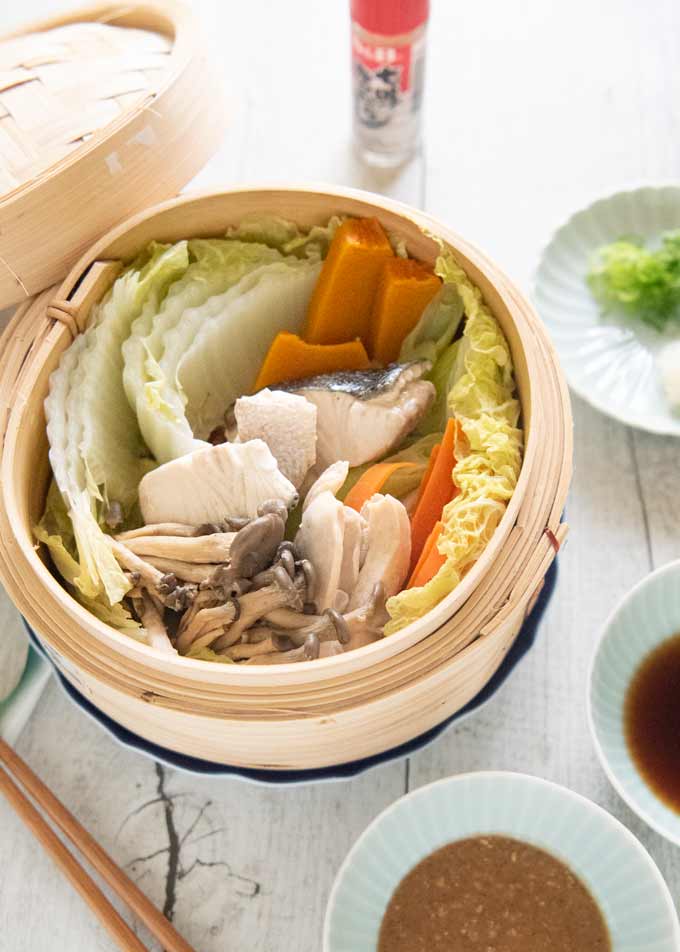 Steaming is one of the best methods of cooking ingredients. Unlike simmering, steaming retains valuable nutrients inside the food. It also keeps the original shape of each ingredient better than cooking in liquid because the ingredients do not move around and bump each other.

I live on my own and every so often after cooking other dishes, I end up with one little piece of chicken or fish fillet left over in the fridge. The quantity of each leftover is too small to make even one serving of a dish.

So I decided to steam them together with lots of leftover vegetables. A steamed dish is a rather plain food without a tasty dipping sauce, so I serve it with two different sauces – ponzu and sesame sauce.

Steamed fish, meat and vegetables are often eaten with ponzu. My recipe, Sakamushi Fish (Steamed Fish in Sake), is also served with ponzu. Japanese people like ponzu, particularly when they are having a hotpot with white-flesh fish. 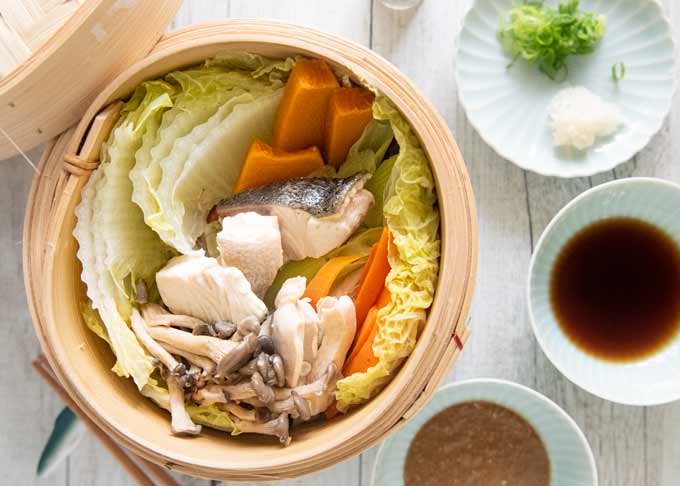 The citrus-flavoured sauce eliminates the fishiness and does not overpower the delicate flavour of the fish.

Strictly speaking, ponzu (ポン酢) is a citrus-based vinegar, which is a yellowish clear liquid. Original citrus-based ponzu was introduced during the time when Japan closed itself from the world for quite a while (1603-1868).

The Netherlands was one of the few countries that could trade with Japan via the port in Nagasaki. Nagasaki people saw Dutch traders drinking an alcohol that was made with a citrus vinegar called ‘pons’.

The alcohol made with pons did not take root among Nagasaki people, but the citrus vinegar did. Because of the sour vinegar flavour, it was named ‘ponzu’ in Japanese, which is a composite of the Dutch word ‘pons’ and the Japanese word for vinegar ‘su’ (酢). ‘Su’ became ‘zu’ for easier pronunciation.

Subsequently, a new sauce was introduced by mixing citrus-based vinegar and soy sauce with seasonings. It was called ‘ponzu shōyu’ (ポン酢醤油) or ‘ajitsuke ponzu’ (味付けポン酢), indicating that it contains soy flavours. 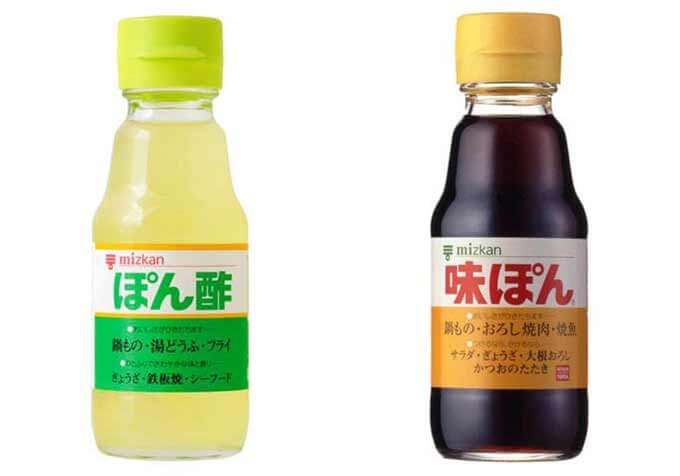 By the way, I searched citrus-based vinegar ponzu in several Japanese grocery stores in Sydney but none of them sells it!

What’s in My Steamed chicken and fish with vegetables

There are no restrictions as to what kind of fish, meat, and vegetables you can include in this dish. I happened to have these ingredients in the fridge: 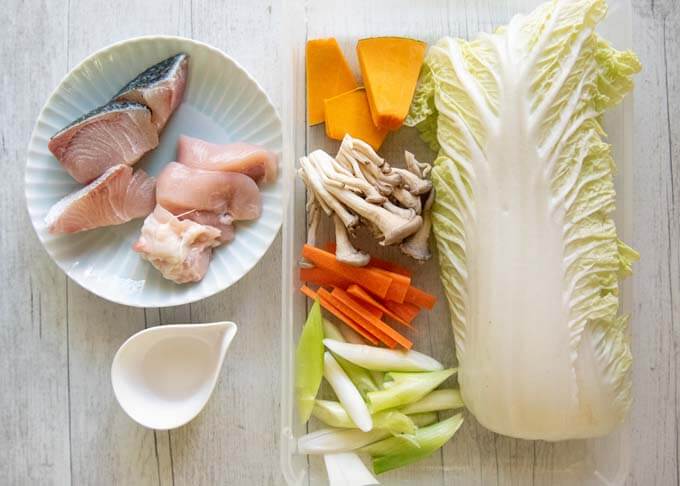 Instead of king fish, you can use any other kind of fish with firm flesh. I used chicken thigh fillet, but you can use breast fillet or chicken tenderloin. Instead of chicken, you can also use thinly sliced pork like those used in Mille Feuille Hot Pot. I think that whitish meat suits this dish better.

You can use any vegetables as long as they are good for steaming. Selecting vegetables of different shapes and colours makes the dish more interesting and pretty.

Cooking sake is used to remove the meat smell from the chicken and the fishiness from the king fish.

Here are the ingredients for the two dipping sauces. 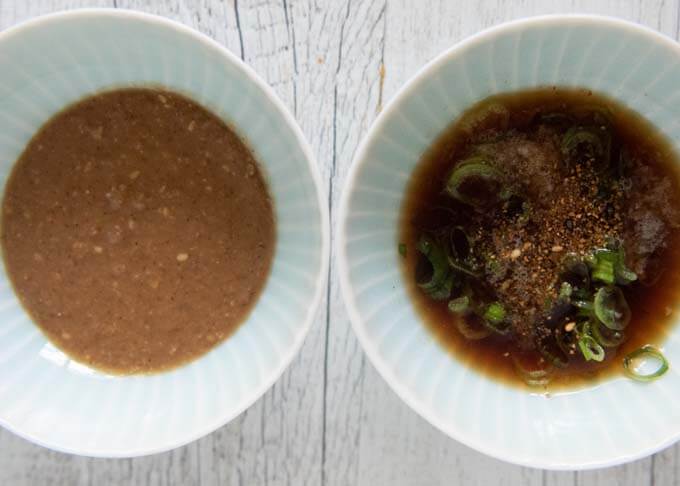 When ponzu is used as a dipping sauce, it usually comes with condiments to mix in. You don’t have to have them all but even just one of them adds something extra to the dipping sauce.

Instead of making ponzu at home, you can buy a bottle of ponzu at Japanese/Asain grocery stores. 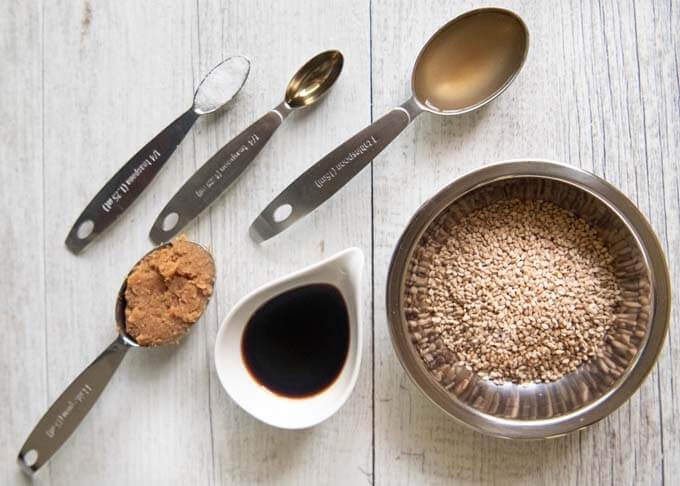 Sesame dipping sauce is called ‘gomadare’ (ゴマだれ) in Japanese. I have a recipe for that in the post Japanese Dressings. But for today’s dish, I replaced mirin with sugar and made the flavour stronger.

How to make Steamed chicken and Fish with Vegetables

The most effort is put into cutting the ingredients that are to be steamed. I used a single serve bamboo steamer (photo below) so that I can serve the dish with the steamer. It also makes the dish look authentic. 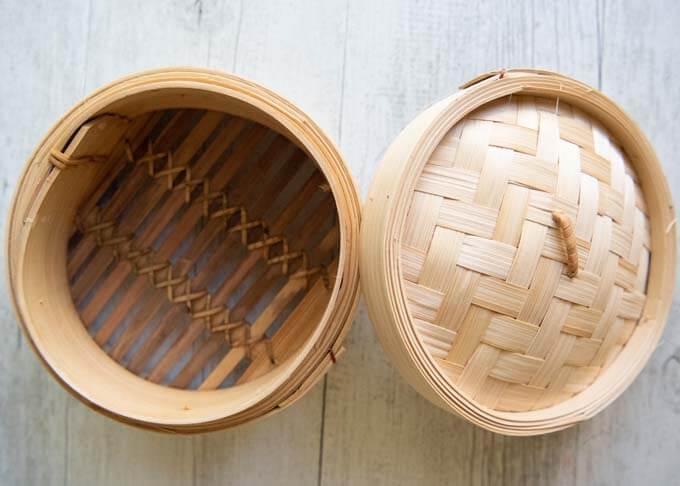 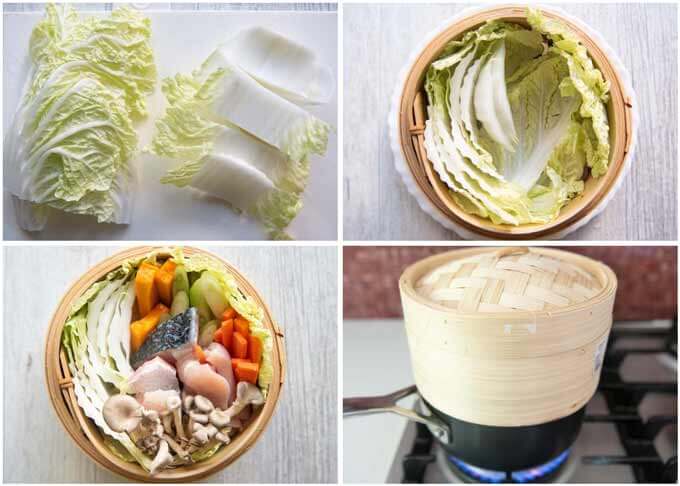 If your steamer pot can be transferred to the table with the food inside, place the pot on a plate and serve it.

If you don’t have a steamer, you can still steam the ingredients by placing a small casserole/gratin dish inside a large pot, lifted with 3 balls of aluminium foil or ramekins of same height.

Steamed Chicken and Fish with Vegetables is a dish that you can serve from the cook top straight to the dining table. You can make it look as if you are dining at a restaurant, particularly if you use a bamboo steamer. It is a perfect dish to use up leftover vegetables! 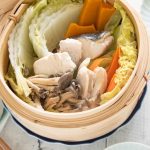 Although this dish is called Steamed Chicken and Fish, there are more vegetables than chicken and fish. It is almost like a steamed version of Yosenabe. Two dipping sauces give you a dining experience as if you are having two different dishes.

I used a single-serve bamboo steamer to steam the ingredients but you can steam them in a different way as described in note 4.

1. Other than ponzu, ingredients (condiments) are optional, but I would recommend at least one condiment to be served with ponzu.

Instead of making ponzu at home, you can buy a bottle of ponzu at Japanese/Asain grocery stores.

2. You can use normal brown miso. If you are using sweet miso, e.g. Saikyo miso, omit sugar.

3. I cut each ingredient into 3 pieces.

4. I used a small bamboo steamer that was just right for one serving.

If you don’t have a bamboo steamer, you can place ingredients in a steamer basket (if your steamer comes with it).

Alternatively place a small casserole/gratin dish inside a large pot, lifted with 3 balls of aluminium foil or ramekins of the same height.

6. I happened to have these ingredients in my fridge. Instead of king fish, you can use any other kind of fish with firm flesh. Meat can be chicken breast fillet, chicken tenderloin or thinly sliced pork.

You can also use other vegetables as long as they are good for steaming.

The two dipping sauces in today’s dish are vinegar-based. So I chose a simmered dish with a slightly sweet flavour for a side dish. You have a sufficient amount of vegetables in the main dish so I think that a small amount of a pickled dish is just right for Side 2. I picked Simple Pickled Celery instead of vinegar-based pickled dishes.

For Soup, I think that clear soup suites this meal better, becasue one of the dipping sauces contains miso. But if you prefer miso soup, no problem. 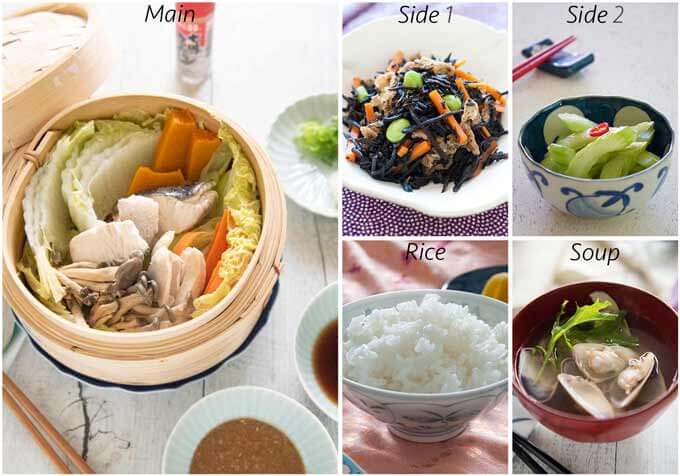