Hot pot recipes are usually easy. Among those easy hot pots, this Mille Feuille Hot Pot is the easiest nabe recipe. Chinese cabbage/nappa cabbage and thinly sliced pork belly are layered, then placed in a pot to look like a large flower. The simple dashi-based broth enhances the flavour of the cabbage and pork. 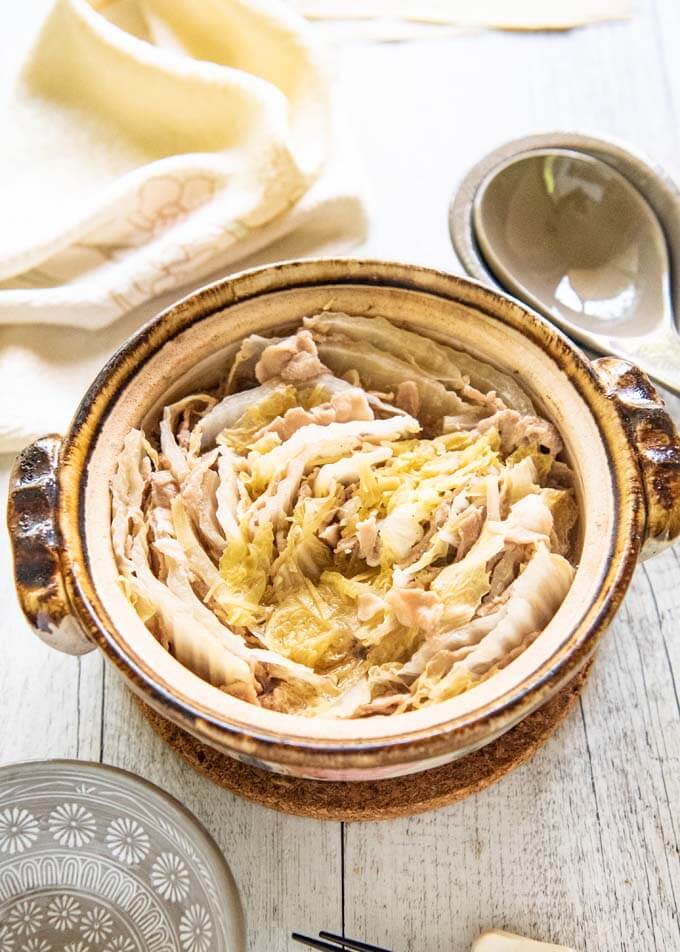 When you Google search ‘mille feuille recipe’, you will find the layered puff pastries with cream. But today’s dish is a savoury hot pot. The French ‘mille feuille’ means thousand leaf. Because the cabbage leaves in the hot pot are layered, Japanese people call today’s dish Mille Feuille Nabe (ミルフィーユ鍋).

It is said that this hot pot became popular after the food corporation, Ajinomoto broadcast a TV commercial for their dashi stock powder in 2010. In the commercial, it was introduced as a layered pork and cabbage hot pot.

But it was subsequently called Mille Feuille Nabe and became very popular. Many things named using foreign words tend to become trendy in Japan, because people think that they sound fancy and “cool”. There are many good reasons why Mille Feuille Hot Pot became popular. 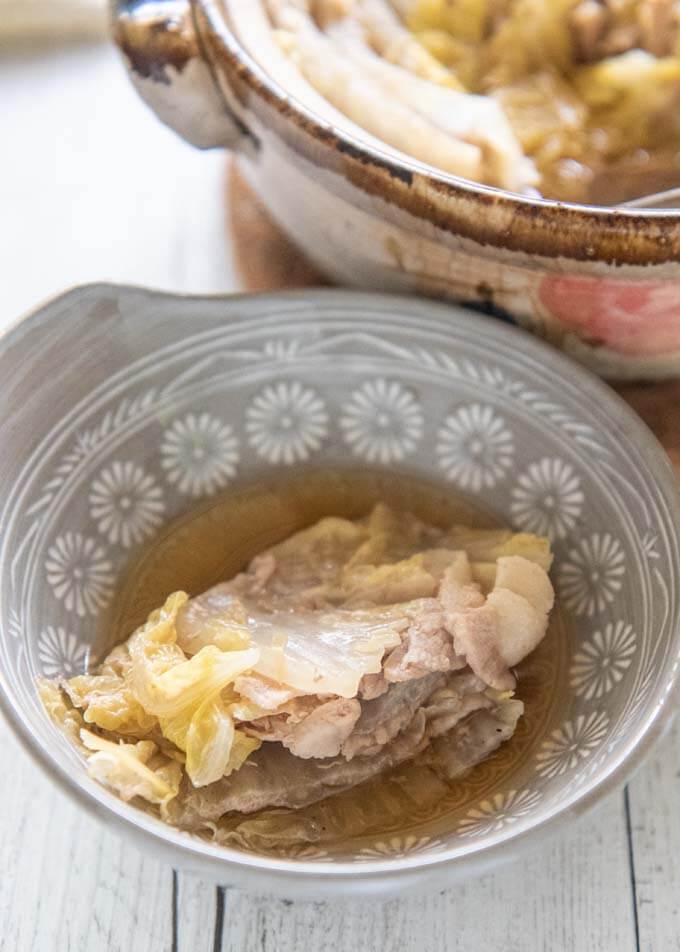 The Australian summer is over, and we are well into autumn. When I see beautiful Chinese cabbage on the shelf of the vegetable shops I have to buy a whole cabbage, even if I am the only person living in my house and it will be too much. I then have to think about Chinese cabbage recipes to use up the whole cabbage.

Today’s dish, Mille Feuille Hot Pot (Nabe) with Pork and Chinese Cabbage can consume quite a bit of Chinese cabbage.

The mille feuille is made of just Chinese cabbage leaves and thinly sliced pork belly. The broth to cook the cabbage and pork has more ingredients!

The number of leaves and pork slices are approximate. You can increase the quantity of pork if you wish but be careful not to add too much meat as the balance between the cabbage and pork is important.

The thickness of the pork belly should be 2-3mm / 3⁄32-⅛”. Thinner than this, like shabu-shabu slices, is OK as you can layer the slices. But I would not recommend using pork slices any thicker than, say 4mm thick because you only cook it for 10 minutes and the meat can be a bit tough. 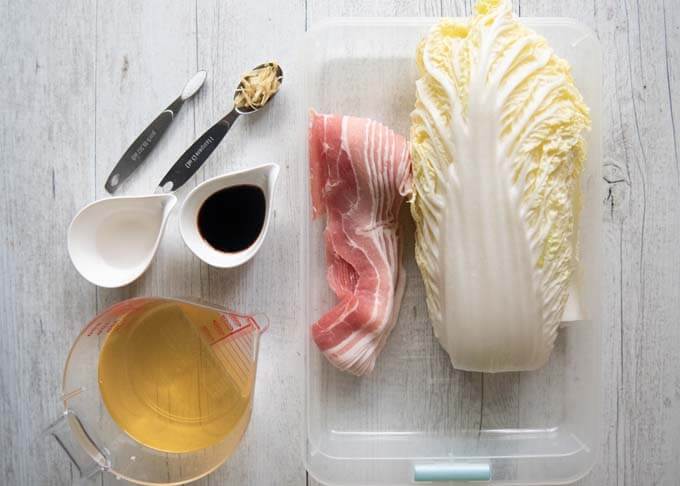 Ponzu is often served with this hot pot as a dipping sauce. You can buy a bottle of ponzu at Japanese/Asian grocery shops, but it is very easy to make at home. You can find the recipe for home-made ponzu here.

Most of the effort is in layering the Chinese cabbage leaves and the sliced pork belly. 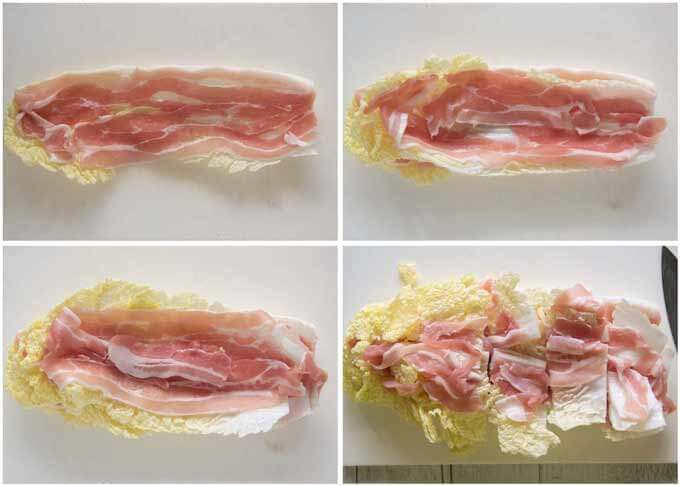 Cutting the layered leaves with the pork between them is quite a challenge as the pork can slide around. You need to hold the entire mille feuile tight and gently cut it. Even if it becomes a bit messy like the photo above, that’s OK.

About a Pot for Mille Feuille Nabe

Unlike other hot pot dishes, the ingredients of today’s dish need to fit snuggly in a pot so that the patterns of the mille feuille that are carefully made does not disintegrate when cooked.

I used a small clay pot specifically made for a single serve hot pot. The diameter of this pot is about 18cm /71⁄16″, in which my mille feuille can snuggly fit.

It does not have to be a clay pot, but the size of the pot needs to be just right so that the layered cabbage and pork can fill the pot without gaps. 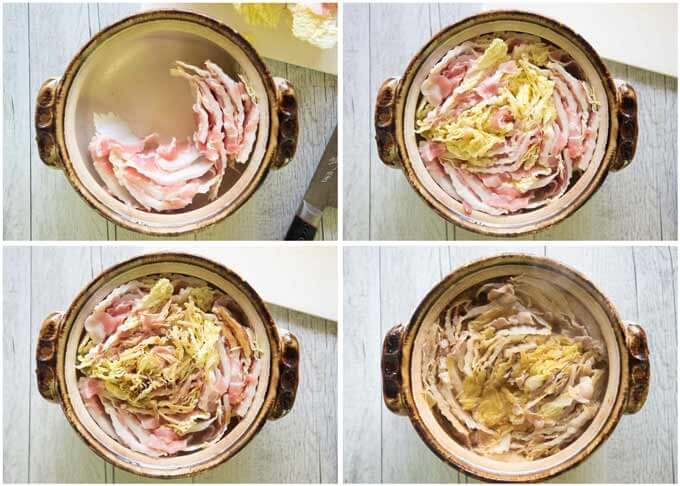 When placing the layered pieces in a pot, try to make a regular pattern. I placed the pieces on the outer edge of the pot first, then filled in the centre. This makes the mille feuille look like a circular pattern.

There are no rules as to how to place them, except that the cut side should be facing up to show the layers of mille feuille. I saw some recipes that made a windmill pattern. 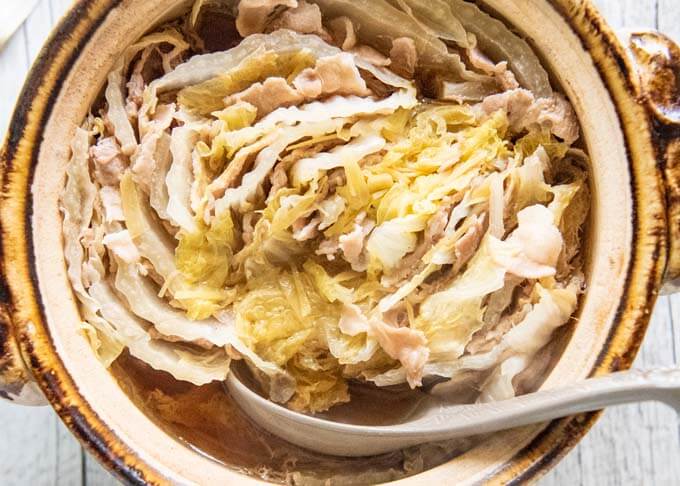 I think today’s hot pot is a bit different from the typical hot pot dishes, perhaps because it is not really an interactive meal. Unlike Shabu-shabu Hot Pot and Sukiyaki, you do not place ingredients into the broth yourself and pick them up when ready to eat. 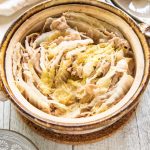 Hot pot recipes are usually easy. Among those easy hot pots, this Mille Feuille Hot Pot is the easiest nabe recipe. Chinese cabbage/nappa cabbage and thinly sliced pork belly are layered, then placed in a pot to look like a large flower. The simple dashi-based broth enhances the flavour of the cabbage and pork.

If you cannot buy sliced pork belly, you can slice a block of pork belly yourself. Before slicing, freeze the block for 1 hour. The surface of the pork freezes and you will find it easier to slice the pork thinly. Without freezing it, it is almost impossible to slice very thinly.

2. Use wide leaves. If you buy a half or a quarter Chinese cabbage/nappa cabbage, the leaves on the edge of the cut cabbage are vertically halved and very narrow. Avoid those narrow leaves. Try to pick either full-size leaves or vertically cut but wide leaves.

My sliced pork belly came in very long strips. I cut them shorter to adjust the length and some layers ended up with bits and pieces of short pork slices. But it doesn't matter at all.

4. Cutting the layered leaves with the pork between them is quite a challenge as the pork can slide around. You need to hold the entire mille feuile tight and gently cut it. Even if they become a bit messy like the photo above., that’s OK.

5. After you finish eating the mille feuille, add some rice to the remaining broth in the pot and make Zosui (Japanese Rice Soup – Ojiya).

Today’s main dish Mille Feuille Hot Pot contains a small amount of protein. But when you make Zosui with the left-over broth, you add an egg. So you want the other dishes to be mainly vegetables.

To give a variety of flavours to the meal, I picked a dish with a vinegar flavour and a sesame-flavoured dish. 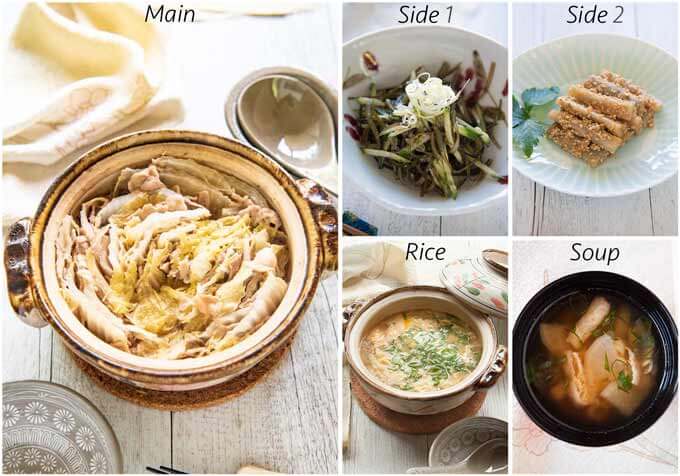