When you eat a mouthful of Shrimp Flavoured Steamed Eggplant, you will be amazed that simple steamed eggplant can taste so good. The sauce mixed with the toppings contains plenty of umami from the dried shrimp. It is by far the most flavoursome steamed eggplant in my view. 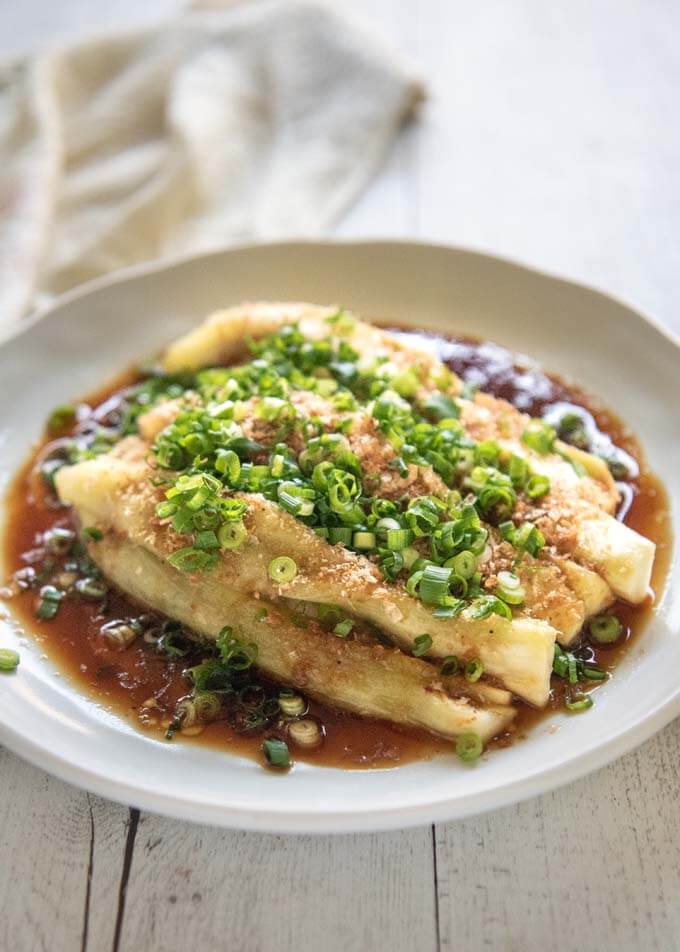 But the shrimp flavoured sauce in today’s dish brings a plain steamed eggplant up to the next level. The sauce is so tasty.

Dried shrimp are sun-dried shrimp and usually very small (about 1.5cm / ⅝”). They are widely used in Asian countries including Japan.

There are two distinct types of dried shrimp you can buy from Asian grocery stores.

The Japanese version of paper-thin baby shrimp has a pretty name, ‘sakura ebi’ (桜海老), which means cherry blossom shrimp. It gained such a name due to the reddish pink colour of the shrimp (see the photo below).

To distinguish the paper-thin dried shrimp from the meaty ones, they are called ‘hoshi sakura ebi’ (干し桜海老) and ‘hoshi ebi’ (干し海老) in Japanese respectively. The word ‘hoshi’ (干し) means dried and ‘ebi’ (海老) is shrimp. 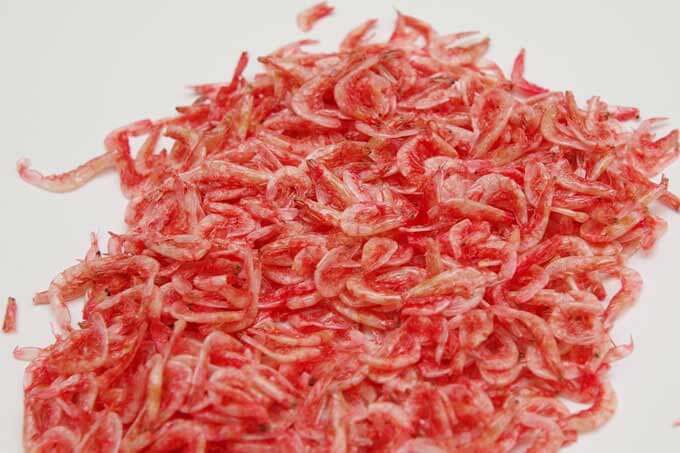 In Sydney, I could not find sakura ebi anywhere. But I found dried paper-thin shrimp from Asian grocery stores that are similar to hoshi sakura ebi. The Korean version of paper-thin dried shrimps, which I used today, is close to the Japanese version. The colour of the shrimp is a bit different, though.

With the exception of the eggplant, all ingredients in the list below are for the sauce and toppings to go over the eggplant. 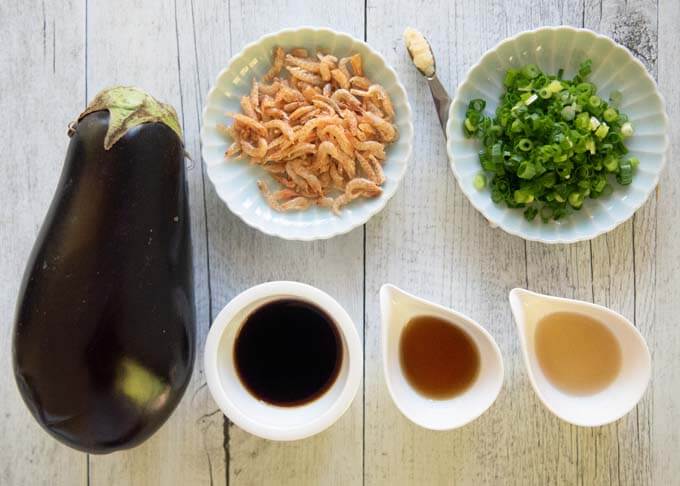 The eggplant can be large eggplant (most commonly available eggplant in Australia), long skinny eggplant, or short eggplant.

The dried shrimp are grated into powder. So, you need paper-thin dried baby shrimp, not meaty dried shrimp.

This is a very simple dish and takes only the time to cut and steam the eggplant. 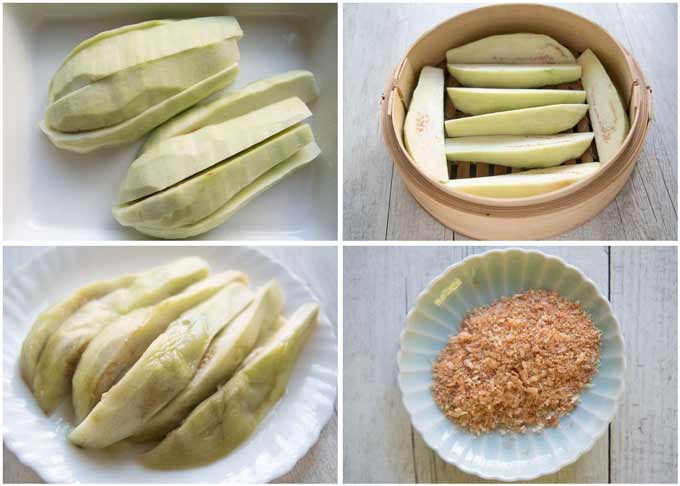 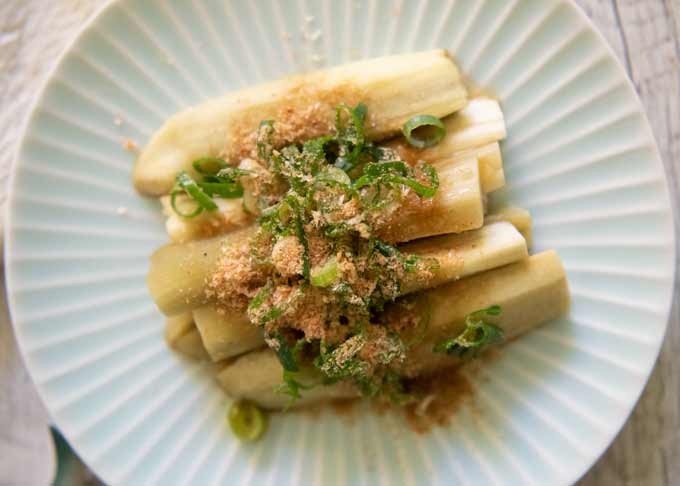 What to do with leftover Paper-thin Dried Shrimp

There are many uses for dried shrimp, although I have never used them in the recipes I have published so far.

Firstly, dried shrimp can keep about a month in the fridge. You can also freeze them for a few months. They are so thin that you can use the frozen dried shrimp without thawing when cooking.

Dried shrimp are sometimes added to Okonomiyaki. Using my Okonomiyaki recipe, scatter dried shrimp instead of (or in addition to) the bonito flakes put on the sliced pork. It will boost the umami flavour of your Okonomiyaki.

You can also scatter dried shrimp over stir-fried noodles such as Yakisoba and Yaki Udon.

In my Kakiage (Mixed Vegetable Tempura) recipe, I used dried anchovies mixed with vegetables. You can use dried shrimp instead of anchovies. The Kakiage will have quite a different flavour.

When I have an opportunity, I will post some dishes using dried shrimp. 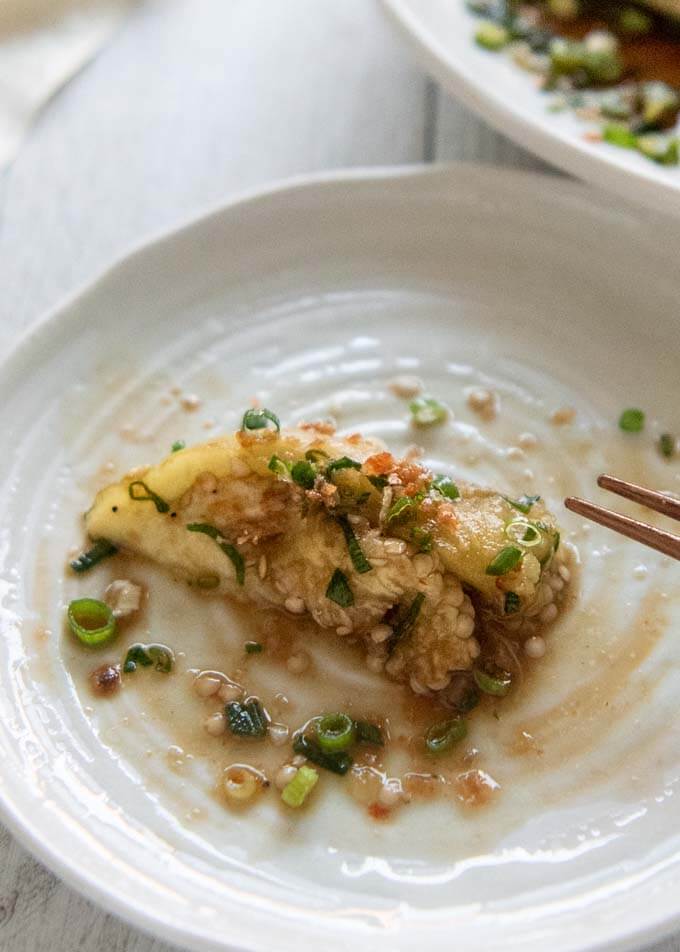 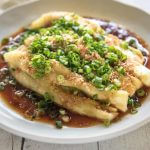 When you eat a mouthful of Shrimp Flavoured Steamed Eggplant, you will be amazed that simple steamed eggplant can taste so good. The sauce and the toppings are packed with umami from the dried shrimp. It is by far the most flavoursome steamed eggplant in my view.

NOTE: In making my Shrimp Flavoured Steamed Eggplant, I referenced the recipe in the Japanese cooking website, ORYOURIMATOME, https://oryouri-matome.com/easy-good/recipe1027.html. The quantity of the ingredients was changed to suit to my palate. The original recipe uses a microwave to steam the eggplant, but I changed it to use a steamer. However, I have included the microwave method in the notes.

1. Instead of large fat eggplant, you can use skinny eggplant or short eggplant.

2. Paper-thin dried shrimps are called ‘sakura ebi’ (桜海老) in Japanese. They are different from the meaty dried shrimps (see the photo in the post comparing these).

In Sydney, you probably can't find sakura ebi. But you can buy paper-thin dried shrimp at Asian grocery stores that are similar to sakura ebi. I used dried shrimp made in Korea in this recipe. Please see the sample photos in the post.

3. The original recipe called for 3 teaspoons, but I found that it was a bit too salty to my palate. You can always measure 2 teaspoons, then add extra later if necessary.

4. If you don’t have shiro dashi, I recommend using a strong dashi stock combined with mirin and salt instead. In place of ½ tbsp of shiro dashi, combine ⅛ tsp granular dashi powder, ½ tsp warm water, ½ tsp mirin, and a pinch of salt.

5. If you prefer shorter wedges, you can halve the length of the wedges.

6. Instead of using a steamer to cook the eggplant pieces, you can microwave them. But the steamer cooks the eggplant more evenly than a microwave.

To cook eggplant using a microwave, spread the eggplant pieces on a microwave-safe plate without overlapping, splash on a small amount of water, then cover with cling wrap. Microwave for 7 minutes at 600W.

Eggplant is a summer vegetable, although it is sold all year round these days. Today’s dish is therefore not served hot, but at room temperature or cold.

For today’s meal idea, I thought it would be good to pick the dishes that are great to serve in summertime. Simple Salt Chicken Rolls are perfect for that. You can make them ahead and keep them for 5 days in the fridge. Tataki Kyūri is also a summer dish. 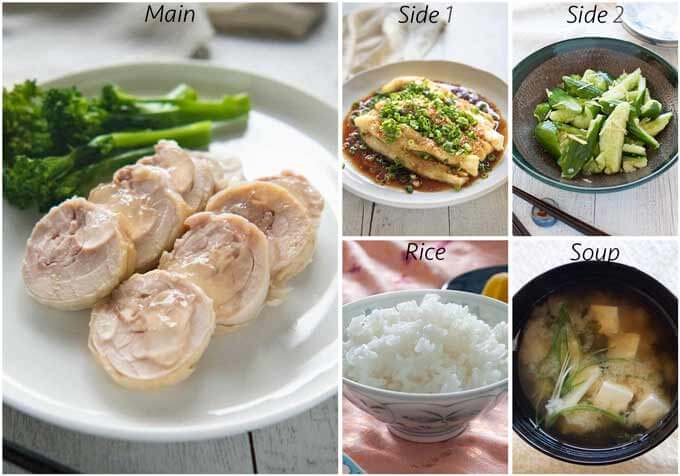