The simplest eggplant recipe and a delicious appetiser/side dish, Grilled Japanese Eggplant is called ‘Yaki Nasu’ in Japanese. The perfectly grilled eggplant is traditionally eaten with ginger, bonito flakes and some soy sauce. The eggplant melts in your mouth. 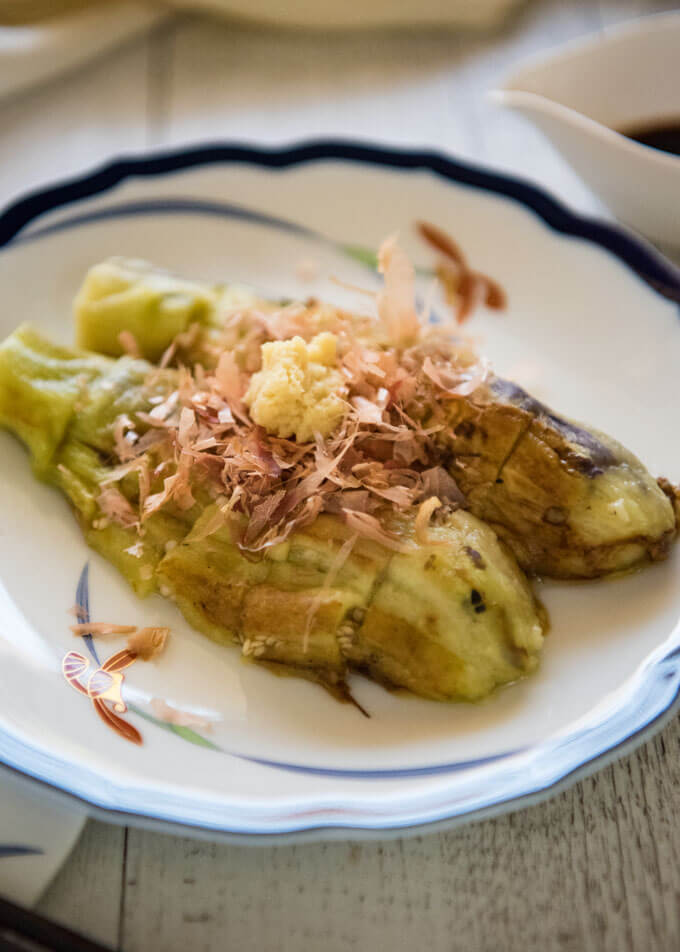 Western-style grilled eggplant dishes are made by cooking sliced eggplant over the grill, making the distinct charred lines on the eggplant pieces.

But Grilled Japanese Eggplant looks quite different. It is made by grilling a whole eggplant with the skin on until the flesh inside the skin becomes soft. Peel the skin off, then cut the flesh into bite size pieces.

Japanese eggplant is not very large. It is about 10cm/4” long and 4cm/1½” wide, unlike Aussie standard eggplant/American eggplant that can be 10cm/4” wide and 15cm+/6” plus long.

Small eggplants are perfect to make Yaki Nasu because of the way Yaki Nasu is grilled and served. 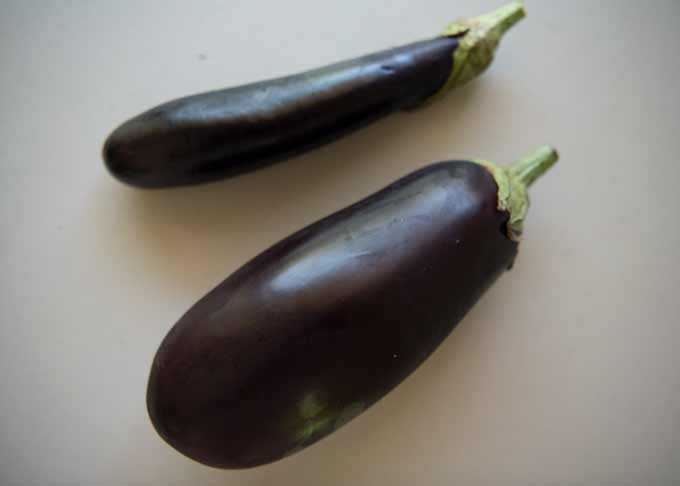 Large eggplants like the Australian standard eggplant can be grilled but it will take much longer to cook through the flesh. Also, the smoky flavour from the burnt skin does not penetrate sufficiently due to the thickness of the flesh.

How to Grill Eggplants

Before grilling, you need to prepare the eggplant so that it becomes easier to peel the skin off after grilling it. Place a knife crosswise at the top of the eggplant, just below where the fruit starts. Then move the knife around the eggplant to make a shallow incision (see the photo). 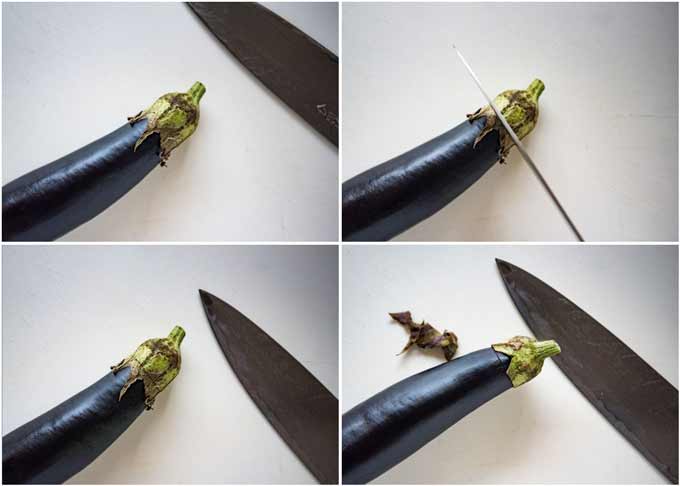 This will serve two purposes:

The tip of the eggplant needs to be intact but if the stem at the tip is very long, trim it to minimum length.

When the incision is made, place the whole eggplant on a grill at medium to medium-high heat and cook for about 10 minutes (for small eggplants). Rotate the eggplant a couple of times is that it cooks evenly and the skin gets burnt evenly.

The fastest way to cook eggplant is to grill it with direct heat. It is OK for the skin to burn as the skin will be peeled off before serving. It is actually preferable to burn the skin so that the eggplant flesh gets a bit of smokiness. 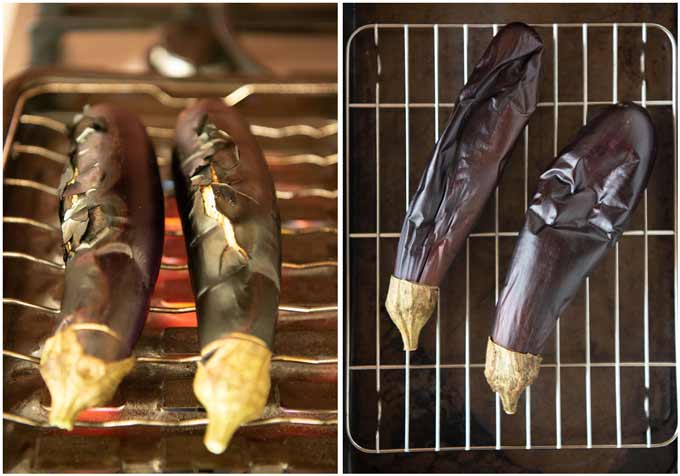 There are few methods of grilling eggplants:

I like the first two methods above as the eggplant skin gets charred with flames (I use a gas stove), infusing a smoky flavour into the flesh of the eggplant better.

You could use a griddle or a frying pan but it might take a bit longer to cook.

When you gently squeeze the grilled eggplant, you should feel that the flesh inside is very soft. As soon as the heat is turned off, the eggplant starts to get wrinkly. This is normal.

While the eggplant is still hot, pinch the top of the skin where the circle incision was made and peel a strip of skin off. Repeat until the skin is completely removed.

Remove the stem part (you can’t eat it) and cut the flesh into bite size pieces. If I was using a large eggplant, I would quarter the eggplant vertically, then cut the quarters into 2-3cm/1” wide pieces. 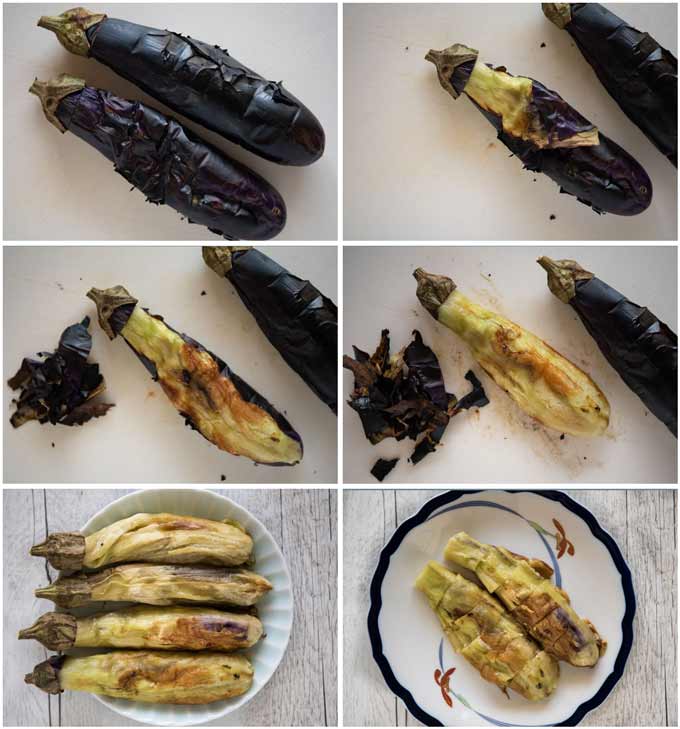 Garnishes to go with Grilled Eggplants

The most commonly used garnishes are grated ginger and/or bonito flakes. I like both. Sometimes I also add finely chopped shallots/scallions, but I think that only a small amount of shallots is sufficient. Too much overpowers the eggplant taste with a strong shallots smell.

I usually place bonito flakes, then grated ginger on top of eggplants. If adding shallots, I would  sprinkle them over it. 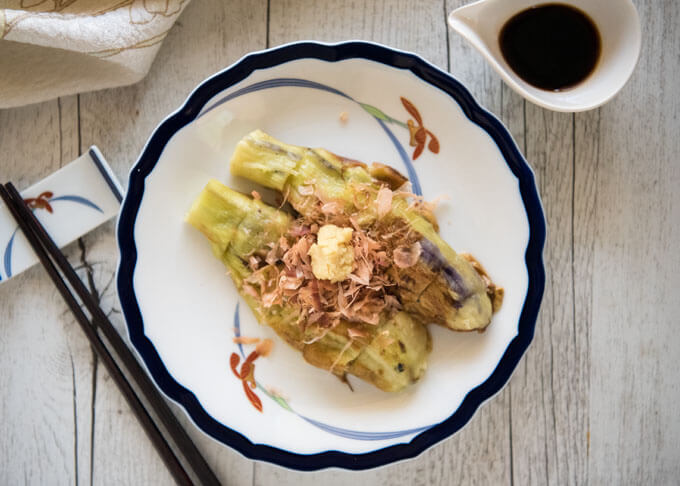 Yaki Nasu can be served warm, at room temperature or cold. You can even make it the day before and keep it in the fridge until you serve it.

Summer days in Japan can be very hot and humid which reduces people’s appetite. I used to have chilled Yaki Nasu on such day with Chilled Tofu (Hiyayakko) and Somen (Japanese Cold Noodles) to feel cool. 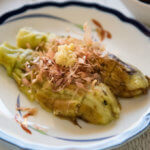 A very easy and delicious appetiser/side dish, Grilled Japanese Eggplant is called ‘Yaki Nasu’ in Japanese. The perfectly grilled eggplant is traditionally eaten with ginger, bonito flakes and a little bit of soy sauce. The eggplant melts in your mouth.

Omit bonito flakes to make it a vegetarian dish.

1. Small eggplants are perfect to make Yaki Nasu because of the way Yaki Nasu is grilled and served. If you can find Japanese eggplant, that would be the best. Otherwise, try smaller eggplants with the thickness of no larger than 4cm/1½”.

Where I live, vegetable shops and even supermarkets do sell thin eggplants, which can be anywhere between 10-15cm/4-6” long. I use them when I make Yaki Nasu.

If you can only find a large eggplant, i.e. standard Aussie eggplant/American eggplant, you will only need one eggplant for 2-3 servings, but you will need to grill much longer to cook through the flesh.

When I grilled a large eggplant under the broiler, it took me close to 30 minutes. It is important to turn the eggplant around for faster cooking. I turned it over after 10 minutes, then after another 10 minutes, I rotated 90 degrees. Cook few minutes, then turn it over to cook the other side for few more minutes.

2. I picked these heating methods so that the eggplant skin will burn nicely. You can also use a broiler/oven griller to get a similar effect. Cooking time is also similar.

You can use a griddle or frying pan as a last resort. It might take a bit longer to cook and the smokiness might be much less than the other methods, but you can still cook the eggplants through.

3. If you are making Yaki Nasu with a large eggplant, quarter the eggplant vertically first, then cut it into bite size pieces.

4. If serving your eggplants chilled, keep the grilled eggplants ready to serve in the fridge, without toppings. Add toppings at the time of serving.

5. If serving as an appetiser, one eggplant per serving should be sufficient.

6. Nutrition per serving, not including soy sauce.

Yaki Nasu is quite a refreshing light dish. Stir fry dishes or deep-fried dishes go perfectly with it. For Side dish 2, I picked Goma-ae to add a different flavour to the meal. But this can be replaced with any other side dish. If you are having Yaki Nasu in the summer time which is often the case in Japan, Chilled Tofu (Hiyayakko) might go better with it. 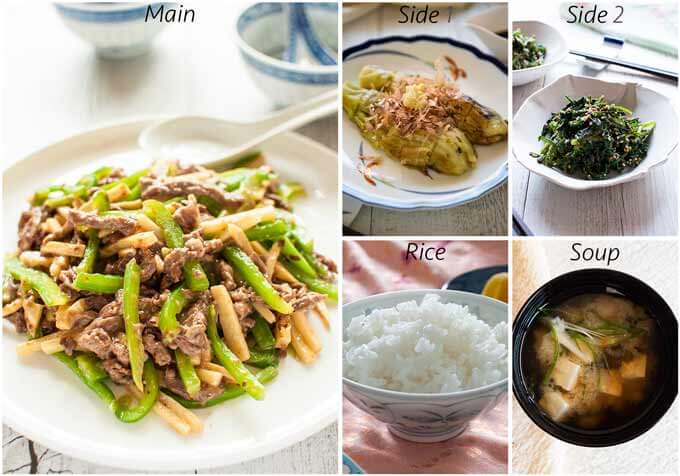