Home » All Recipes » Maguro no Zuke-don (Marinated Tuna on Rice)

A super easy meal with sashimi quality tuna is one of my favourites. Maguro no Zuke-don (Marinated Tuna on Rice) requires no cooking. Just marinate tuna slices and place them on the cooked rice, topped with garnish. I always wonder how such a simple dish could be so tasty. If you add a salad and a miso soup, you’ll have a perfect meal in no time. 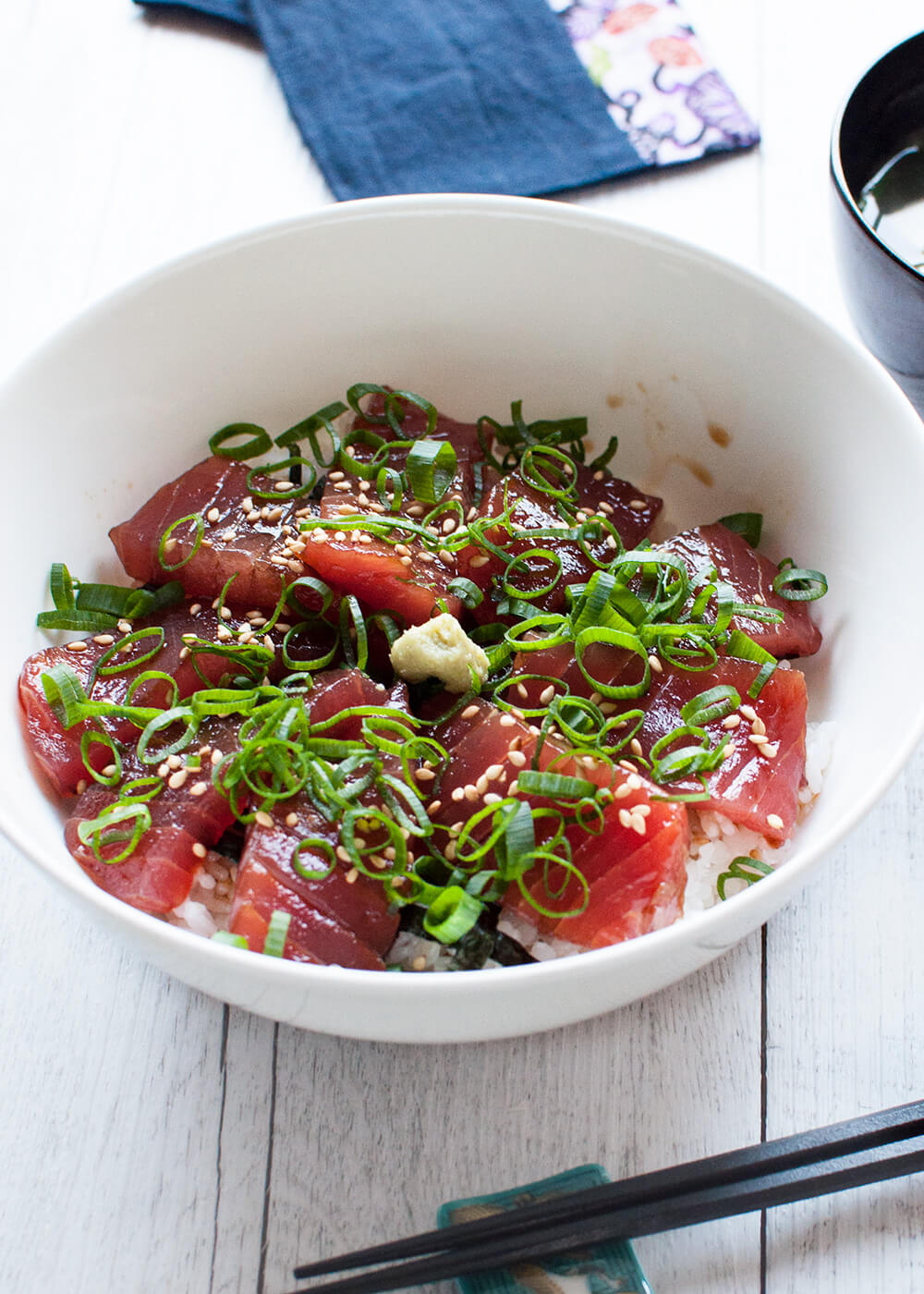 I love sashimi of any kind. I like the flavour of fresh raw fish but I also like the fact that it is so easy to prepare without needing to cook at all. High in protein, low in fat, what else can you ask for? I could eat sashimi every day, even for breakfast. When I go shopping and I am wondering what to eat for dinner, I often end up buying a small amount of sashimi.

If I was in Japan, perhaps I could eat different sashimi fish every day, but here in Sydney the varieties are limited. Most local fish shops sell only tuna and salmon sashimi, or sometimes kingfish. Only a few fish shops and the Sydney Fish Market sell other kinds of sashimi quality fish such as snapper, deep sea bream and trevally.

When I feel that I have been eating tuna or salmon sashimi repeatedly, I sometimes put a twist on the tuna sashimi and make maguro no zuke-don (マグロの漬け丼). Maguro (マグロ) means tuna and zuke-don (漬け丼) means marinades on rice in a bowl. The word “no” (の) is a particle to connect maguro and zuke-don. 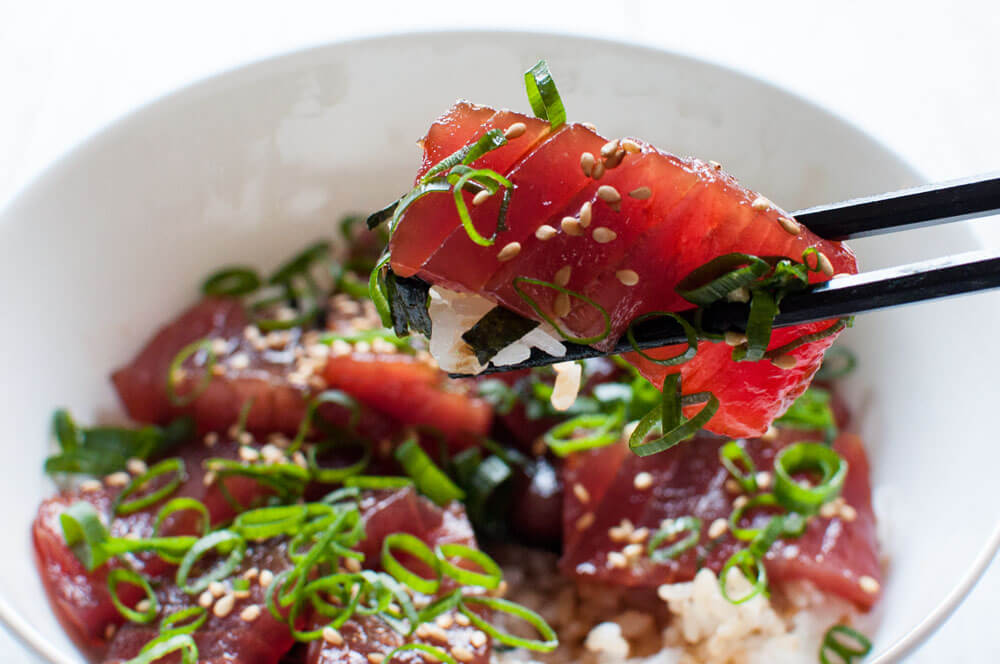 When I posted the recipe Oyako-don (chicken and Egg on Rice), I talked about ‘don’ (丼) and mentioned ‘tekka-don’ (鉄火丼, tuna sashimi on rice) as an example. Tekka-don is also tuna on rice in a bowl, but there are differences.

Tekka-don uses raw sashimi tuna slices without marinating them and the rice is vinegar flavoured (= sushi rice), while zuke-don uses marinated sashimi slices that are placed on normal rice. You will need a small plate of soy sauce to dip the sashimi in when eating tekka-don but zuke-don does not require a dipping sauce.

Some people do not distinguish between these names and call maguro no zuke-don “tekka-don”. But strictly speaking, that is not correct.

Today, I saw a block of sashimi tuna at my favourite fish shop. The tuna was really fresh and had beautiful red meat (see the top left photo below), which reminded me of tekka-don. The name “tekka” (鉄火) comes from the colour of a hot iron and the tuna at the fish shop was so red that I couldn’t think of any other word. But I only had normal rice so I decided to make marinated tuna on rice instead.

Zuke-don marinade is a mixture of soy sauce, sake and mirin. The ratio I used is 3:2:1 respectively which is easy to remember. I sometimes add a few drops of sesame oil to it. Marinate the sliced sashimi tuna for a minimum of 10-15 minutes but no more than 30 minutes. If you marinate sashimi slices for too long, the sashimi absorbs too much marinade and the flavour of the sashimi becomes too salty. 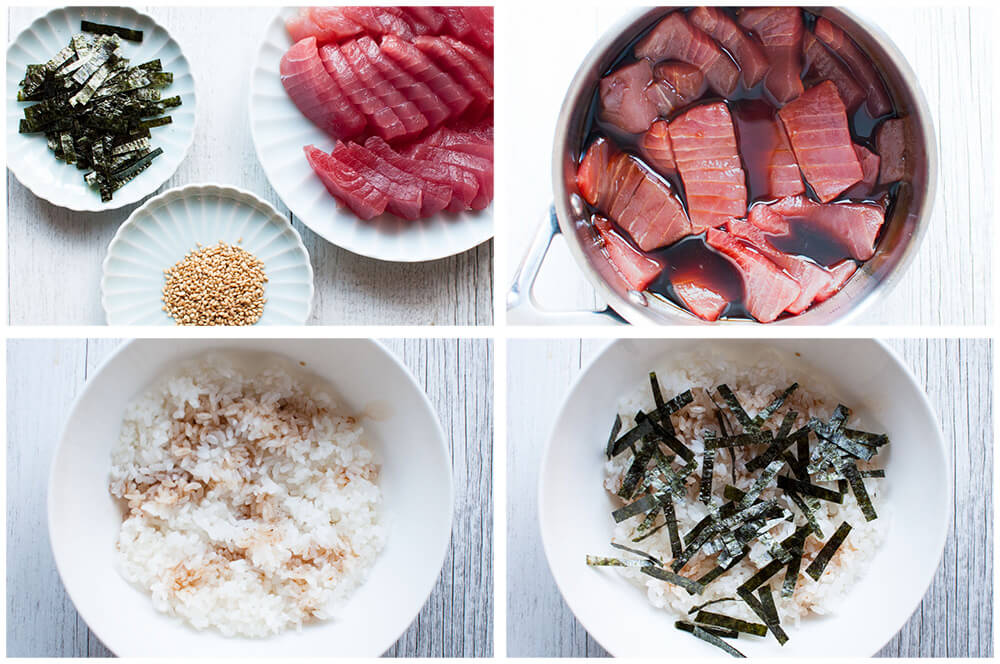 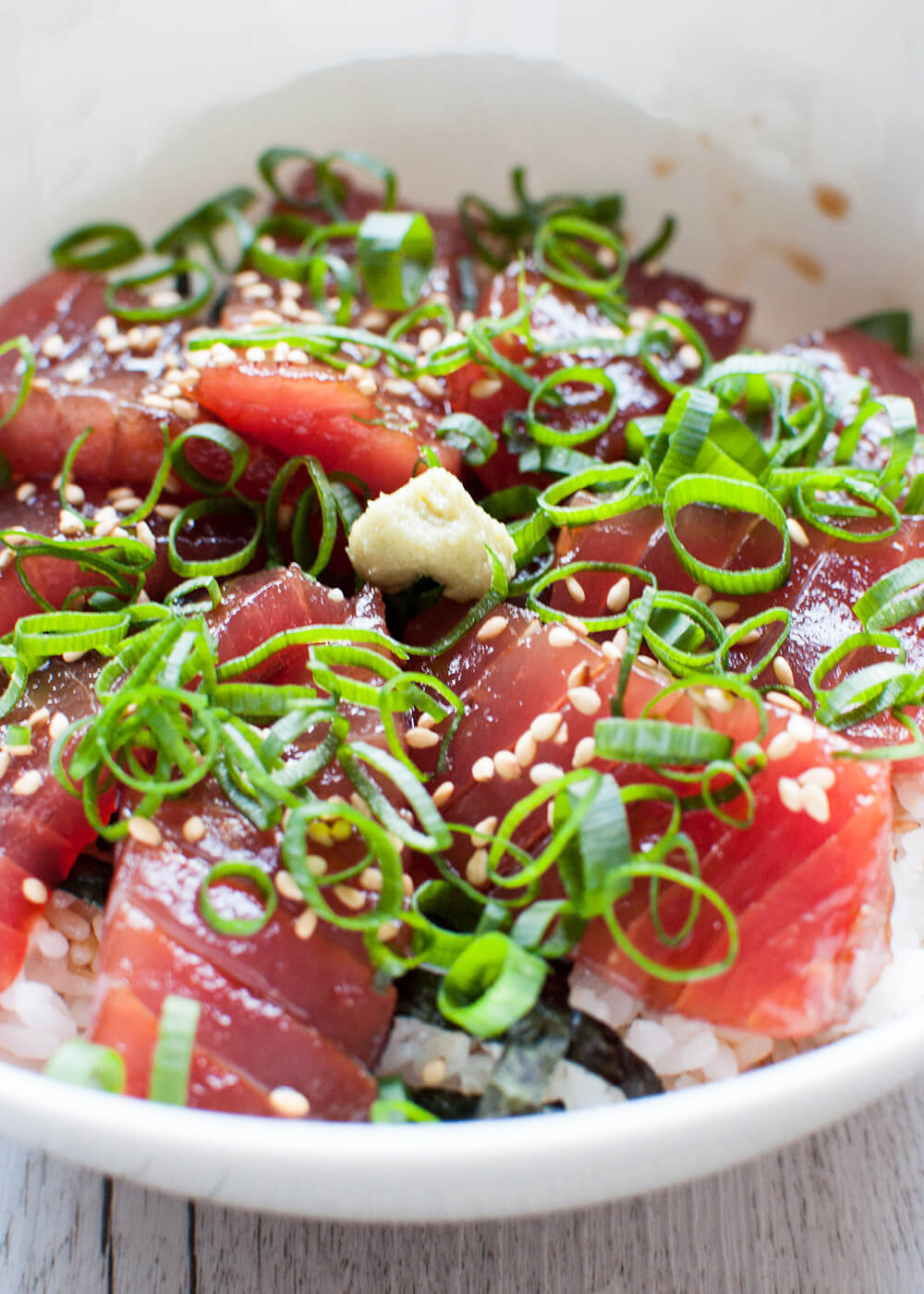 Instead of tuna, you could use salmon, bonito, kingfish, etc if you like. If you marinate kingfish sashimi for example, then it will be called “buri no zuke-don” (ブリの漬け丼) as kingfish is “buri” in Japanese.

You must buy sashimi quality fish, though. When I make zuke-don with bonito or kingfish, I might add a small amount of grated ginger to the marinade so that the slight fishiness can be eliminated.

It is so simple to make that I cannot write about the dish any more today. If you like sashimi, I strongly recommend making maguro no zuke-don. 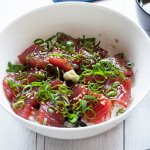 A super easy meal with sashimi quality tuna is one of my favourites. No cooking is required. Just marinate tuna slices and place them on the cooked rice, topped with garnish. I always wonder how such a simple dish can be so tasty. If you add a salad and a miso soup, you have a perfect meal in no time.

Prep Time includes 15 minutes of marinating time. So, the actual time you spend on this dish is about 10 minutes.

1. Instead of tuna, you could use salmon, kingfish, bonito, deep sea bream, trevally, etc. But you do have to purchase a sashimi quality fish.

2. A standard Japanese-style rice bowl would be too small as the tuna slices are placed on top of the rice. You could use a soup bowl or noodle soup bowl instead.

The rice can be hot or room temperature.

3. Instead of placing yakinori below the tuna slices, you can place the tuna first, then scatter yakinori, if you like.