Chinjao Rosu is a Japanese stir fry which is quick to make. This beef and bamboo shoots recipe is originated in China with just beef and capsicum (green peppers) but adding bamboo shoots makes it different from the original dish. Beef, bamboo shoots and capsicum are cut into thin strips and cooked in soy flavoured sauce with a touch of oyster sauce. 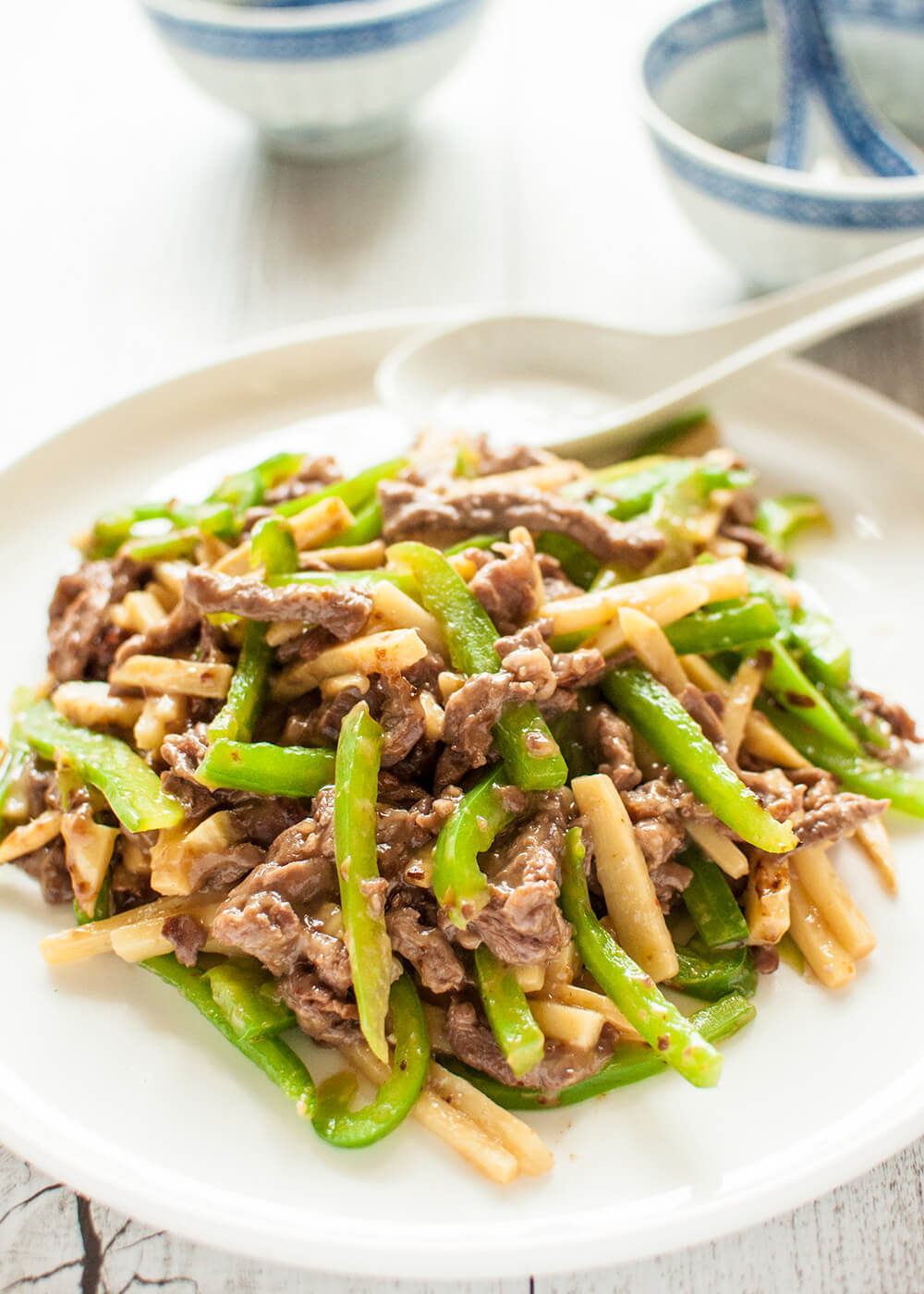 This Chinese dish is very popular among Japanese people along with Mabodofu (Mapo Tofu). Just like any other Japanese-style Chinese dish, I am sure the flavour of the dish is different from the original, qīngjiāo ròusī (I don’t know how to pronounce this but it must be close to the Japanese pronounciation of this dish).

I searched the internet using this Chinese dish name and found a recipe (but written in Chinese, of course!). Well, some Chinese characters are similar to the Japanese kanji characters so I could guess some of the ingredients such as pork, ginger, garlic, soy sauce, sake, sesame oil, sugar, and water.

With the translation tool, I worked out that the original dish was made with just pork and capsicum (green peppers) and, unlike my recipe, the sauce did not include oyster sauce. To tell you the truth, I did not use oyster sauce initially because it did not exist in my household. It’s only after the children became adults and more authentic spices and sauces got introduced that I used it.

The Japanese version of chinjao rosu (チンジャオロースー) is made of beef, bamboo shoots and capsicum (green pepper). They are cut into thin strips of similar size. Because the beef strips turn out dark brown when cooked, I think that adding bamboo shoots makes the dish more colourful.  It also gives a different texture to the dish. 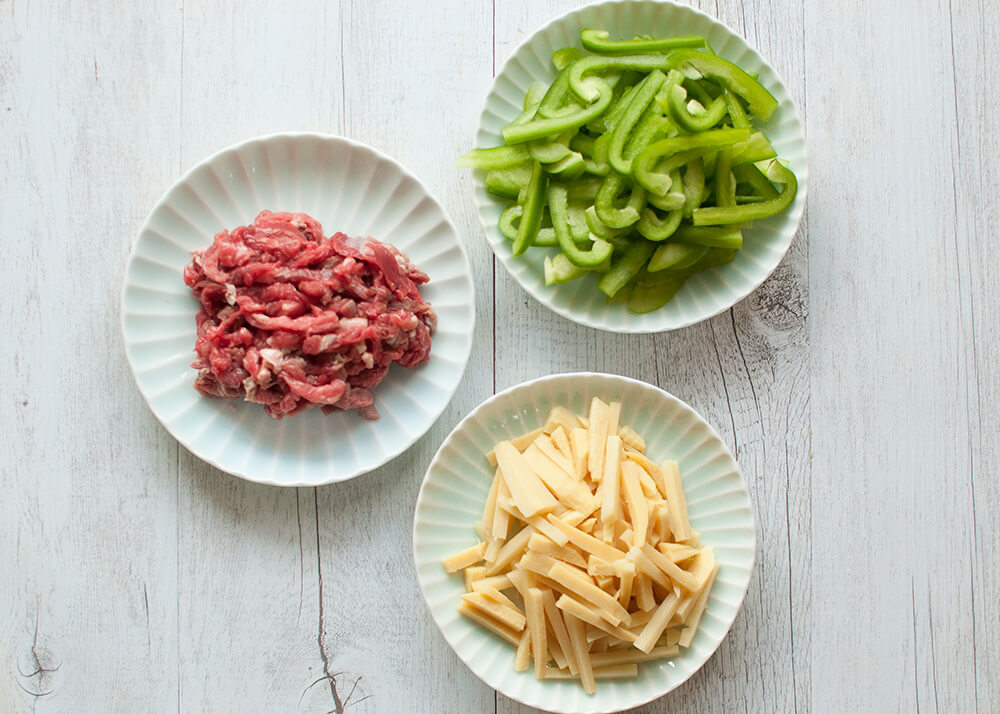 I cooked chinjao rosu when my kids were much younger, but I don’t think I told them the name of the dish. Probably because I thought the word “chinjao rosu” was not easy to remember – (1) it’s not a typical Japanese sound, and (2) they have trouble even pronouncing some Japanese words, let alone the Japanese version of Chinese words.

So, they wouldn’t be able to imagine what the dish looked like if I just gave them the proper name. They would say “what is it?”. Then I would have to tell them “the stir fry dish with beef, capsicum and bamboo shoots strips”. Then the kids would say “Oh, I like it. Yummy”. 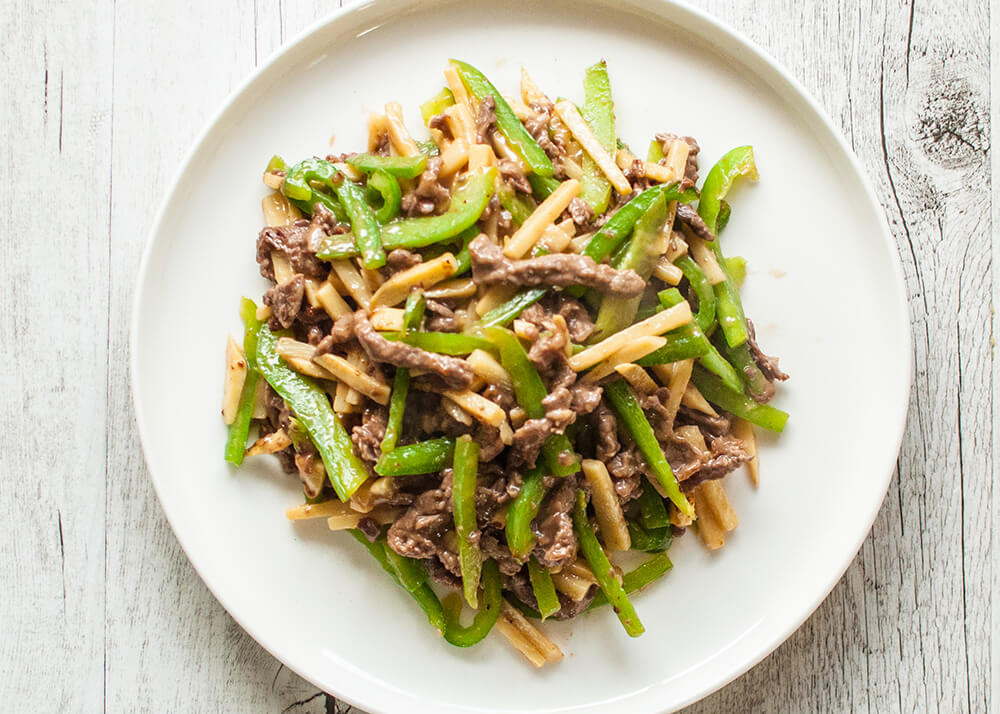 It is a rather long dialogue to just let them know what I am cooking but there are a few dishes like that. Particularly when the name is hard to pronounce or a bit long, they don’t try to remember the Japanese name. Hopefully with this blog, they will remember the name “chinjao rosu” instead of “beef, capsicum and bamboo shoots stir fry”.

The key to the success of this dish is to cut all the ingredients into similar sizes. In my recipe, I cut the meat and vegetables into about 5cm (2″) long strips but they can be a bit shorter or longer as long as they are the similar size.

The meat is marinated in sake, soy sauce and corn flour before stir frying. Sake will make the beef tenderer and corn flour will help the marinade flavour to be retained when the meat is cooked. 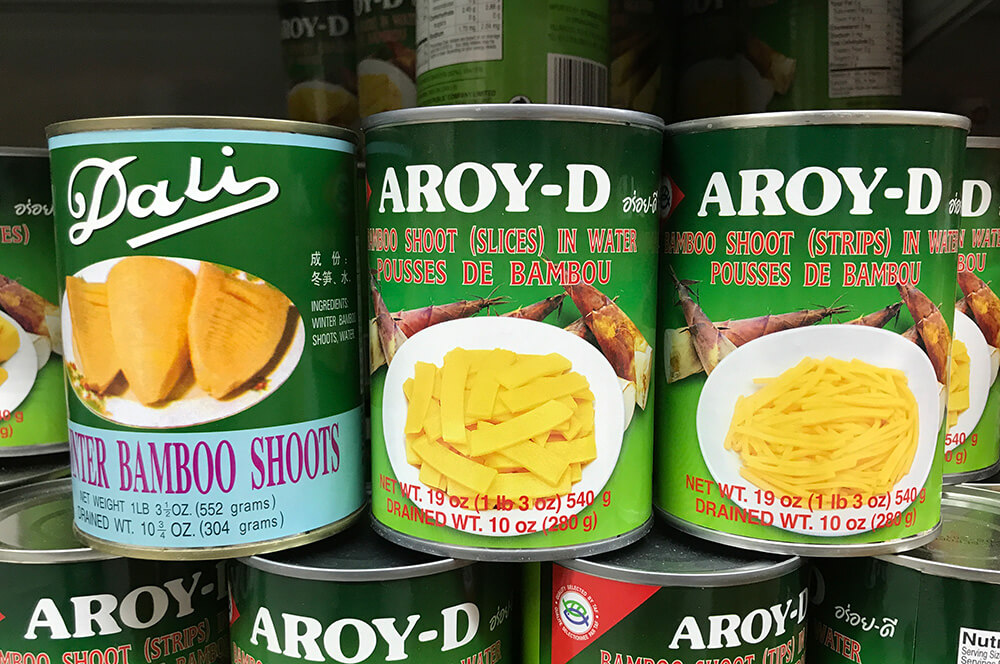 But for Chinese-style dishes such as this bamboo shoots recipe, I use canned boiled bamboo shoots from Asian grocery stores or supermarkets, because they are more stringy and crunchy, unlike those imported from Japan. They are fantastic to stock up for quick stir fry like this Japanese stir fry.

This will be a perfect week day meal for busy people. Once you cut the ingredients and prepare the sauce, it will take a mere 5 minutes to cook. It is so fast and so tasty, best served with rice. 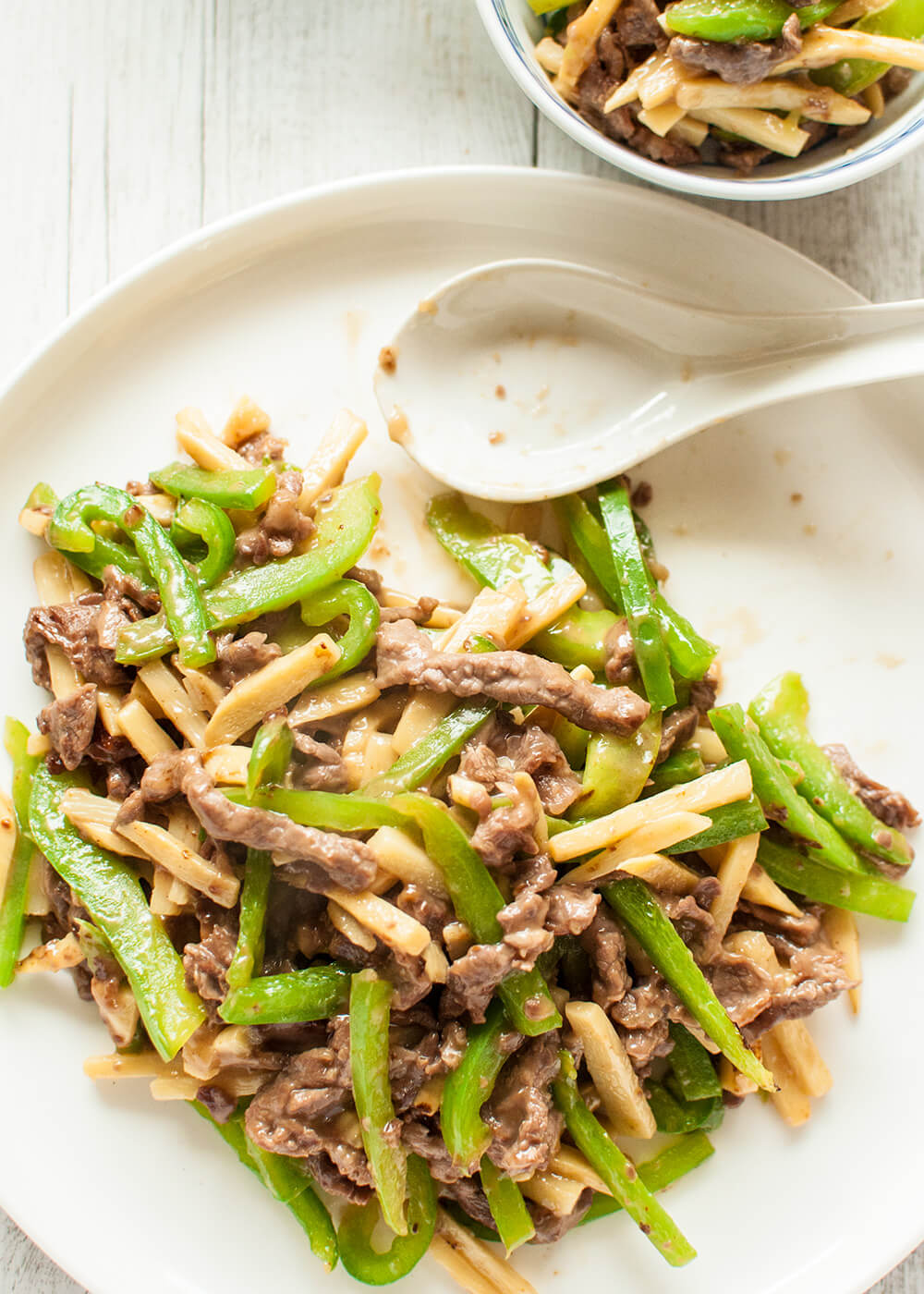 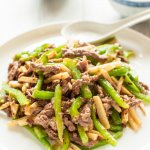 This is a quick Japanese stir fry dish that originated in China. Beef, green peppers (capsicum) and bamboo shoots are cut into thin strips and cooked in soy flavoured sauce with a touch of oyster sauce.

2. You can buy canned boiled bamboo shoots at supermarkets and Asian grocery stores. They come in 3 ways - whole bamboo pieces, sliced and julienned. See the sample photo in the blog.

I could only find whole bamboo shoots in a can so I cut them into strips. If I had bamboo strips, I would have used them instead to save prep time.

3. Any tender beef would work fine with this. E.g. Rump, tenderloin, sirloin, fillet. Slice into 5mm (3/16") thick slices, then cut each slice thinly into strips.