Somen (or sōmen) is a very thin noodles served cold which makes it a perfect summer dish. Noodles are served in chilled water and the dipping sauce is also chilled. It is a very simple dish but wonderful to pop in between heavy meals to give your stomach a little bit of a rest. 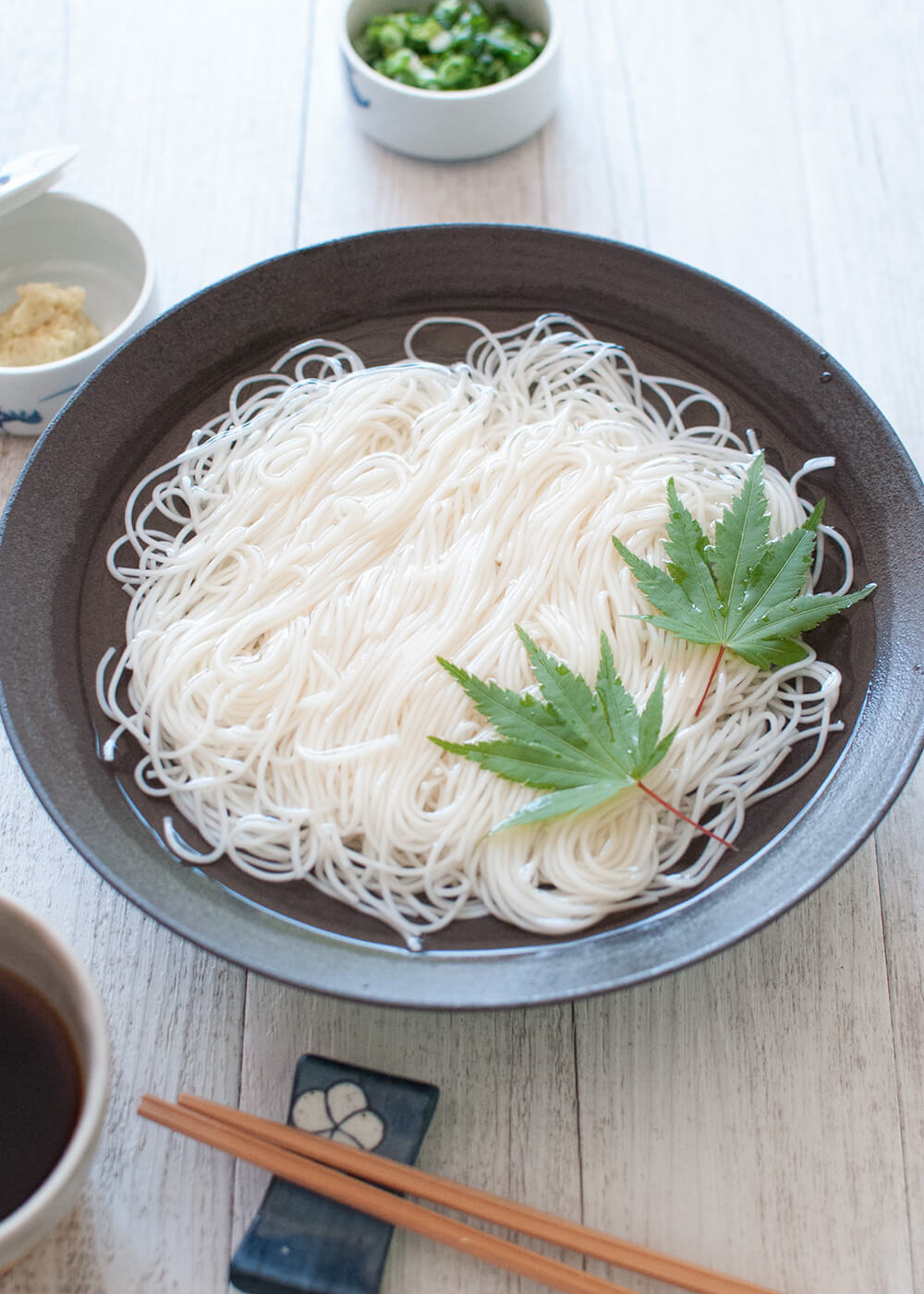 It is summer in Australia and we sometimes get extremely hot days where the temperature does not come down even in the evenings. On those days, I don’t feel like spending hours preparing for a meal. My appetite also becomes somewhat suppressed.

9 out of 10 times in such weather, I eat cold thin noodles with a small number of side dishes. It is a very simple meal but the plain cold noodles are so refreshing. Extremely thin strands of noodles also have cooling effects, I think, because they resemble streams of water.

The thin noodles I cooked today are called ‘sōmen’ (そうめん or 素麺). You might also have heard the name ‘hiyamugi’ (ひやむぎ or 冷麦), which are also thin noodles. They are both made in the same way and ingredients are the same – flour, salt and water. They are also sold as dried noodles, usually bunched into each serving and tied with a tape (see the photos below). 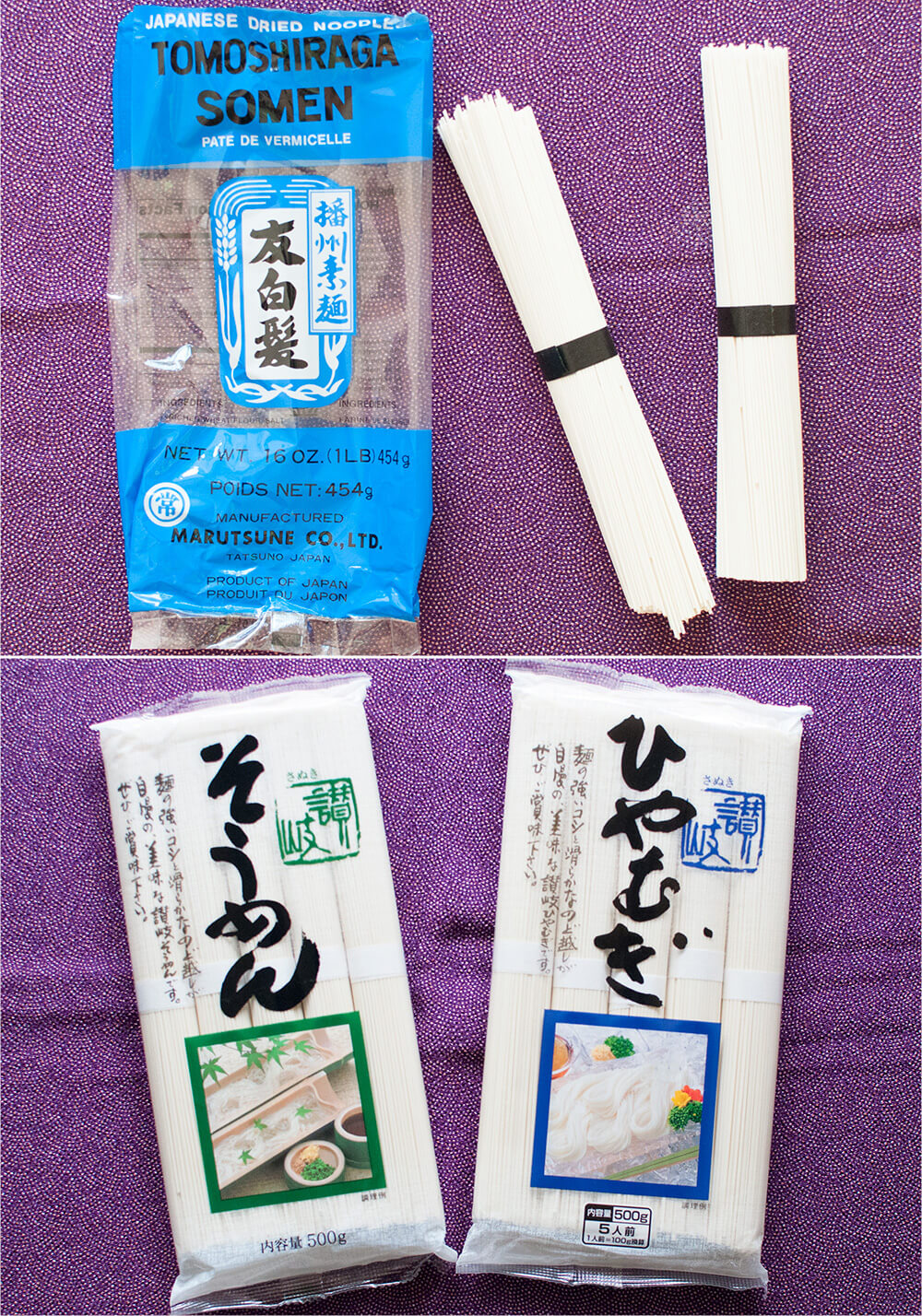 Top: Sōmen pack which you can buy at supermarkets. 5 bunches per pack. Bottom: Sōmen (left) and Hiyamugi (right) sold at Japanese grocery stores.

If you go back to the origin of sōmen and hiyamugi in 14th – 15th centuries, you’ll find that the method of making them by hand was different. But when noodle making machines were introduced during the industrial revolution in the Meiji period, both noodles became almost the same except the thickness of the noodles. 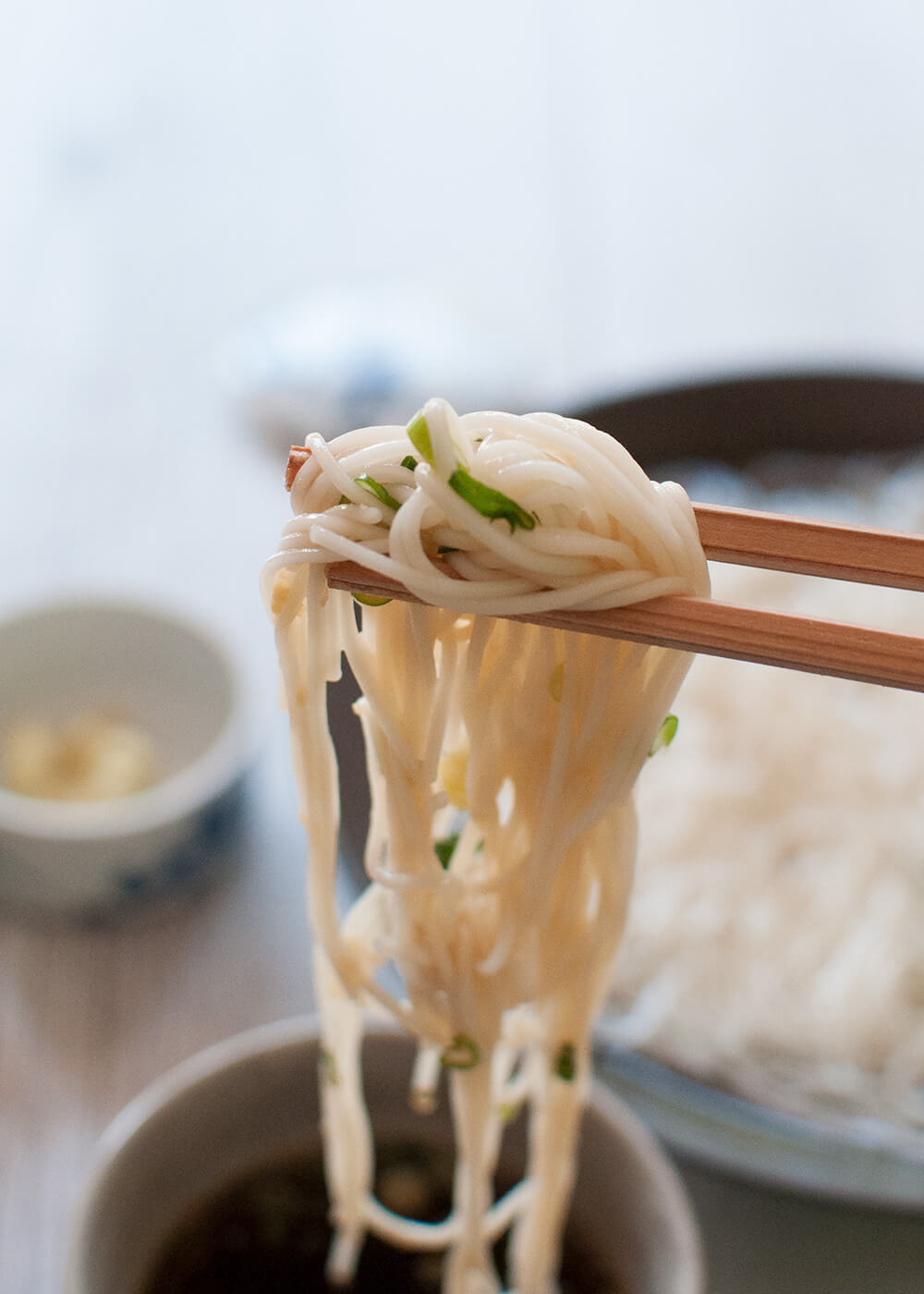 Sōmen is a bunch of white thin noodles but in the case of hiyamugi, you sometimes find the bunch with a couple of pink or green strands included in it. Apparently, colouring strands was introduced to purely distinguish hiyamugi from sōmen.

But these days, you can even find the entire sōmen noodles coloured in green, pink, orange etc with even flavouring!

In the case of zarusoba, I included chopped shallots (scallions) and wasabi paste as condiments that are to be mixed in the dipping sauce. But for sōmen dipping sauce, I use grated ginger instead of wasabi. Ginger goes very well with sōmen (or hiyamugi), probably because grated ginger is considered to be a summer flavouring. 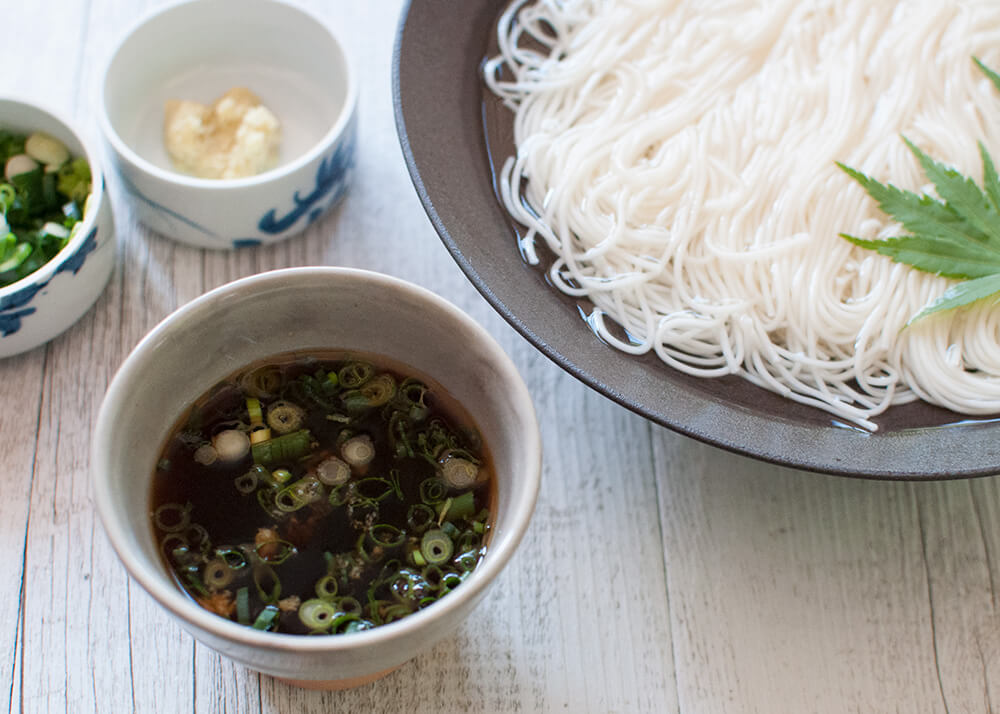 The most common way of serving sōmen is to place the noodles in a bowl filled with cold water. I sometimes add ice cubes to the water if the water is not cold enough.

Unless I am in a hurry, I even place the noodles to line up in the same direction so that they look like a stream of water. Drop a couple of Japanese maple tree leaves in to make it more like a real stream. 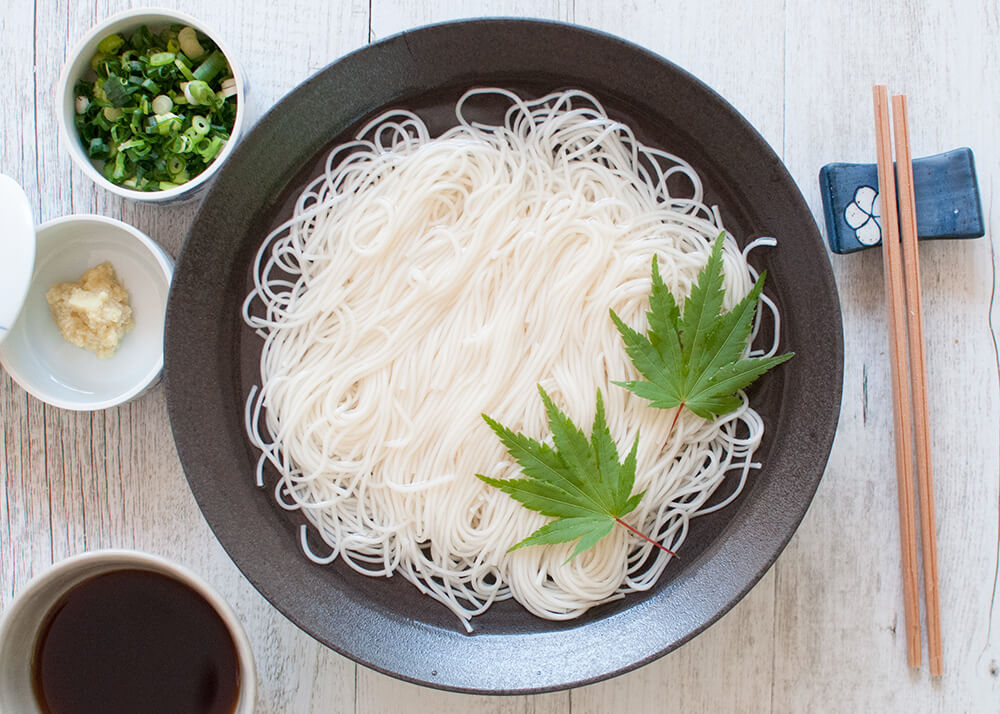 Instead of serving noodles in a bowl of water, you could place ice cubes on a deep plate and place groups of sōmen noodles on them. Using a bamboo basket to serve the noodles also creates a cool atmosphere. 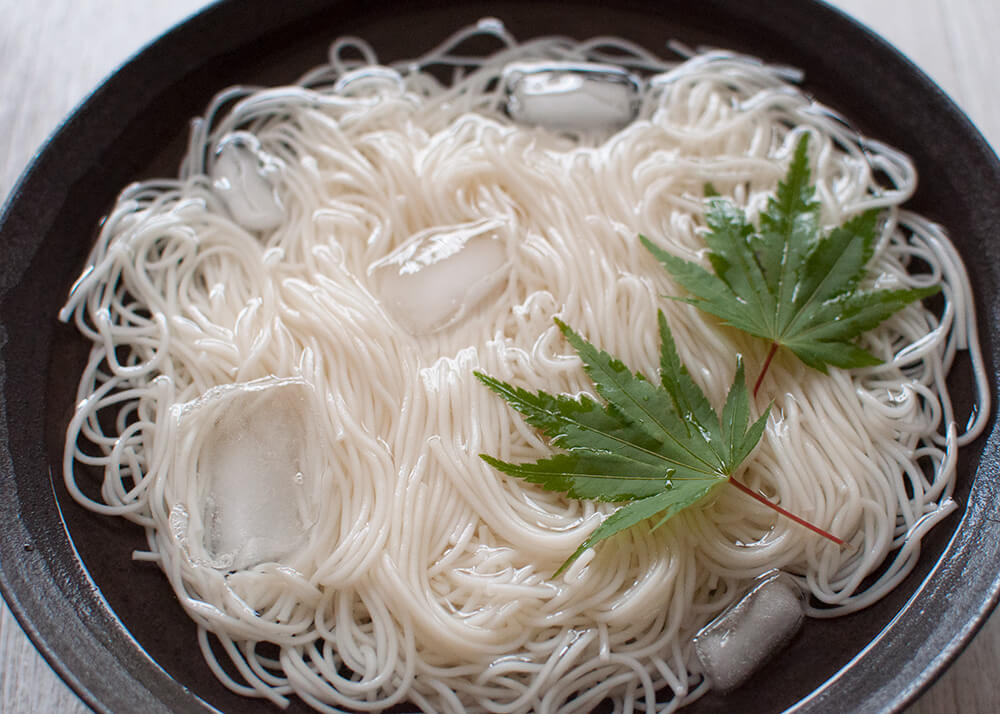 Today’s dish is perhaps not for people in northern hemisphere at the moment but I wouldn’t mind eating cold noodles even in winter! “Eating cold noodles in a warm room while outside is snowing” sounds luxury to me, just because we don’t get snow here in Sydney.

And remember, you need to make slurping noises to eat noodles! 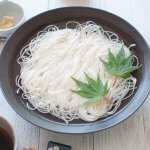 Somen (or sōmen) is a very thin noodles served cold which makes it a perfect summer dish. Noodles are served in chilled water and the dipping sauce is also chilled. It is a very simple dish but wonderful to pop in between heavy meals to give your stomach a little bit of a rest.

If you use dashi stock made from konbu (kelp), the dish will become a vegetarian dish.

1. You can buy sōmen at supermarkets as well as Japanese/Asian grocery stores.

Instead of sōmen, you can use hiyamugi if you like. Boiling time will be slightly longer if you use hiyamugi.

2. If you are a vegetarian, please use konbu-dashi - refer to Varieties of Dashi Stock.

4. Serving in cold water is one option to present the coolness of the dish. You can simply serve the noodles on a plate without water but it is probably a good idea to scatter several ice cubes. Otherwise, the noodles might stick each other after a while and you may find it difficult to take just a mouthful size of noodles.