Deep-fried Octopus is an octopus version of Karaage. Marinated octopus pieces are coated in corn flour/cornstarch, then deep-fried for no more than a minute. Octopus Karaage is an Izakaya dishes and goes perfectly with drinks. But it is also a great side dish or even a main dish. 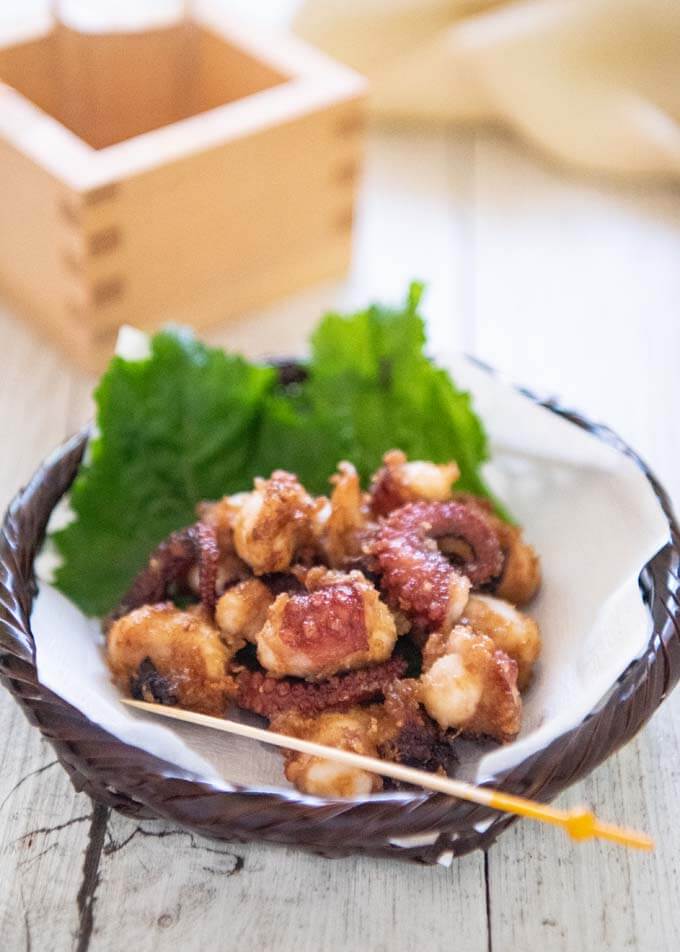 I used uncooked octopus as it penetrates the marinade better than boiled octopus. I also like the slightly chewy but tender texture of the octopus that you cannot get from the boiled octopus.

There aren’t many ingredients required to make Octopus Karrage. Unlike Chicken Karaage, I added garlic to the Marinade, which makes the dish more Izakaya-style. 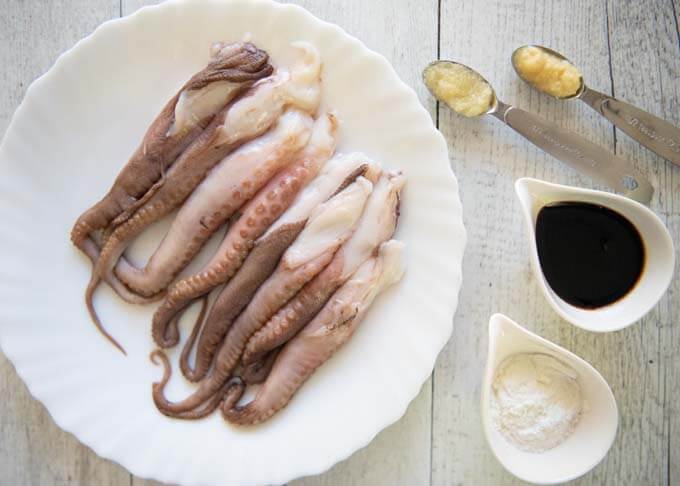 As mentioned in the section About Karaage in my post, Karaage Chicken (Japanese Fried Chicken), the coating can be either corn flour or wheat flour. Compared to wheat flour, corn flour makes the surface of the ingredient slightly crunchier when deep-fried. So, I used corn flour today. But you can use wheat flour if you like.

If you wish, you can add cooking sake to the marinade, but then you need to marinate the octopus for a slightly longer period. This is because the flavour of the marinade is not as strong as just using soy sauce.

Making Octopus Karaage is a very simple process. The only thing to watch for is oil splatter. I added a note on how to prevent it and protect yourself from it, but it happens when deep-frying fresh octopus. 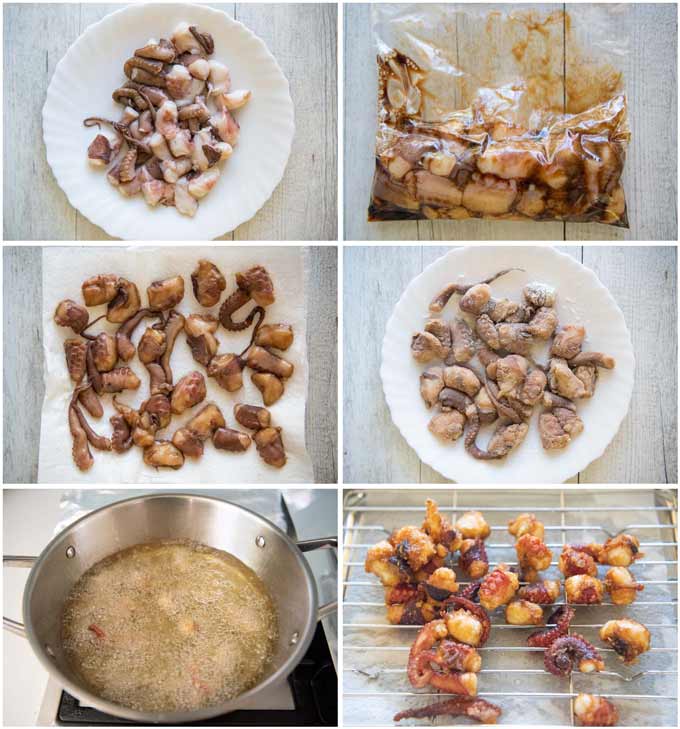 There are a couple of reasons the oil splatters when deep-frying octopus. One obvious reason is water around the octopus pieces. Pat-drying the octopus pieces well, particularly in the suction cups along the tentacles, and coating them thoroughly with corn flour reduces splatter.

The other reason is the air pocket between the flesh and the skin. This sometimes causes a big explosion. That’s why I added an optional step to remove the skin. The photo below shows the tentacles before (bottom) and after (top) the skin removal. 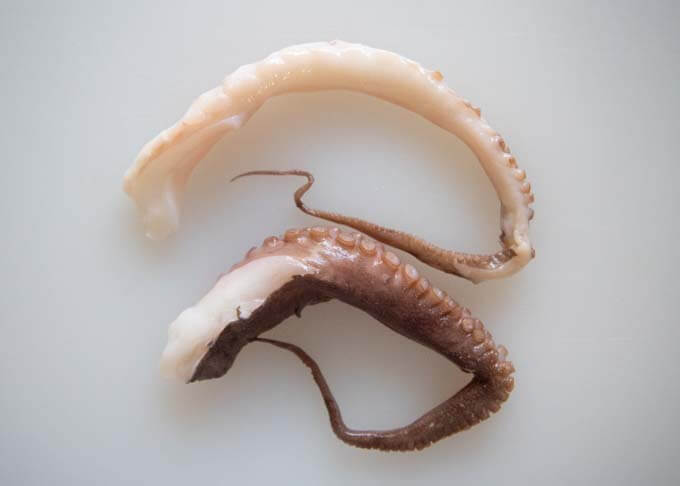 The downside of removing the skin is that you don’t get the rosewood colour of the cooked octopus skin, which makes the dish more appetising. 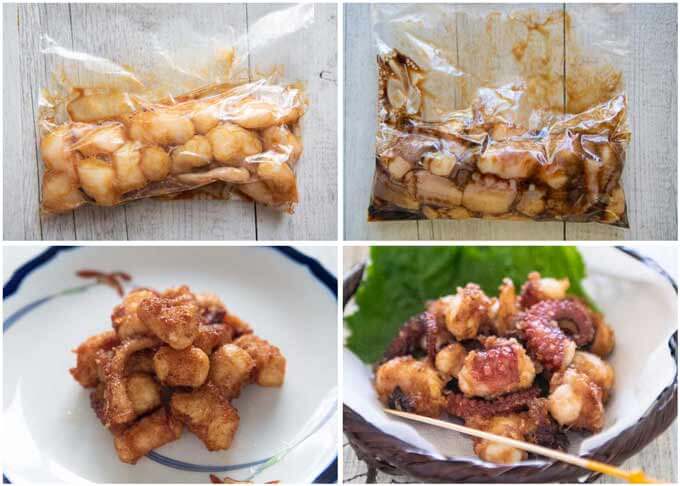 To be safe, I would also suggest that you hold a large lid of a pan in front of you as a shield when frying the octopus. This will prevent the oil from splattering onto you.

Many Deep-fried Octopus recipes on the internet use boiled octopus instead of fresh octopus. In Japan, boiled octopus is readily available at supermarkets and fish shops. This is because octopus tentacles are thinly sliced and served as sushi toppings or as sashimi (although they are not raw).

This is probably one of the reasons why many Japanese recipes use boiled octopus. It is easier to prepare and quicker to deep-fry. Boiled octopus also reduces oil splatter significantly. 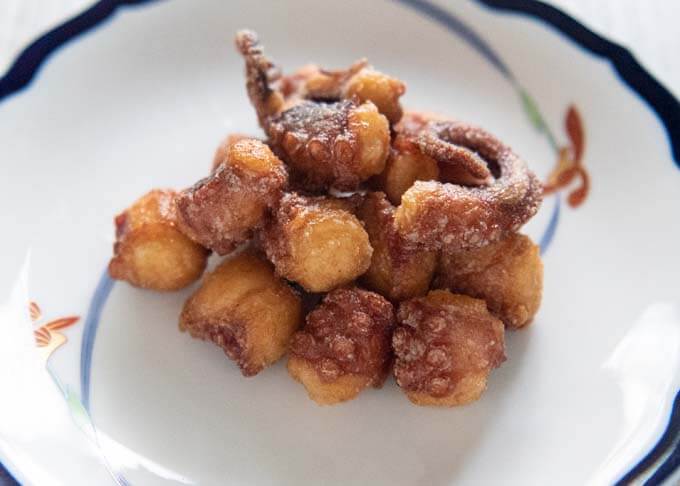 Octopus Karaage made from boiled octopus.

Uncooked octopus needs more preparation, and you might get a terrible oil splatter. You also need to avoid overcooking as overcooked octopus is very chewy.

But in my view, Deep-fried Octopus made from raw octopus has a better flavour. I also like the slightly chewy but tender texture.

Where I live, octopus is sold uncooked. So, I’d rather deep-fry raw octopus than boiling it then deep-frying. But if you are not used to deep-frying and concerned about oil splatter, you may boil the octopus at first, then marinate the pieces.

You can freeze octopus without or with marinade, which makes this dish even quicker to make.

Octopus Karaage is so tasty. Even if you need to handle a weird-looking creature and you might get oil splatter, I think that it is worth trying. 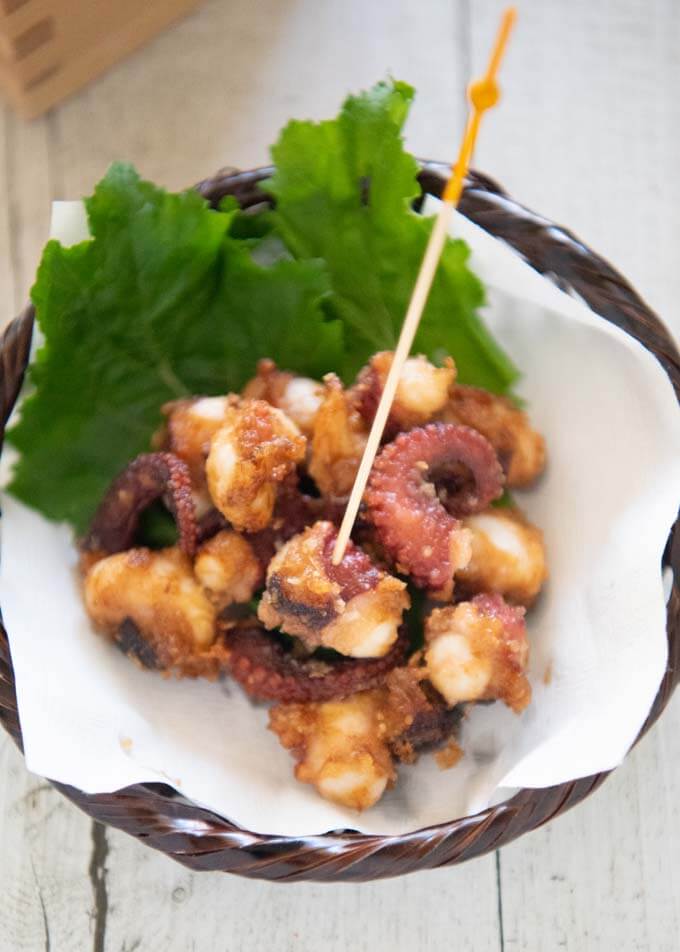 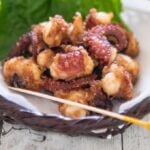 Deep-fried Octopus is an octopus version of Karaage. Marinated octopus pieces are coated in corn flour/cornstarch, then deep-fried for no more than a minute. Octopus Karaage is an Izakaya dishes and perfect to goes perfectly with drinks. But it is also a great side dish.

1. I used uncooked octopus but you can use boiled octopus too.

To reduce oil splatter, you may want to peel the skin off the octopus tentacles, particularly the thick part of the tentacles. You can also cut off the suction cups. Peeled octopus pieces lack colour when deep-fried but the flavour and the texture are not much different from those with skin on.

3. I would strongly recommend that you use a small pan/pot to deep-fry the octopus in batches so that the oil splatter becomes manageable.

4. Use a large saucepan lid as a shield to protect your body against oil splatter. I hold the lid in front of my body, at an angle so that the lid is diagonally placed above the oil, while giving you room to turn the octopus pieces over.

5. I served with green salad leaves to add a bright colour to the dish. You can also add a lemon wedge to sprinkle a small amount of lemon juice over the octopus pieces.

6. Nutrition per serving as a main dish. It is assumed that the oil absorption rate of octopus is 6% and 1/2 of the marinade is absorbed into the octopus.

I am serving Octopus Karaage as a side in today’s Meal Ideas. Since it’s an oily dish, I decided to serve a light main dish, Sashimi. You can also adjust the serving size easily so that you can control the amount of protein.

As always, you must have some salad to cleanse your palate when serving a deep-fried dish. 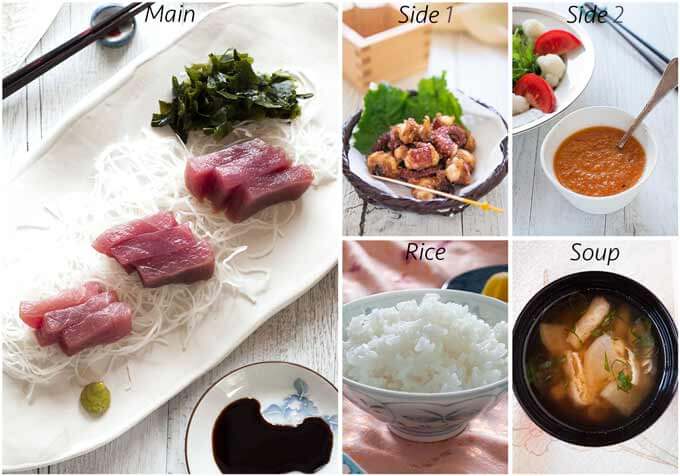