Karaage Chicken is one of the most popular Japanese dishes not only within Japan but abroad as well. The chicken is marinated with soy sauce, sake, ginger, and mirin to give a touch of sweetness.

I originally posted this recipe in September 2016 and updated in 2018 with a recipe video. Now I’ve improved the video as well as the contents. 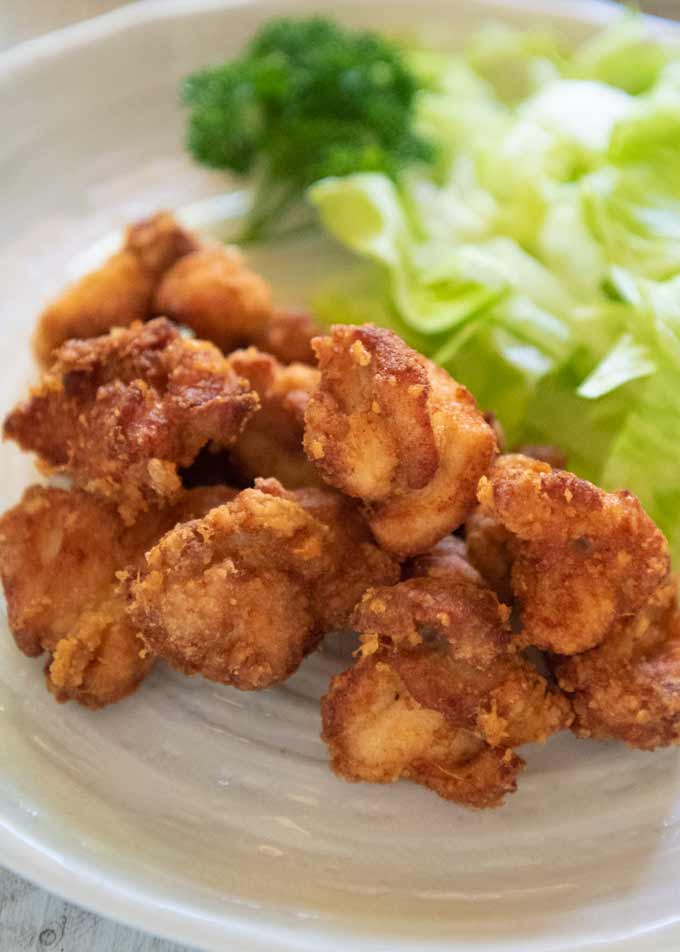 This is a little-known secret outside of Japan, but the chicken pieces are deep fried twice to make them crunchy on the outside and juicy inside!

Karaage Chicken is my children’s long standing no. 1 favourite dish within my repertoire. Whenever I declare that I will cook a Japanese meal for them, Karaage Chicken comes up first.

Some people might be thinking that karaage is Japanese-style fried chicken. But this is not correct. The word ‘karaage‘ (唐揚げ) is a generic term for deep fried food coated with or without flour. You don’t have to use chicken.

So Karaage chicken is ‘tori no karaage‘ (鶏の唐揚げ, fried chicken) in Japanese, qualifying that it is chicken (tori, 鶏). 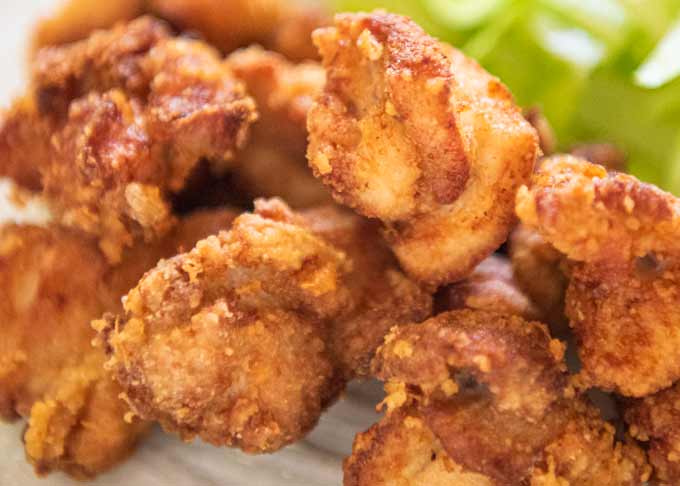 Karaage originally meant deep fried meat or fish without any marinating. The cooking method of pre-marinating ingredients came from China in the early Edo period. At the time, Japanese people called China ‘tou’ (唐), but this kanji character can also read ‘kara‘, particularly when combined with other characters. Hence the word 唐揚げ became ‘karaage’  instead of ‘touage‘.

If you marinate the meat/fish with some flavourings such as soy sauce before coating with cornflour, the dish becomes ‘tatsuta age’ (竜田揚げ). You can see the tatsuta age recipe using mackerel here. 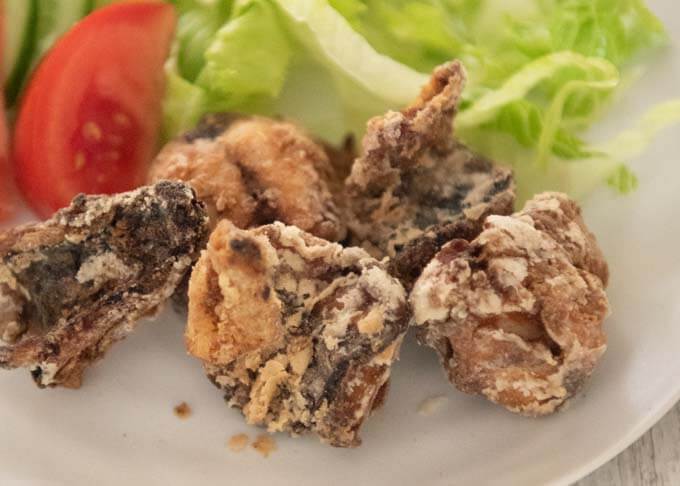 As explained in the post Mackerel Tatsuta Age, only if the fish/meat is flavoured and coated with corn flour before deep-frying, it is called Tatsuta Age.

On the other hand, the definition of Karaage is rather vague. You can deep fry fish/meat with or without flavouring, and you don’t have to coat the ingredient with flour. The flour can be any kind of flour.

There aren’t many ingredients involved in making Karaage Chicken. The marinade is made up of typical Japanese pantry items. 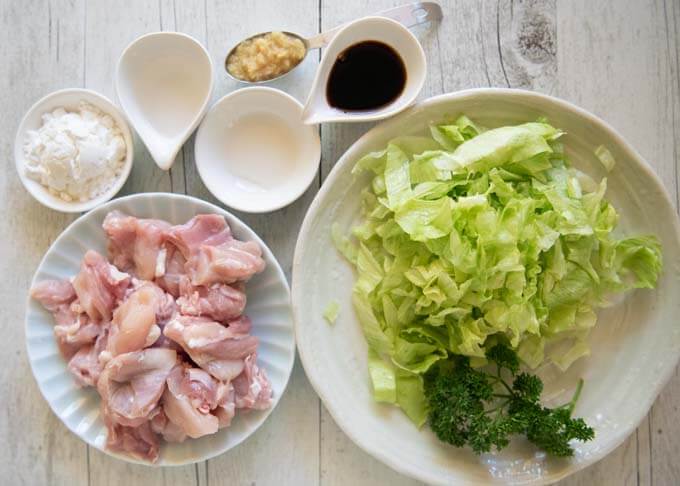 I sometimes use thigh fillets with skin on, but sometimes I use skinless fillets (as seen in the video). Instead of thigh fillets, you can use breast fillets, but the cooked chicken will be a little bit dry.

I used corn flour/cornstarch to coat the chicken pieces this time, but I often use plain flour instead. You could also use equal parts corn flour and plain flour. I find that corn flour makes the coating lighter when deep fried.

There are so many variations to the marinade. Some recipes don’t add mirin. The younger generations appear to like the marinade with garlic added, making the flavour closer to the Chinese version. I like it without garlic to keep the authentic Japanese flavour. And that’s the Karaage Chicken flavour that I remember.

My karaage chicken is marinated before frying. 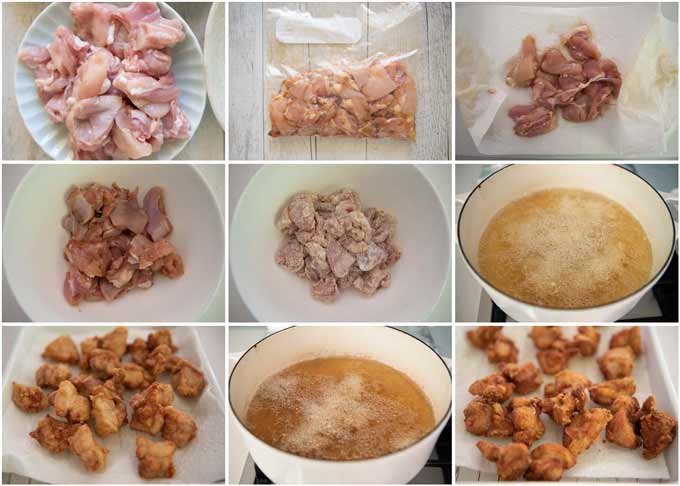 If you have a kitchen thermometer, that will be great. If you don’t, dip a pair of bamboo chopsticks in the oil and check the approximate temperature. If tiny bubbles are quietly forming around the chopsticks, then it is about 160-165°C/320-329°F, if larger bubbles are quickly rising, it is 180-190°C/356-374°F. You might find it difficult to see the difference in the comparison photo below, but hopefully you can see larger bubbles are coming up in the right photo. 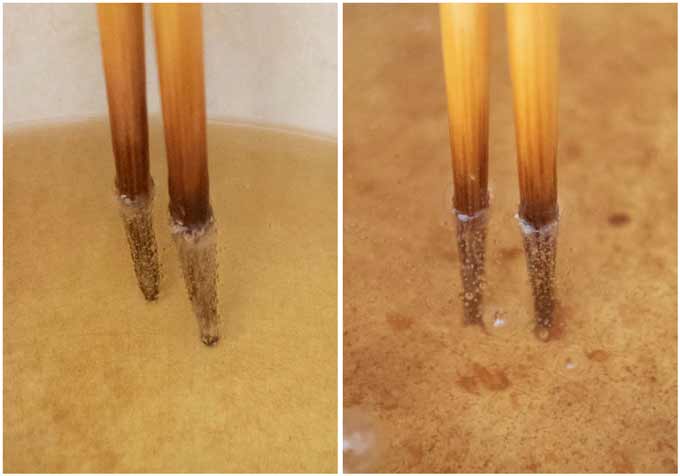 The secret to great Karaage Chicken with crunchy outside and juicy inside is the double-frying.

Frying twice as above ensures that the outside of the Karaage Chicken is crunchy and golden brown while the inside is juicy. 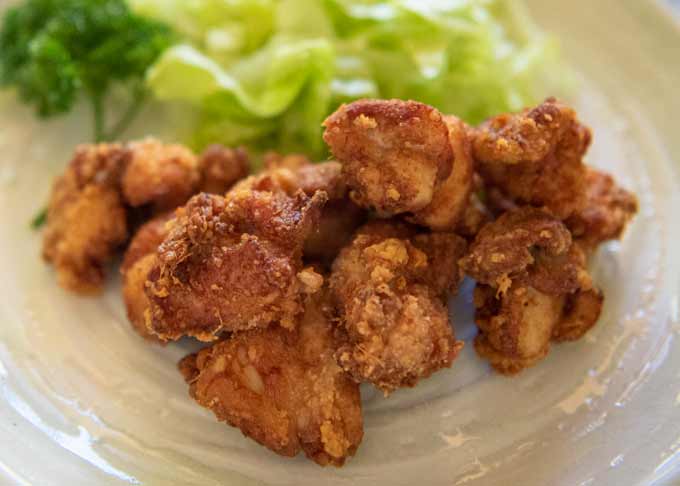 Yes, you need to do deep-frying (some people don’t seem to like it), but it is worth the effort.

WATCH HOW TO MAKE IT 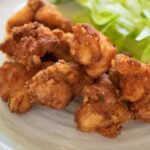 Recipe Video Above. One of the most popular Japanese dishes, not only within Japan but abroad, Karaage Chicken is pretty easy to make as long as you don't mind deep frying. Just marinate the chicken, toss in flour, and deep fry. Simple as that. The key is double frying so that the chicken becomes crunchy outside and juicy inside.

1. I cut the chicken thigh into about 5 x 4cm/2 x 1.6". You can make it smaller or slightly larger. Then cooking time would need to be adjusted.

2. Sugar can be substituted for mirin. The sweetness of sugar vs mirin is 2:1 so use 1/4 teaspoon of sugar. Make sure you mix the marinade well to dissolve.

3. I don't normally use a thermometer to check the temperature of the oil. I dip a pair of bamboo chopsticks in the oil and check the approximate temperature. If tiny bubbles are quietly forming around the chopsticks, then it is about 160-165°C/320-329°F, if larger bubbles are quickly rising, it is 180-190°C/356-374°F.

4. To maintain the temperature of the oil, do not overcrowd the oil with too many chicken pieces. I used a 20cm/8" pot and deep fried in 2 batches with no more than 5-6 chicken pieces at once.

5. While resting, the chicken continues to cook slowly resulting in tender juicy chicken.

7. Nutrition information assumes that the vegetable oil absorbed into the fried chicken is about 8% of the weight of the chicken. Garnish is not included.

You should try to match the oily main dish with some vegetables that can assist digestion. The daikon (white radish) in the salad is perfect for this. Hijiki Seaweed Salad adds a different flavour to the meal. 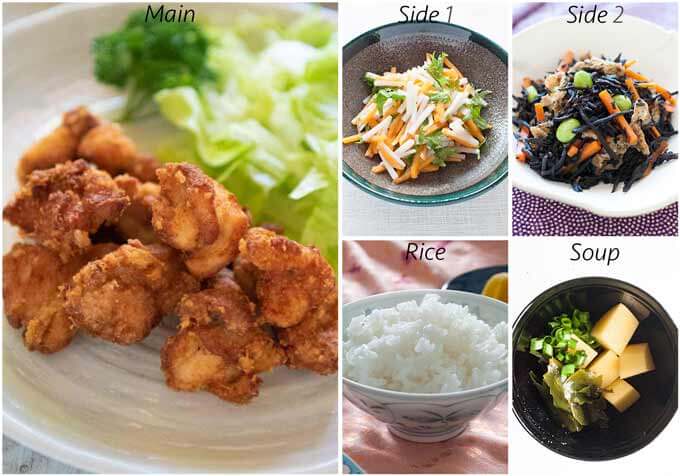