Sashimi is a simple dish – no cooking, just slicing. All you need is fresh fish, soy sauce and wasabi (Japanese horseradish). There are a couple of rules for slicing the fish fillet but once you get it, it’s so easy. 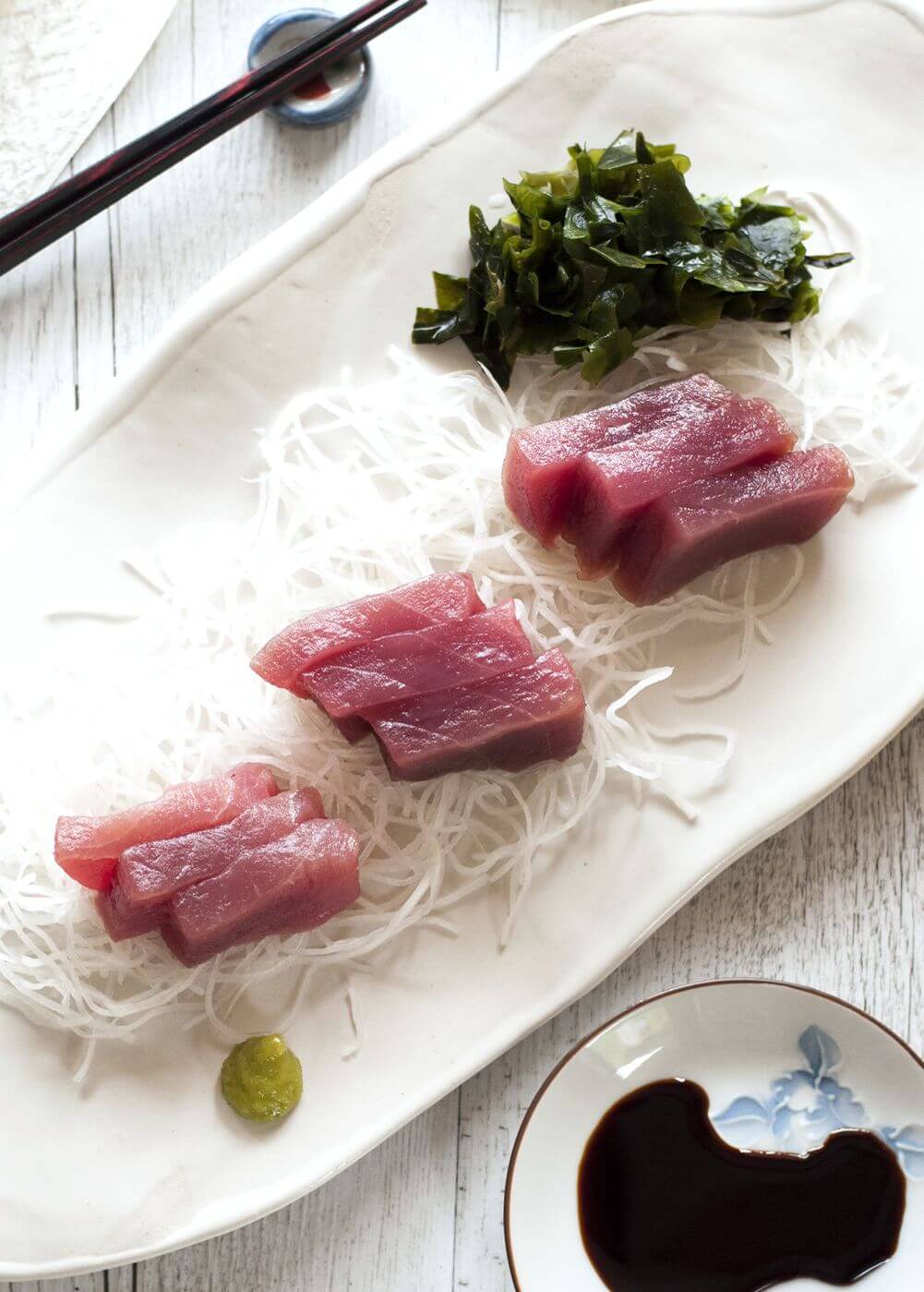 Japanese people say that almost all the fish you catch can be eaten raw as sashimi. As you probably know the Japanese even eat pufferfish (blowfish), although you need to have a licence to be able to dissect and make sashimi out of pufferfish commercially.

The best sashimi is the fish you just caught in the sea; filleted, sliced and served on the spot. When my kids were little, we used to go out fishing on weekends. We caught yellowtail, snapper, bream, etc. We sometimes caught quite few and it was my job to clean and make sashimi out of them for dinner.

I had never cleaned and made fillets out of a whole fish until then because in Japan the fish shop did all the work, regardless of the price and size of the fish. So, I had to teach myself from a book that showed all sorts of fish and how to clean/fillet them. As I got more practice, I got better at it. Thanks to regular fishing!

If you are in Japan, you will be delighted to see so many kinds of sashimi-quality fish sold not only at fish shops but even in supermarkets. But in Sydney, the variety is very limited.

The most commonly sold sashimi-quality fish where I live is tuna, salmon and kingfish. I might sometimes find deep sea bream or trevally. If I go to the Sydney Fish Market (which is claimed to be the largest fish market of its kind in the southern hemisphere and the 3rd largest seafood market in the world in terms of variety) I might find yellowtail and snapper suitable for sashimi.

I don’t know about your country and town but in Sydney, sashimi-quality fish can come in different forms. Some are cut into a long narrow block of fillet, ready to just slice. But at my local fish shop, they are not sold as a long block.

This makes sashimi slicing very awkward as a sashimi slice is usually about 3cm x 4cm rectangular and 7 – 10mm (¼” – ⅜”) thick and should be sliced across the grain.

If you can only buy this kind of tuna, then you will have to cut the meat into about a 3cm x 4cm (1¼” x 1½”) rectangular block (see the lines on photo below) then turn it 90 degrees so the grain runs horizontally to the cutting board. You may only get few slices out of each block, but in total you should have plenty of sashimi slices. 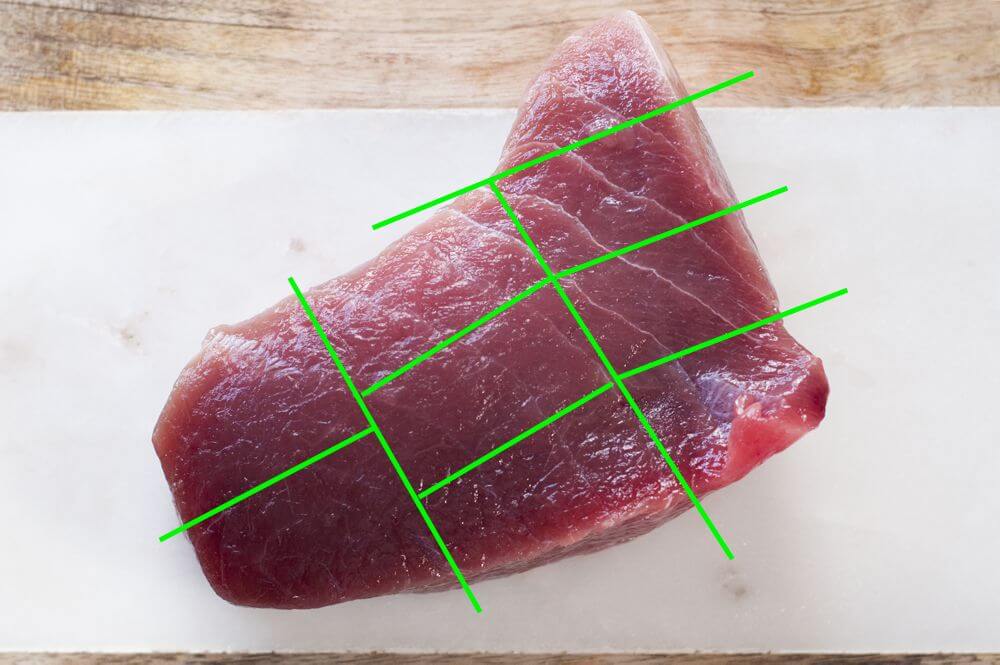 In the case of salmon, I can only buy it in the form of a standard fillet, i.e. a side of salmon cut 6 – 7cm (1½” – 2¾”)  wide, skin off. The length from dorsal to the belly end is too long to just slice this fillet to make sashimi. You would have to cut the fillet parallel to the backbone and make two or three narrow blocks. If the fillet has bones in it, remove the bones before cutting the fillet into blocks. You can then slice the block to make sashimi.

There are different ways of slicing or cutting for sashimi depending on the type of fish and the dish. But I usually use only two common slicing methods.

The hirazukuri (平作り, rectangular slice) is the standard cut for most of the sashimi you will see in the restaurants. Place a block of the fillet on the cutting board so that the grains run horizontally. If you are a right hander like me, start from the right side.

If you have a sashimi knife that’s great, but otherwise use a long, narrow knife. The right way of slicing the fillet is to draw the knife from its base to the tip in one go. Drawing the knife this way will ensure a clean cut. Tilt the knife to the right to remove the slice from the knife.

Thickness can vary and professional chefs might say that each sashimi piece is meant to be able to stay upright by itself. But I am not fussed about it and I usually slice the fillet into 7 – 10mm (¼” – ⅜”) thick pieces.

The other method of slicing I use is called sogigiri (そぎ切り, shaving cut). This method is suited for white meat fish which has firm, thin flesh such as snapper and flounder. When you slice the fillet very thin to 2mm (⅛”) thick or less, it becomes ususzukuri (薄造り, paper thin slice). Pufferfish sashimi is famous for usuzukuri and is arranged on a plate in a circle with minimum overlaps so that you can see the pattern on the plate.

Sogigiri starts from the left side for the right hander and the knife should be placed at an angle, say 45 degrees from the vertical position of the knife. If the fillet is very thin, you may tilt the knife more to make a wider slice.

Firstly, you have to remove the top left corner of the fillet to make the required angle of the cut. I would normally just put this end bit into my mouth to taste. Place the fingers on your left hand on the angled surface of the fillet and draw the knife to slice. Drawing the knife from the base to the tip with a smooth motion is more critical in sogigiri than hirazukuri to make a clean cut.

In the photo below, I used kingfish to demonstrate hirazukuri (top) and sogigiri (bottom). 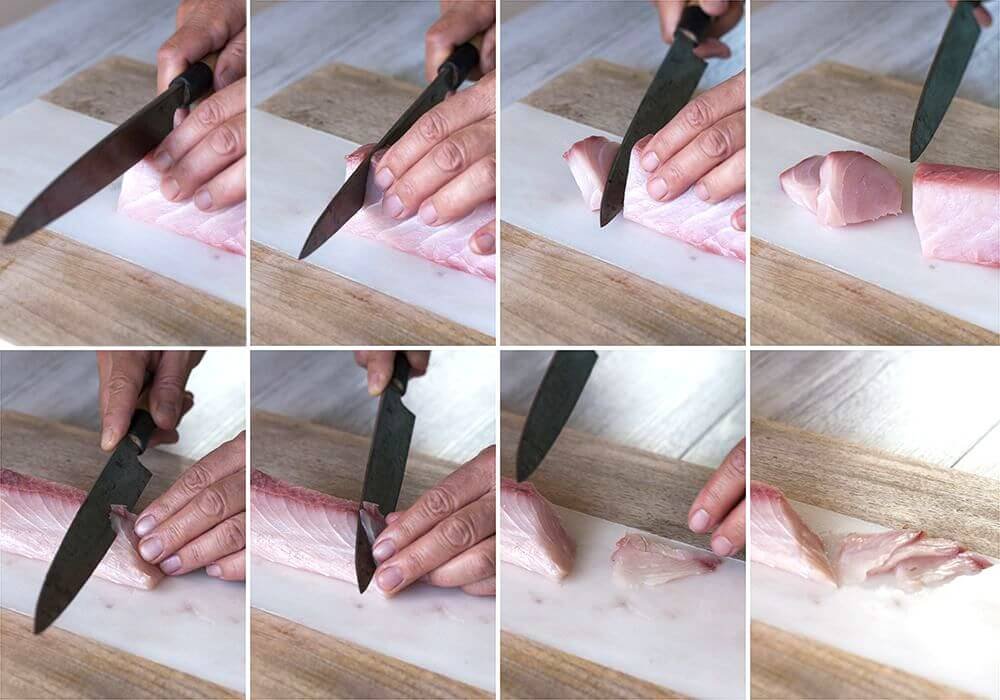 There are no rules to the way sashimi should be presented. But I find that grouping only few slices of sashimi together and placing several groups on the plate is the best way to present it. If you have different kinds of sashimi on a plate, each group should have the same kind of fish.

It is very common to use finely julienned daikon (white radish) as garnish. You could also add chopped seaweed to add colour as you can see in the first photo (note: the green dot in the photo is wasabi – Japanese horseradish). Daikon is placed underneath the sashimi in this photo, but traditionally a few small mountains of julienned daikon are placed on the plate and sashimi groups are placed between the daikon mountains.

When the sashimi is just a white meat fish, I use julienned carrots or cucumbers in addition to daikon to give some colour to the dish.