Chicken Wing Gyōza is basically a stuffed chicken wing that is deep-fried until the skin becomes crispy and golden brown. It’s not a gyōza with chicken wing meat inside.

It is crunchy on the outside and juicy on the inside. Chicken Wing Gyōza is very tasty without anything on it, but I find that eating it with mayonnaise adds a different dimension to the flavour.

As soon as you see the steaming hot Chicken Wing Gyōza on a plate, you know you will need to use your hand to pick it up and eat it. When you bite into the stuffed wing balloon, straight away you will want some more.

What is in my Chicken Wing Gyōza

The ingredients can be grouped into chicken wings, and gyōza filling. 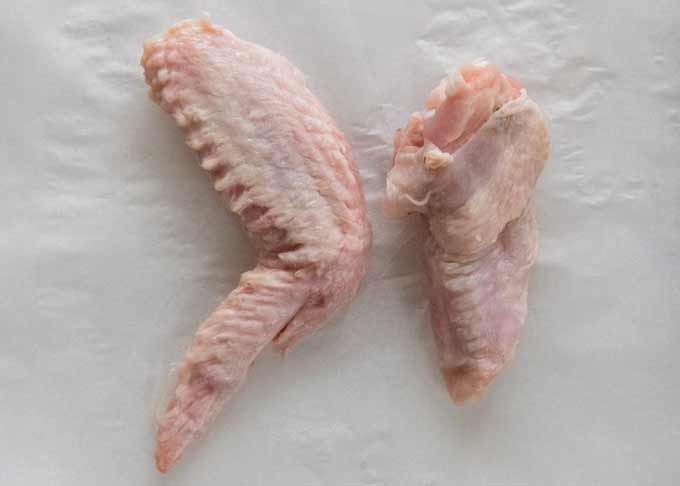 I don’t know about where you live, but in Sydney it is difficult to find whole chicken wings at supermarkets these days.

Most chicken wings are sold as V-wings or cocktail wings. The former is the wing with no tip (which I desperately need for today’s dish), and the latter is the collection of wingettes and drumettes (which are useless for me).

I wanted to buy free-range chicken wings with tips, and the only place I could find them near where I live was Harris Farm Market. Thank you HFM!

I used pork mince and cornflour to bind the ingredients together because I wanted to have chunks of prawns in the filling to give a different texture to the gyōza. This was what Sekka’s Chicken Wing Gyōza had inside.

Instead of using pork and prawn, you can make filling with just pork if you like. I have not tried it yet, but you can actually use the standard gyōza filling. Nagi’s recipe, Japanese Gyoza (Dumplings), shows how to make gyōza filling with pork mince. It should give you quite a different flavour to my Chicken Wing Gyoza.

How to Make Chicken Wing Gyōza

I must warn you – you will spend a bit of time deboning the chicken wings. It took me about 15 minutes to debone 8 chicken wings this time, but when I first tried it, I took a bit longer. Before the recipe card, I added a video that shows how to debone a wingette as well as how to fill and close the wingette bag.

There are a few steps in  making filling, even though it only takes up one line of the instructions (step 4).

Firstly, cut the prawns into cubes. Put aside some cubes, then flatten the rest of the cubed prawns using the side of a knife to make prawn paste.

Add salt to the pork mince and mix well until it develops stickiness. The salt in the pork helps the mince become stickier, which binds other filling ingredients well. Only after that, you mix all the ingredients.

If you are not keen on deep-frying, you can cook the stuffed chicken wings in the oven instead. I added a brief instructions for Oven-baked Chicken Wing Gyoza in the Note section of the recipe card.

Getting ready to bake Chicken Wing Gyōza in the oven.

It is worth the effort!

You can find different versions of stuffed chicken wings in other Asian cuisines such as Vietnamese and Thai. The fillings are made of quite different ingredients with the country’s typical flavouring. What is the same in all these dishes is that you need to remove the bones from the wingettes, which is a daunting task.

You may wonder if it is worth the effort of removing two tiny bones from all the wings, battling with toothpicks, and deep-frying twice, only to consume them in a minute or two. But I can tell you that it is so worth it because they are delicious, and your diners will be delighted.

Once you get the hang of it, it’s not so difficult to debone chicken wings. Below is the video for deboning and stuffing the chicken wings, and I also included a step-by-step photo in the recipe card. But I must admit I like it deep-fried.

WATCH HOW TO Debone and Stuff Chicken Wings

I hope you try Chicken Wing Gyōza. They are so good!

Chicken Wing Gyōza is basically a stuffed chicken wing that is deep-fried until the skin becomes crispy and golden brown. It is crunchy on the outside and juicy on the inside. It goes well with chilli mayonnaise.

Cook Time assumes the wings are deep-fried in two batches.

Here is the perfect recipe, Simmered Chicken Drumette in Sweet and Sour Sauce, to use up the leftover drumettes.

2. I mixed several dashes of tabasco into 2 tablespoons of Kewpie mayonnaise.

3. I find that it is easier to pop the joint when you bend the bone against the natural bending direction of the joint.

4. Removing the ulna can be more difficult, due to stronger ligaments that hold the joint. If the bone does not pop, use the scissors to cut the ligaments that are holding the bone (be careful not to make a hole in the skin!).

5. The cavity should be filled to 80% full, rather than to a maximum capacity. This is because the chicken shrinks when heated and the gyōza will explode if it is overstuffed.

6. You should have sufficient skin left at the opening for you to be able to put a toothpick through. If the filling reaches to the edge of the opening, you may need to remove some.

By putting a toothpick through from outside of the wing makes the closing end of the flesh bends to form a natural bulge on the right side of the Chicken Wing Gyōza.

8. Nutrition per piece. It is assumed that a half of the marinade is discarded and the oil absorption rate of Chicken Wing Gyōza is 5%.

Since you will probably need to use your hands to eat Chicken Wing Gyōza, I picked dishes that can be eaten without using chopsticks or knife & fork.

The side dishes can be picked up with your hands and Onigiri is also eaten with hands. Unfortunately, miso soup will need chopsticks to pick up the ingredients. But if you serve miso soup in a mug/cup, you might be able to eat it without chopsticks!