Today’s dish, Pickled Cucumbers and Shiitake Mushrooms, is not a traditional Japanese pickled cucumber recipe. It has a complex flavour of salty, sweet, sour, nutty, and spicy – a perfect izakaya (Japanese-style tavern) dish. 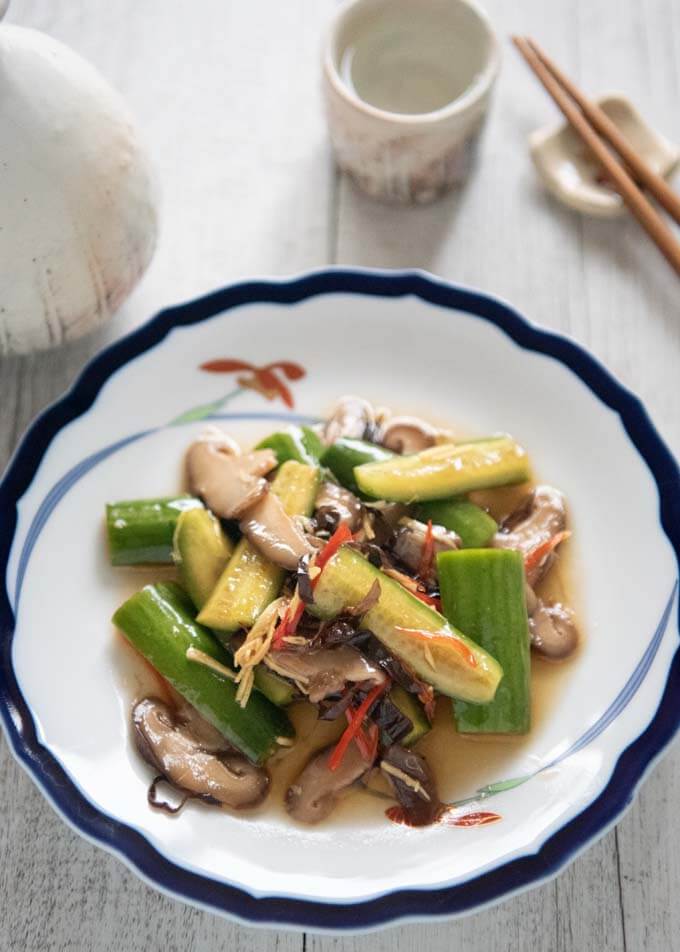 I recently had Pickled Cucumbers and Shiitake Mushrooms at a Japanese restaurant called Sekka Dining, in St Leonards. I had never had such pickles before, and it was very tasty. It went very well with warm sake.

The flavour was complex, but I could tell that the pickling liquid contained soy sauce, sesame oil, vinegar, sugar or mirin (i.e. sweetness) and umami. In addition to the cucumber sticks, sliced shiitake mushrooms, and wood ear fungus, it also had julienned ginger and red pepper.

The dish at the restaurant was so tasty that I decided to work on replicating it so that I could share the recipe with you. My version is not exactly the same as Sekka’s dish, but I think it is pretty close and equally tasty.

What’s in My Pickled Cucumbers and Shiitake Mushrooms

The ingredients are grouped into two components – the vegetables to be pickled and the pickling liquid.

Vegetables to be pickled 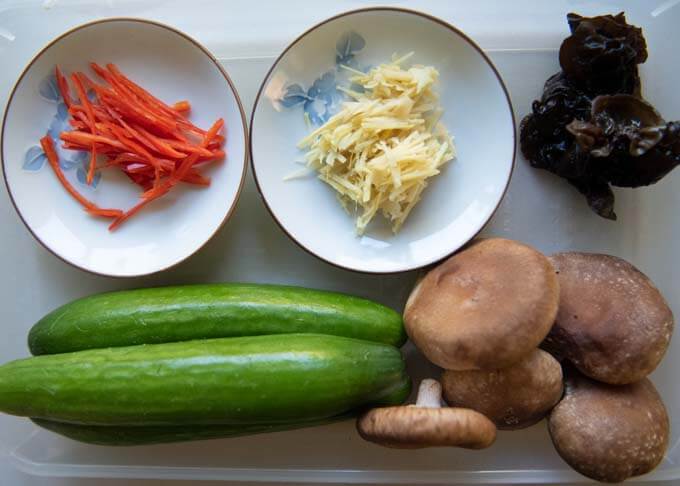 Wood ear fungus is included to add colour and a different texture to the dish. You can buy them at Asian grocery stores or even at some supermarkets. You can omit it if you don’t have it. The photo below shows the packet of dried wood ear fungus,  a few pieces of dried and rehydrated wood ear fungus. 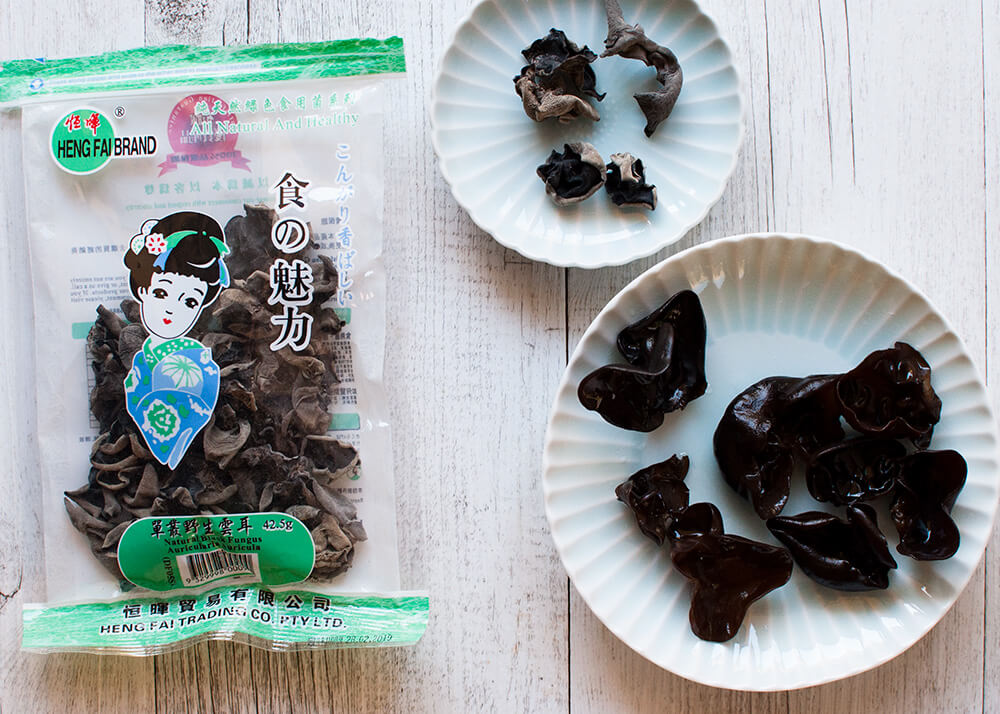 The amount of chilli I used in this recipe does not make the dish hot, but it does give you a hint of spiciness. You can adjust the quantity to suit to your palate. 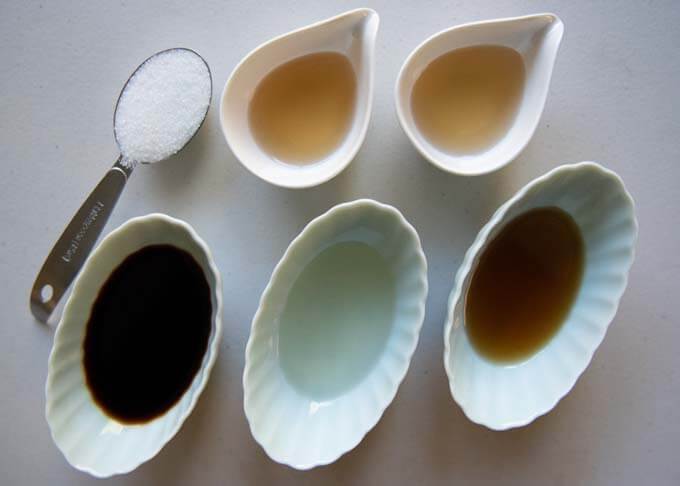 Shiro dashi is packed with umami, so it will add a great flavour to the pickling liquid even if you use a small amount of it. Shiro dashi is a very handy seasoning to have.

But if you don’t have shiro dashi, you can use granular dashi powder diluted in a small amount of warm water to boost umami to the pickles. Details of alternative ingredients for shiro dashi are in the note section of the recipe card.

If you use granular konbu dashi powder, you can make a vegan version of Pickled Cucumbers and Shiitake Mushrooms.

I used two different kinds of sesame oils so that the pickling liquid is not overpowered by the strong roasted sesame flavour that comes from the dark sesame oil. 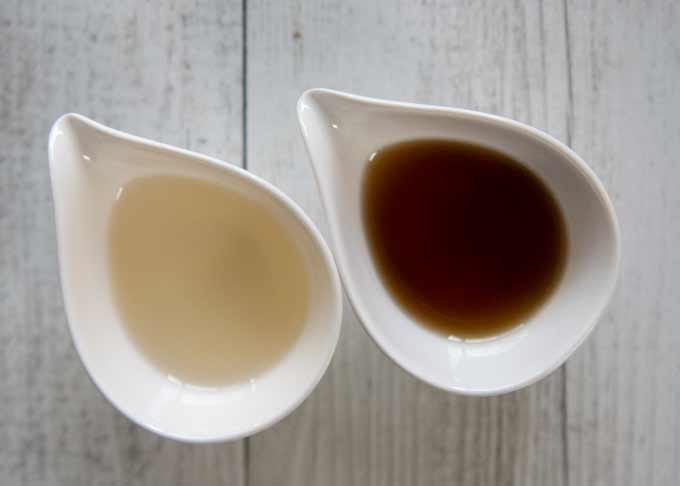 The colour is very dark brown. White sesame seeds are roasted, then pressed to obtain sesame oil. Because of the roasting, the colour of the oil is very dark and the nutty sesame flavour is very strong.

The flavour of the sesame oil made from black sesame seeds is even stronger than that of brown sesame oil. It is not readily available in Australia.

You may see ‘Black Sesame Oil’ on the label of the bottle of sesame oil, but it is usually made from roasted white sesame seeds. 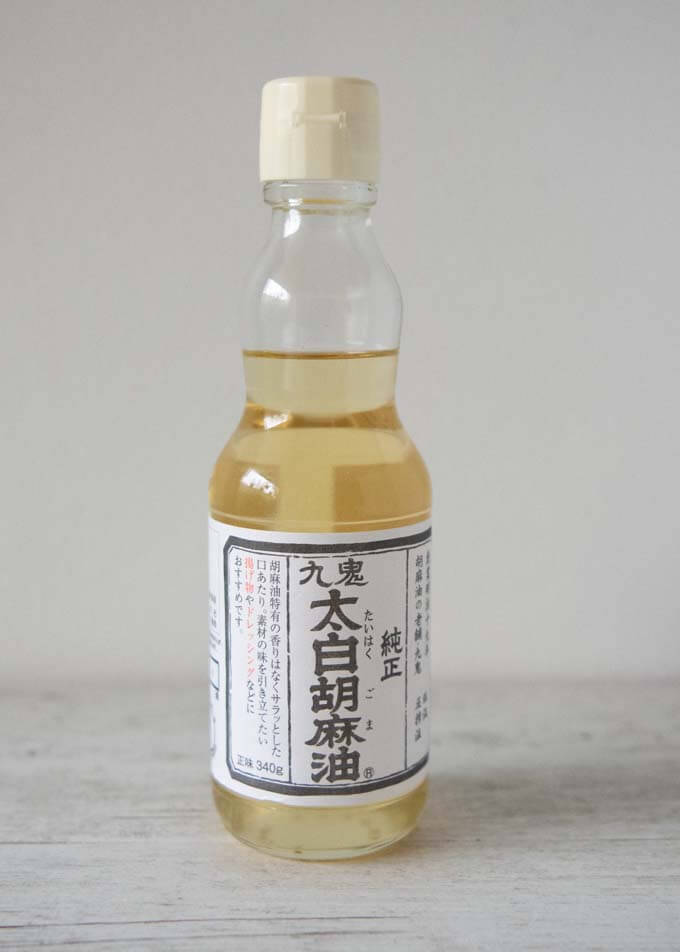 The colour of white sesame oil is yellowish clear, like the colour of rice vinegar. It is made without roasting the white sesame seeds. Accordingly, the nutty flavour of the sesame is almost non-existent.

I did not want to have a strong sesame flavour in the pickling liquid, but I needed a sufficient amount of oil. So, I used the same amount of white and dark sesame oil.

How to Make Pickled Cucumbers and Shiitake Mushrooms

Shiitake mushrooms need to be boiled before pickling.  Once it’s done, mix all the vegetables and pickle them. 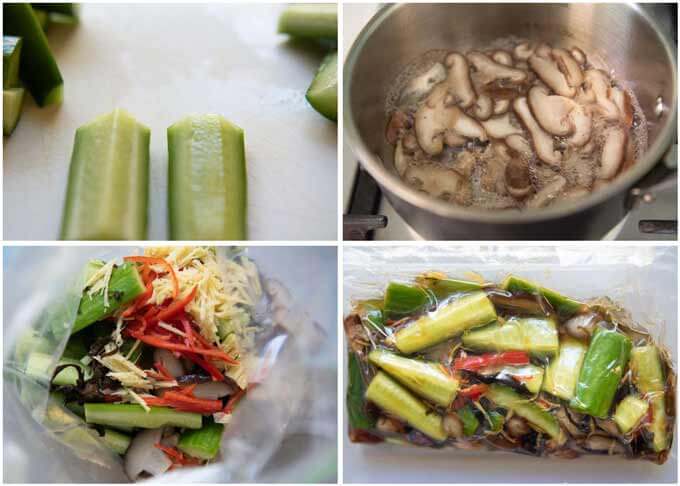 I removed the soft part of the cucumber pieces because they contain a lot of water, which makes the pickling liquid thin. 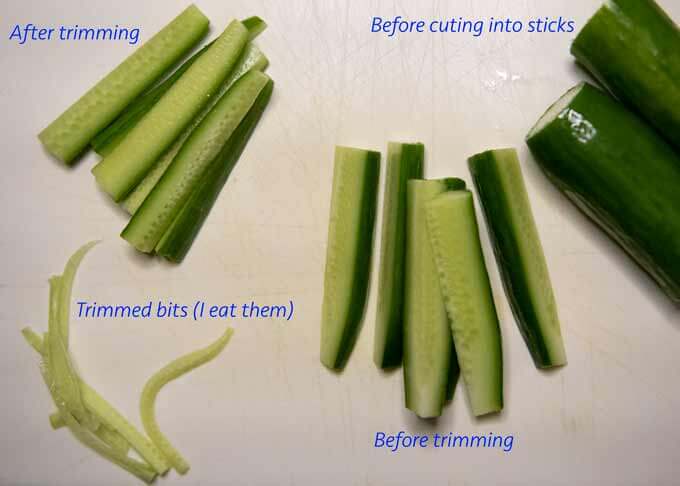 After boiling the mushrooms, I don’t drain the water because the liquid contains umami.

Pickled Cucumbers and Shiitake Mushrooms is a great side dish as well as nibbles to go with drinks.

It is also good as a starter before eating ramen, which is exactly what I had when I had to visit Sekka for the second time to taste their Pickled Cucumbers and Shiitake Mushrooms.

Pickled Cucumbers and Shiitake Mushrooms keeps about a week in the fridge. 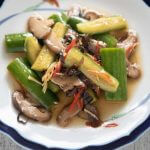 Pickled Cucumbers and Shiitake Mushrooms is not a traditional Japanese pickled cucumber recipe. It has a complex flavour of salty, sweet, sour, nutty, and spicy – a perfect izakaya (Japanese-style tavern) dish.

It is assumed that pickling time is 1 day.

2. I used several small pieces of dried wood ear fungus. I tried to weigh them before rehydrating but they were so light that my food scale could not give me the weight. 10g is the rehydrated weight.

3. I used shiro dashi to give umami to the pickles. If you don’t have shiro dashi, I recommend using a strong dashi stock combined with mirin and salt instead. In the place of 1 tbsp of shiro dashi, combine ¼ tsp granular dashi powder, 1 tsp warm water, 1 tsp mirin, and 1/8 tsp salt.

If you don’t have white sesame oil, substitute it with lightly flavoured clear oil.

5. Alternatively, place the saucepan, with the mushrooms inside, in cold water to let the pan cool down quickly.

6. The length of the stick can be slightly shorter or longer. If your cucumber is fat, you may want to cut each log into 6 wedges.

7. You can keep Pickled Cucumbers and Shiitake Mushrooms for about a week in the fridge.

8. Nutrition per serving. It is assumed that 1/3 of the pickling liquid is consumed.

I decided to make a set of dishes close to what I had at Sekka. There were three of us and we ordered quite a few dishes to share, finishing with mini ramen. Many of them are not on my blog but I pickled similar dishes to make up a meal.

It looks a lot, but you just need to control the quantity of each dish. 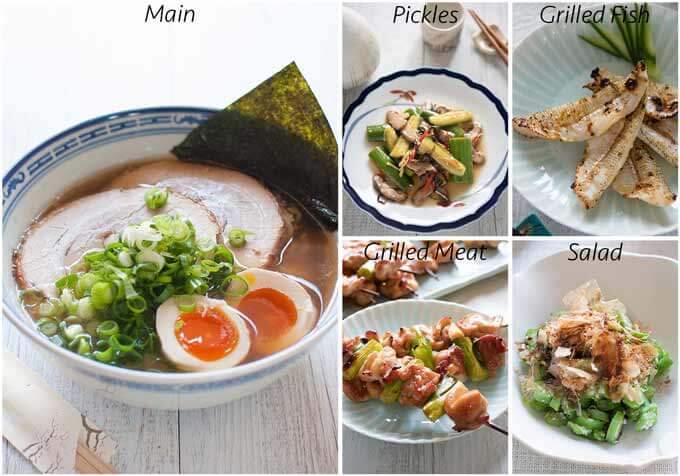