You can buy a bag of chips made from all sorts of vegetables at supermarkets these days, but I haven’t seen Burdock Chips. Today, I am sharing a recipe for Home-made Burdock Chips. It is quite easy to make and they are delicious. 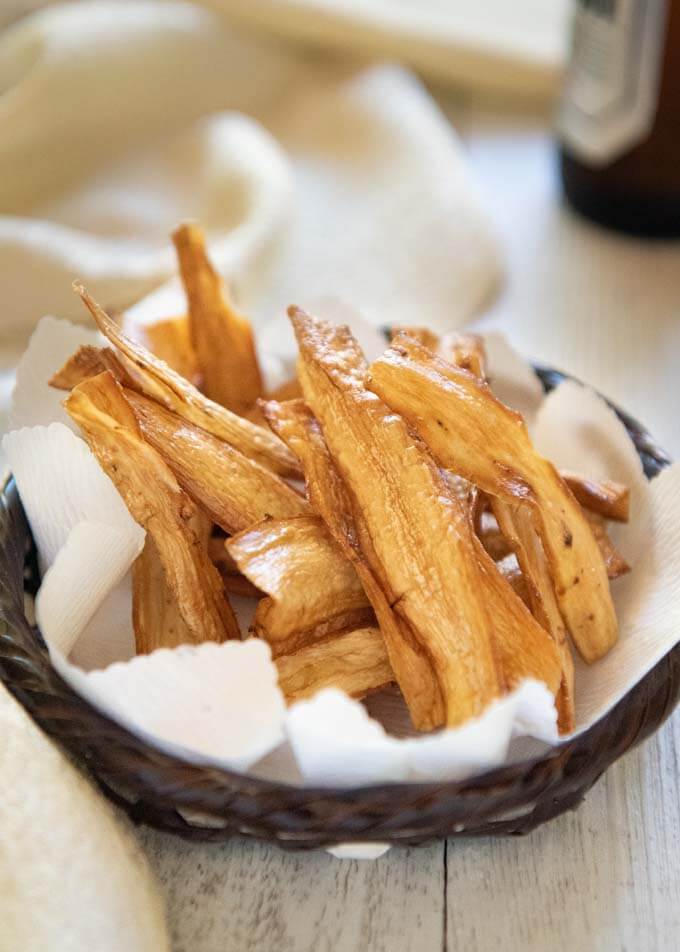 Many people may not be familiar with burdock. If you can find it, I would strongly recommend cooking a dish or two using burdock. It contains a lot of fibre and some sugar, which makes it perfect for making chips as well.

Burdock is called ‘gobō‘ (牛蒡) in Japanese. It is a long and skinny root vegetable. The root is about 3cm / 1¼” in diameter and can grow to 1m / 3’ 3⅜”. It grows straight down into the soil so you can imagine how hard it would be to dig the root out!

Burdock is also known as greater burdock or edible burdock. It is not a good-looking root vegetable. At one glance, you would even wonder if it is edible (see the photo below). 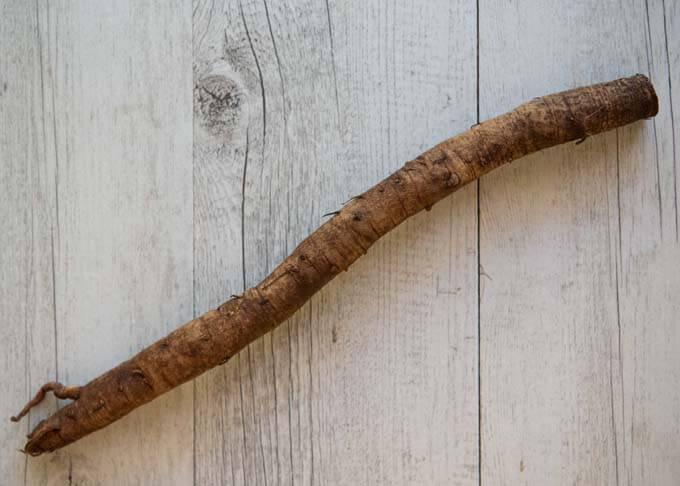 The shops usually sell the fresh roots with the dirt around them like this, so it looks like a dirty slender root. But the colour of the flesh is an ivory-like whitish brown.

The texture of the flesh is crisp and has a sweet flavour with a little bit of harshness, which you can eliminate by soaking it in vinegar water.

There are many ways of using burdock in cooking and I have already posted some recipes using it. Of those I already posted, I think the most popular dish among Japanese people is Braised Burdock and Carrot (Kinpira Gobō). People sometimes make Kinpira Gobō with just burdock. 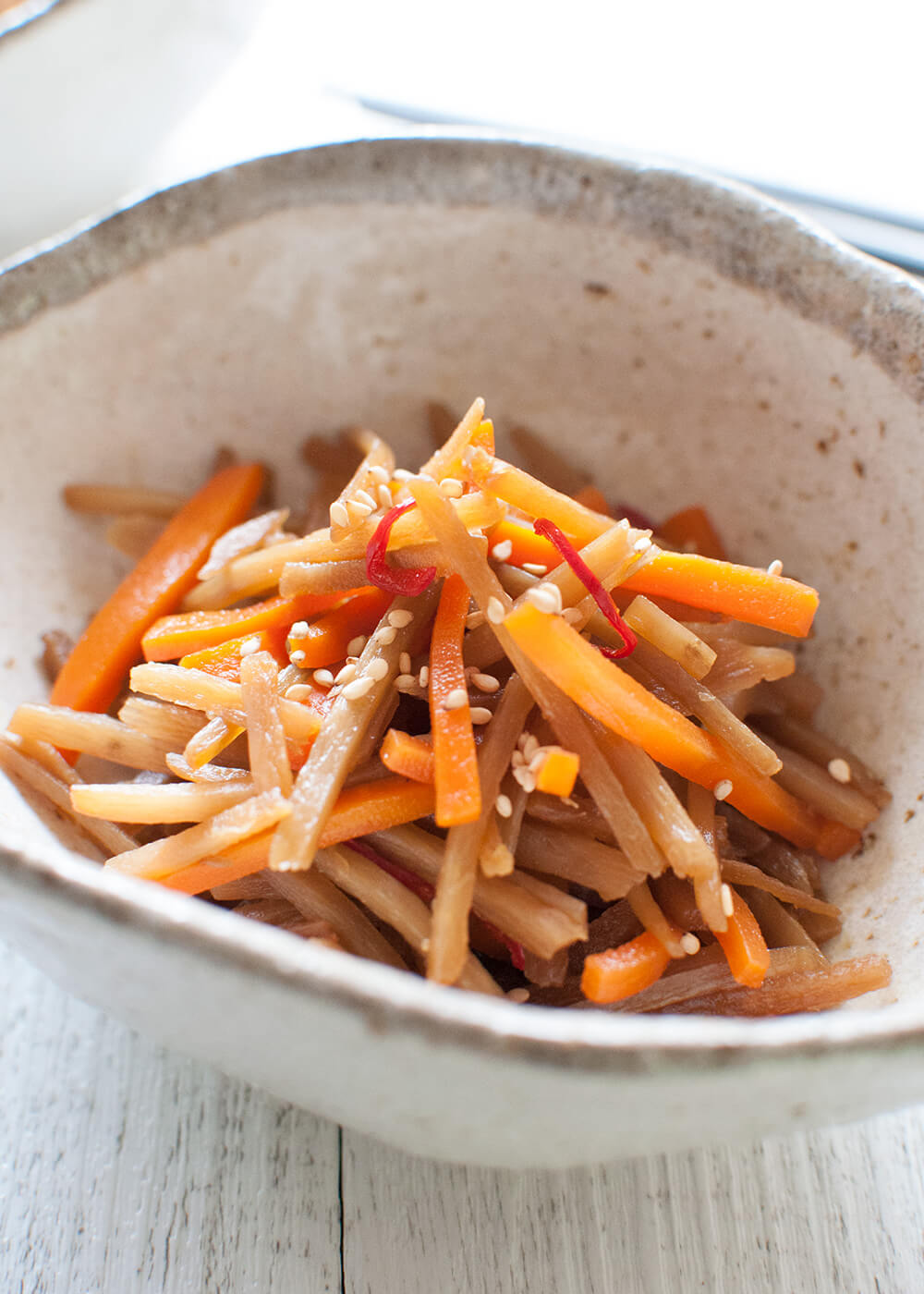 At the end of this post, in the section, Meal Ideas,I have listed all the dishes I’ve posted that use burdock.

I live in Sydney and buy fresh burdock at Tokyo Mart in Northbridge, sometimes at Asian grocery store in Top Ryde and Eastwood Asian shops.

You can buy frozen burdock at Japanese/Asian grocery stores. It comes in different forms – shaved, matchsticks and diagonally sliced. You can use frozen burdock for all of these dishes except Tataki Gobō and Burdock Chips.

How to make Burdock Chips

There is nothing else required to make burdock chips except a burdock root and oil. Oh, and some salt if you want to add a bit of saltiness to the chips. 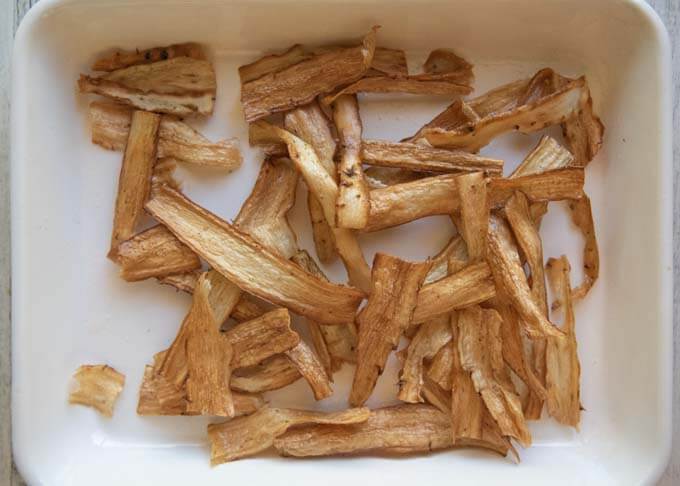 You can put quite a lot of burdock strips in the oil as they shrink. Depending on the thickness of the slice, cooking time varies. If the slices are made with a peeler, you probably need about 1½ minutes or less.

When the burdock starts turning light brown around the piece, it is usually done. When picking it up from the oil, you might feel that the burdock piece is a bit soft and not crispy. But when it cools down, it gets crispy.

In the case of burdock, it is said that the skin has the most nutrition. So, if you can wash the root using a hard brush and clean the dirt, it’s the best.

But if the burdock skin is very dirty and you feel uncomfortable using it without peeling the skin, remove the skin using a stainless-steel scourer or the back (spine) of a knife as follows. 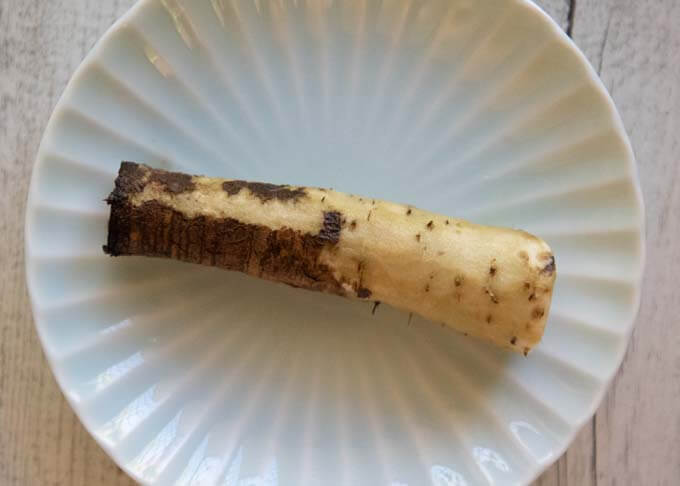 Burdock has polyphenol oxidase in its cells. When polyphenol is exposed to air, it causes a chemical reaction and changes the colour to brown. You will see the change of the colour from an ivory-like light colour to almost blackish as you peel the skin. The same applies when slicing it. 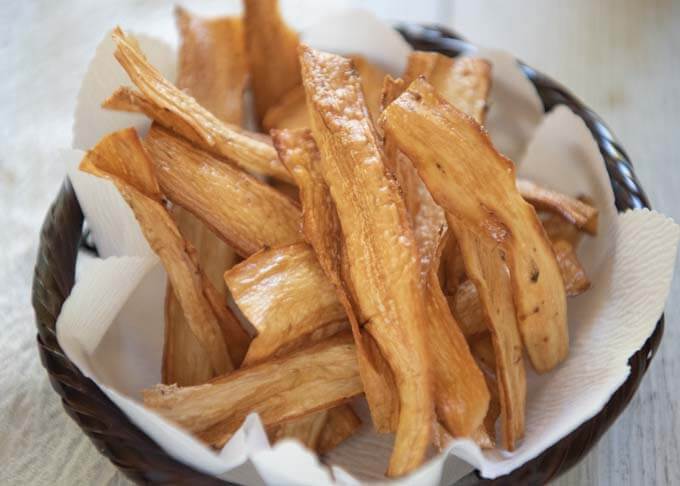 Just like making potato chips, you need to slice the burdock root thinly, into about 1-1.3mm / 1⁄16″ thick slices. You could slice the root diagonally to make an oval slice. But I sliced the root lengthwise into about 10cm / 4″ long ribbons. I think it makes the shapes of the chips more interesting.

Slicing burdock so thinly using a knife is not easy (it is almost impossible for me!). You’d need to use a slicer, if you have one, that can slice vegetables into the required thickness. If you don’t have a slicer, use a vegetable peeler but press the blade down onto the burdock flesh hard so that you get about 1mm / 1⁄32″ thick ribbons. 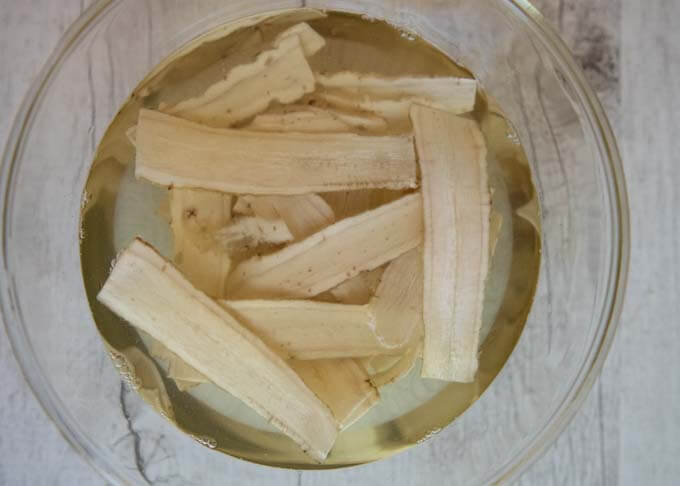 If you casually slice it with a peeler, you get very thin ribbons. Thin ribbons become very fragile when cooked but they are still good.

As explained in the previous section, you need to put the sliced ribbons in the vinegar water as soon as possible to avoid oxidation reaction (see the photo above).

If you can get a fresh burdock root, I strongly recommend making burdock chips, especially when you have a leftover root after making other dishes. Some Japanese and Asian grocery store/vegetable shops sell fresh burdock in Australia. 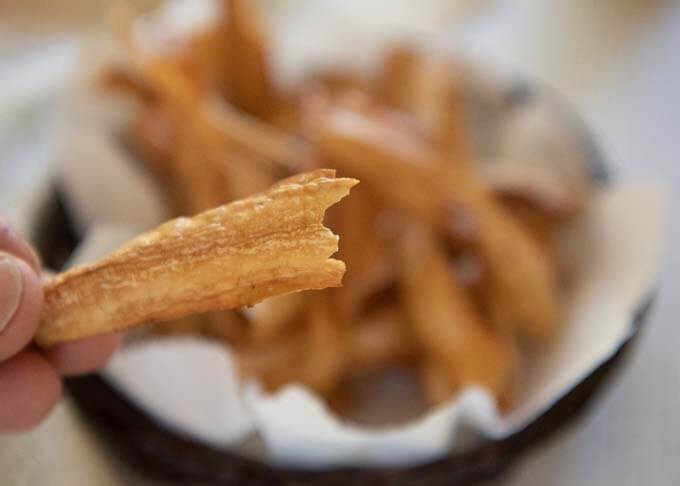 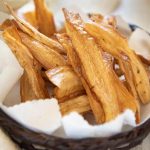 Today, I am sharing a recipe for Home-made Burdock Chips. They are quite easy to make, and they are delicious.

Cooking Time assume that burdock pieces are cooked in 3 batches.

1. My burdock root was about 3cm / 1¼" in diameter. See the details about burdock with photo in the post.

In Sydney, you can buy fresh burdock roots at some Japanese/Asian grocery stores.

2. Soak the burdock pieces to prevent them from getting exposed to the air, which makes the burdock blackish.

3. See the section, Peeling the Burdock Skin for more details of how to scrape the skin off the burdock using the back of the knife.

4. Burdock shrinks when deep-fried so you can cook quite a lot at once.

5. Depending on the thickness of the burdock ribbons, the cooking time varies. If you used a vegetable peeler, you may need even less than 1½ minutes.

Since it is very difficult to come up with a meal idea using the chips, I decided to list all the dishes using burdock instead. You can make one of these dishes with the fresh burdock and make some chips when you have leftover burdock! 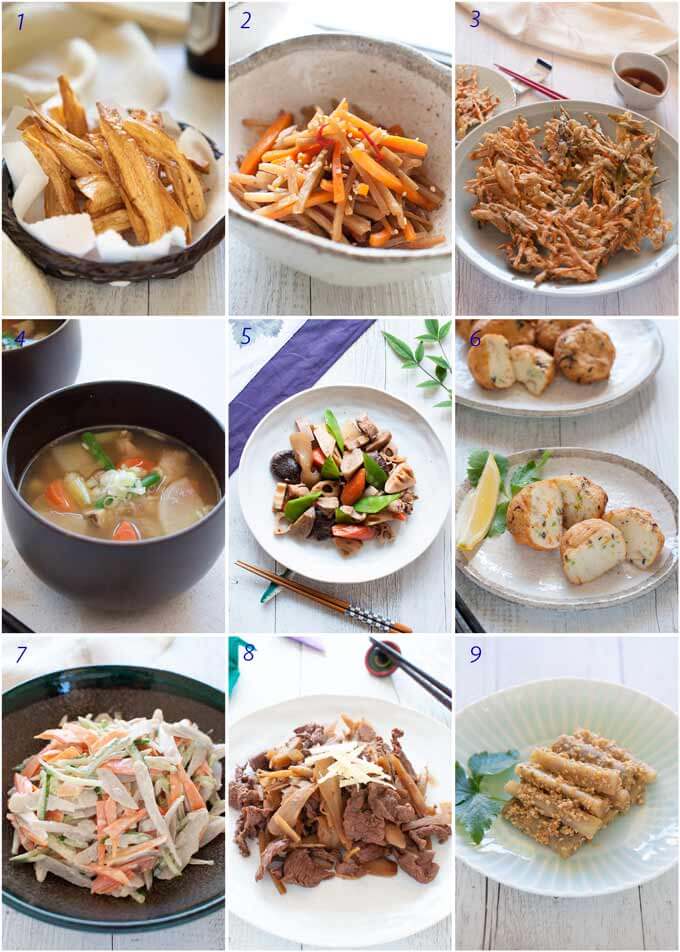