Tonjiru (豚汁) is a hearty miso soup with pork slices and vegetables. Packed with loads of vegetables and a small amount of pork, tonjiru is quite filling but you will be surprised to know the calories in tonjiru are low. It is considered to be a winter dish in Japan but I can’t see why we shouldn’t have it all year round because it’s delicious. 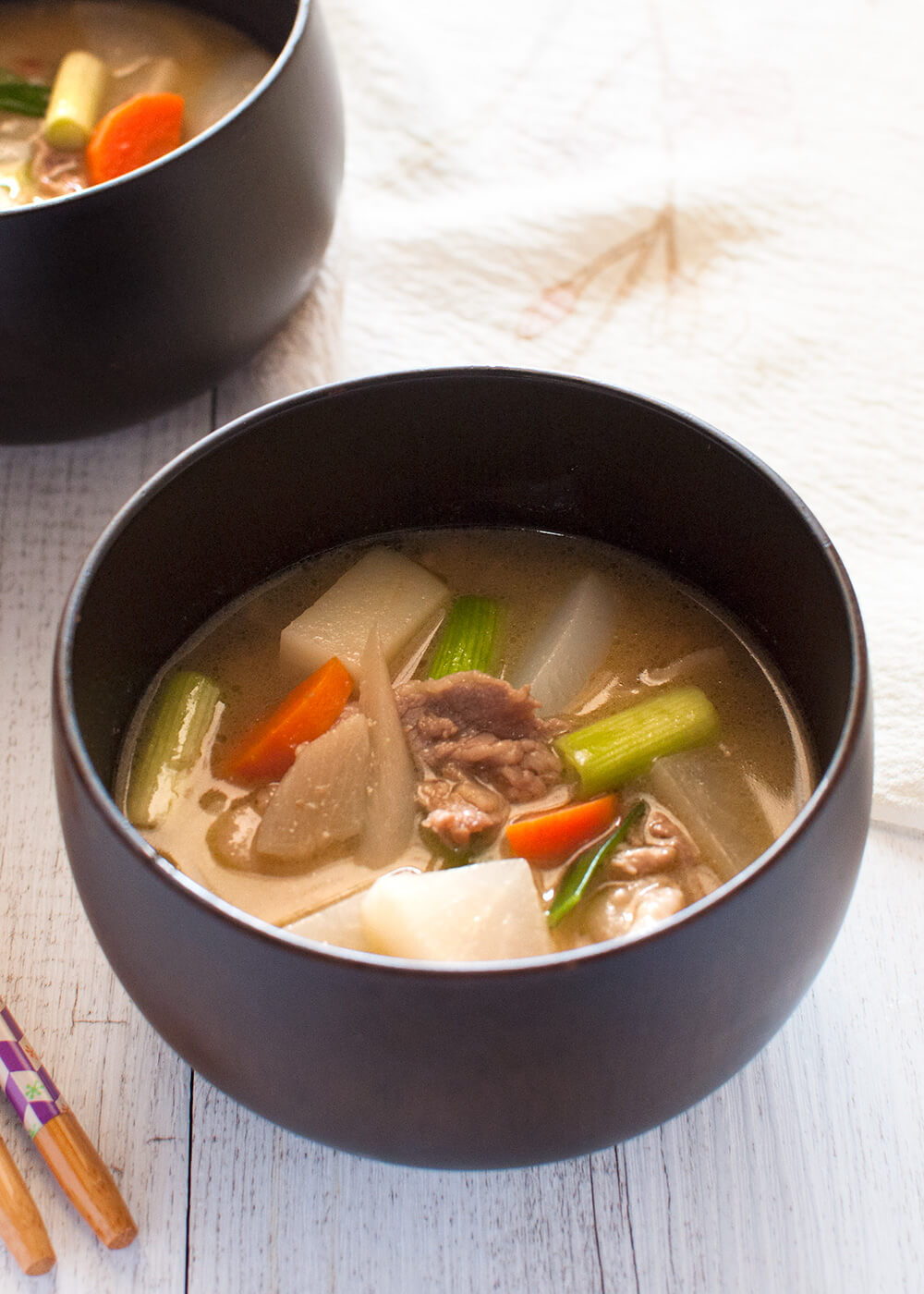 This is quite different from the usual miso soup as miso soups are normally just vegetables with no oil in them. Because of the fat content in this soup, people in Japan serve tonjiru in winter time, just like the Western style hearty soups are served in cold weather. When Sydney’s summer is over and the autumn weather starts kicking in, we sometimes get a chilly morning and night. On such days, I think of tonjiru.

Tonjiru does not get cold as fast as other miso soup because the surface of the soup is covered by a very thin film of oil from the pork. This film of oil keeps the soup hot, which is perfect on a cold day.

The ingredients can vary household by household but the meat has to be pork, otherwise you can’t call it tonjiru. 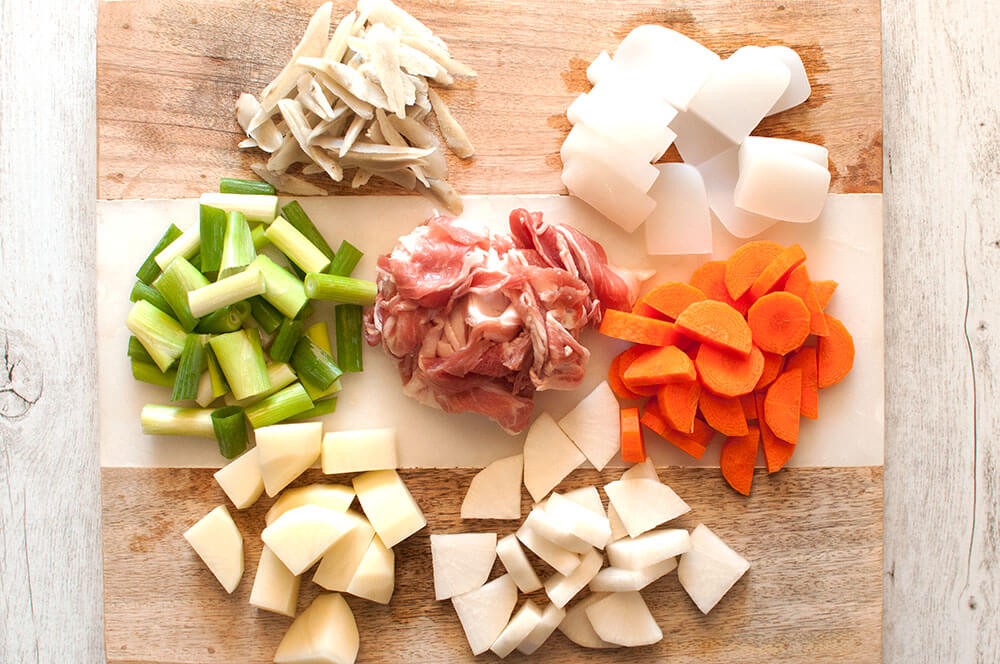 The cut of pork does not have to be pork belly but the meat has to be thinly sliced so that it gets cooked fast and tender. But I like pork belly as it makes the soup extra rich with additional fat. You could use slightly thicker slices of pork, if you like.

I touched on Konnyaku (こんにゃく) in my post, Sukiyaki when I was talking about shirataki. Konnyaku is made from konnyaku potato flour which has the texture of very firm jelly and sold as a block or small balls.

Konnyaku has virtually no calories and is high in fibre. It does not have much taste by itself but is used in a dish to give a different texture to the ingredients and/or volumes without increasing calories. 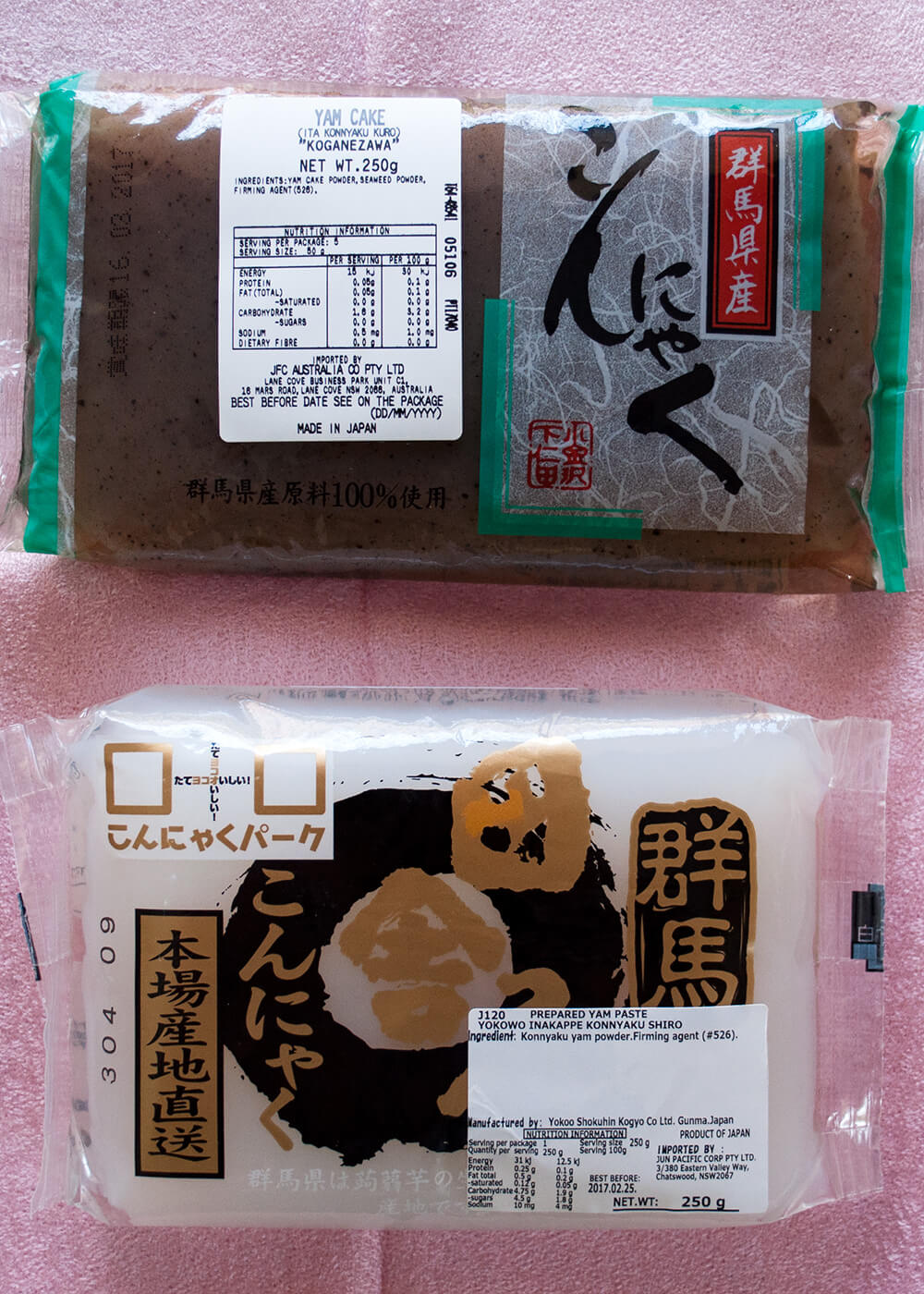 I used a pink garment on the table to show the colour of the konnyaku. It turned out to be too much pink and I know Nagi will have a fit.

The colour of konnyakun is usually light grey (bottom one in the above photo). But you may find very dark grey konnyaku with tiny black pieces in it. This is the konnyaku with seaweed (top one in the above photo). You might also see a greenish one or reddish one which are usually in a small ball shape. They have aonori (seaweed flakes) and tōgarashi (chilli) in it respectively.

You can buy konnyaku at Japanese/Asian grocery stores.

I wanted to use taro but I could not find it at the vegetable shop nearby so I used potato instead. I had a bag of frozen shredded burdock so I used it instead of getting a fresh burdock root and slicing it. 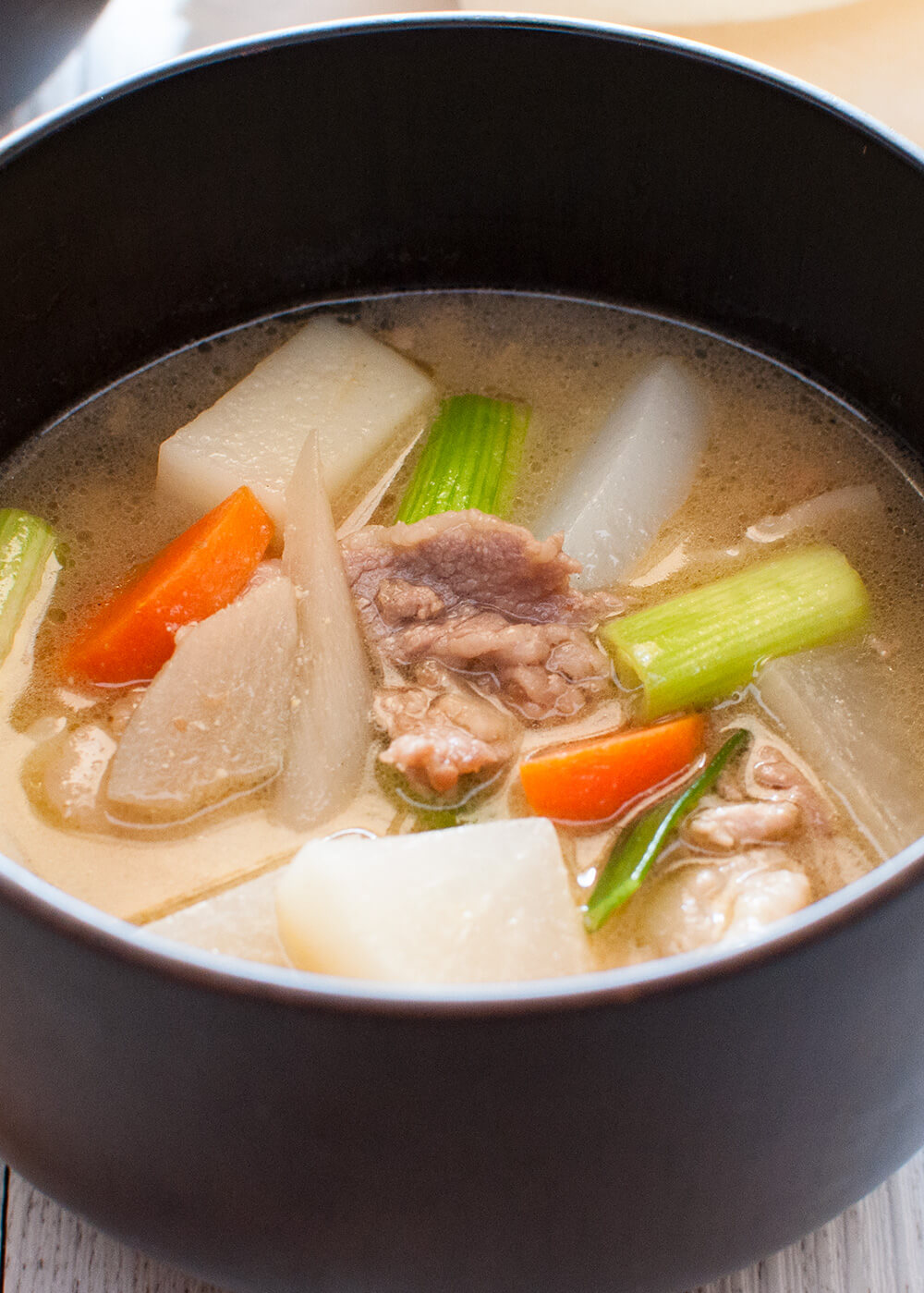 The way you cut the vegetables also varies. I sliced most of them but you can cut them into cubes or random shapes. As long as the size is similar and the cooking time is similar, no problems. The burdock I used would have cooked through faster than other vegetables since they were tiny and thin. But burdock is the kind of vegetable that will retain its shape even when cooked too long so it worked well. If I sliced the carrots too thin, for example, they would have cooked too soft and broken into pieces by the time the other vegetables were ready.

When you make miso soup and serve it in an owan (お椀, Japanese miso soup bowl), it is rather soupy and you don’t usually see much of ingredients in it on the surface. Tonjiru is quite the opposite. The ingredients are piled up in a bowl, usually showing above the surface of the miso soup. It is quite important to get the balance right between the amount of ingredients and the soup. If I can’t see the ingredients, then I would call it miso soup with pork and veges, not tonjiru. I hope you get the idea.

Tonjiru is sometimes topped with the white part of shallots (scallions) finely chopped, accompanied by a little bottle of shichimi tōgarashi (七味唐辛子), Japanese spice mixture with chilli) or simply called shichimi (七味). Here is a sample bowl of tonjiru with shallots and shichimi on top. 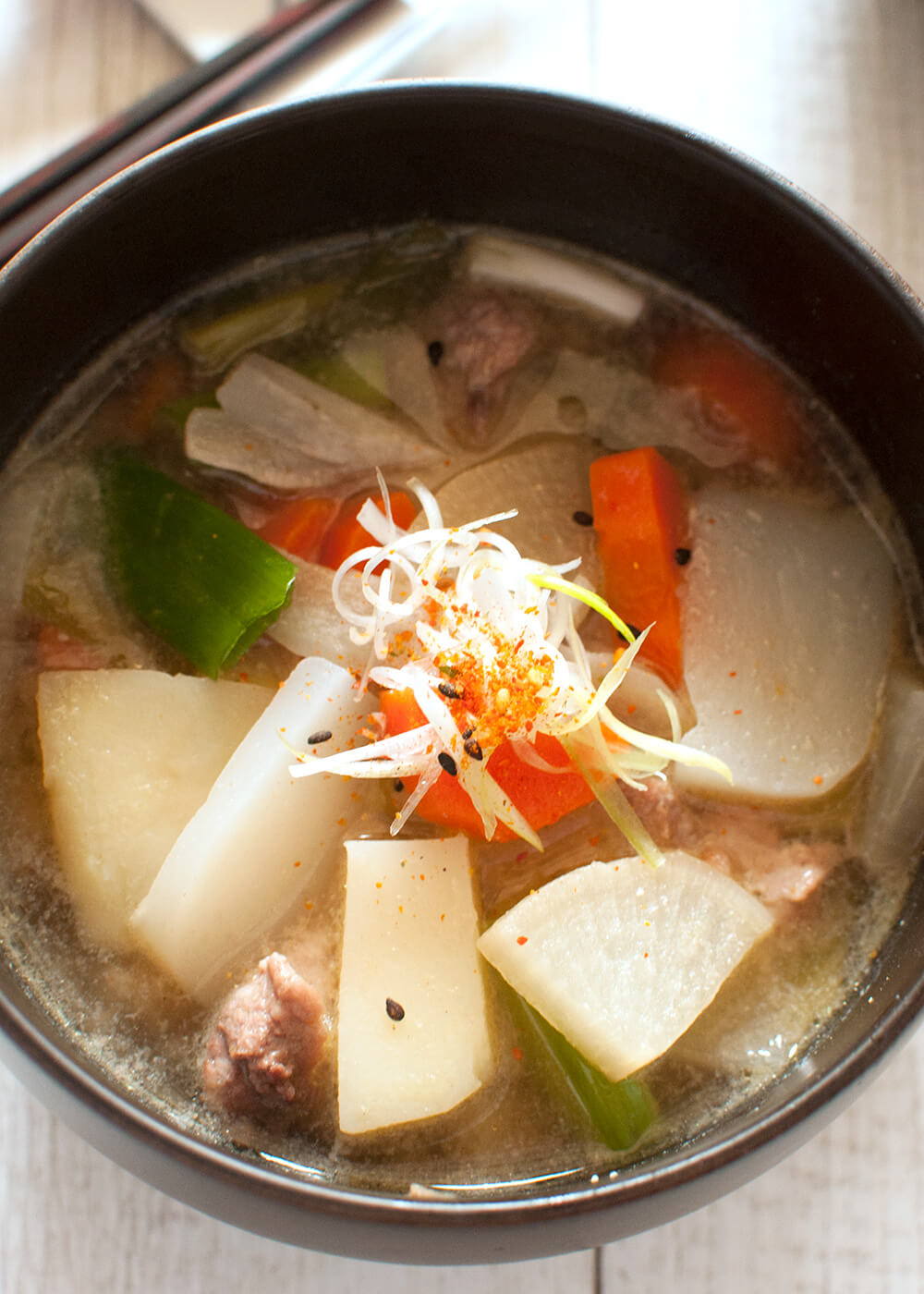 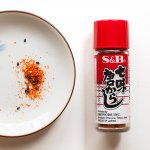 There are even specialty shops in Japan that usually have a long history in the business. Some shops let you choose ingredients to make your own version.

Shichimi tōgarashi goes well with miso based stew and Japanese style noodle soups, which I will post sometime this year.

When I feel that a main dish might be slightly light, I sometimes make tonjiru instead of normal miso soup to add extra volume to the meal. In this case, I serve tonjiru in a standard owan. But I sometimes eat tonjiru as a soup dish without a main, in which case I double the quantity and serve it in a large bowl just like the Western style soups. 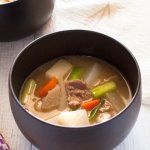 Print
Tonjiru (Pork and Vegetable Miso Soup)
Prep Time
10 mins
Cook Time
15 mins
Total Time
25 mins
Tonjiru (豚汁) is a hearty miso soup with pork slices and vegetables. Packed with loads of vegetables and a small amount of pork, tonjiru is quite filling but you will be surprised to know the calories in tonjiru are low. It is considered to be a winter dish in Japan but I can't see why we shouldn't have it all year round. It's delicious.
Recipe Type: Soup
Cuisine: Japanese
Serves: 2 -4
Author: Yumiko
Ingredients (tbsp=15ml, cup=250ml)
Vegetables (note 4)
Garnish (optional)
Instructions
Recipe Notes

1. You can use any cut of pork as long as it is not for stewing. It is important to slice the meat thinly into bite size pieces so that it cooks faster and is easier to eat.

2. Since the soup will be full of flavour from plenty of vegetables and meat, you can just use water instead. If you use dashi stock, it will add more umami to the soup.

3. Depending on the type of miso, and the brand within the same type of miso, saltiness varies. If you make dashi stock from the granular instant stock powder, it might contain salt as well. So, you will need to adjust the amount of miso by diluting the miso into the soup in stages.

4. The combinations of vegetables used in tonjiru can vary. You can add other vegetables according to what you have. Root vegetables good for stewing should be nice. I have listed some in my blog.

5. If the carrot is fat, you may need to quarter it lengthwise. The idea is to cut the root vegetables into the sizes so that their cooking time are similar.

6. Konnyaku is made from konnyaku potato flour which has the texture of very firm jelly and sold as a block or small balls. You can buy konnyaku at Japanese/Asian grocery stores. Please see my post above for details.

7. Burdock is not commonly sold in Sydney but some Asian vegetable shops or grocery stores sell fresh burdock which is a thin long root. However, you can find shredded or julienned frozen burdock at most Asian/Japanese grocery stores.

8. If the meat does not stick to the bottom of your pot when sautéed, there is no need to add oil since the pork belly contains streaks of fat in itself. I used oil because my pot was not good with it.

If you are using leaner meat, you may want to add a small amount of oil to sauté.