Wagyū Steak Don is a very simple donburi (rice bowl dish) recipe with marbled fine Wagyū beef steak and a tasty sauce poured over it. The slightly sweet soy-based sauce has complex flavours that go so well with the steak.

I think it is best not to fiddle with a high-quality meat like Wagyū beef. Simply cook it on a stove top until it is cooked to your liking. You will taste a hint of sweetness from the marbled fat scattered in the flesh.

The majority of Wagyū beef on the market is from Japanese black. Depending on where the cattle is raised, Wagyū beef is branded with the name of the region such as Kobe beef, Matsusaka beef, Yonezawa beef, and Ōmi beef.

After defining the Wagyū breed in 1940, Japan prohibited exportation of Wagyū, including sperm and embryos, to try to maintain the purity and quality of Wagyū beef.

Unfortunately, the Wagyū cattle brought to the USA for a scientific study was abused and a large number of Wagyū sperm and embryos were passed onto various countries by 1990.

Currently, there are several countries that breed Wagyū beef and Australia is one of them. The Australian Wagyu Association is the largest breed association outside Japan and both pure bred and cross-bred are farmed in Australia for domestic and overseas markets.

Japanese Wagyū beef is graded according to the Japanese Grading System. The grading is set based on the meat yield of a cow and the quality of the meat.

The grading ranges from A5 to C1 where the letters A, B, and C indicate the yield (high to low), and the quality of meat is determined by several factors – indicated by the numbers 5, 4, 3, 2, and 1 (high to low). But the most critical factor in the grading of quality is the marbling.

Beautifully presented marbled A5 Wagyū beef in the food hall of a department store – sukiyaki slices (left) and steak (right).

When you think of Wagyū, you probably think of marbling – the intramuscular fat that makes the meat looks almost pink in some cases. This marbling makes Wagyū very tender, juicy, and rich.

Depending on the percentage of the fat, the beef is scaled from 1 (lowest fat) to 12 (highest fat). The butcher I bought the Wagyū from had scale 5 and scale 8. I bought the scale 8 Wagyū sirloin steak. It was much more expensive than the scale 5, but I wanted to try it.

I understand that the grade A5 Wagyū beef can only be produced in Japan, although it is exported to many countries.

You should be aware that the Wagyū beef with the highest ranking of A5 (and most expensive) does not necessarily mean the tastiest. But I think it is safe to say that A5 Wagyū beef is very tender and melts in your mouth when cooked right.

Wagyū beef is much richer than normal beef steak due to the amount of fat embedded in the flesh. You are not meant to have a huge piece of Wagyū steak the way the Western-style steak is served at steakhouse.

What’s in My Wagyū Steak Don (Wagyū Stake on Rice)

I put the ingredients into two groups – Steak on Rice and Steak Sauce.

For each serving, I only used slightly over 100g / 3.5oz of steak per serving. When the Wagyū beef came with a band of fat on the outside, I trimmed it and heated it to get the oil out of it instead of using oil.

Instead of apple juice, you can grate an apple. If you want to add a stronger sesame flavour to the sauce, you can add a very small amount of sesame oil.

You make the sauce after cooking the steak so that you can use the tasty steak oil in the frying pan. I put the sauce through a sieve and removed the grated vegetable bits, then mixed in the ground sesame seeds.

I searched websites on how to cook Wagyū steak. There were so many articles about it, both in English and Japanese. The majority of them suggest that you cook the meat at high temperature to seal the surface first, cook for a while, then turn it over once to finish cooking.

But the world-famous chef, Tetsuya Wakuda shows a totally different way of cooking Wagyū beef. He uses low heat and turns the meat over many times until the meat is cooked to your liking. Another famous chef, Heston Blumenthal also flips the meat many times so as not to get the meat too hot. So, I decided to follow Tetsuya’s method today.

Tetsuya also says not to use tongs when handling a Wagyū beef steak because lifting the meat will stretch the flesh. Use a spatula to turn the steak over. 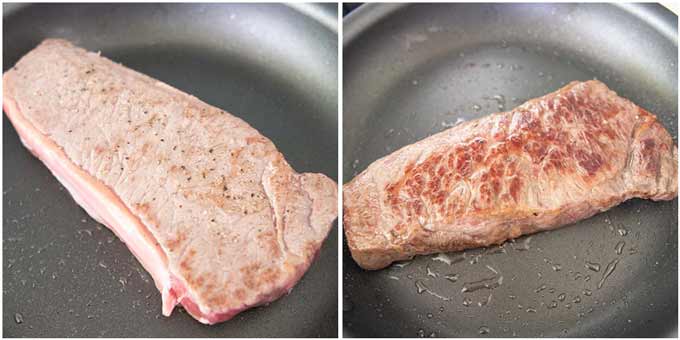 When the steak is cooked about right, the surface of the steak becomes nicely browned.

Even if there are not a lot of beef slices on the rice, you will feel full because of the richness of the marbled beef.

The sauce goes very well with not only Wagyū beef, but any other steaks. Wagyū Steak Don is also great for lunch. Why don’t you indulge yourself and have a homemade Wagyū Steak Don?

Wagyū Steak Don is a very simple domburi (rice bowl dish) recipe with marbled fine Wagyū beef steak and a tasty sauce poured over it. The slightly sweet soy-based sauce with complex flavours goes so well with the steak.

1. My Wagyū beef was a marbling scale 8 sirloin steak of about 2cm / ¾" thick. You can have a lower scale marbling of course, and the thickness can vary. You can actually use normal beef steak instead. Just call it Beef Steak Don.

2. A sirloin steak usually comes with a band of fat on one side. You can trim the fat and use it.

3. You could use store-bought ground white sesame. But I ground the sesame seeds using mortar and pestle so that some coarse bits remain in the ground sesame seeds to give a texture to the sauce.

4. The cooking method that I used in this recipe is quite different from the normal way of cooking a steak. I used the method used by the world-famous chef, Tetsuya. He says that nicely marbled Wagyū beef should not be cooked at high temperature to seal the surface of the meat by charring it.

But if you are used to the normal cooking method, feel free to use your method.

5. Since the heat is low, it will take a while to extract the oil from the beef fat. If the beef fat is burning, your frying pan is too hot.

6. Because the steak will be sliced and placed on rice, I recommend cooking the steak to medium or medium well so that there will be no blood stains on the rice. It took me about 10 minutes to cook my steak using Tetsuya's method.

Today’s main, Wagyū Steak Don is a rich dish and can be heavy if the marbling scale of your steak is quite high. So, I picked side dishes with plenty of vegetables. I was also careful to select dishes with bright colours since brown is the dominant colour of the main dish.

The vinegar dressing of Cucumber and Seaweed Sunomono is refreshing to cleanse the palate after eating a piece of Wagyū steak.

I picked Kenchinjiru to add more vegetables to the meal.