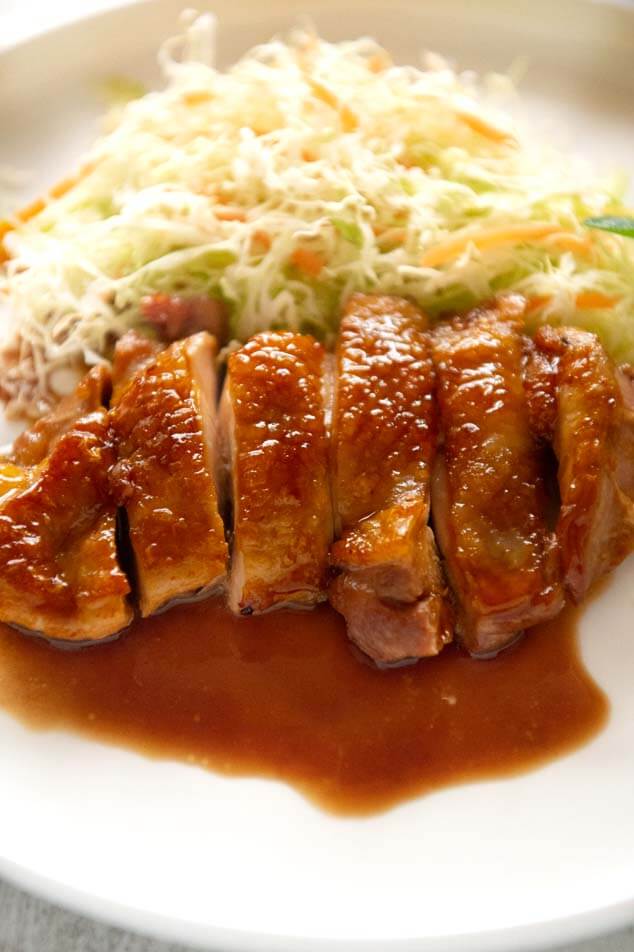 It is one of the most popular Japanese dishes among Aussies and I presume in other parts of the world as well. At almost every Japanese restaurant in Sydney, you will find Teriyaki Chicken on the menu.

I often find that the flavour of the Teriyaki Chicken at restaurants is slightly Westernised and I can sometimes even taste garlic in it. But the recipe I am sharing today is the traditional Japanese way of making Teriyaki Chicken. 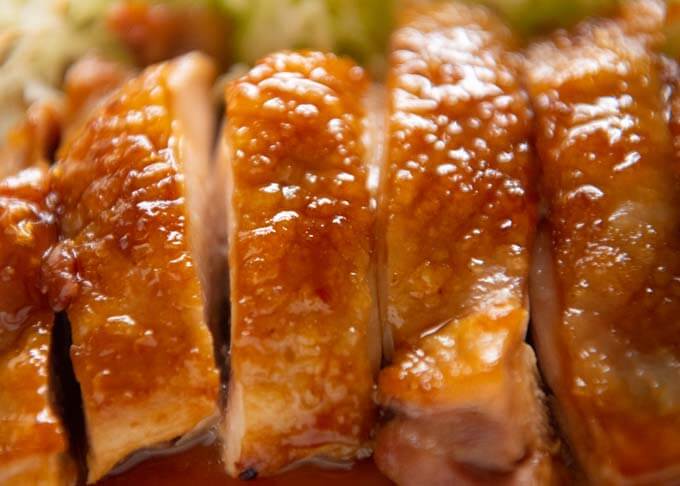 You can’t talk about Teriyaki Chicken without mentioning Teriyaki Sauce.

This is a very simple sauce that is made up of only four ingredients. But once you know the proportion of ingredients, it becomes so easy to cook flavoursome dishes in 5-10 minutes. Any dishes called ‘teriyaki’ something uses this Teriyaki Sauce.

Here is the sample photo of soy sauce, sake and mirin I use. At supermarkets in Australia, you might find different brands of mirin and cooking sake such as Bento brand. They are fine to use too. Please visit Japanese Dressings for more details about them. 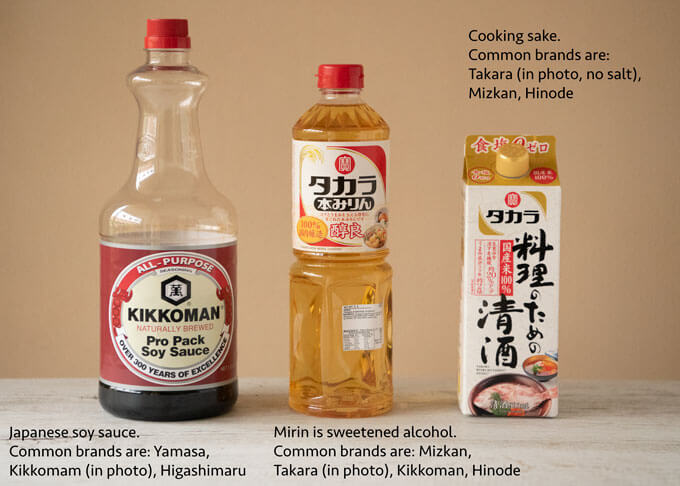 Combine them together and mix well to dissolve the sugar. You can heat the mixture slightly to speed up the process of dissolving the sugar if you like.

This sauce is a very good sauce to have on hand. It keeps for weeks in the fridge and you can sauté or grill fish/meat/vegetables and pour the sauce over it. You could add grated garlic/ginger to vary the flavour too.

But if you prefer chicken fillets without the skin on, that’s OK. You can also use chicken breast but you might find that the cooked chicken is slightly dry.

Thigh fillets are usually thick on both sides and thin in the middle. It is important to make the thickness of the fillet even. 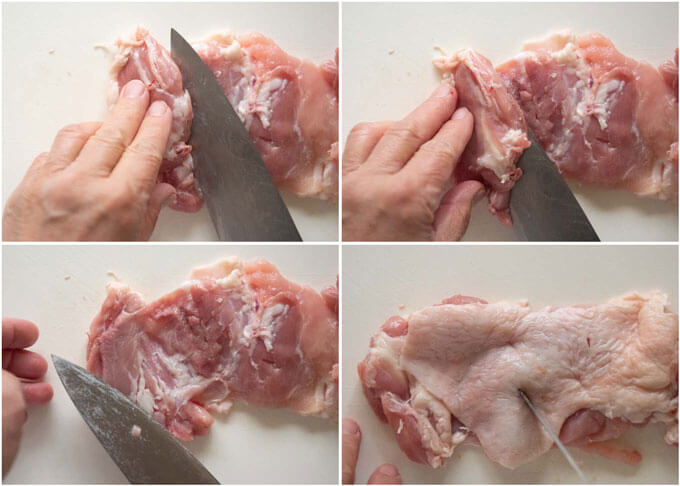 Place a fillet on a cutting board, skin side down, and make a cut horizontally and outward where the meat is thick and butterfly it (see the photo below and the Video).

Using the tip of the knife, poke the skin randomly (see the Video). This will allow the Teriyaki Sauce absorb into the flesh better.

Have you ever experienced the teriyaki sauce not sticking to the chicken evenly and the sauce is somewhat mixed with oil? This is because you had too much oil in the frying pan before adding the Teriyaki Sauce to it.

The chicken is covered with oil and also the excess oil and the sauce splits as they do not mix well. To prevent this to happen:

When you do the above, you will find that the sauce sticks to the cooked chicken and you will have a saucy Teriyaki Chicken. 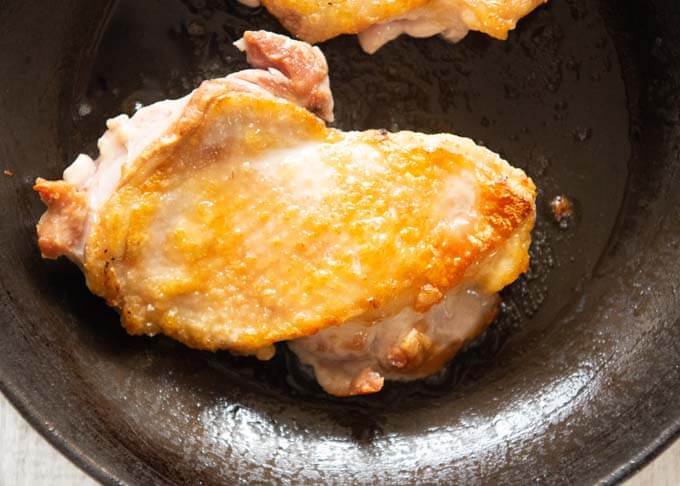 Most Japanese meals are served in such a way that you can pick up and eat the food with chopsticks without needing to cut it. In this recipe, I sliced the chicken after it was cooked so that you can still see the whole fillet of chicken, and it is easier to pick up a piece with chopsticks. 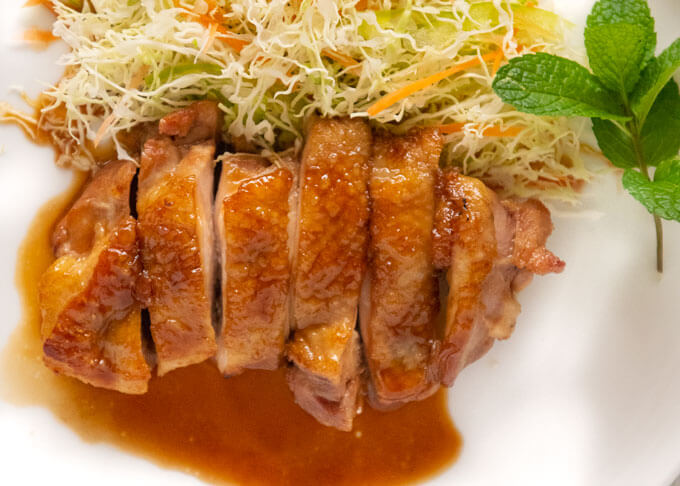 But if you are eating Teriyaki Chicken with a knife and fork, you don’t need to slice the chicken.

I served Teriyaki Chicken with shredded cabbage but any green salads or boiled vegetables are OK. If you are using a dressing, I’d suggest a light one.

Instead of shredded cabbage, you can grill or blanch vegetables to give extra colour to the dish. Below is a Teriyaki Chicken don with charred shallot/scallion stems and blanched snow peas that I just ate after taking these photos (yum, yum). 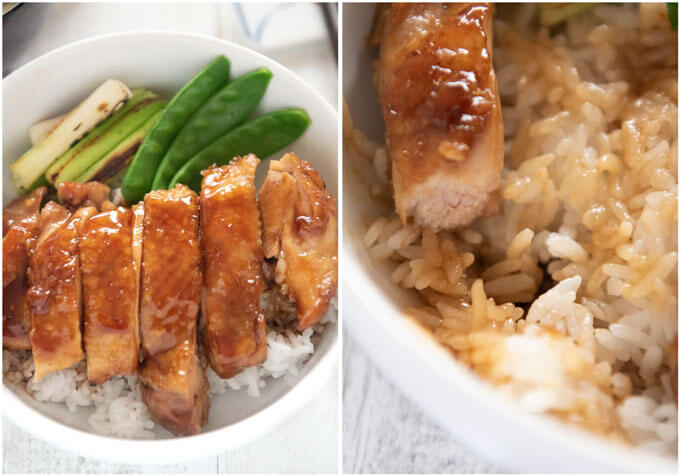 I cut the white part of shallots/scallions to 5cm/2″ long then cooked in a frying pan with no oil until they get burnt here and there. They go surprising well with the Teriyaki Sauce.

If you are making Teriyaki Chicken don, cook Teriyaki Chicken as per the recipe but increase the amount of Teriyaki Sauce by 50% so that more sauce will be poured over the chicken and dribbled onto the rice, making the rice so tasty.

I hope you like my version of Teriyaki Chicken.

Teriyaki Chicken is one of the most popular Japanese dishes. The Teriyaki Sauce is so easy to make, it’s just a mixture of soy sauce, sake, mirinand sugar. You do not marinate the chicken in the sauce to make Teriyaki Chicken. Just sauté the chicken and cook it in the sauce, which takes only 15 minutes in total! See the video below the recipe to believe it.

1. I could not find chicken thigh with only skin on. So, I bought chicken thighs with skin and bone on and removed the bones.

You can use skin off and even chicken breast if you prefer. The texture of the chicken will be different, particularly with chicken breast, but the flavour should be the same.

3. You can pick any vegetables to go with the Teriyaki Chicken but I would recoomend either fresh salad or boiled vegetables.

4. You can warm up the sauce on the stove or in the microwave to dissolve the sugar faster if you want.

5. Depending on the thickness of the thigh fillets, time will vary.

6. It is important to remove the excess oil as much as possible. Too much oil from the fat prevents the teriyaki sauce from sticking to the meat. This is the reason for using a non-stick frying pan with no oil. If using a normal frying pan, I’d suggest that you oil the pan with a small amount of oil when heating it up.

9 Nutrition per serving including salad.

As Chicken Teriyaki comes with a sweet sauce, I serve Cucumber and Seaweed Sunomono (Vinegar Dressing) to cleanse the palate. Instead of Sunomono, you can serve something with vinegar but perhaps not with Amazu (sweet vinegar) as the teriyaki sauce is sweet.

Instead of miso soup, I though clear soup might be better suited to the strongly flavoured main dish. 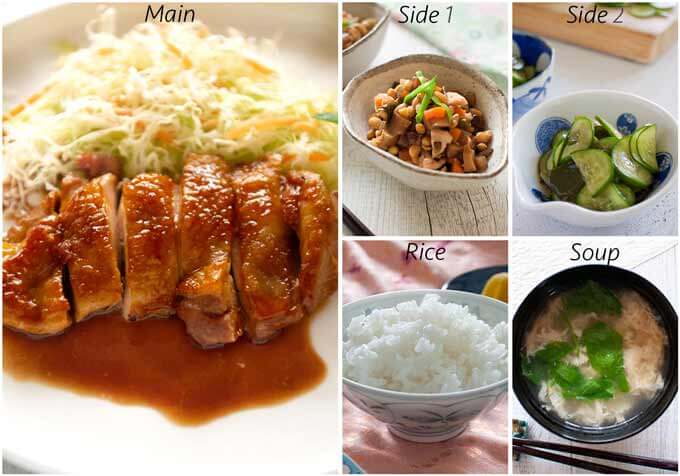