Octopus and cucumber sunomono is one of the regular Izakaya dishes. Boiling a whole octopus is quite simple and you can make this sunomono in no time. It tastes better when chilled. 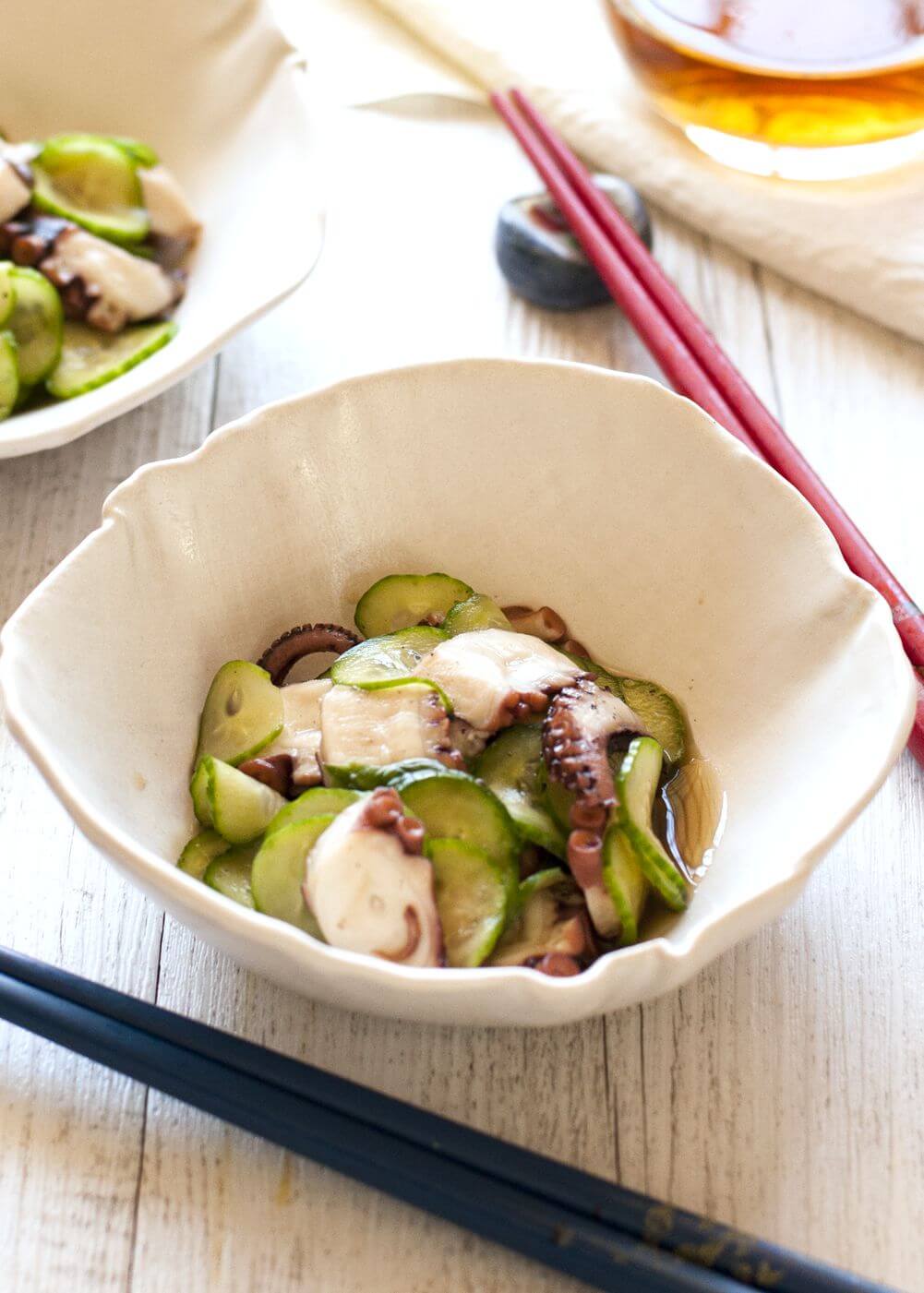 Octopus is a quite strange looking sea creature and I am aware that some people are put off by the appearance, not to mention eating it. But in Japan, octopus is popular and appears in home cooking just like any other fish. It seems that octopus was consumed back in the Yayoi period in Japan which was between 300BC and 300CE. So, the bond between Japanese people and octopus is pretty strong.

Octopus is eaten as sashimi as well but, unlike other sashimi, it isn’t served raw but boiled. It is possible to eat raw octopus if it’s very fresh but you will rarely see raw octopus sold as sashimi even in Japan. Often at supermarkets, octopus is already boiled and even sliced for sashimi. But in Sydney, I can only buy uncooked octopus and I need to boil it myself. How about your country?

I talked about going out fishing on weekends when the children were little in my post “Sashimi”. One day, we went to one of the northern beaches close to where Nagi currently lives. There was a rocky area which was flat and safe for the kids to run around while the adults were fishing.

When the small waves splashed over the flat rocky areas and subsided, we found an octopus in a little pool of water. My children found it and got very excited, trying to catch it. But Nagi, who was probably around 8 or 9 years old at the time, said immediately “Let’s catch it and eat it Mum!” I chuckled thinking what kind of kids would think of eating it straight away. Well, she turned into a food blogger, didn’t she? 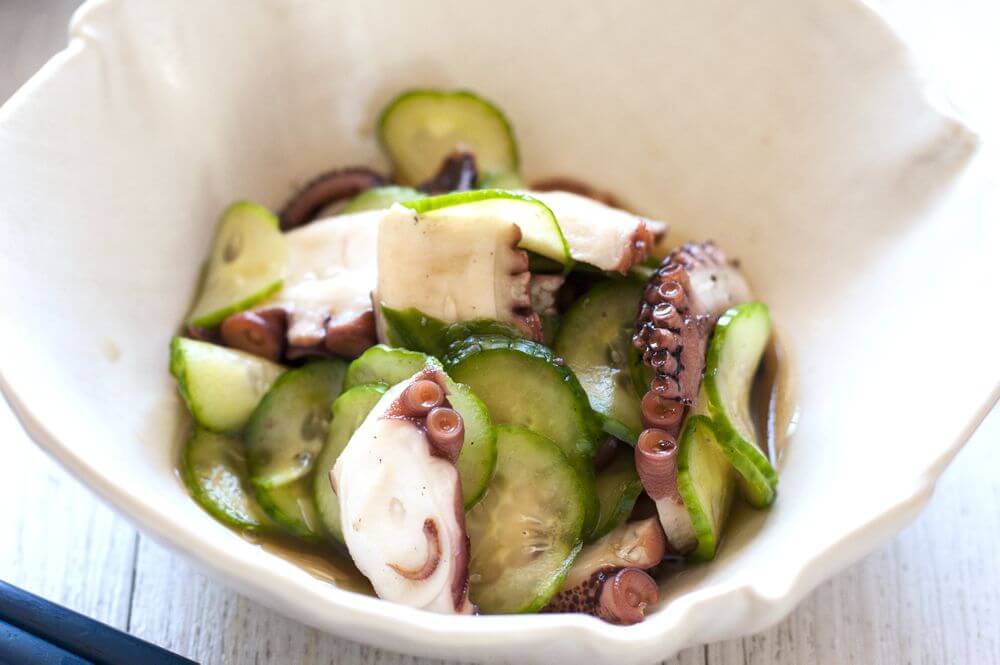 How to Remove Slimy Substances

The octopus sold at the fish shops in Sydney do not have a slimy coating as they are already cleaned. So, I can skip this bit. I also get the fish shop to clean them and remove the guts.

HOW TO BOIL OCTOPUS

There is a little technique to boiling an octopus but nothing is difficult.

Bring water in a large pot to a boil. Add a pinch of salt and a dash of vinegar. Hold the top of the octopus (the round part, which is actually the body) and dip most of the legs in the boiling water. Move them up and down like yo-yo. This will ensure that the octopus legs are nicely curled. Once the legs are curled up, drop the entire octopus into the boiling water.

Cook for about 4-5 minutes then turn off the heat. Leave the octopus in the hot water for another 5-6 minutes. The total time in the boiling water should be no more than 10 minutes from when you dropped the octopus in. Cooking the octopus too long will make the flesh tough. Take it out and cool it down. The below is a boiled octopus and was just less than 400g. 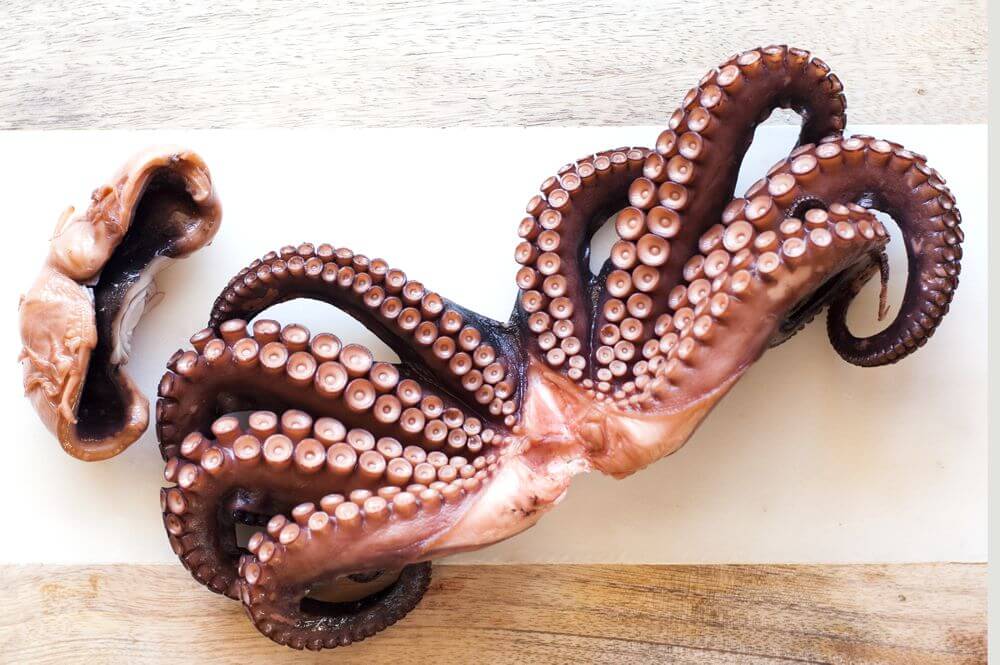 Cut where the legs start and detach the body from the legs. If you see the mouth (hard black bits in the centre where the legs join together), push it out and remove it. Separate the eight legs by cutting where they are connected.

To slice an octopus leg, place it with the thicker end to the left (for a right hander) on the cutting board. Place a knife diagonally tilted to the right and slice into 2-3mm (1/16-1/8″) thick pieces. This method of slicing is called sogigiri (そぎ切り). You can see the photo of sogigiri in my post  “Sashim”.

If you are making sashimi out of it, you should tilt the knife a lot so that the slice is longer like the sliced octopus in the photo below. If making sunomono like my recipe, then you don’t need to make the slice so long. I tilted the knife about 45 degrees to slice the octopus for the sunomono recipe.

You could also cut the legs into chunks and braise them with other vegetables. I might post a recipe in the future. I usually cook the body part of the boiled octopus this way as you can’t make nice slices out of it due to the shape. 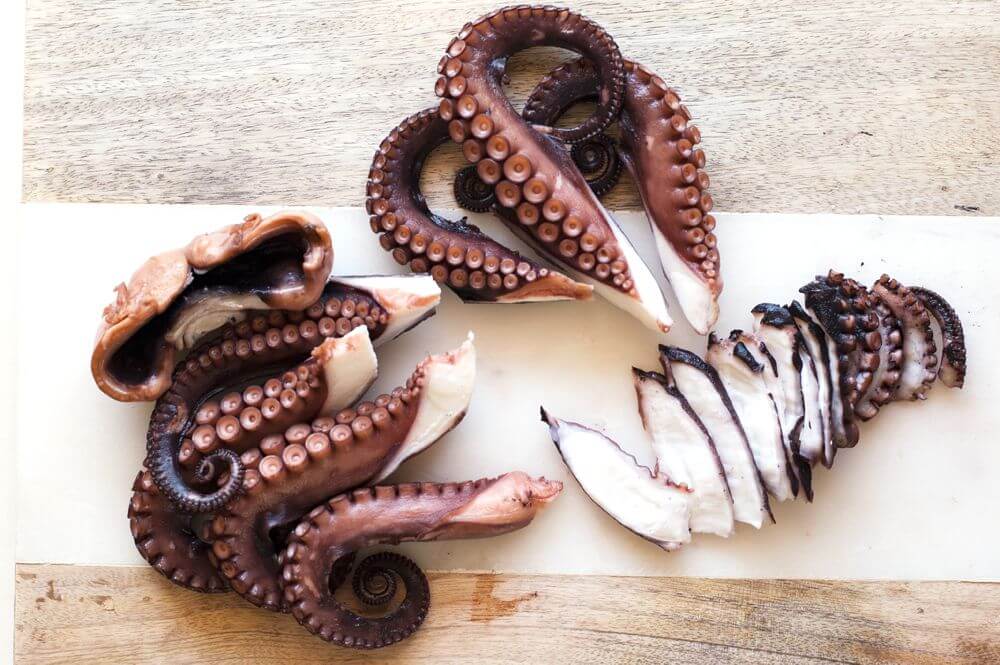 Today’s dressing is called “sanbaizu” and you can find these dressings in Japanese Dressings. Sanbaizu has a stronger vinegar flavour which marinates octopus well. 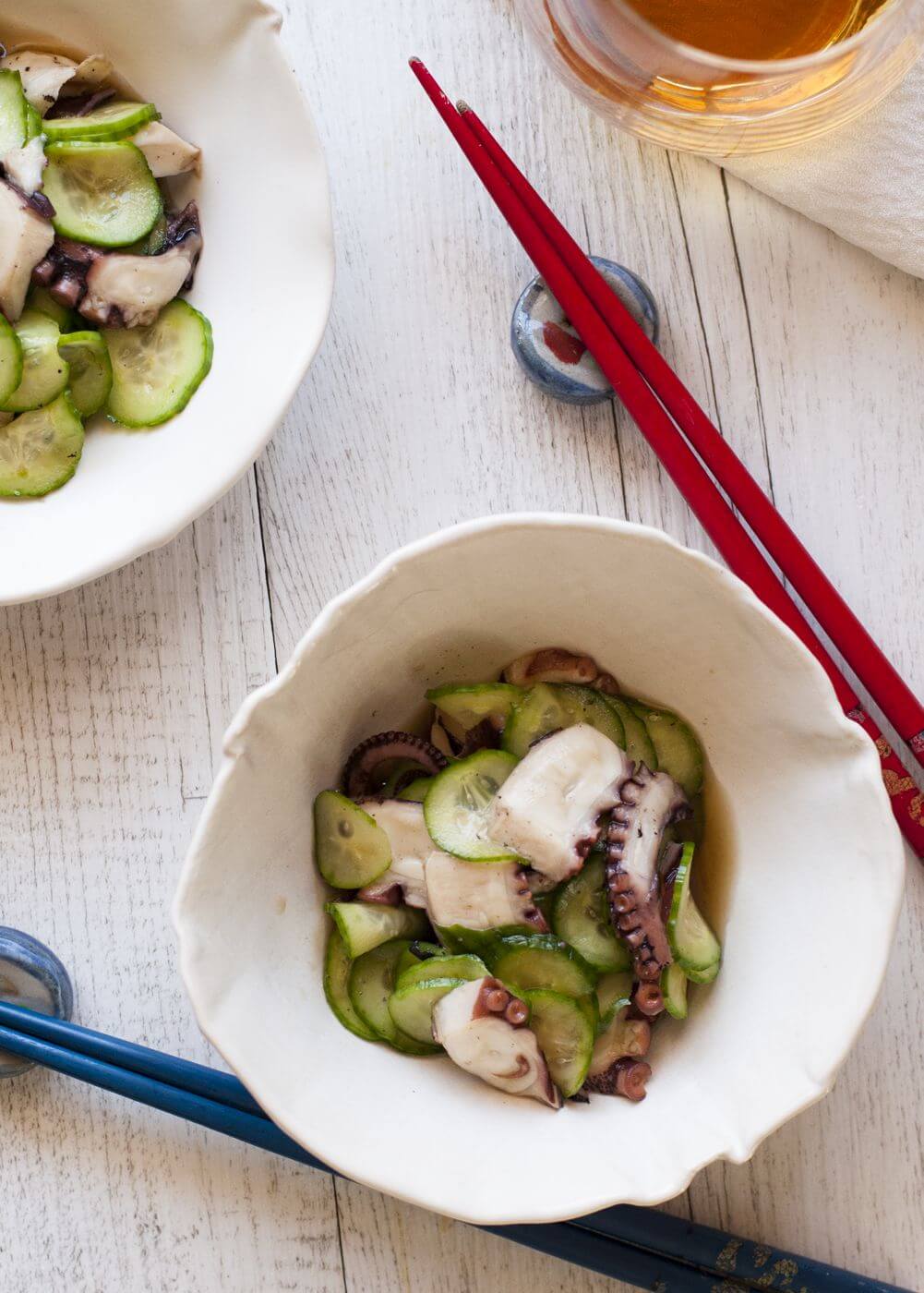 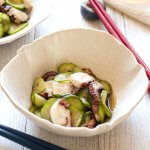 Print
Octopus and Cucumber Sunomono (Vinegar Dressing)
Prep Time
10 mins
Total Time
10 mins
Octopus and cucumber sunomono is one of the regular Izakaya dishes. Boiling a whole octopus is quite simple and you can make this sunomono in no time. With a bit of technique, you can boil octopus to tender meat. It tastes better when chilled.
Recipe Type: Appetiser
Cuisine: Japanese
Serves: 2
Author: Yumiko
Ingredients (tbsp=15ml, cup=250ml)
Vinegar Dressing
Instructions
Recipe Notes

1. Octopus legs should be sliced from the left (for the right hander), which is called sogigiri (そぎ切り). You can see how it is done in my post Sashimi. See note 4 about how to boil octopus.

2. It would be a challenge to slice cucumbers into such thin slices unless you are good with knife. I use the Kyocera brand slicer that I introduced in my post Lotus Root and Mizuna Salad.

3. If you have a bit of time, then I’d suggest that you chill the sunomono in the fridge for a while. It tastes better in my view.

4. To boil a whole octopus: