Just like my teriyaki chicken, teriyaki salmon is another popular home cooking dish in Japan.  It is so quick and easy to make. The teriyaki sauce goes so well with pan-fried fish and it is really tasty. 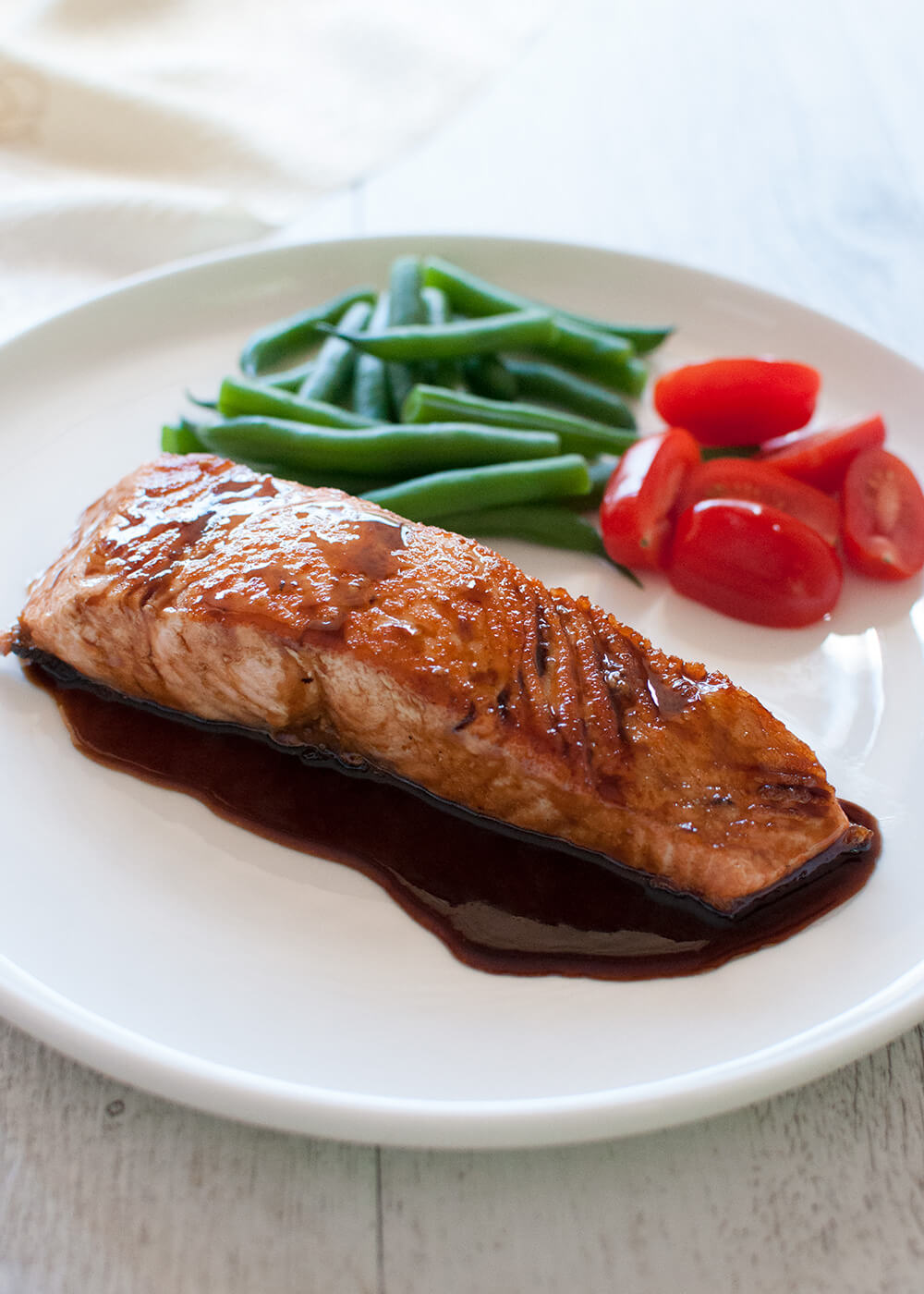 Teriyaki (照り焼き) is one of the typical cooking method of Japanese cuisine where meat or fish is cooked with soy-based sweet sauce. The word ‘teri’ (照り) means shiny or glossy and ‘yaki’ (焼き) means grill. Because of the sugar in the sauce, the surface of the meat/fish becomes glossy when coated with the sauce.

Sometimes the sauce is basted while the meat or fish is being cooked, but sometimes you simply add the sauce to the pan-fried meat/fish and cook further to condense the sauce. My recipe today used the second method.

There are different versions of teriyaki sauce recipes but in general, it is a mixture of soy sauce, sake, mirin and/or sugar. If you are using the basting method, the sauce should be condensed to become thicker so that the sauce will stick to the fish/meat easily.

The proportion of sauce ingredients are easy to remember – equal portions of soy sauce, sake, mirin plus some sugar. The amount of sugar can be anywhere between half a portion to zero. Today, I did not use sugar at all because mirin gives a sufficient amount of sweetness. Unlike teriyaki chicken, I like the fish to be cooked less sweet. But if you have a sweet tooth, feel free to add some sugar. 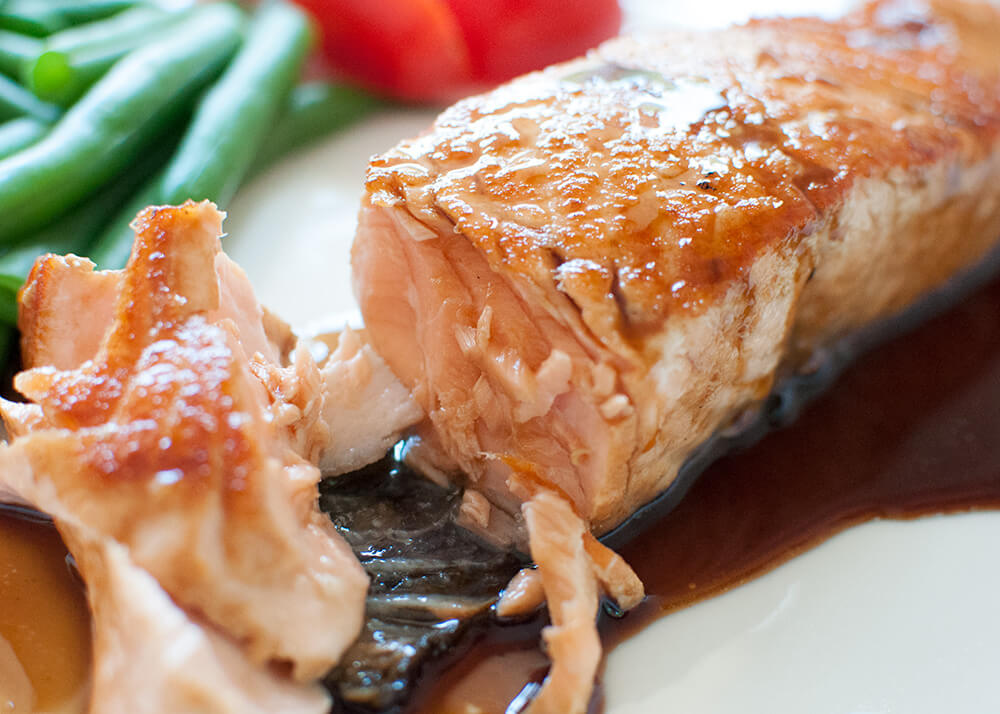 Among the many kinds of fish cooked in teriyaki sauce, teriyaki salmon is probably the most popular in Japan. It is called ‘sake no teriyaki’ (鮭の照り焼き). The word ‘sake’ has the same Romaji spelling as drinking sake but the kanji character is different – the kanji character for sake as fish is 鮭, sake as alcohol is 酒. It is very difficult to explain here but the stress in syllables is different between the two to distinguish two different words with the same spelling. Fish ‘sake’ has the stress on ‘sa’ while drinking sake has no stress.

If you make teriyaki with a kingfish fillet, it becomes ‘buri no teriyaki’ (鰤の照り焼き) because kingfish is ‘buri’ (鰤) in Japanese. Other fish fillets usually used for teriyaki are sword fish and Spanish mackerel. As you can see, they have oily and firm flesh, which is best suited for teriyaki fish.

I used salmon fillet but you can use fish cutlet (steak) instead. In the case of a fillet, try to buy a piece that has even thickness and avoid the belly part as it is extremely thin. Then, you will be able to cook the fish evenly. 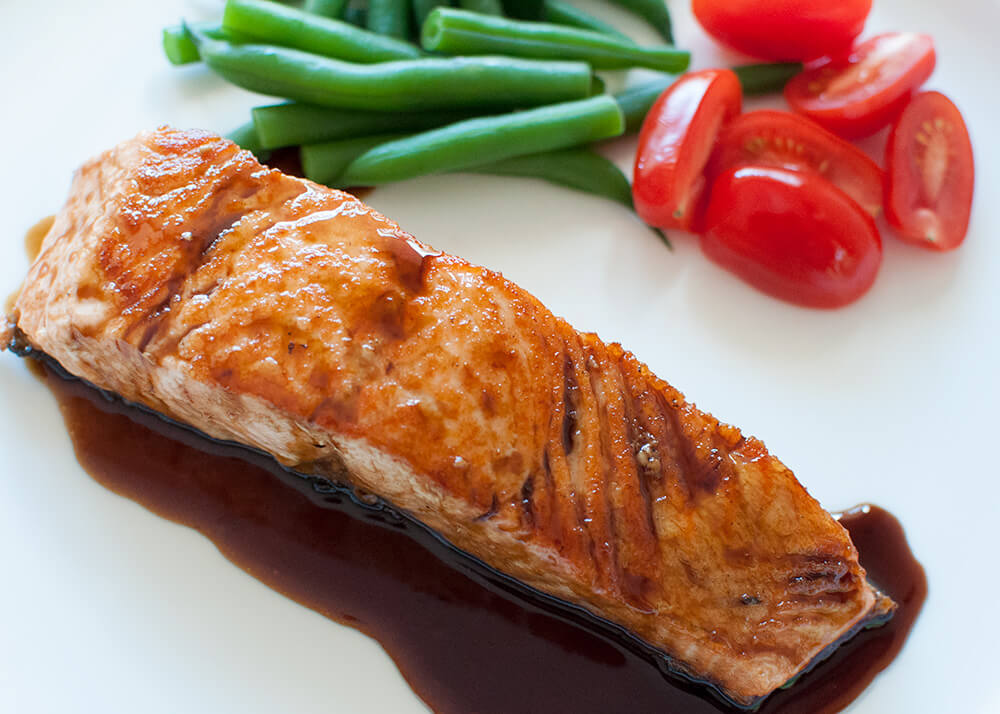 This is another very quick dish to make. It takes just over 10 minutes in total including preparation. The sauce is very tasty and goes so well with boiled rice or potatoes (mashed or boiled). 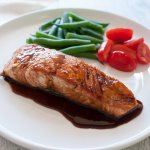 Just like my teriyaki chicken, teriyaki salmon is another popular home cooking dish in Japan. It is so quick and easy to make. The teriyaki sauce goes so well with pan-fried fish and is really tasty.

1. I used salmon fillets. The middle part of the fillet was about 2cm (3/4")thick. You can use salmon cutlets (steaks) instead.

Please visit my post, Japanese Salmon Mirin-zuke if you would like to remove the backbone from a salmon cutlet (steak).

2. If you have a sweet tooth, you can add up to 1 tablespoon of sugar.

3. Turn off the heat slightly earlier than the quantity you want as the heat of the pan will continue to condense the sauce.