This is a Japanese version of Egg Drop Soup called Kakitama-jiru. Kakitama-jiru broth is based on dashi stock, but Chinese egg drop soup is made with chicken stock. Fluffy eggs in the soup look almost like ribbons. 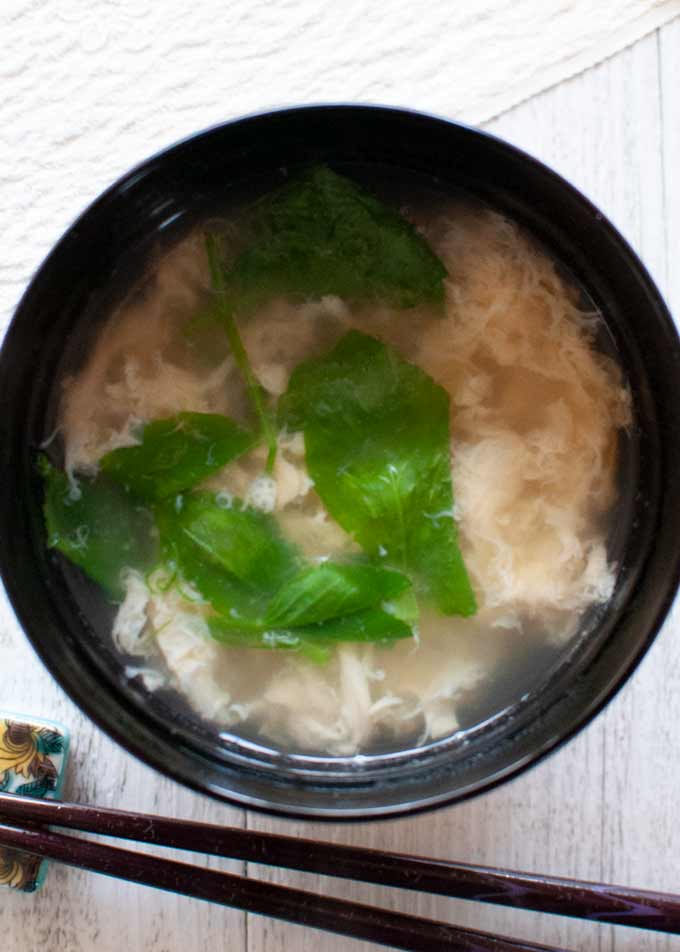 Stir is ‘kakimazeru’ (かき混ぜる) and egg is ‘tamago (たまごor 卵)  in Japanese and the first two syllables of each word were taken to make up ‘kakitama’ (かきたま). ‘Jiru’ (汁) means soup or broth.

The broth is made of dashi stock with a small amount of light soy sauce and salt.

Some recipes also add a small amount of sake to it. But if you make dashi stock from scratch as per my post, Home Style Japanese Dashi Stock, I don’t think you need to add sake at all. 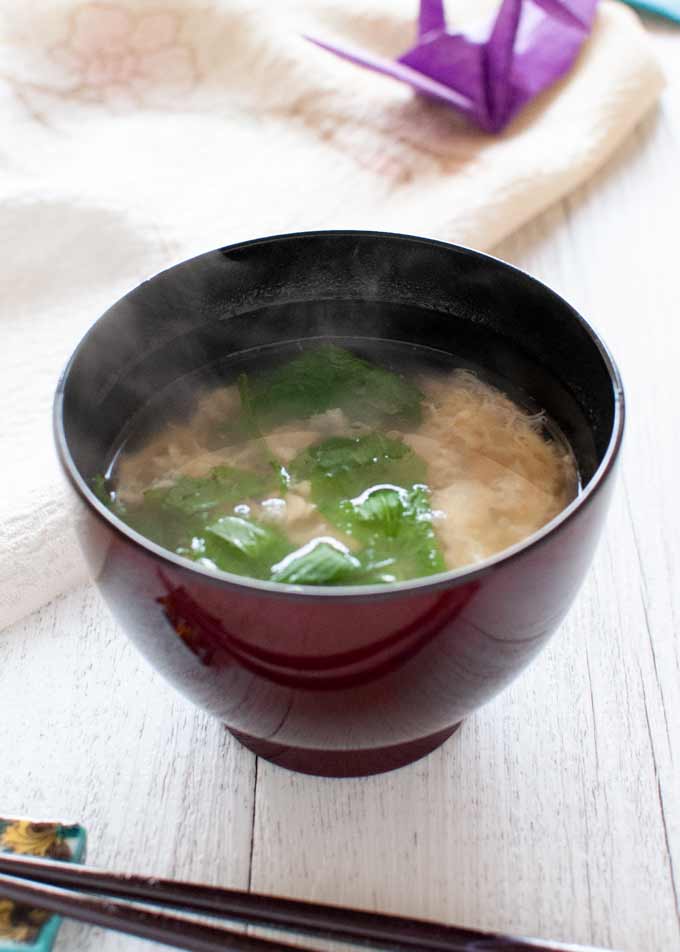 It is a clear soup with a slight saltiness and it’s full of dashi flavour. The broth is also slightly thickened with cornflour/corn-starch. Thickening the broth has two purposes:

Other than the broth, you only need egg and some greens as garnish.

This is a very simple soup to make that takes only 5 minutes or so to cook. However, the simple things are often difficult to master to perfection and this soup is just like that. The perfect Kakitama-jiru should have ribbon-like eggs and the soup should be clear. 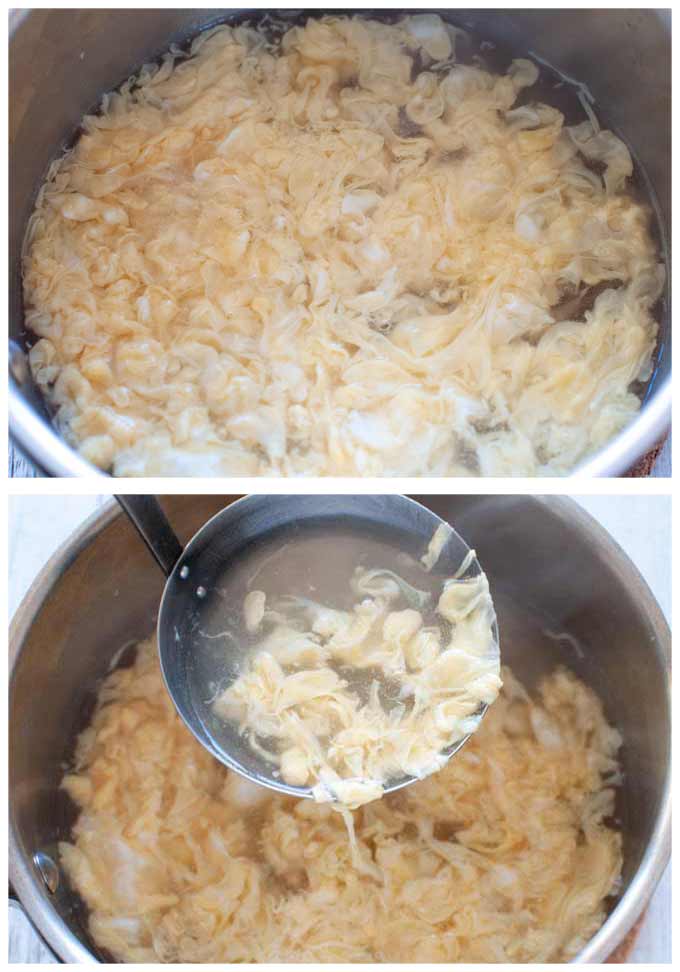 I said earlier that the Japanese name of this dish, Kaikitama-jiru came from how you stir the egg into the broth. Interestingly, you will learn how not to ‘stir’ the eggs and keep the soup clear from the tips below.

Kakitama-jiru is tasty with just fluffy eggs in delicately flavoured broth. But if you add some green leaves to it, it becomes pretty and more appetizing. 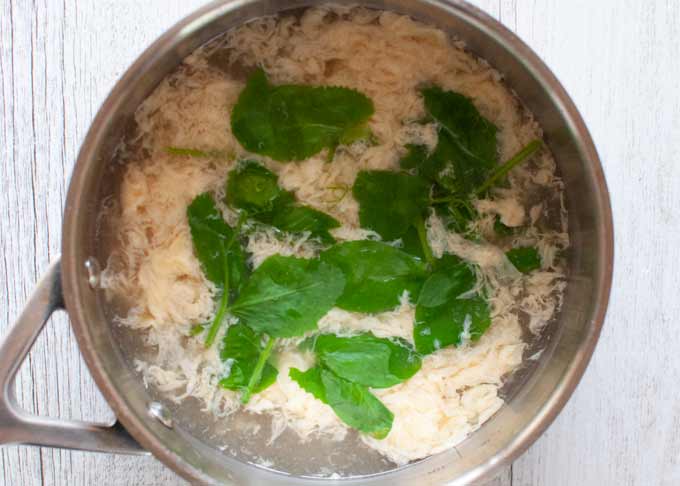 The most commonly used green leaf for Kakitama-jiru in Japan is mitsuba (三つ葉, a wild Japanese parsley or the Japanese version of Cryptotaenia), which is a Japanese herb that looks like large flat leaf parsley and has a distinct flavour unlike any other herb.

It is not easy to find mitsuba here in Sydney so I often substitute it with snow pea shoots, mizuna, finely chopped shallots/scallions or baby spinach. Today, I used snow pea shoots.

The green leaves should be cut to about 2.5cm/1” long except shallots/scallions that should be finely chopped. You only need a small amount.

Instead of green leaves, some recipes add wakame seaweed or thinly sliced shiitake mushrooms to it. You can be creative and add other leaves or vegetables but make sure that they are not too thick or too large.

The recipe makes enough soup for two standard Japanese soup bowls. But you could double the quantity and serve like a Western-style soup (photo below). 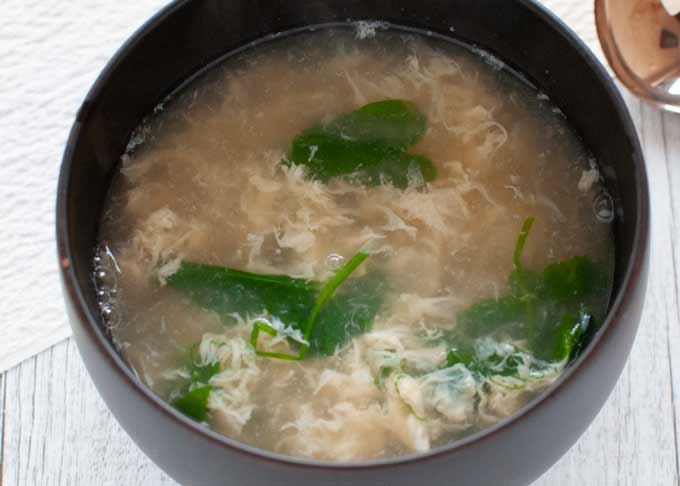 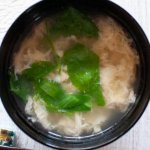 This is a Japanese version of Egg Drop Soup called Kakitama-jiru. Kakitama-jiru broth is based on dashi stock, but Chinese egg drop soup is made with chicken stock. Fluffy eggs in the soup look almost like ribbons. It also reheats well.

Cook Time does not include the time to make dashi stock.

1. I strongly recommend home-made dashi stock if you have time and access to dried bonito flakes. The broth is seasoned very lightly and you are meant to enjoy the great flavour of dashi.

Dark soy sauce is not suited for this recipe.

3. The amount of cornflour/corn-starch can be anywhere between 2 to 4 teaspoons depending on how thin/thick broth you want.

4. I picked only the tip of the snow pea leaves to avoid thick stems.

The most commonly used garnish in Japan is mitsuba - a wild Japanese parsley or the Japanese version of Cryptotaenia. You can also use mizuna, baby spinach or finely chopped shallots/scallions.

This is for a garnish and you don’t have to have it, although the green makes the soup look prettier.

5. If you have a ladle with small holes, you could pour the egg through it instead of using chopsticks/fork.

6. When transferring the soup from the pot to a serving bowl, gently scoop the soup and try not to break eggs into smaller pieces.

7. The serving size is the size of a typical Japanese soup bowl. If you would like the soup to be served like a Western-style soup in a larger soup bowl, you will need to double the quantity.