Today’s dish, Konbu Cha Pickled Vegetables is super easy and quick to make. You only need to pickle the vegetables for 30 minutes and the preparation takes just 5 minutes. It is lightly salted and full of umami. 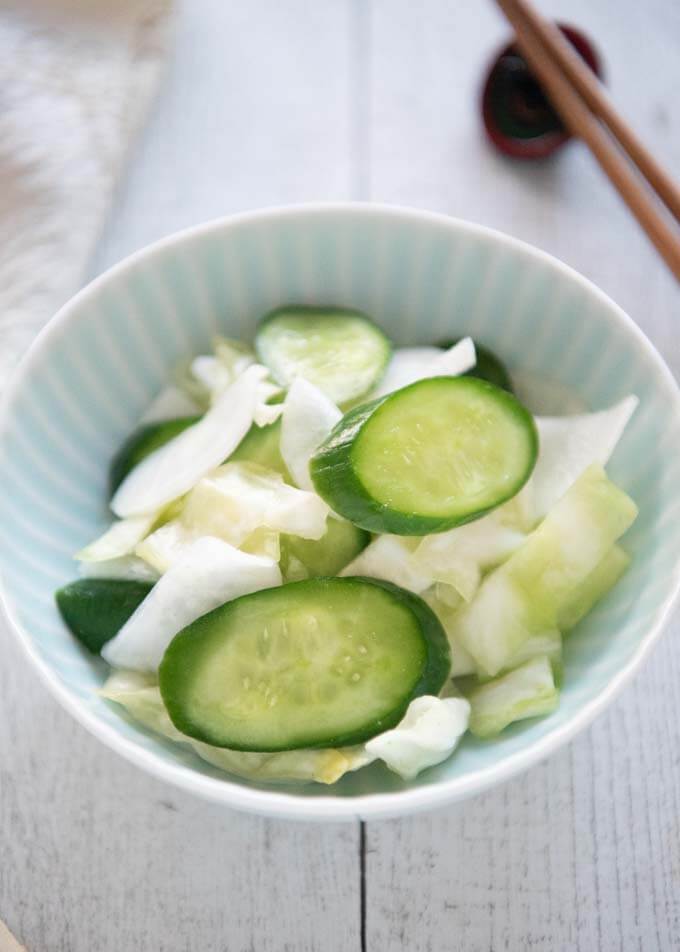 I have already posted a recipe, Simple Pickled Celery, which is also a very easy recipe using just salt to pickle. Today’s recipe uses Konbu Cha as a pickling agent.

These two words mean completely different things even if they sound exactly the same.

Konbu Cha refers to a kelp tea and Japanese people call it ‘konbucha’ (昆布茶) – well, the same as the English sound. The word ‘konbu’ (昆布) means kelp and ‘cha’ (茶) means tea. On the other hand, Kombucha is ‘kōcha kinoko’ (紅茶キノコ) in Japanese, which translates to tea mushroom.

Konbu Cha is a Japanese beverage, like green tea, which is made from powdered dried kelp. It often contains salt to give it more flavour and some of them might even contain tiny pieces of kelp or rice crackers. The delicious flavour of Konbu Cha comes from the umami and saltiness.

Konbu Cha already existed in the Edo period (1603-1863). At the time, it was made by adding boiling water to a tea cup with finely chopped konbu in it. After drinking the konbu-flavoured water, the konbu pieces were eaten.

The modern, powdered version of Konbu Cha has over 100 years of history. It appeared in 1918 during the Taisho period. The founder of the Japanese tea company, Gyokuroen, invented it. He looked at the traditional way of drinking Konbu Cha and thought that it could be consumed by more people (just like tea and coffee) if it was easier to make. It was a sensational idea to simply add boiling water to powdered kelp.

Since Konbu Cha contains powdered kelp, which is full of umami, Japanese people sometimes use it as a seasoning in cooking.

You can buy Konbu Cha at Japanese grocery stores or online shops such as eBay and Amazon. Many different brands of Konbu Cha are available and some of them even have dried umeboshi pieces added to them. I like both the plain version and the sour version with umeboshi. 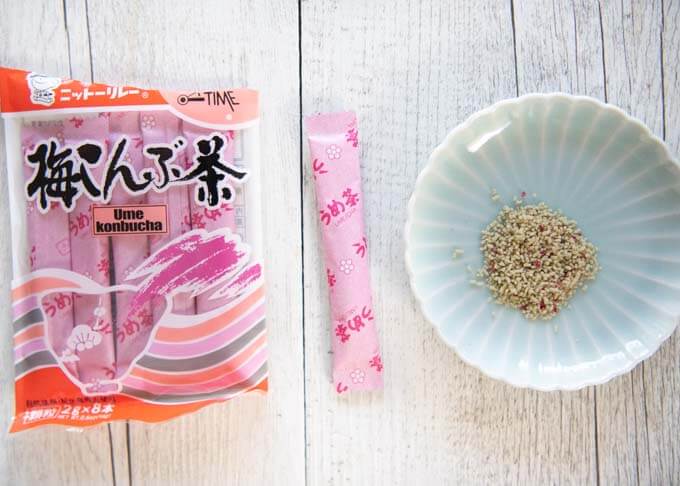 Kombucha is a fermented brown tea made from bacteria and yeast. In the process of brewing kombucha, you get a gelatinous substance that looks like a mushroom. Hence ‘tea mushroom’.

Why ‘mushroom’ became ‘kombu’ is the sixty-four-dollar question, but one theory is that the gelatinous substance looks like seaweed.

These days, different types of kombucha with added flavours are sold everywhere and many people drink kombucha tea for its health benefits. I don’t drink it. I tasted it some time ago and decided that it wasn’t for me.

So, I am not using a fermented tea – kombucha – but I am using powdered kelp – Konbu Cha in today’s recipe. 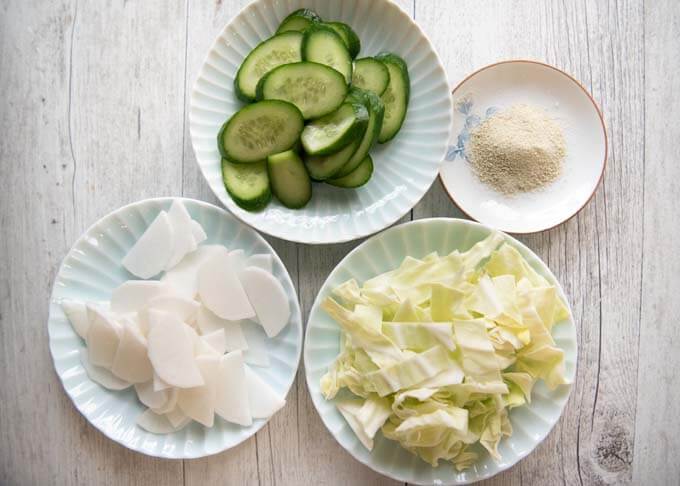 There is no limit to what kind of vegetables you can pickle, as long as they can be eaten fresh. If I had Chinese cabbage in my fridge, I would have used it too. Other popular vegetables include turnip, carrot, and celery.

Check the nutrition information on the back of the pack/container of Konbu Cha and see the amount of sodium (unless it provides the amount of salt) included in a sachet. Then convert it to the equivalent amount of salt. Here is the formula for conversion.

Then you can work out how many sachet or how many grams of Konbu Cha you will need. 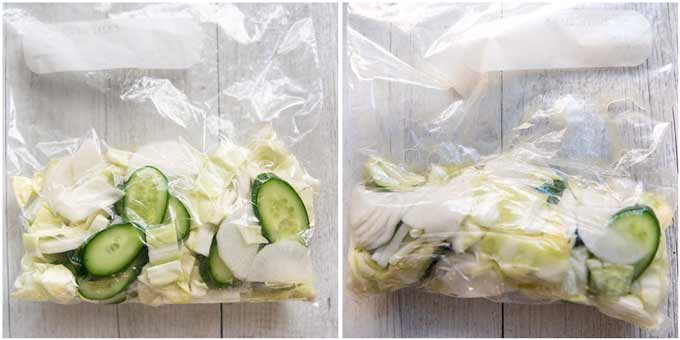 Before (left) and after (right) pickling.

There is one important thing to note here. When preparing the vegetables, you need to consider how fast each vegetable will be pickled. The speed of pickling usually depends on the amount of water contained in the vegetable and how you slice it.

This is because in the process of pickling with salt, the water within the vegetable is extracted. So, the more you expose the inside of the flesh, the easier the water comes out of the vegetables. In addition to this, the vegetables that contain more water are picked faster, e.g. daikon vs carrot.

With my vegetables, I sliced the cucumber diagonally to expose more of the flesh. The daikon was sliced slightly thinner than the cucumber. The cabbage was cut into smaller bite size pieces. You can see in the photo below how much water is extracted after pickling for just 30 minutes. 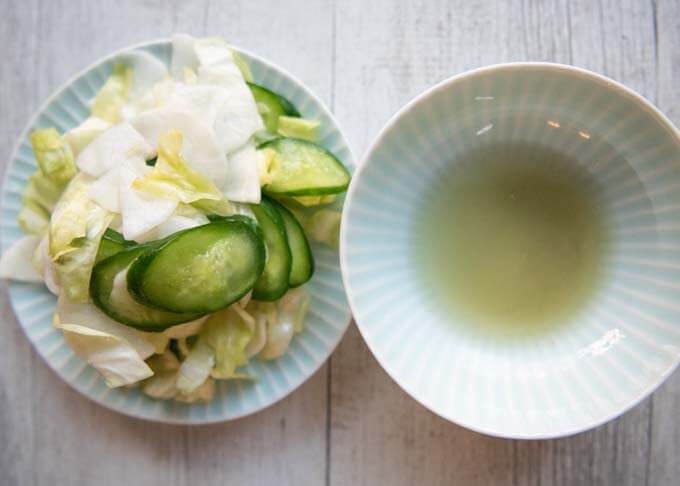 If I added carrot, I would have cut the carrot into match sticks since carrot does not contain as much water as daikon and cucumber.

As a variation, I also pickled just celery in Konbu Cha. I sliced my celery stick diagonally to expose the flesh as much as possible. Adding a tiny amount of chopped dried chilli gave it a touch of spiciness. 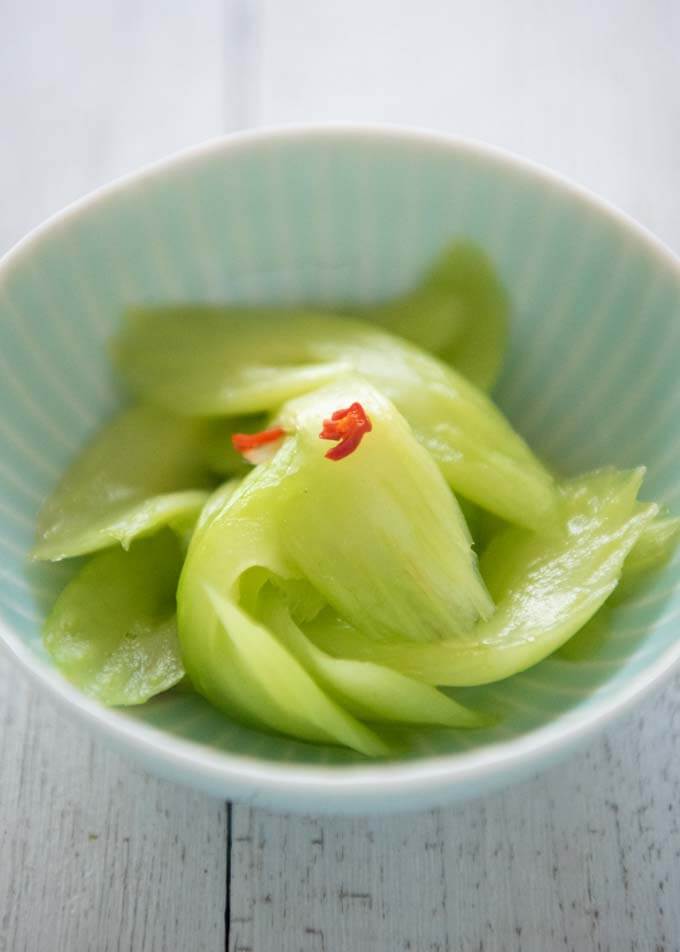 Konbu Cha is a tea. So even if you buy a pack and used only a small amount of it for Konbu Cha Pickled Vegetables, you won’t waste the rest of the Konbu Cha. Just drink it as a tea per the instruction on the packet.

The flavour of Konbu Cha Pickled Vegetables is so light that you can eat it as a salad. 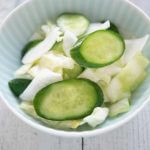 Konbu Cha Pickled Vegetables is super easy and quick. You only need to marinate half an hour. It is slightly salty and full of umami.

1. You can use different vegetables that can be eaten fresh. Other vegetables often used in this recipe are Chinese cabbage, carrot, celery.

2. Konbu Cha is a tea that is made of powdered dried kelp, often with some salt to give more flavour. See more details about Konbu Cha in the post. Use plain Konbu Cha with no additional flavours such as sour dried plum (umeboshi)

You may need to adjust the amount of Konbu Cha or supplement with salt if the saltiness of your Konbu Cha is quite different from mine.

Using the formula below, you can convert the salt-equivalent quantity from the sodium in the nutrition label on the back of the packet of the Konbu Cha.

Unlike other traditional Japanese pickles, Konbu Cha Pickled Vegetables is not too salty, nor sour. So, I decided to serve it as a salad in today’s Meal Ideas.

You can serve almost any main dishes to go with it, but I picked Sweet and Sour Pork as the main dish.

The side dish should have a different flavour from the main dish and the salad. Poached Chicken Tenderloin with Mustard Miso Dressing would be perfect to go with the other dishes. If you feel that there is too much protein all together, you can adjust the amount of the meatballs or the poached chicken. 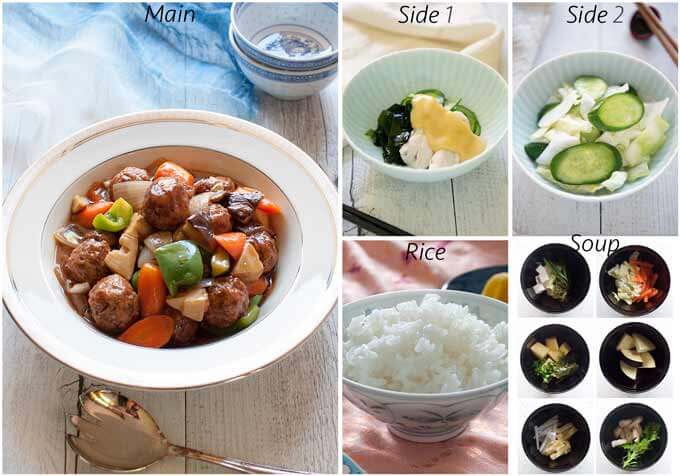