I am sharing two different recipes for Japanese Pickled Cucumbers today. One of them is a traditional pickle recipe, Salt Pickled Cucumbers. The other recipe uses shiro dashi and sesame oil to pickle cucumbers – the kind that you might see served at izakaya (Japanese-style taverns). 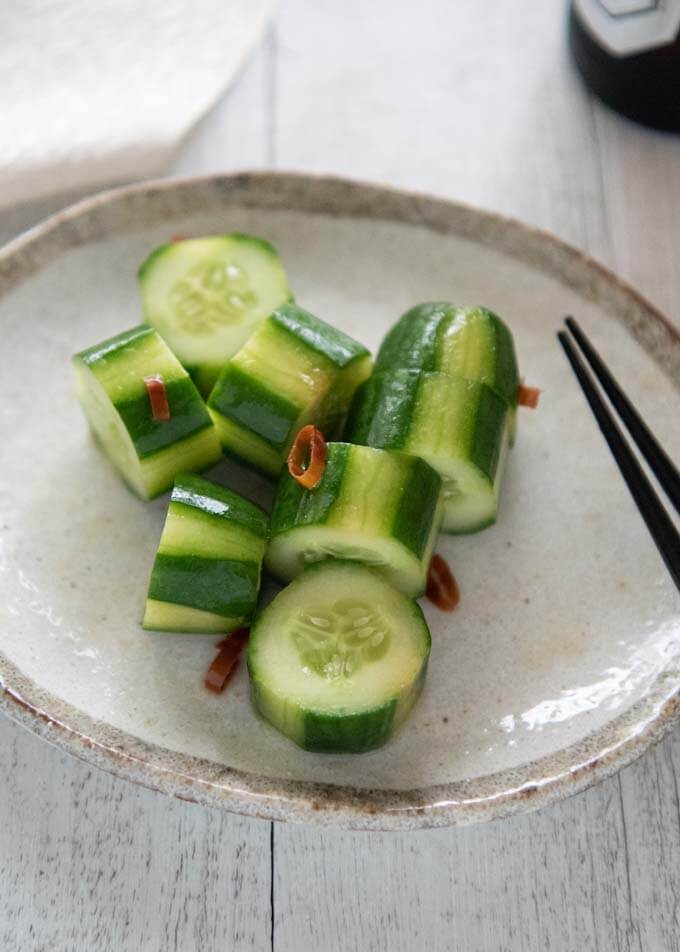 Both are very simple to make but you need to be patient and wait for a day or so before you can enjoy the flavoursome freshly pickled cucumbers.

When you Google search ‘pickled cucumbers’ in English, you will see many pictures of cucumbers pickled in jars. The pickling liquid is by far based on vinegar, with or without spices/herbs.

But in Japan, Google searching the same in Japanese returns many pictures of cucumbers pickled in salt. Salt pickling is the oldest and simplest method of ‘tsukemono’ (漬物, pickling). Even now, this method of pickling cucumbers is popular among Japanese households. This is one of my recipes today. 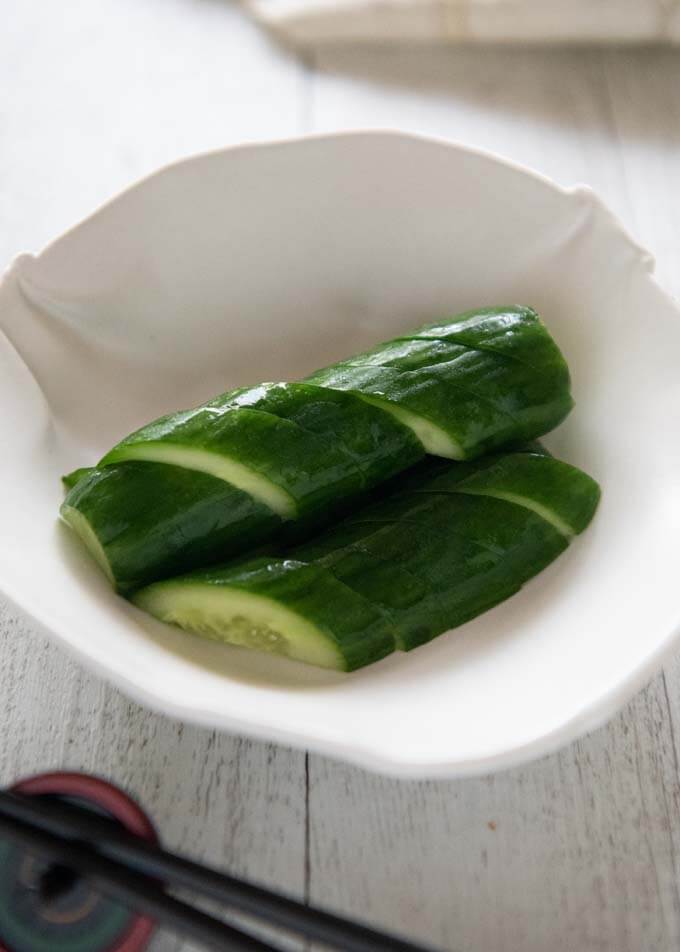 Many new ways of pickling vegetables were tried and become popular since then. However, my second recipe, Shiro Dashi Pickled Cucumbers is none of the above. For a pickling base, I used shiro dashi, which only started appearing in the market in 1978. 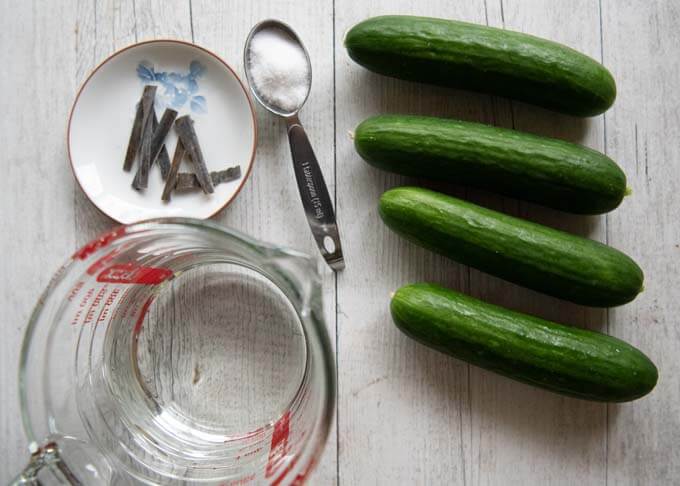 You don’t have to have konbu but it gives umami to the pickles. If you wish, you can also add sliced dried red chilies.

After you prepare the cucumbers using salt, place the whole cucumbers and the remaining ingredients in a zip lock bag and pickle for 1-2 days in the fridge. 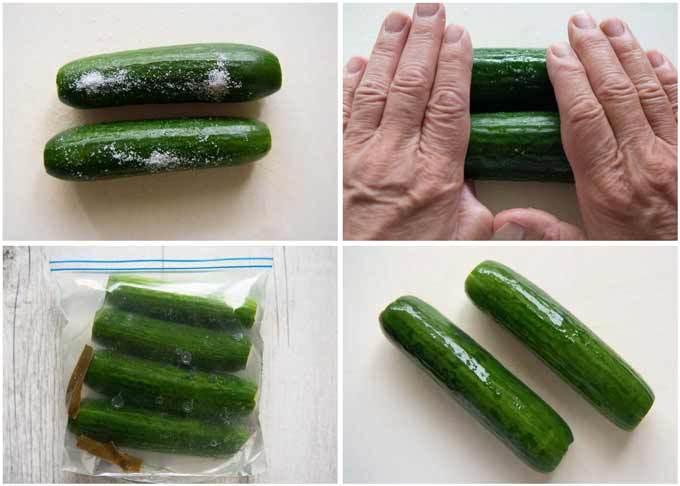 You need a few more pickling ingredients for Shiro Dashi Pickled Cucumbers but still only 4 items. You will need: 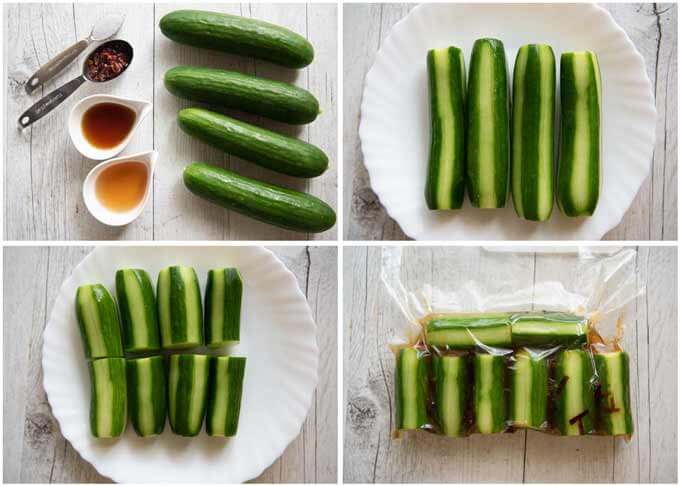 As you can see in my Shiro Dashi (Seasoned Dashi stock) Recipe, shiro dashi is made of typical Japanese seasonings with plenty of bonito flakes and konbu. Since it is a condensed, seasoned dashi stock, you will need only a small amount of it to pickle cucumbers.

The amount of salt used here is much less than for Salted Pickled Cucumbers. So, the cucumbers are prepared to allow for easier penetration of the pickling liquid into the flesh of the cucumbers. See the recipe card for details of how to prepare cucumbers for this pickling method.

Just like Salted Pickled Cucumbers, once the cucumbers are prepared, simply put the cucumbers and the rest of the ingredients in a zip lock bag and store it in the fridge.

You can eat the Shiro Dashi Pickled Cucumbers after 3-4 hours of pickling. But if you leave them at least overnight upto 24 hours, it will make the flavour of the cucumbers stronger. 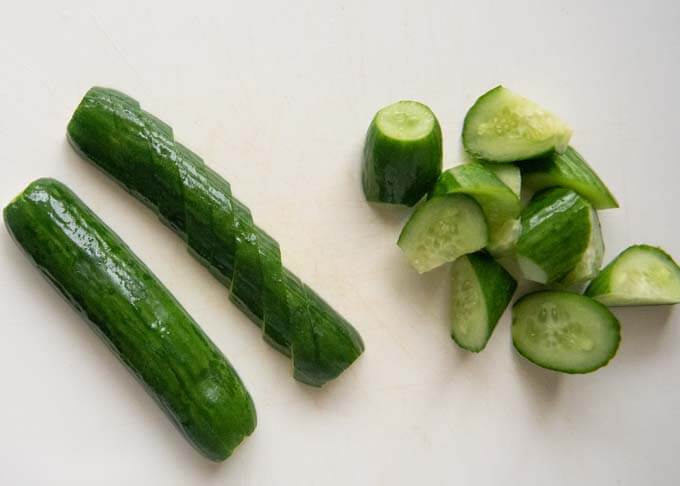 Salted Pickled Cucumbers are typically served by slicing them diagonally into about 7mm-1cm thick pieces. This is the traditional way of serving pickled cucumbers. If the cucumber is a little bit fat, you should halve it vertically, then diagonally slice halves so that each slice is not too large to eat.

You can also serve it by applying the roll cutting (rangiri) method. It gives a totally different appearance to the same dish. I think that this method is suitable when serving a mound of pickled cucumbers to nibble/share. 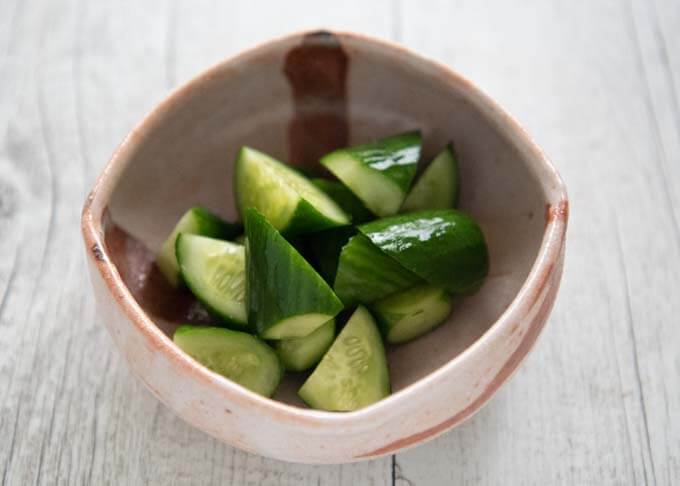 In the case of Shiro Dashi Pickled Cucumbers, you can serve it in a more dynamic way, in addition to the traditional serving methods above.

Poke a wooden chopstick from one end of the cucumber and push it through the centre of the whole cucumber piece, so that the cucumber looks like an ice pop – cucumber pop! This is how some izakaya and festival stalls sell it. 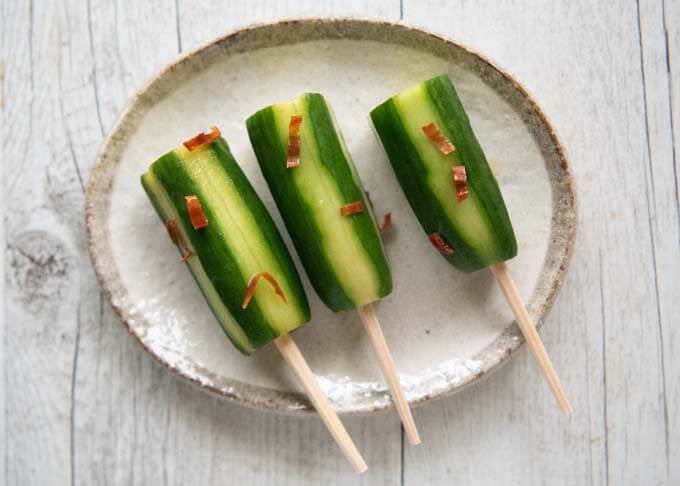 I cut the cucumbers in half for faster pickling in shiro dashi, but if you pickle whole cucumbers, you can make amazing cucumber pops that are fun and delicious to eat. 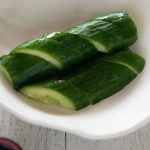 Salted Pickled Cucumbers are made with the simplest and oldest method of pickling. It is so simple that it takes a mere 5 minutes to pickle the cucumbers. But you need to leave the pickles for 1-2 days before enjoying them.

2. You can omit konbu if you don't have it. But konbu adds umami to the pickles.

3. This will bruise the cucumbers to allow for better penetration of the salt into the flesh.

4. Nutrition per serving as side. It assumes 60% of the salt is absorbed into the cucumbers. 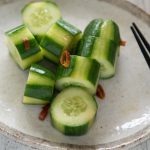 This is a delicious pickled dish with a great deal of umami added to the pickling liquid. The addition of sesame oil brings the flavour up to the next level.

Serve them by cutting them into bite-size pieces or serve a whole cucumber on a stick like an ice pop as served at izakaya and festival stalls (see the photo in post).

2. You can either use home-made shiro dashi or store-bought shiro dashi.

3. Two teaspoons of sliced chilies give a hint of spiciness to the marinated cucumbers. You can adjust the quantity to suit to your palate.

4. Nutrition per serving. It assumes that 60% of salt and sesame oil is consumed. 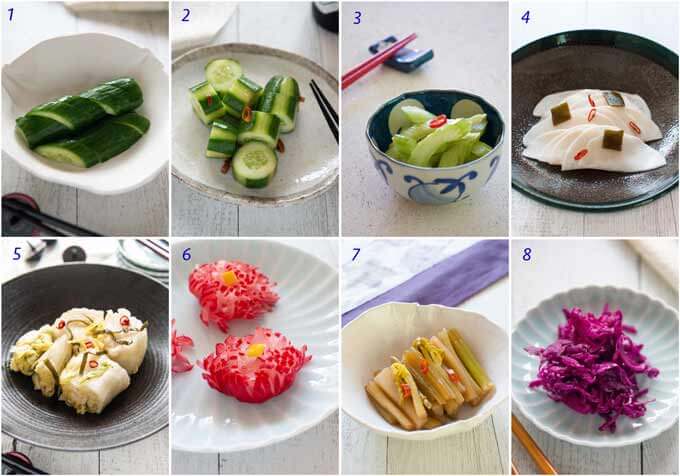