Bonito Kakuni (Simmered Bonito Cubes) is a diced bonito fillet cooked in sweet soy flavoured sauce with shredded ginger. It has a strong, sweet soy flavour and goes so well with rice.  It is also great as nibbles for drinking sake and beers. Bonito Kakuni is very easy to make and keeps well in the fridge and freezer. 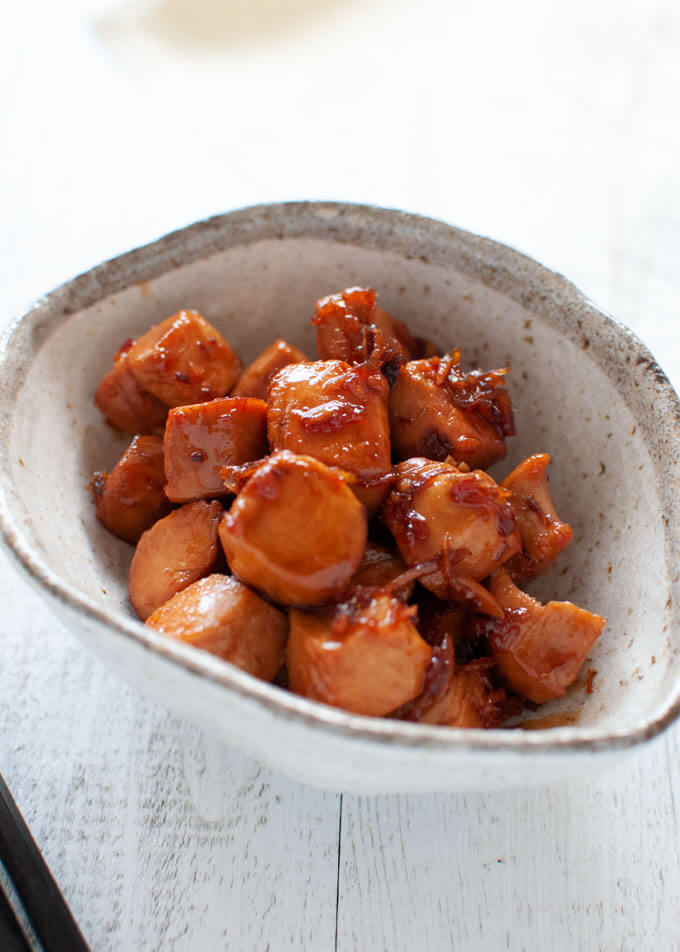 It is said in Japan that bonito caught in spring, which is called ‘hatsugatsuo’ (初鰹), has the best taste. The word hatsugatsuo means season’s first bonito. Because hatsugatsuo is associated with spring, this word is even used in Haiku (俳句, Japanese short poetry).

A Haiku traditionally contains a word or a phrase that symbolises a season and hatsigatsuo is listed as the word for spring. The most famous Haiku using this word is here.

It says that we can see a lot of green leaves (青葉) outside, lesser cuckoo (ほととぎす) chirps in mountains and bonito is in season (初鰹).

This poem is written by Sodō Yamaguchi in the Edo period. Sodō composed a list of things that the Edo people favoured in spring to early summer. Apparently since then, eating hatsugatsuo in this season became chic and trendy among the people in Edo. 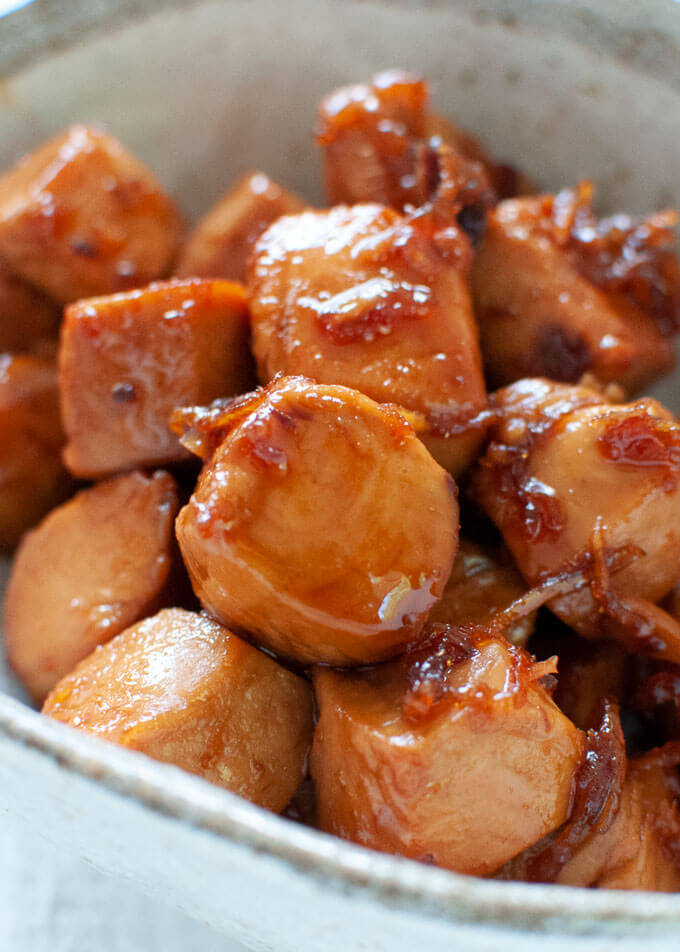 If you Google search images of ‘kakuni’, it displays images of pork kakuni just like the photo in my recipe Pork Kakuni (Japanese Simmered Pork Belly). Wikipedia also says that kakuni is a Japanese pork dish. It is not wrong but not 100% right either.

Kakuni is a simmered dish with cubed meat or fish. The word ‘kaku‘ (角) in this context means diced or cubed and ‘ni‘ (煮) means simmered.

Because the word kakuni became a synonym for pork kakuni, it is better to use the ingredient name in other meat/fish kakuni. Hence, it’s Bonito Kakuni (Simmered Bonito Cubes).  If you substitute bonito with tuna, you call it tuna kakuni. 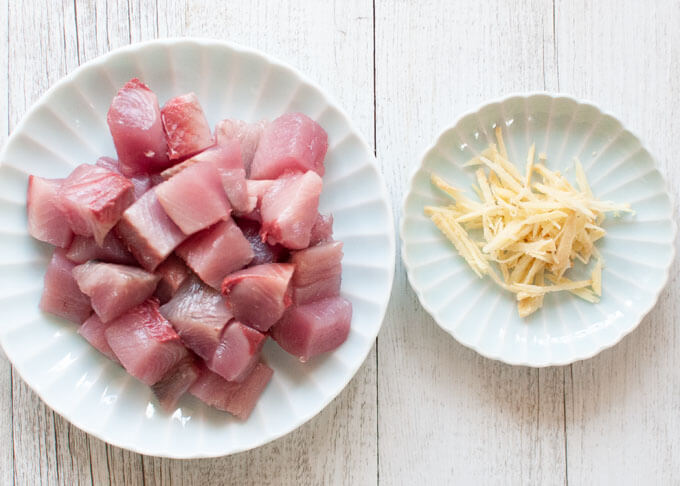 It only consists of bonito, julienned ginger and typical Japanese seasonings:

If you are not familiar with bonito, please visit my post Bonito Tataki (Seard Bonito).

Other fish fillets usually used to make kakuni like this are tuna and king fish. The bonito flesh is close to mackerel but I think that mackerel flesh is too soft for this dish.

The amount of sweetness can be adjusted to suit to your palate. I would not reduce the quantity of mirin. Reduce the sugar if you prefer the sauce to be less sweet.

How to Make Bonito Kakuni

Bonito flesh is reddish like mackerel, which has a stronger fish smell than the white flesh fish such as snapper.

To remove the fishy smell from the flesh, the cubed meat needs to be blanched quickly. You only need to boil them a minute or so until the surface of the fish pieces becomes completely white.

Drain and cook them in the seasoned sauce with ginger. 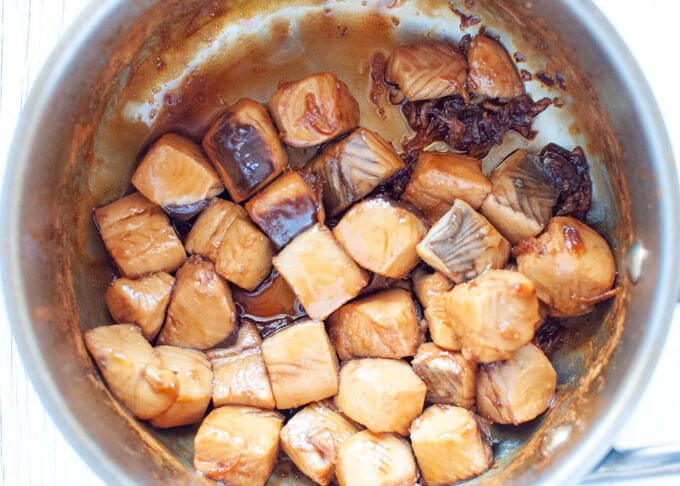 The fish cubes are cooked through very quickly as the size of the cubes is small. But you need to cook them for 10-15 minutes over medium heat until the liquid almost evaporates.

Make sure you roll the diced fish pieces in the sauce so that the sauce coats all sides of the cubes. You can shake the pan to do that or use a spatula to gently turn the cubes over.

As the liquid condenses, you will see the surface of the bonito cubes becomes shiny, which looks so appetising!

Bonito Kakuni keeps a long time in the fridge – about 1 week. It is also good to freeze it.

Because of the sweet soy flavour coated around the bonito cubes, it goes so well with rice. But it is also wonderful as nibbles with drinks such as sake, shōchū (distilled Japanese spirit) and beer, in my view. 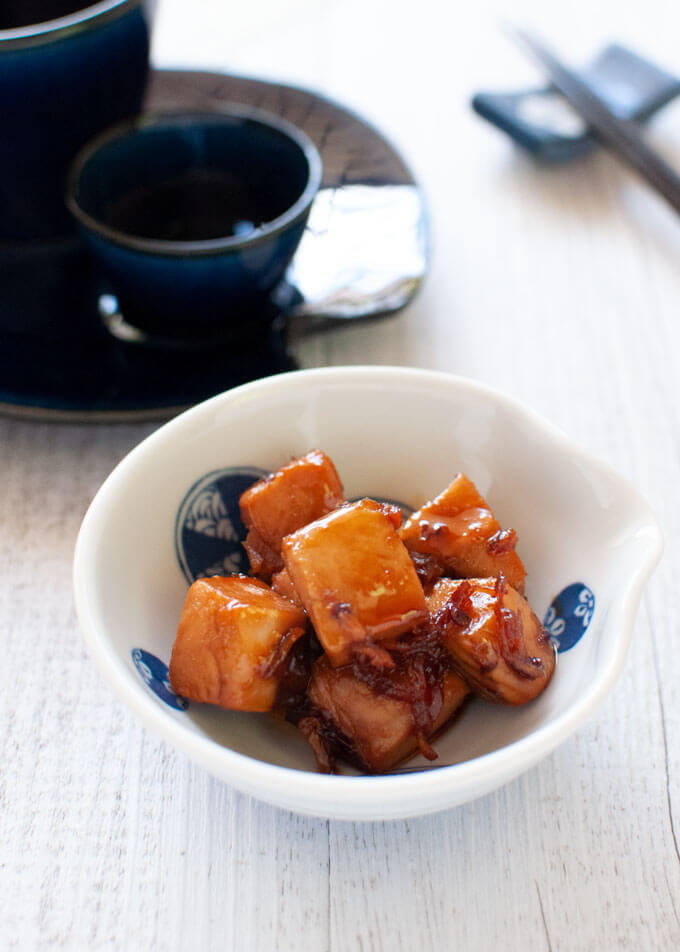 As a pre-cooked non-perishable dish, Bonito Kakuni is also perfect to put in a bento box. 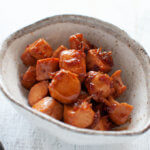 Bonito Kakuni (Simmered Diced Bonito) is a diced bonito fillet cooked in sweet soy-flavoured sauce with shredded ginger. It goes so well with rice. Bonito Kakuni is also a great as nibbles to go with sake, beer and other non-sweet drinks. It is very easy to make and keeps well in the fridge.

1. Bonito is a seasonal fish and you may not find it at fish shops all year round. If you can’t find bonito, you can substitute it with tuna or king fish.

2. You can keep Bonito Kakuni in the fridge for about a week. It is also OK to freeze it.

3. Nutrition per serving as a side. Sodium is high as it is assumed that all of the sauce is consumed.

Bonito Kakuni has a strong sweet soy flavour so I picked the other dishes that have a quite different flavour bases – the Main with sour flavour, the Side dishes with sweet flavour, and mayonnaise flavour.

Pairing Bonito Kakuni with Zaru Soba is also perfect as the soba noodles have neutral flavours. 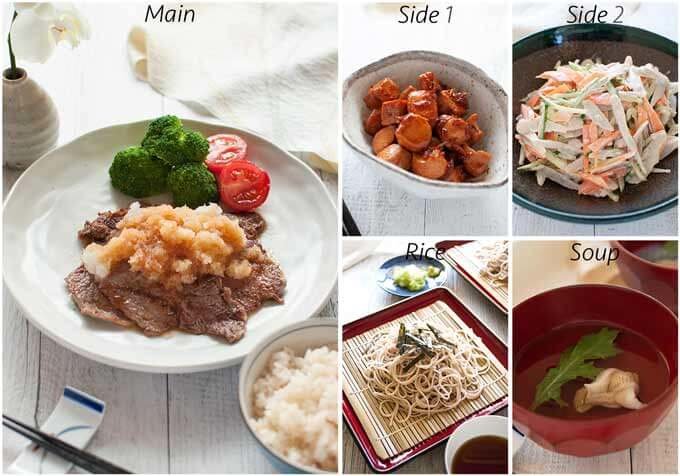