If you love pork, you must try this kakuni (角煮, simmered pork belly). The pork is cooked slowly so it is tender and it has a lovely sweet soy sauce flavour, but it does not over power the flavour of pork. Though it requires patience to cook slowly, this is very easy to make. 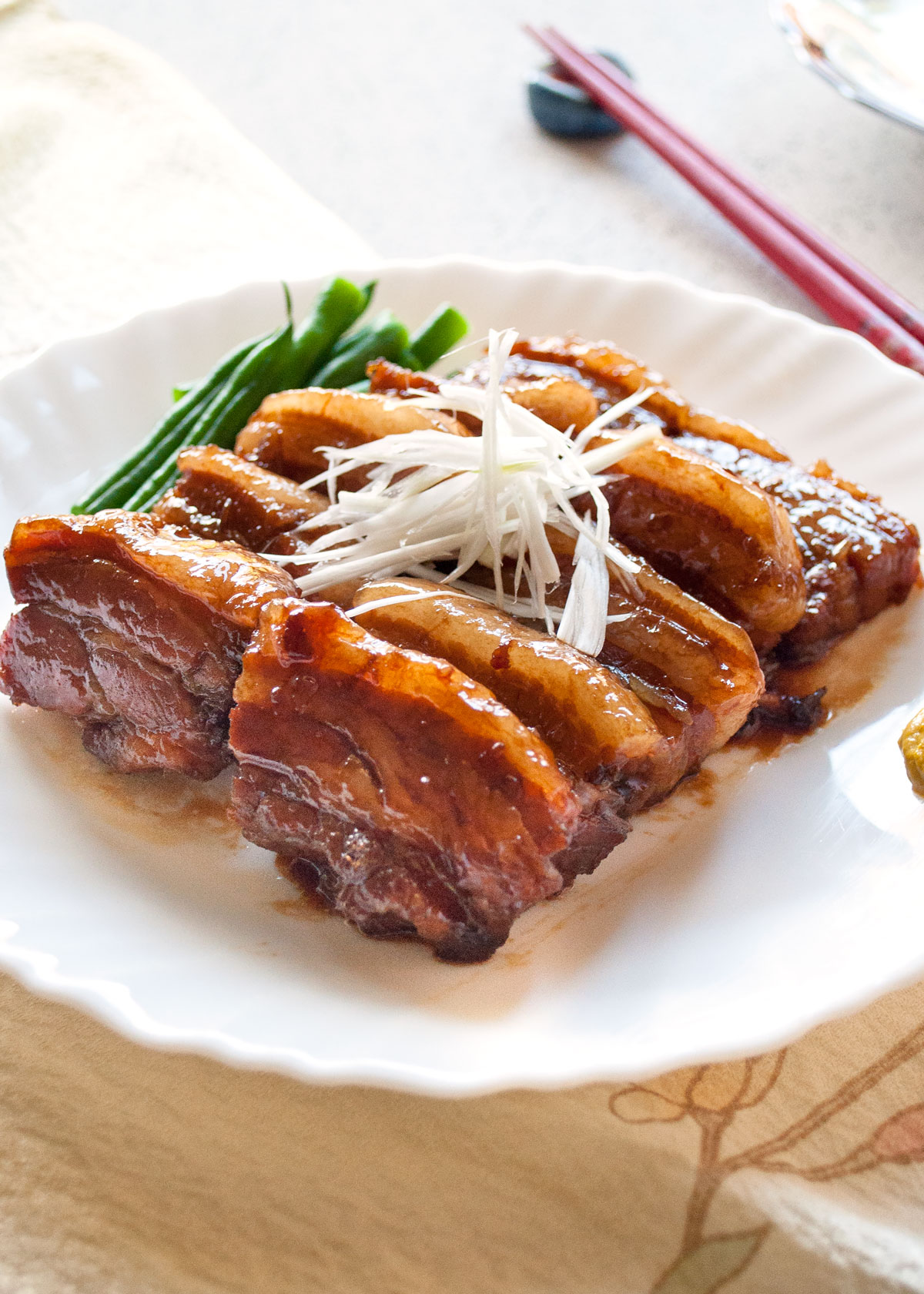 Some say that kakuni came from China during the time when Japan was closed to most of the outside world. At the time, the only port city where foreign ships had access to was Nagasaki and the Chinese dish called Dongpo Pork was introduced to Nagasaki. Over the years, it was modified to the Japanese palette and evolved to became kakuni.

Pork belly has a lot of fat but that’s where all the flavour is. However, by cooking the pork belly for a long time, much of the fat melts away and the fat that remains is really tender so the finished dish does not taste fatty. 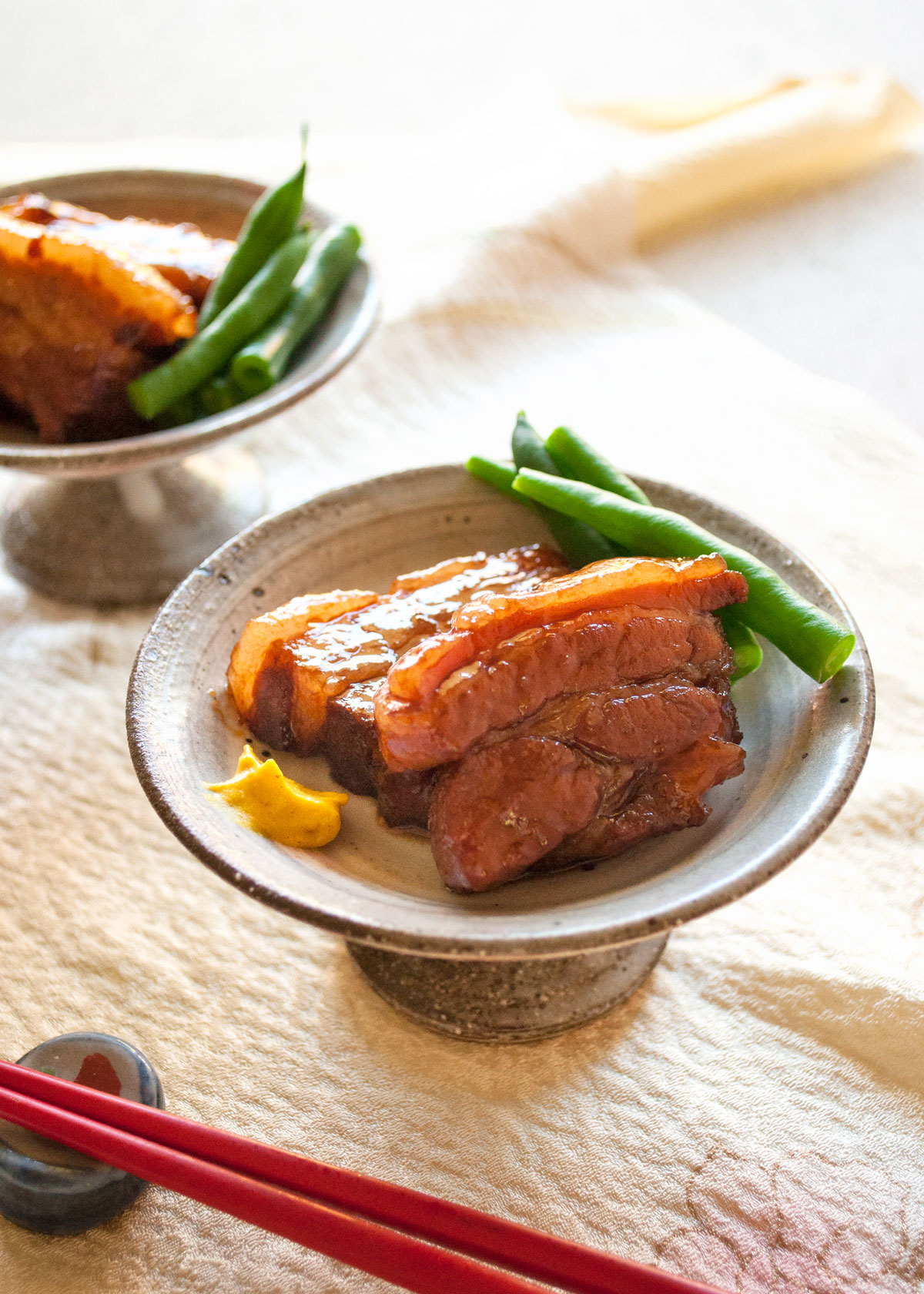 Kakuni is simple to make with only common Japanese seasonings. Time is the only restricting factor if you are in a hurry because it will take almost 3 hours to cook in a normal pot. But if you use a pressure cooker, you can shorten the cooking time significantly.

Some kakuni recipes brown the meat cubes in a fry pan first before simmering them in the braising liquid. But I don’t, probably because I used to mostly cook kakuni in a pressure cooker where I threw everything in a pot and just cooked after quickly blanching the meat.

Some recipes have boiled eggs added into the braising liquid towards the end. The surface of the egg gets stained brown and looks quite dramatic when served cut in half – imagine the yellow yolk and the egg whites outlined in brown. To come to think of it, I don’t think I have ever served eggs with kakuni which is surprising given that my youngest daughter loves eggs and asks for eggs to be added to everything! 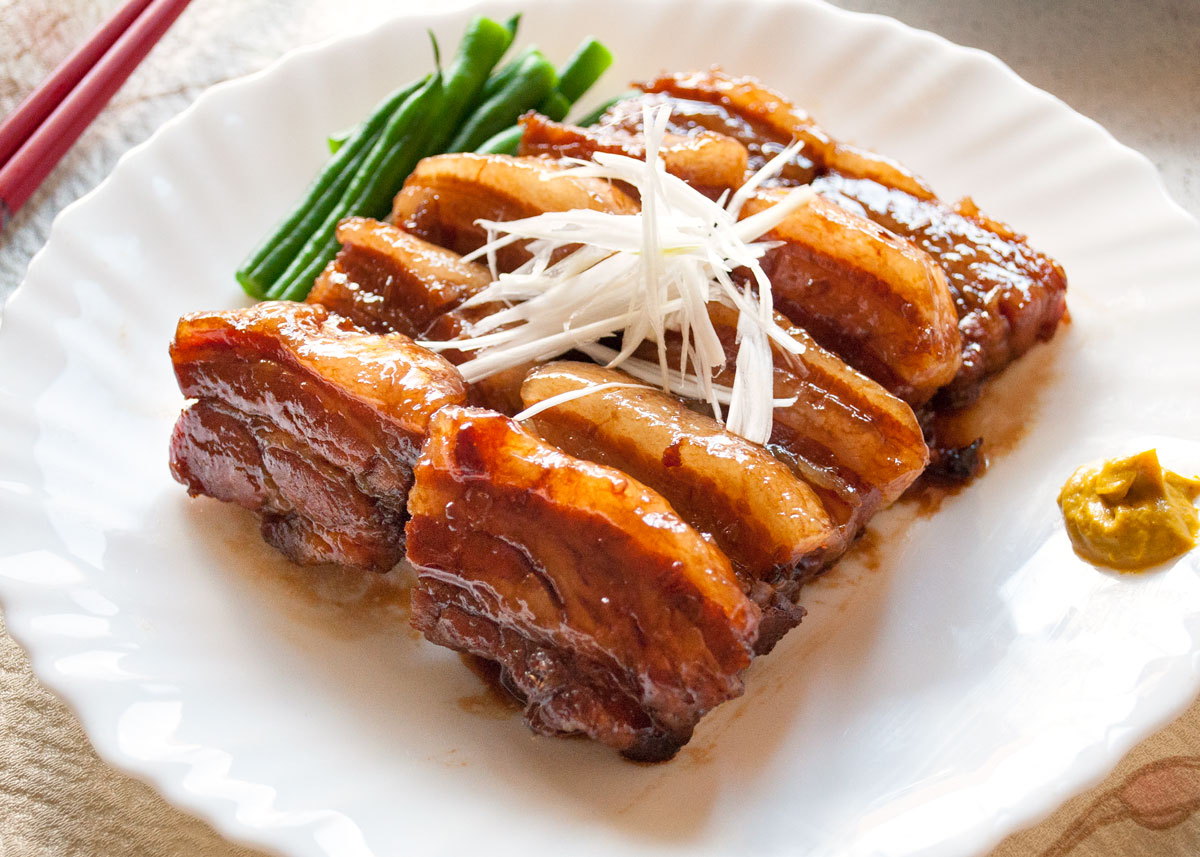 It is traditional to serve kakuni with a drop of Japanese mustard called karashi (辛子 or からし). Karashi is a bit darker yellow than most other mustard. It does not have acidity in it and very hot. It is perhaps closest to hot English mustard.

You can buy karashi at Japanese/Asian grocery stores. They come either as paste in a tube or powder in a small tin. The tube version seems to be more widely available. Karashi in a tube looks like this. 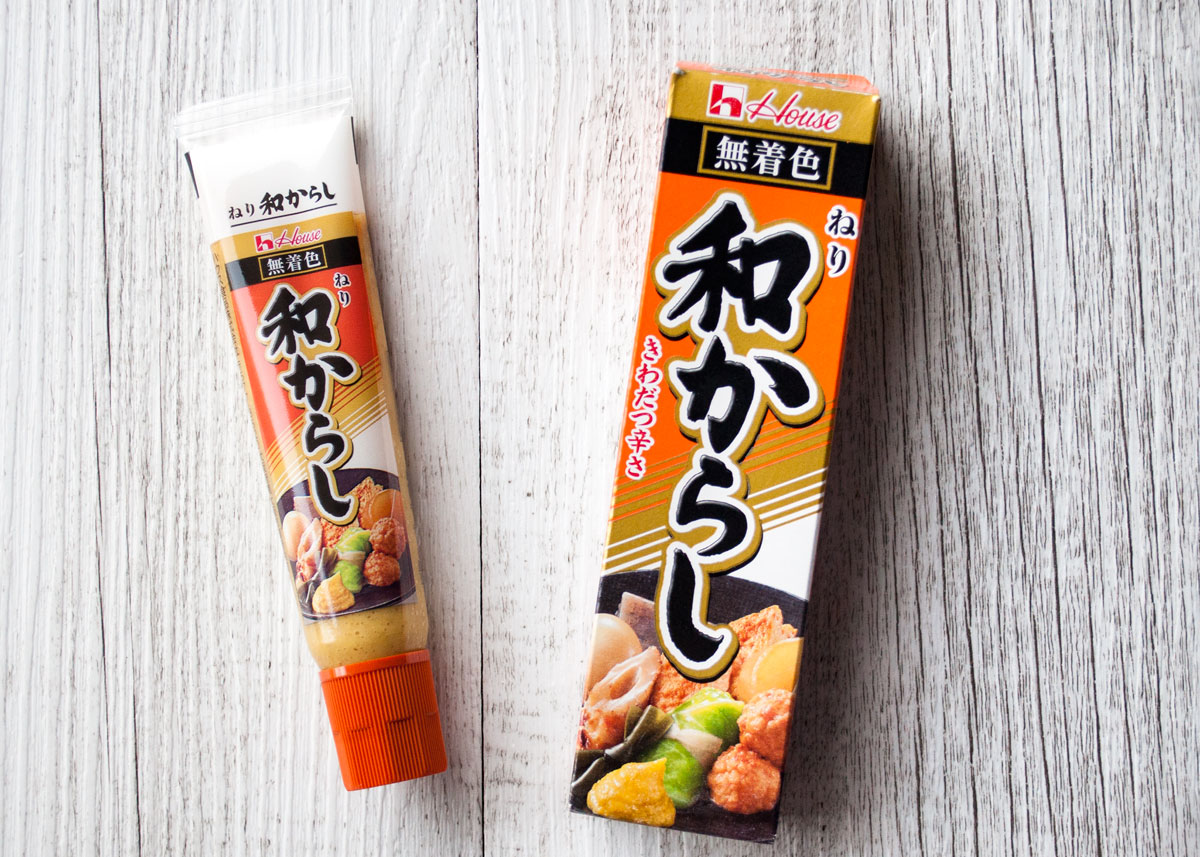 If you happen to get karashi in powder form, you just mix the powder with warm water in a little bowl to make a paste, then cover and leave it for a while to develop spiciness.

I ran out of karashi so I used hot English mustard this time and it was OK. American mustard does not go as well due to strong acidity.

Unlike most of my Japanese dishes, you might find that kakuni has rather strong soy sauce flavour. My son commented about it saying that the flavour is strong, unlike my usual dishes. But it has to be strong flavoured, otherwise it won’t be kakuni. If your palette is on a sweet side, you could increase the amount of sugar by ½ tablespoon. 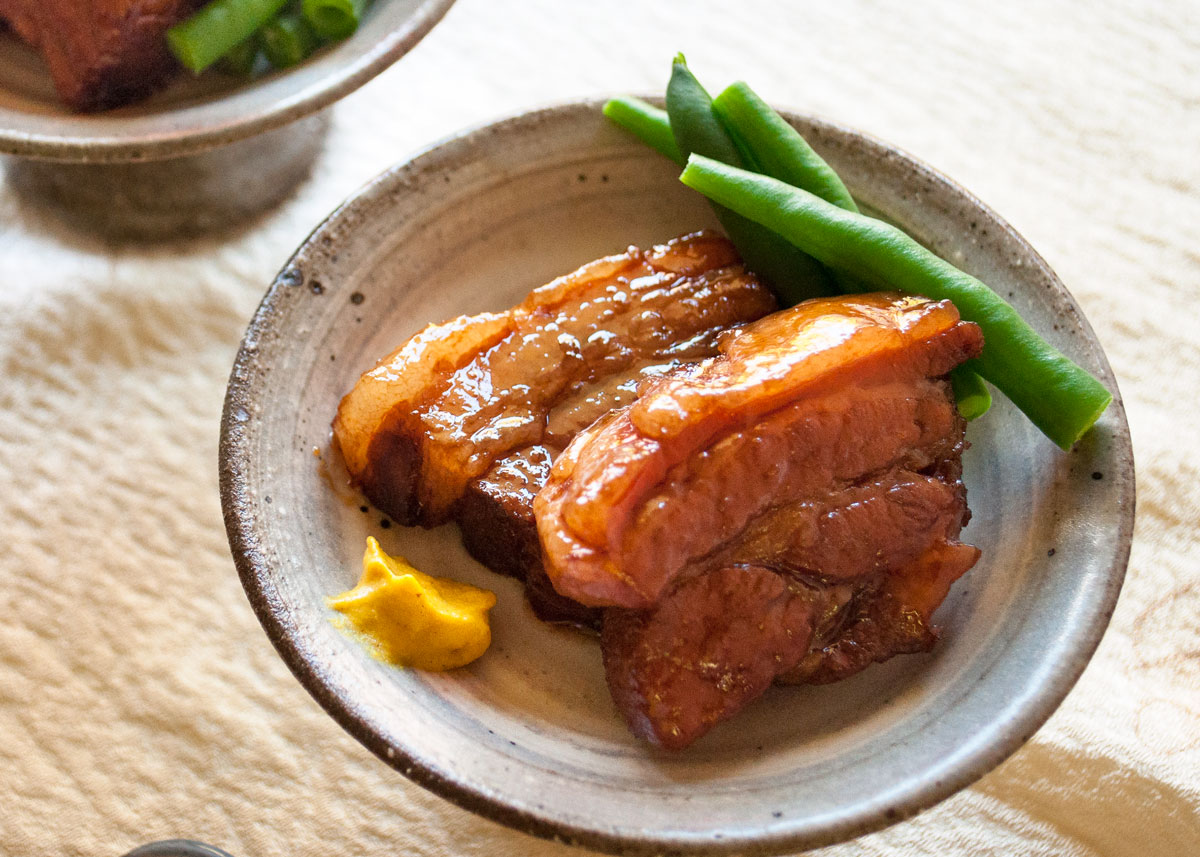 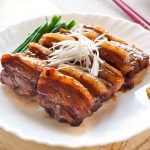 2. If you like sweeter flavour, you could increase the amount of sugar by ½ tablespoon.

3. Karashi is Japanese mustard. It is yellow paste just like most other mustard but it does not have acidity in it and very hot. You can buy karashi at Japanese/Asian grocery stores. It comes either in a tube as paste or in a tin as powder. To make karashi paste from powder, you mix the powder with warm water in a little bowl to form a paste, cover it with cling wrap for a while to develop spiciness.

3. I just took about 4 cm of the shallot stem (white part) from the Pork ingredients.

5. Drop lid (Otoshi buta - 落し蓋) is a round lid which is slightly smaller than the opening of a saucepan. It is traditionally made of wood but I have a stainless lid. It is placed on top of the ingredients in a pot to ensure the heat is evenly distributed, cook faster, make the ingredients stay in place without breaking apart. It also stops the liquid from evaporating quickly.

If you don’t have a drop lid, you can make one with aluminium foil. Cut a square foil, fold the edges to make it a round shape with the diameter slightly smaller than the port. Then poke the foil with a knife or a chopstick to make holes in several places.

Though using a drop lid is the traditional way of cooking Kakuni, you could just put a lid on the pot though this may affect how evenly the pork is braised.

6. Transfer the liquid in which the pork was boiled into a container through a sieve and leave it in the fridge. When chilled, remove the excess fat formed on the surface of the liquid. You can also freeze it.

7. Use the side of your knife to press down on the side of the shallots to crush the stem. Do the same for the ginger to crush.