Whiting is often served in clear soup at special occasions because of its elegant taste and white meat. Make a knot from a fillet and serve with a green leaf in a dashi-based clear soup. Japanese Clear Soup with Whiting is a very quick and easy soup and is visually quite attractive. 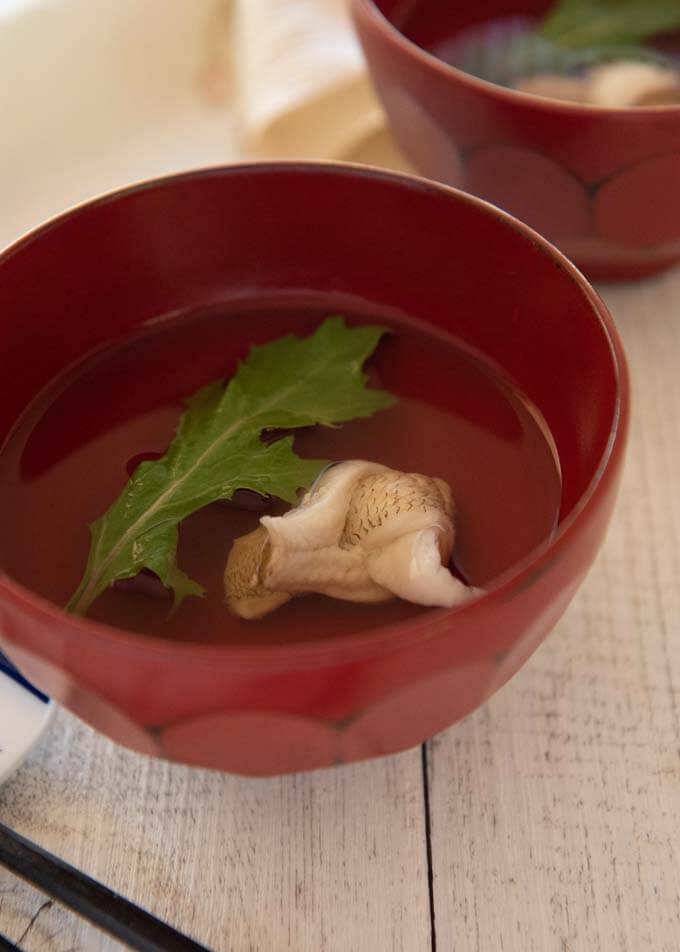 Japanese Clear Soup is called osuimono (お吸い物). I touched on osuimonoin my post Shrimp Balls (Ebi Shinjo) in Clear Soup. But today’s clear soup uses whiting fillet instead of shrimp balls and it is much simpler and faster to make.

Whiting is kisu (鱚or キス) in Japanese. The kanji character 鱚is made up of two kanji characters – 魚meaning fish and 喜meaning joy. This is another reason why Kisu no Osuimono (鱚のお吸い物) is served at special occasions. 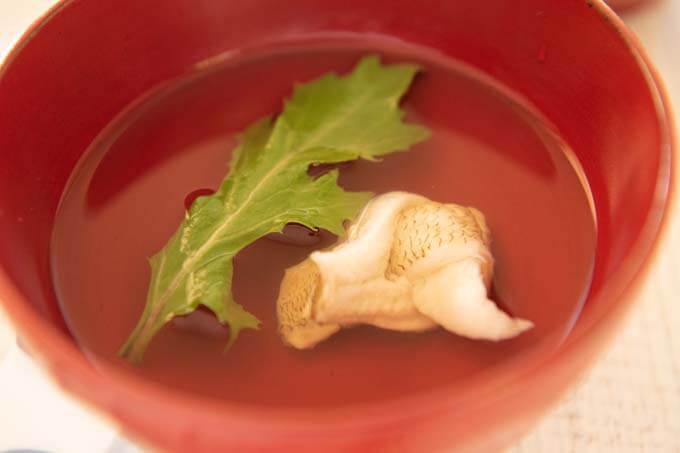 The proper way of making a knot with whiting is to make fillets from both sides of a whiting without detaching them from the tail so that you will have two strips of fillets to make a knot with. This method of filleting a fish is only applicable to small fish of less than 15cm/6”. It is often used to prepare fish for tempura.

Japanese people associate many cooking terms with nature, don’t they?

I talked about shigureni (autumn/winter rain that comes and goes momentarily) and sasagaki (vegetable cut to look like a bamboo leaf) in Braised Beef and Burdock with Ginger. Also, grated daikon is likened to sleet as mentioned in Smoked Salmon in Grated Daikon Dressing (Mizore-ae).

I can hardly find such small whiting at the fish markets nearby. So, I usually use one side of fillet and cut it in the middle to look like a matsuba oroshi fillet. This is actually easier to prepare especially if you buy small whiting fillets. 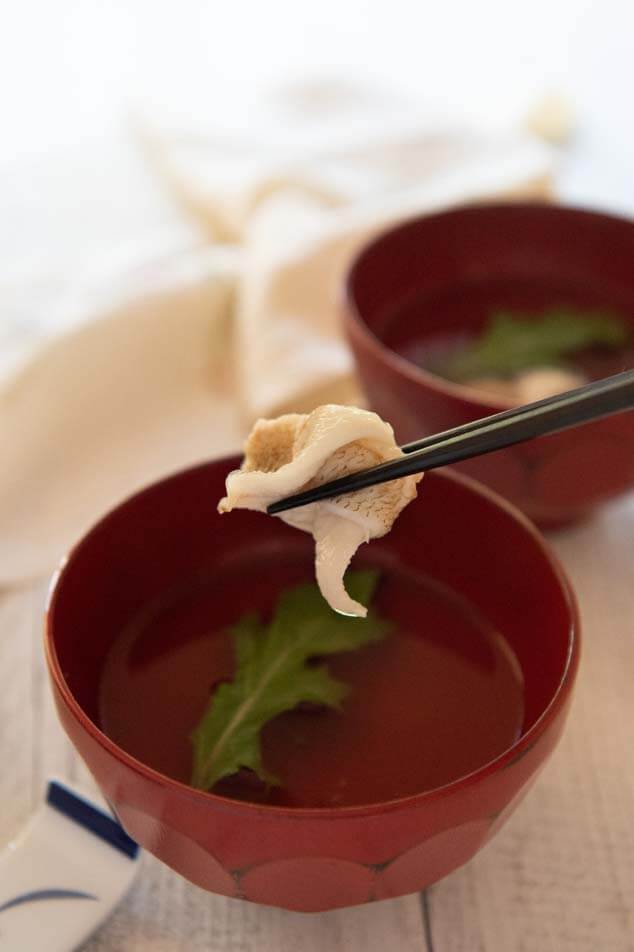 I know it is probably not easy to just buy two whiting fillets for the sake of making four servings of Japanese Clear Soup with Whiting and I’ve never bought just four fillets (or two whole whiting).

To tell you the truth, I usually buy a kilo of fresh small whiting when I find small ones about 15cm long. I fillet them and semi-dry them so that I can keep them in the fridge and freezer for grilling later. And in doing so, I put aside a few fillets to make Kisu no Osuimono.

I am planning to post a recipe for semi-dried whiting in the near future.

Making a Knot with Whiting Fillet for Japanese Clear Soup

It’s basically the same thing as tying shoe laces– but only the first step, i.e. tie an overhand knot.

You might find it a bit awkward to do because each piece of fillet is wide. But you should be able to tie them once and that’s all you need to do.

See the photos below for before and after tieing a knot. 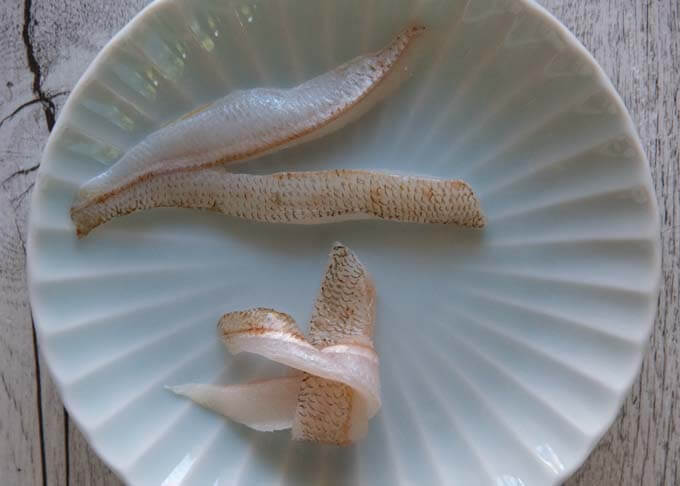 Do not Cook Whiting Knot in Clear Soup

Japanese-style Clear Soup is meant to be really clear. It might be slightly yellowish due to the colour of dashi stock but it is still transparent and not cloudy.

If you drop a raw knotted whiting into the boiling clear soup, the soup becomes a bit cloudy. To avoid this, the whiting knots need to be boiled first, then added to the clear soup.

Pre-cooking the raw fish also removes the fishy smell, although whiting is not as fishy as most other fish. 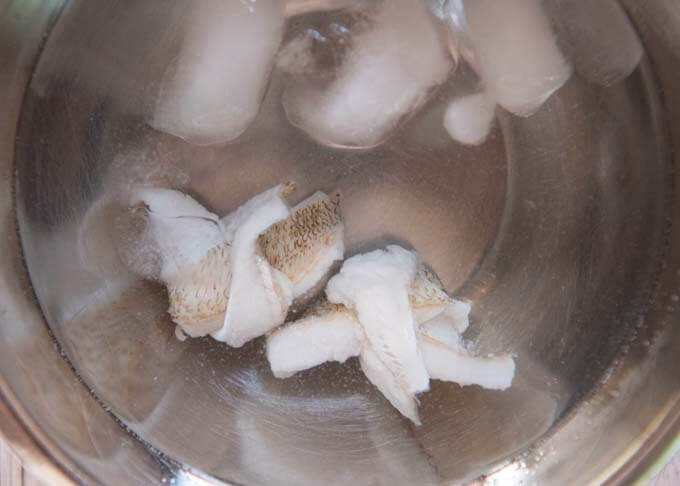 You only need to boil the knotted fish for 30 seconds or so in gently simmering water. Then transfer it to ice water to stop it cooking further. Place the cooked whiting piece in a serving bowl and add the hot clear soup. 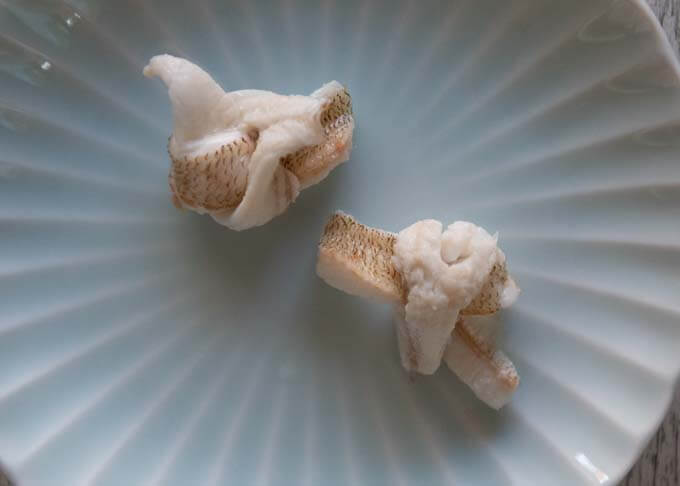 Garnish for Japanese Clear Soup with Whiting (Kisu no Osuimono)

Just a piece of whiting in clear soup lacks colour as the fish is white and the soup is transparent. The most common way of adding colour to such a soup is to add something green. 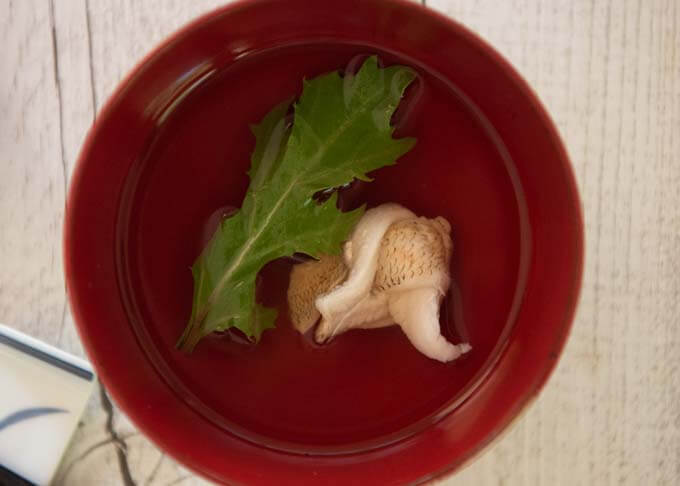 I used a mizuna leaf today to decorate the soup, but most recipes use mitsuba (三つ葉, a wild Japanese parsley or the Japanese version of Cryptotaenia), which is a Japanese herb that looks like large flat leaf parsley and has a distinct flavour unlike any other herb.

You can use other green leaves such as spinach or snow pea shoots. In the case of spinach, boil and cut to 4-5cm/2” long.

Japanese Clear Soup with Whiting (Kisu no Osuimono) is a delicate looking soup and is perfect for special occasions. It is very easy to make and the fish can be prepared ahead of time. 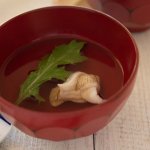 2. When the dashi stock is one of the key features of the dish like today, I use ichiban-dashi (see Home Style Japanese Dashi Stock) as it has the best flavour. But if you have no time to make dashi stock from scratch, you can use a dashi pack to make clear soup. Please refer to the instructions on the pack and use the appropriate quantity of dashi pack for the dashi stock required in the recipe.

3. Japanese people often use mitsuba (三つ葉, a wild Japanese parsley or the Japanese version of Cryptotaenia), which is a Japanese herb that looks like large flat leaf parsley and has a distinct flavour unlike any other herb. But I could not find them, so I used mizuna leaves instead.

You can use other green leaves such as spinach or snow pea shoots. In the case of spinach, boil and cut to 4-5cm/2” long.

4. If your whiting fillet is large, you will need to boil it a bit longer. The idea is to cook the fish 100% at this stage.

I think that clear soup goes well with deep fried dishes like Tempura which can also be a dish for a special occasion. 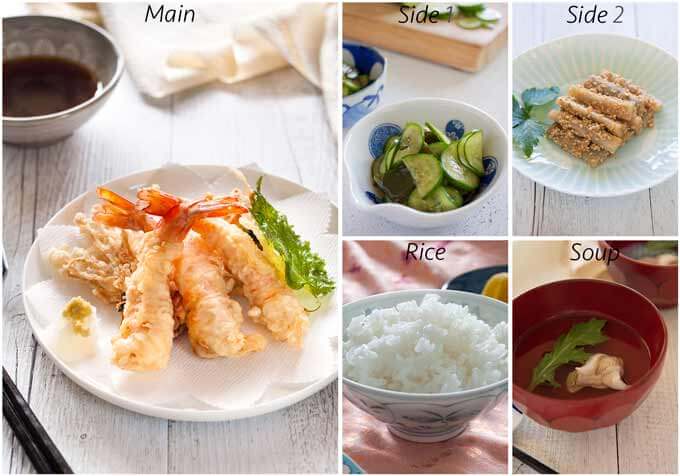