Seared Salmon Nigiri (Aburi Salmon) is one of the most popular nigiri sushi items at sushi train restaurants. The one with a sweet soy-based sauce brushed over the seared salmon is particularly popular. By searing it, the salmon becomes sweeter and more delicious. The faint aroma of charred flesh is also appetising. 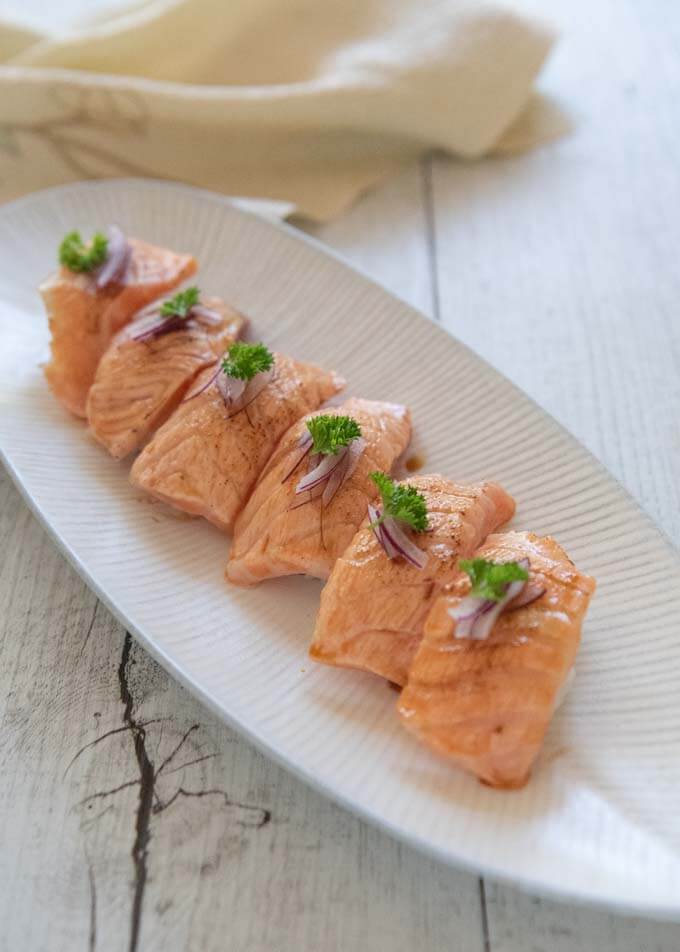 I had a request from a reader for the sweet sauce used on the Aburi Salmon that you get at sushi train restaurants. This was quite some time ago and today’s post is long overdue.

Seared Salmon Nigiri is probably one of the most popular raw fish nigiri sushi in Australia. Compared to the tuna nigiri, the salmon nigiri is much cheaper and the quality of the raw fish is good. The fatty flesh brings the best out of the raw salmon when it is seared.

Nigiri Sushi, which is called ‘nigirizushi’ (握り寿司) in Japan, originated in Tokyo in the Edo period when Tokyo was called Edo. To distinguish Edo-originated sushi from other types of sushi such as Chirashi Sushi, nigirizushi is also called ‘Edomaezushi’ (江戸前寿司), indicating the origin of the fish. 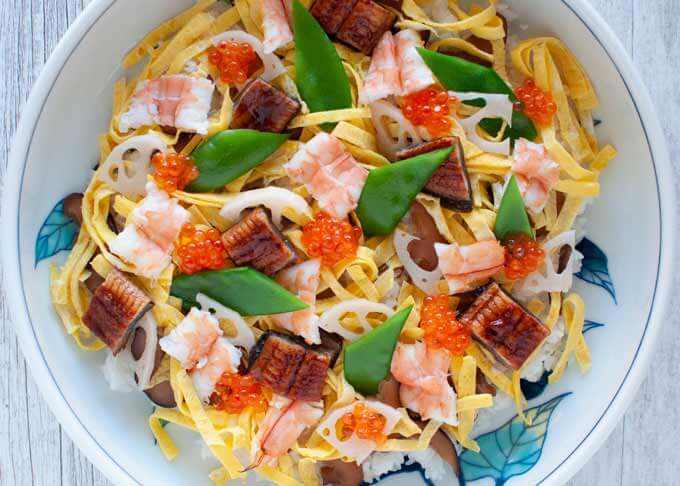 Chirashi Sushi is almost an opposite type of sushi to Nigiri Sushi.

The raw fish used for nigiri sushi were sourced from the fish caught in the Tokyo Bay area because there were no means of transporting fresh fish over a long distances at the time.

It was also known that the naturally grown salmon carried parasites, so people didn’t eat raw salmon. For this reason, salmon was not included in Nigiri Sushi until the late 20th century.

A quarter century before that, Norway began commercial salmon farming. In trying to market their farmed salmon, they targeted Japan. After overcoming many obstacles, Norway finally convinced a major Japanese seafood company to take up Norwegian salmon for raw consumption as a sushi item.

From then on, salmon sushi started gaining popularity. However, traditional Edomaezushi restaurants try to maintain hundreds of years of traditions and refuse to use salmon in their nigiri sushi. You will notice that expensive traditional sushi restaurants do not stock salmon.

The fact that popular salmon nigiri is often topped with mayonnaise is also a big issue for the traditional sushi chefs. They must be feeling it’s totally unorthodox. 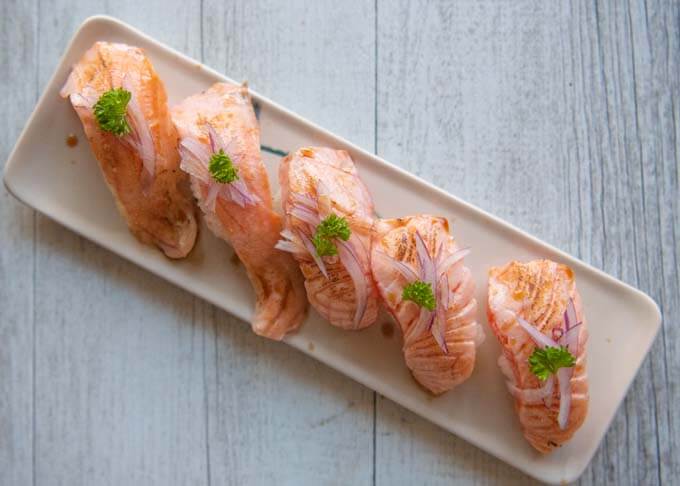 There aren’t many ingredients in Seared Salmon Nigiri. Since today’s recipe is all about nigiri sushi, I decided to add sushi language in the ingredients list below.

Do not buy sliced salmon sashimi from the shop unless it is sliced into the size suitable for nigiri sushi. Most sashimi sold at the shop is usually thicker and shorter in length, which is not sufficient to cover the rice.

Some sushi trains and sushi restaurants in Australia serve way too much rice with very thin and small pieces of raw fish (that’s a rip off!)

Other than the above ingredients, you will need a blowtorch (photo below) to sear the salmon. 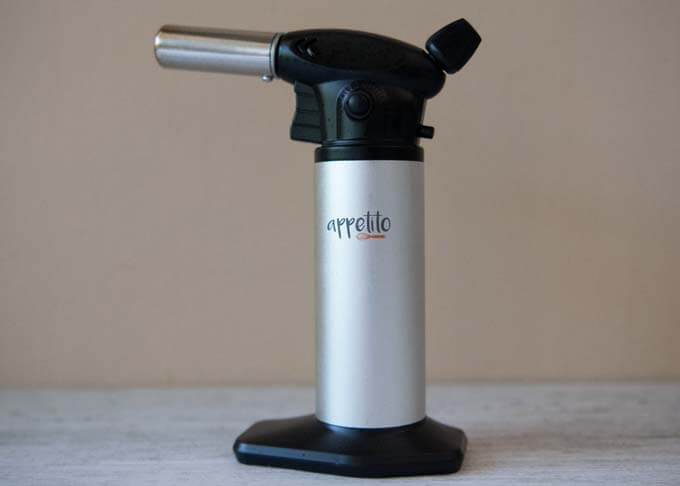 How to Make Salmon Nigiri

In my post Temakizushi, I explained how to make shari (vinegar rice), so in this section, I will concentrate on slicing the salmon fillet and making nigiri sushi.

How to slice salmon for nigiri sushi

As a rule, you need to slice a fillet against the grain of the flesh so that the slices are tender. This rule applies to other raw fish too. For salmon, you can use the white fat lines as a guide.

Try to slice the fillet with one long movement of the knife. Place the blade closer to the handle on the fillet and move the knife towards you in one go. This prevents the soft salmon flesh from breaking. You should not slice the fillet by moving the knife back and forth.

How to make nigiri sushi

A detailed explanation of how to shape a nigiri sushi is in the recipe card. Here is the step-by-step photo of how to make salmon nigiri sushi. 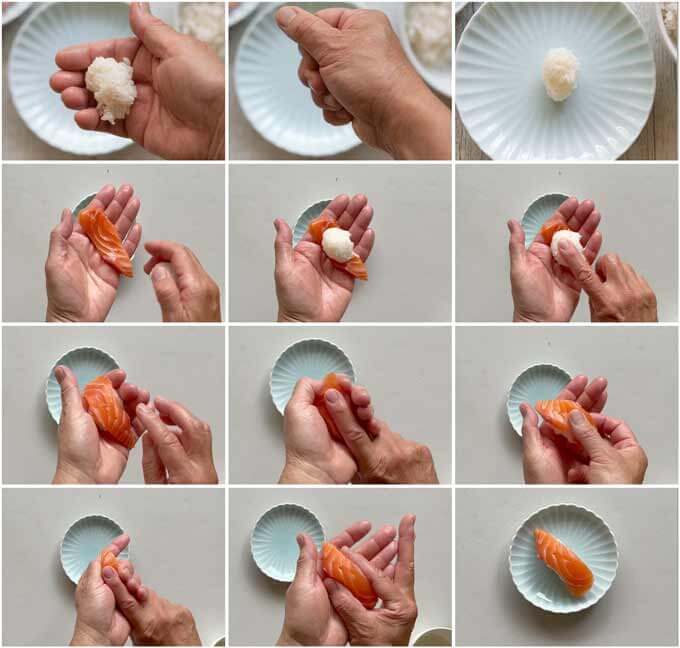 The idea in step 5 above is to make the rice firm (but not hard) and shape it into a round rectangle shape, while covering the top and the side of the rice with the salmon.

There is no single method of shaping nigiri sushi. Each sushi chef has his/her accustomed way of making nigiri. The above method is the best for me but you might prefer different methods.

I didn’t use wasabi today because I brushed the seared salmon with sweet tare, but if you are not using tare, place a small amount of wasabi paste on the salmon piece before placing a rice ball on it. You need to dip the nigiri in soy sauce to eat it in this case.

How to Make Aburi Salmon 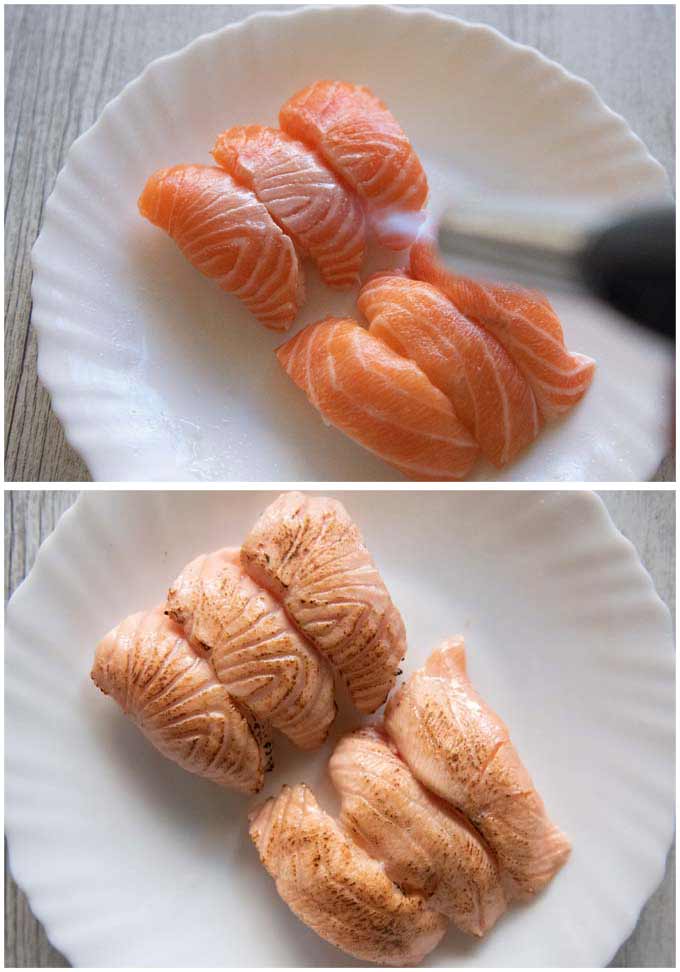 Not every household has a blowtorch. If you don’t have a blowtorch, you can make Aburi Salmon in one of the following few ways:

Here are the two different kinds of Seared Salmon Nigiri with a couple of salmon ‘gunkan maki’ (軍艦巻き, boat-shaped sushi). 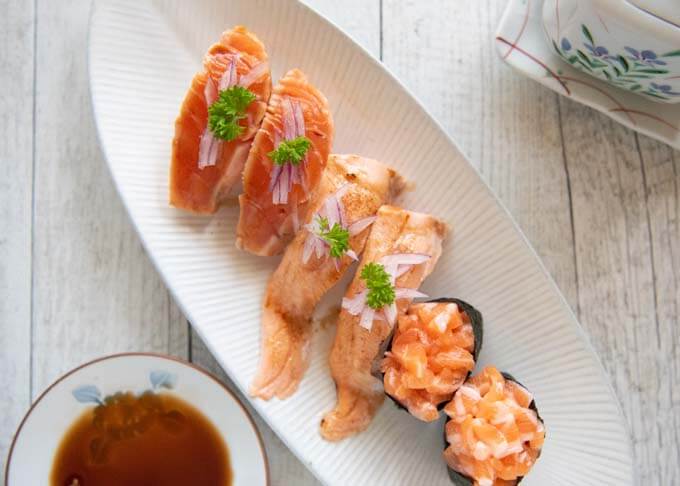 It is OK if your sushi does not look like the ones made by professionals. Even if your salmon is a bit smaller or thicker, don’t worry about it. Regardless of the look, they taste great. 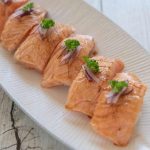 Seared Salmon Nigiri (Aburi Salmon) is very popular among Aussies, particularly with a sweet soy-based sauce brushed over the seared salmon. By searing it, the salmon becomes sweeter and more delicious. You will end up eating so many pieces without realising it.

Cook Time does not include the time to cook rice.

2. For sushi, you need to use either short grain rice (standard Japanese rice) or the rice sold as 'sushi rice' as the grains stick together better.

3. Most sushi shops in Japan do not use tare on Aburi Salmon. They serve Aburi Salmon expecting the diners to dip it in soy sauce, just like other raw fish nigiri sushi.
But in Australia, it is common to get Aburi Salmon sushi with sweet soy-flavoured tare brushed on it.

If you want to serve salmon nigiri without tare, I'd suggest that you put a small amount of wasabi paste on the salmon piece before putting the rice on.

4. If your fillet is large, cut it in half so that the width of the fillet is close to or slightly shorter than 8cm / 3⅛". The white fat lines should be running perpendicular or diagonal to the width.

Sogi-giri allows you to slice a fillet into the required size and thickness more easily than the standard slicing method. Because of the way you place the blade at an angle, you can control the width, length, and the thickness of the slice better (see the step-by-step photo in the post).

5. This is to prevent the rice from sticking to your hands. Hands should be wet but not too wet. If excessively wet, brush your hands with a towel to remove excess liquid.

The list below contains the similar dishes found on the menus of the traditional sushi restaurants, or the dish that sushi restaurants serve as an appetiser called ‘otōshi’ (お通し). I talked about otōshi in my post Izakaya-style Marinated Quail Eggs. 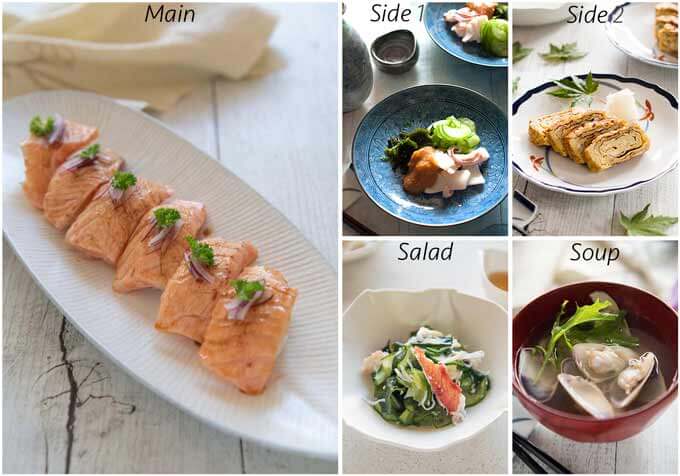