Today’s sashimi tuna is served in quite a different way. The sashimi is sealed with boiling water first, then marinated in soy sauce flavour before slicing. With a white trim around each slice, and semi-transparent dark red meat in the centre, Marinated Sashimi Tuna looks very attractive. It is also tasty without dipping soy sauce. 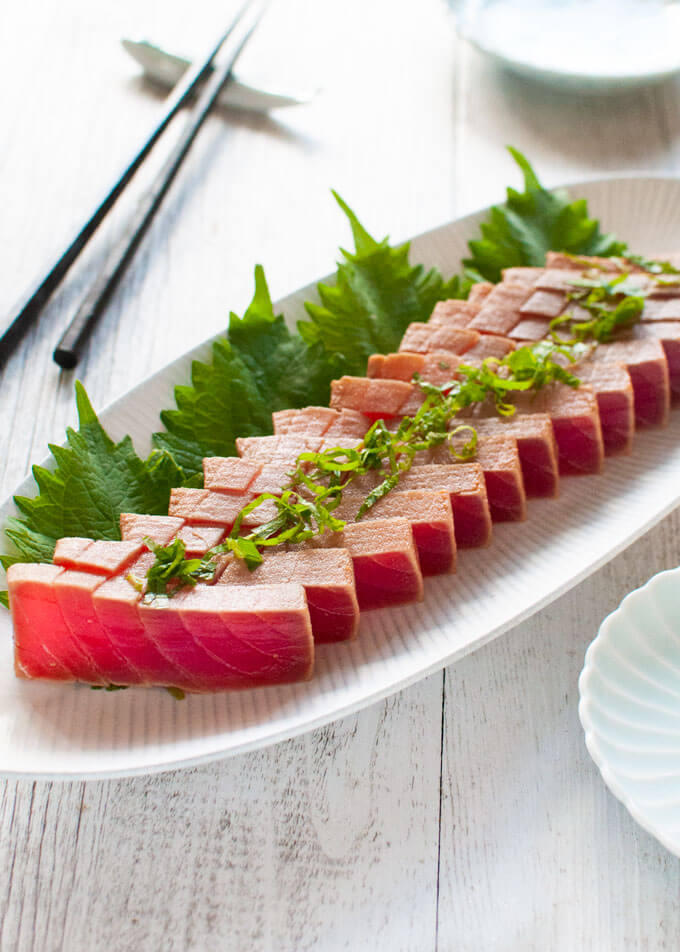 This is a perfect sashimi to impress people. Look at the way the slices reflect the light, making it look almost semi-transparent! Every slice looks like that when you lift it up and see it through the light. So pretty.

Unlike standard sashimi, you don’t serve today’s tuna sashimi with soy sauce and wasabi. The block of tuna is marinated in a soy sauce flavoured marinade, making the thin layer of the flavoured flesh around each slice just right to eat.

There are only three steps to make Marinated Sashimi Tuna:

Step 1: Seal the surface of a tuna block with boiling water – scalding.
Step 2: Chill the scalded tuna in ice water immediately. This is to prevent the tuna from cooking further.
Step 3: Marinate the chilled tuna block in the dashi and soy-based marinade for overnight, up to 3 days. 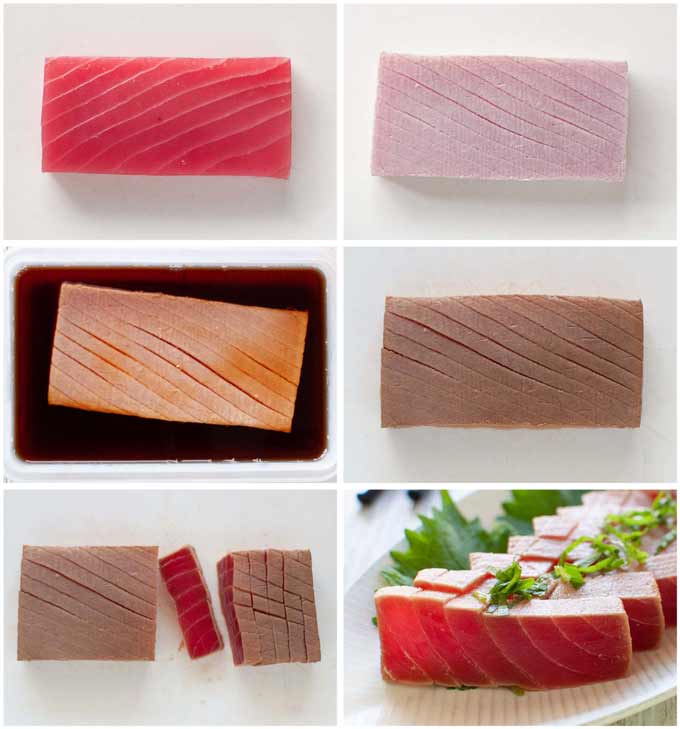 Scaled tuna resembles seared tuna but the thickness of the cooked area is much thinner.

By indirectly scalding the tuna, the surface of the tuna is cooked lightly, creating a very thin, elegant white trim around the meat when sliced.

It’s OK to seal the tuna without a kitchen towel but you will probably find that the surface of the sealed tuna is much whiter and the white trimming is thicker when sliced.

You will only need to change the colour of the surface to slightly white (see the step-by-step photo above). Gently pour boiling water evenly over the surface of the tuna block. Turn it over and scald on the other side. Do not forget to seal the side of the block, too. 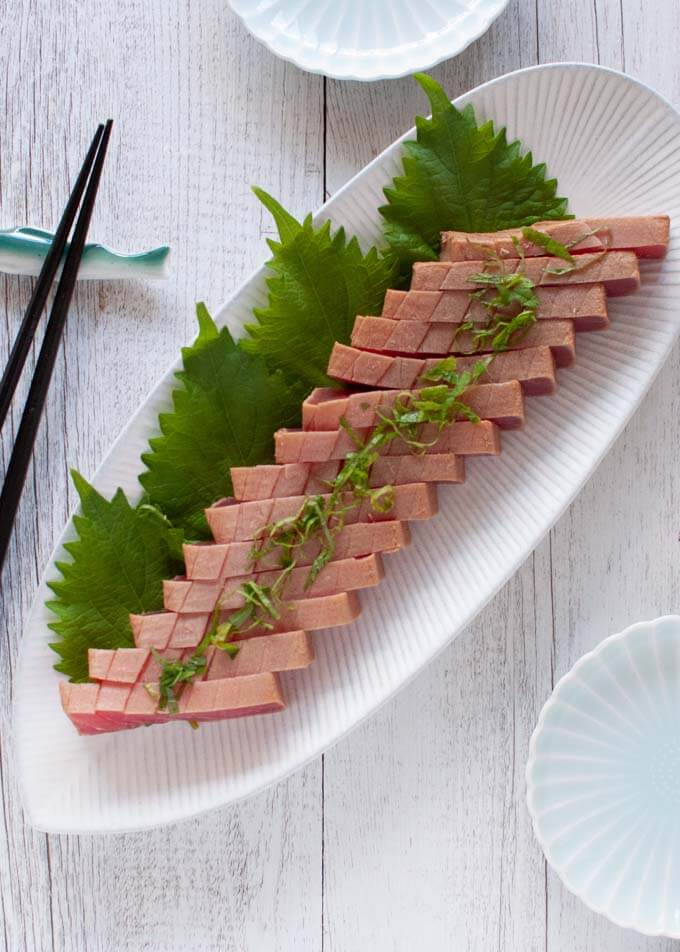 The marinade is a mixture of konbu dashi and soy sauce with a tiny amount of sake. Some recipes marinate tuna in just soy sauce with a bit of mirin/sake. But I think that marinade with dashi added to the soy sauce gives a more subtle flavour to the marinated tuna.

In my recipe, I made the marinade from scratch starting by making konbu dashi. But konbu dashi can be pre-made the day before if you like.

Marinating time can be any time from overnight to 3 days. Even if you marinate for 3 days, the tuna does not become too salty.

You might wonder why and the secret is scalding.  Because the surface of a block of tuna is sealed, the marinade cannot easily get through to the inside of the tuna.

When you slice the marinated tuna, you will notice that only the thin outer part of the tuna slice is slightly dark due to marinade. 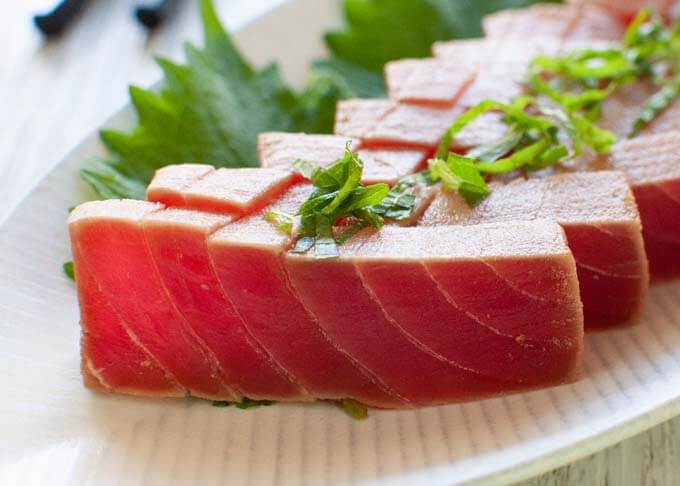 It would be best if you can buy one rectangular sashimi tuna block like the one in my recipe. The size of the block I used was about 7cm x 14cm x 2.5cm/2¾” x 5½” x 1”. It was sold frozen at a Japanese grocery store.

If your sashimi tuna block is a different shape, e.g. triangle, cut the block into 2-3 rectangular blocks. It does not have to be a neat rectangle either, so try to make large blocks, thinking the size of a single piece when sliced.

Unlike usual sashimi, you have to spend some time on tuna before serving. But I must say it is worth the effort. It is a great appetiser or a side dish. It can even be served as a main. 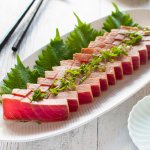 This is quite a different way of serving sashimi. The sashimi is seared with boiling water first, then marinated in soy sauce flavour before slicing. With a white trim around each slice and semi-transparent dark red meat in the centre, Marinated Sashimi Tuna looks very attractive. Great for serving at gatherings, too.

Sashimi can be served as side, appetiser or even main. Just change the serving amount per person.

Total Time does not include the time to marinate.

1. Luckily, I could buy a neat rectangular shape of frozen sashimi tuna at the Japanese grocery store as you can see in the post. The size of the block was about 7cm x 14cm x 2.5cm/2¾” x 5½” x 1”. One block like this would be the easiest to handle.

But if your tuna comes in a different shape or in two smaller pieces, that’s quite alright, too. The important thing here is that the shape of the tuna block is suitable to make sliced sashimi.

2. Please refer to Varieties of Dashi Stock where the recipe for how to make Konbu Dashi is included.

3. If you want, you can make the marinade the day before.

4. You can also marinate tuna in a zip lock bag. But you need to turn the bag over occasionally while marinating so that the tuna is marinated evenly.

5. If your container is a bit too large and the tuna block cannot submerge in the marinade, place small shot glasses, bottles, baking beads, etc. around the tuna to increase the depth of the marinade. Of course, you can increase the amount of marinade as an alternative.

6. Searing the surface of the tuna prevents the marinade from penetrating into the flesh of the tuna too much. So, you can keep marinating for 2-3 days without making the tuna too salty.

7. Nutrition per serving as a side. I assumed 50% of marinating liquid would be consumed. Hence, the amount of sodium is very high. In reality, not much salt is absorbed into the tuna and sodium should be much less.

Since the side is sashimi, I thought it would be good to pick a meat dish for main. I wanted to add green to the meal so Chrysanthemum Leaves Goma-ae was selected for Side Dish 2. 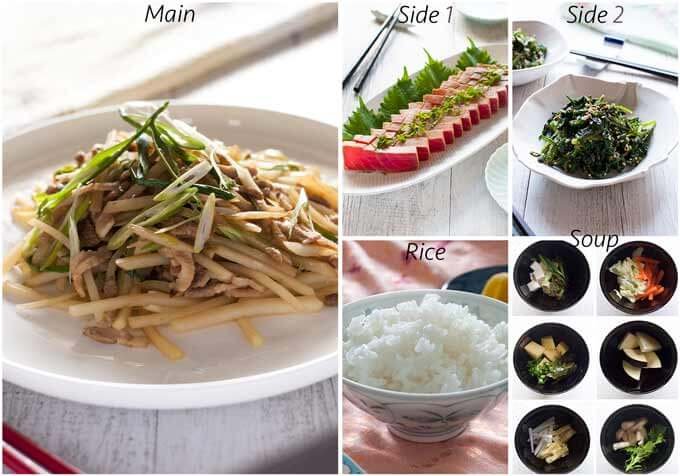