You will be surprised to learn that the texture of potatoes when quickly stir fried is so unique and different from the cooked potatoes you know. Pork and potato stir fry turns the potatoes into something totally different from the usual dishes like baked potatoes, potato salads and mashed potatoes. And it is so quick to make and delicious. 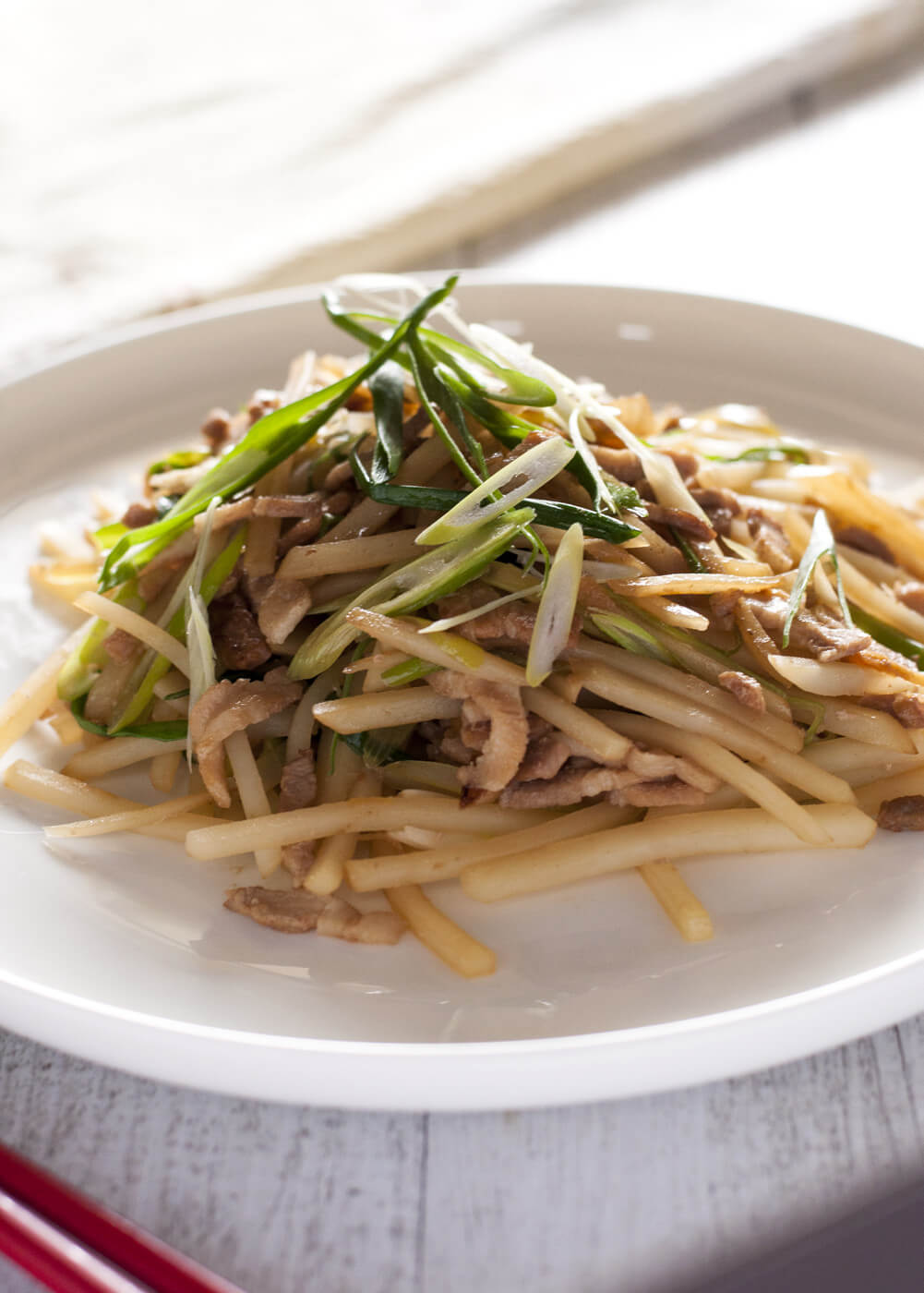 I found this dish in the cook book I bought when I first got married. I was keen to cook and try new dishes as my mother was not a good cook at all and her repertoire was limited. And so was mine as a consequence.

This cook book was first published in 1972 and its title is “Osozaifuu Gaikoku Ryori (おそうざいふう外国料理, Japanese Home Style Western dishes)”. It sounds strange but basically the Western style dishes and the Chinese dishes are somewhat modified to suit the Japanese palette, using common Japanese seasonings where appropriate. 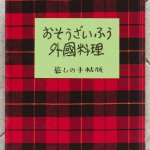 The cover page of my recipe book, Osozaifuu Gaikoku Ryori. It must be popular even now as it is still getting re-printed.

Half of the recipes in this book are Chinese dishes and the other half are from Europe, although they classify as Western Style dishes. There are no Middle Eastern dishes; nor Indian or South Asian. It really reflects the food culture of Japan at the time. There is German style rolled cabbage, French style potato soup, Greek style carrots and Irish stew to name a few.

I actually checked the Irish stew recipe in this book. Season chunks of pork belly and cook them in water with onions, potatoes, and bay leaves for a couple of hours. Adjust to taste with salt. That’s about it.

I understand that the traditional Irish stew uses lamb. Japanese people are not used to eating lamb so I can understand why pork was used in this recipe. But cooking in just water without using soup stock is a very traditional way of cooking Irish Stew and I was quite impressed with the recipe.

I have tried recipes selectively from this cookbook. Aren’t we all like this? Buy a cook book only for few favourite recipes! One recipe I always came back to from this cook book was “Pork and Potato Stir Fry” from the Chinese section. 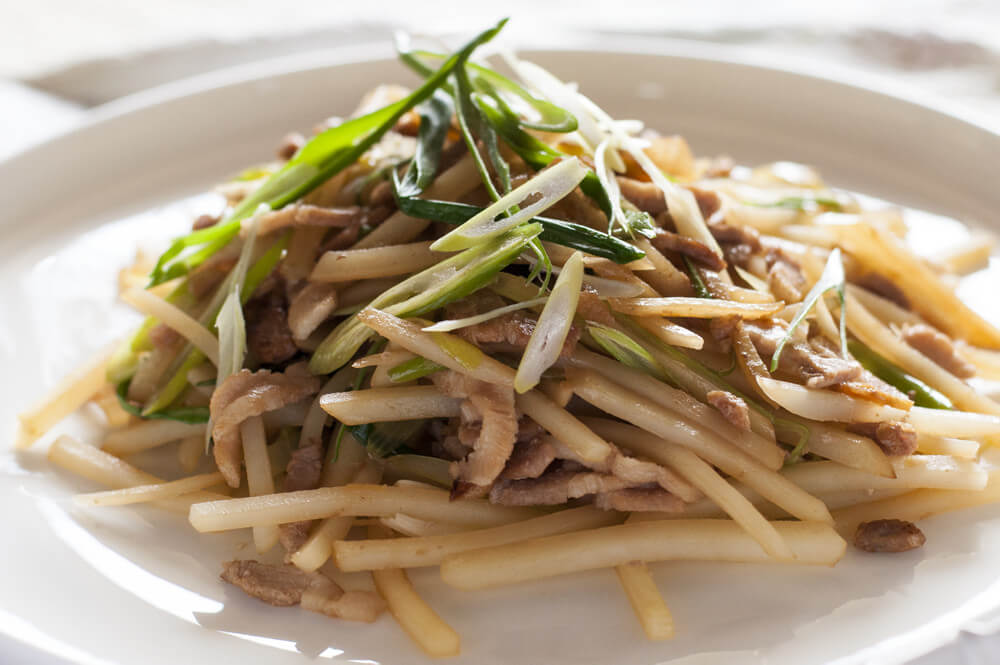 I picked this up to try because it had a note in the recipe saying that people who tasted this dish said “Are they potatoes?”. This little note got me curious. And they were right. The potatoes were quite different from what you usually expect them to be. They even had a touch of crunchiness.

The secret to the unique texture of the potatoes is blanching before stir frying. It is also important to cut the potatoes into the consistent thickness of matchsticks. This will ensure that every one of the potato pieces is cooked to the same texture.

The original recipe uses beef instead of pork but I like pork better. Pork should also be sliced into thin strips to match with the shape of the potatoes and so should the shallots (scallions). And that’s all it is – just 3 ingredients. Flavouring is also simple with ginger, soy sauce, salt and sesame oil. Over time, I have adjusted amount of seasoning to suit to my family’s palette.

Since potatoes and shallots (scallions) are almost staple ingredients of many households, if you have pork (or beef for that matter) in the fridge, you can make a simple yet tasty dish like this in no time.

You will notice that today’s post is rather short. It is hard to write a lot when the ingredients are common and no special techniques are required unlike other traditional Japanese dishes. But this is a good thing, isn’t it? 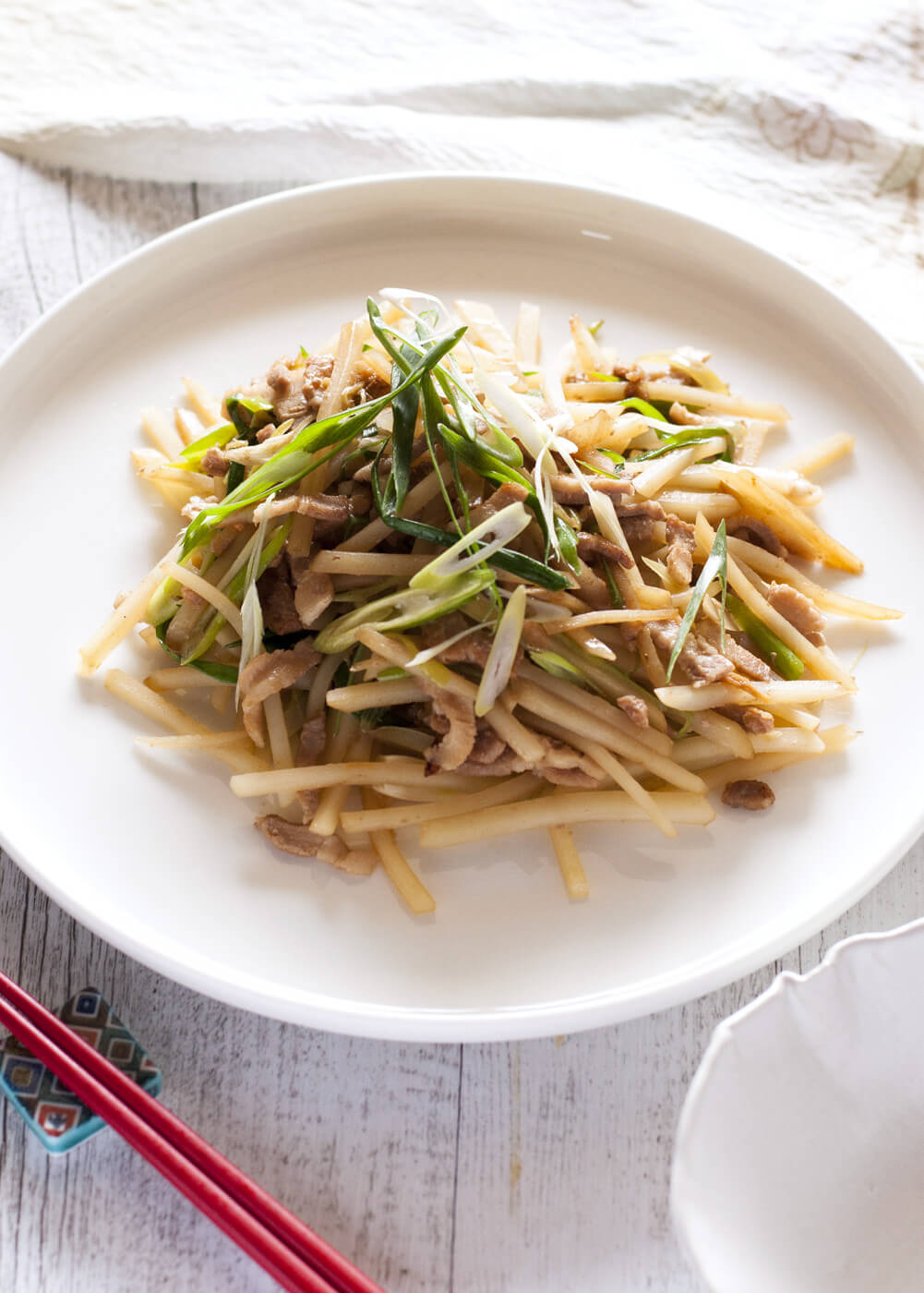 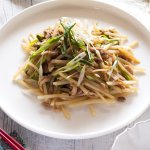 You will be surprised to learn that the texture of potatoes when quickly stir fried is so unique and different from the cooked potatoes you know. Pork and potato stir fry turns the potatoes into something totally different from the usual dishes like baked potatoes, potato salads and mashed potatoes. And it is so quick to make and delicious.

1. You could use sliced pork belly if available. This will save your time. You could also use other cuts of pork meat except stewing meat. If the meat is lean, you may want to increase the oil by ½ tablespoon.

You could also use beef instead of pork.