Kitsune Soba is one of the very traditional noodle soups, with just seasoned aburaage (fried tofu) and green onions as toppings. The sweet aburaage on the noodles is so delicious. If you use udon noodles instead of soba, it becomes Kitsune Udon.

By using a vegetarian dashi stock, you can make it a perfect vegan noodle soup. 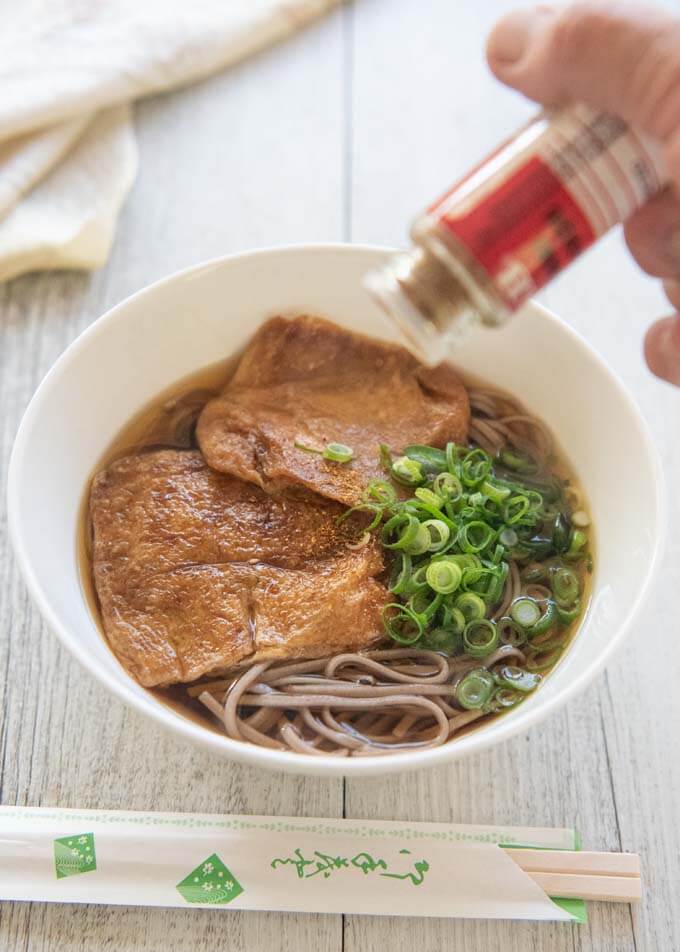 You might wonder why today’s noodle soup is called Kitsune Soba instead of Aburaage Soba. There is a good reason for it.

‘Kitsune’ (狐 or きつね) is fox in Japanese. In the second oldest book of classical Japanese history (early 8th century), the Nihon Shoki (日本書紀) fox appears as a messenger of god. That’s why you see statues of foxes at some shrines in Japan. 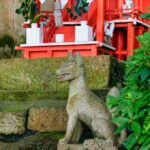 A statue of fox at inari jinja.

Those shrines with fox statues are called ‘inari jinja’ (稲荷神社), and worship the god of rice and other agricultural produces.

According to Japanese mythology, foxes are fond of aburaage and people offer a sheet of aburaage to the shrine and pray. Hence the name ‘kitsune’ became associated with aburaage. Incidentally, the name of the dish, Inari Sushi (Inarizushi) also came from it, i.e., aburaage and inari jinja.

There is an equally simple noodle soup called Tanuki Soba (or udon). Instead of using seasoned aburaage as a topping, you put in tempura bits called ‘tenkasu’, which are deep-fried tempura batter bits. 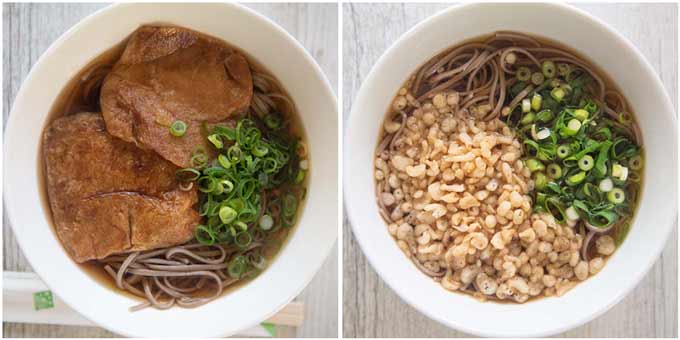 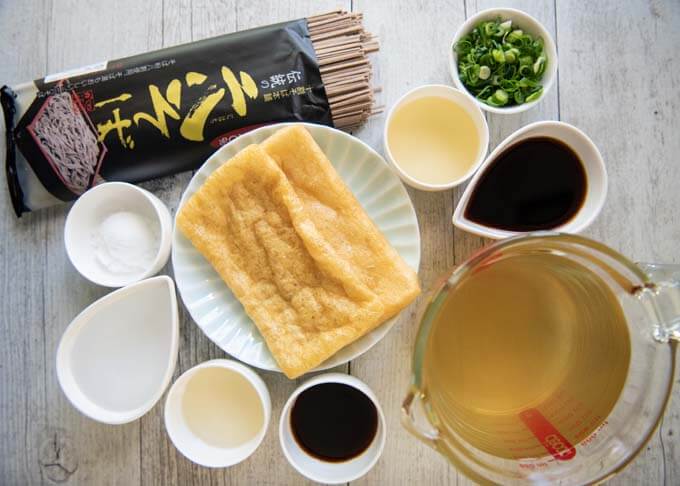 Shichimi tōgharashi is always served with soba or udon noodle soups in Japan. It gives a bit of spiciness to the broth. See the specks of shichimi tōgarashi on the aburaage below. 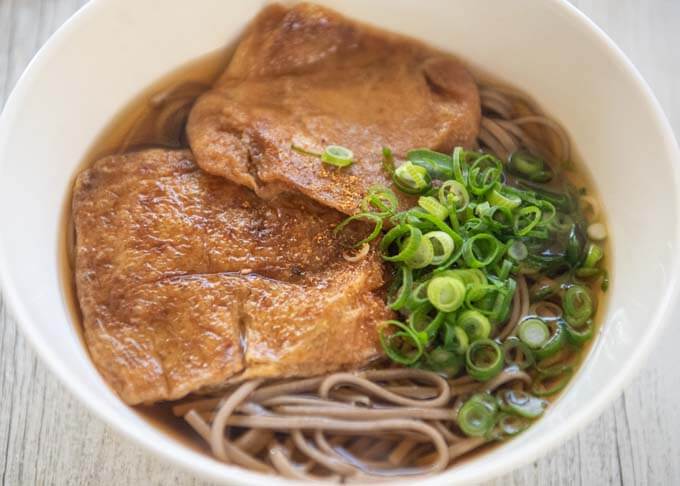 The ingredients for the broth is identical to my Tempura Udon noodle soup. If you have a sweet tooth, you can add some sugar to the broth.

If you want to make Kitsune udon, replace the soba with udon. If you are making tanuki soba/udon, replace the Seasoned Aburaage with a plenty of tenkasu. Instead of dried udon noodles, you can follow my recipe here and use fresh Home-made Udon Noodles. 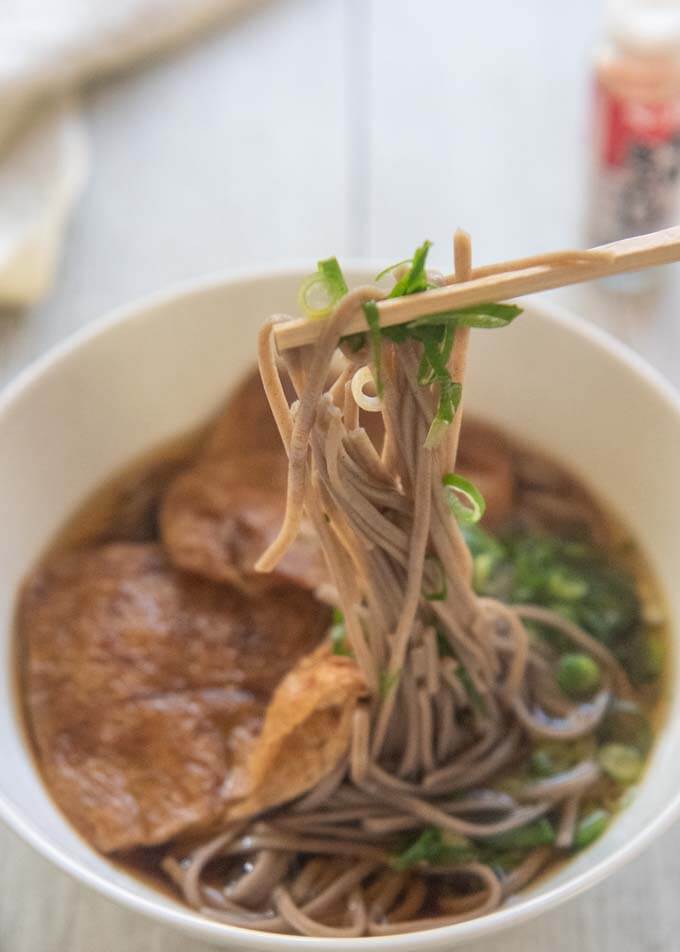 There are three distinct components to today’s recipe as per the steps below, but none of them are difficult. 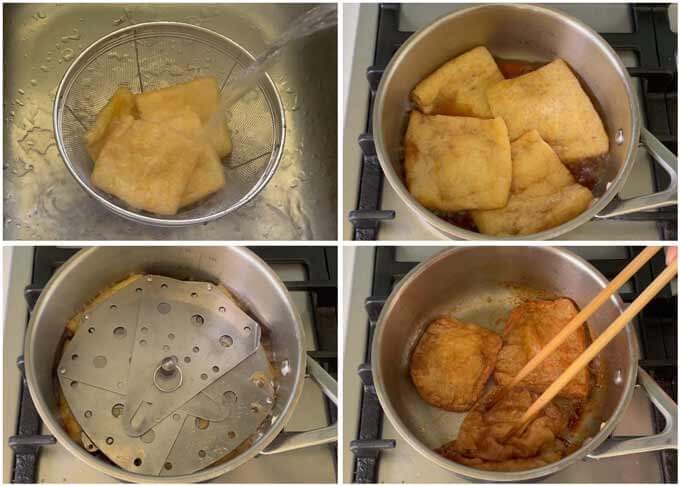 The flavour of aburaage is very similar to the aburaage used for Home-made Inarizushi. If you want a short cut, you can buy a pack of seasoned aburaage pouches and use them as a substitute. This will certainly speed up the process of making Kitsune Soba! You can find details about store-bought seasoned aburaage in my recipe Quick Inari Sushi (Inarizushi).

Step 5 is very important when you boil soba or udon noodles. When noodles are boiled, the starch comes out of them, and it makes the surface of the noodles slimy. The starch also makes the broth cloudy. Rinsing the noodles in cold running water not only removes the starch but also firms up the noodles. 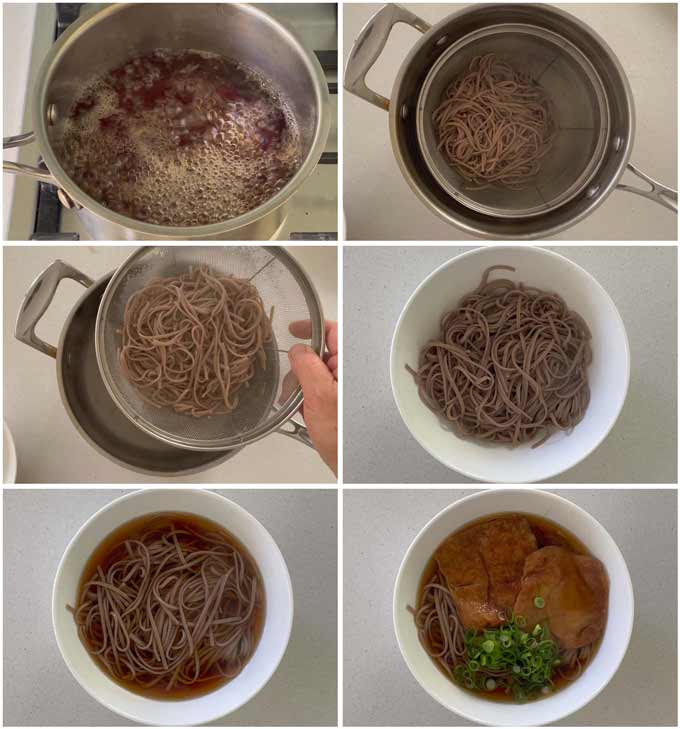 Using today’s recipe, Kitsune Soba (Buckwheat Noodle Soup with Fried Tofu), you can make the 4 simple noodle soups as below. It’s a bonus!

To add colour to the dish, some noodle shops put a couple of slices of pink kamaboko or narutomaki (see the photo below), which are steamed fish paste. 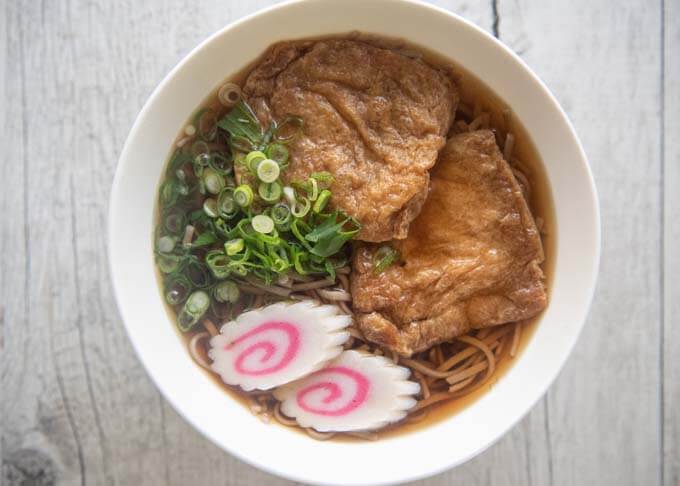 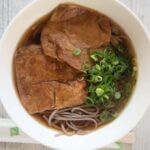 Kitsune Soba is one of the very traditional noodle soups with just seasoned aburaage (fried tofu) and green onions as toppings. The sweet aburaage on the noodles is so delicious.

By using a vegetarian dashi stock, you can make it a perfect vegan noodle soup.

2. Seasoned aburaage freezes well. You can make many of them and stock up in the freezer. It will speed up the cooking process.

If you have a sweet tooth, you can add some sugar.

If you don’t have instructions, boil in a generous amount of water and check the doneness by eating a strand from time to time. The centre of the noodle should be just cooked through.

5. It would be good if you make it just in time to serve. If you make a broth too early, bring it to a boil again.

6. I warmed the noodles per serving because it was easier to handle. But you can warm all of the noodles at once, then halve them to serve if you prefer.

7. If you want to make kitsune udon, instead of Kitsune Soba, replace the soba noodles with udon noodles.

As mentioned in my post, tanuki soba is topped with tenkasu, instead of seasoned aburaage. By swapping the topping and noodles, you can make tanuki soba or tanuki udon using this recipe.

To add colour to the dish, you can put a couple of slices of kamaboko or narutomaki.

8: Nutrition per serving. It is assumed that you drink all the broth. If you only drink half of it, you can cut back sodium by almost 50%.

I needed to pick a main dish that contains a good amount of protein and vegetables.  Jibuni goes very well with Kitsune Soba.

When you order a bowl of soba at a restaurant, it is often served with a small serving of pickles. So, I chose a traditional Pickled Nappa Cabbage for one of the side dishes.

Kitsune Soba serves as a rice dish as well as a soup. So, I decided to pick an extra dish to go with it. I think that a vinegar-based side dish like Octopus and Cucumber Sunomono gives a variety of flavours to the meal. A seaweed dish goes well as an extra side dish. 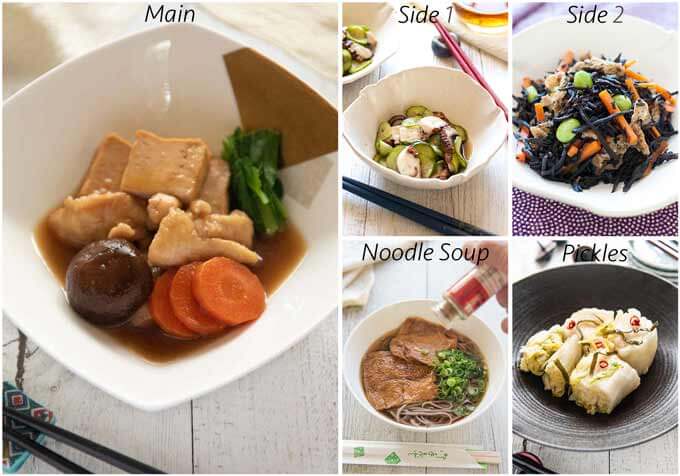