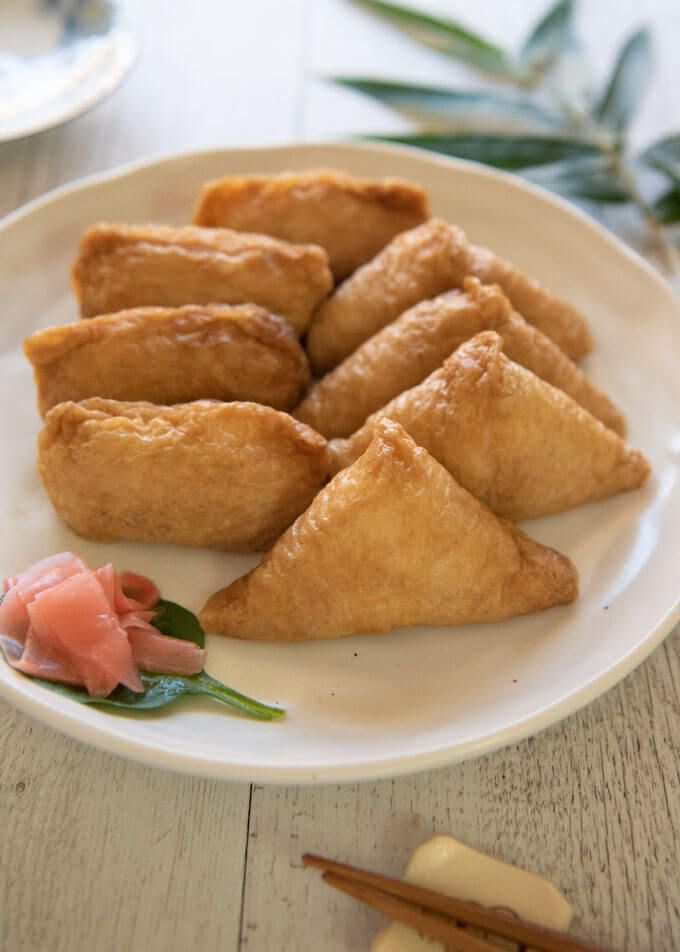 A seasoned aburaage pouch for Inarizushi is sometimes called ‘inariage’ (いなり揚げ) because it is aburaage (油揚げ) for Inarizushi (いなり寿司). Home-made Inari Sushi starts from cooking inariage at home.

Inari Sushi is a popular dish in Japan along with nigiri sushi (nigirizushi – hand-pressed sushi that you find at sushi trains). It is particularly popular among children.

I mentioned in my post Quick Inari Sushi (Inarizushi) that there are two different shapes of Inarizushi – squarish oval shape and triangle shape. In today’s recipe, I made both shapes of inarizushi. 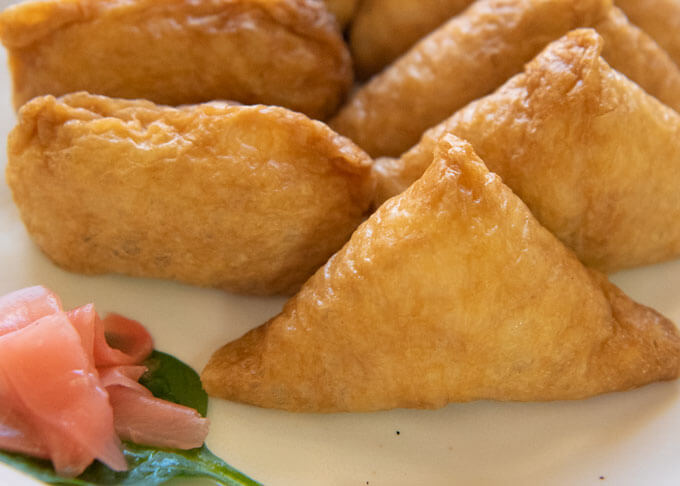 The basic steps to make seasoned aburaage pouches are as follows.

The photo below shows the two different cuts of aburaage. 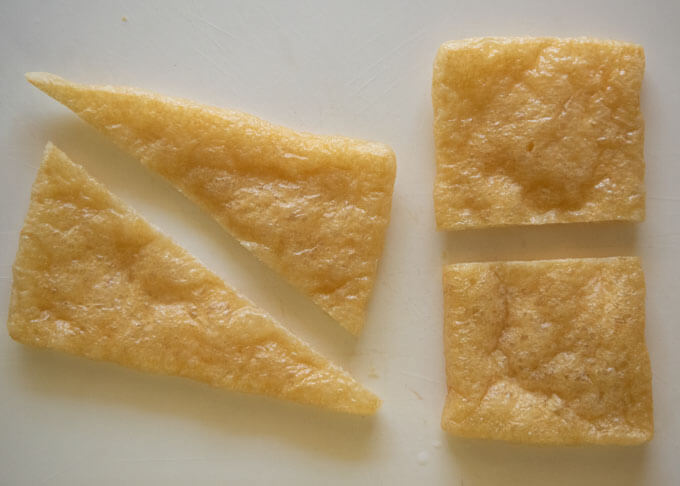 After halving the aburaage, you will need to convert each piece into pouches. The inside of aburaage is usually stuck in many places. You need to put a finger inside at the opening and gently detach where the tofu is stuck.

The bottom and the corners of the pouch may also be stuck. Make sure that you run your finger along the inside edges and detach them as much as you can.

Whenever you need to cook aburaage, it is a common practice to pour boiling water over the aburaage or boil them so that excess oil can be removed. Squeeze the water out of the aburaage and they are ready to cook. 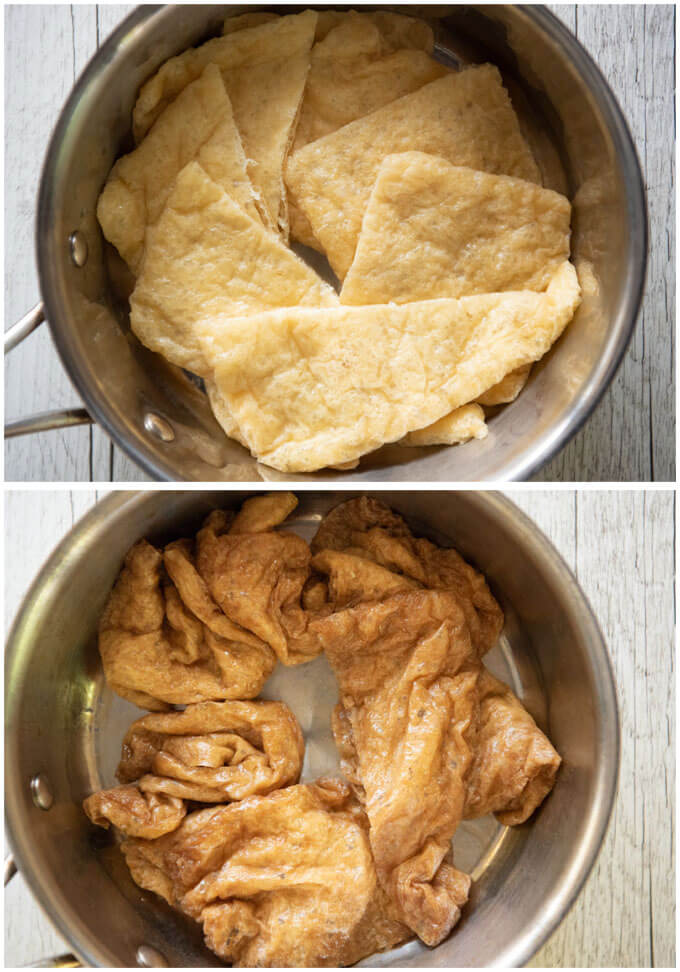 In a shallow pot, I spread aburaage pouches flat in a uniform manner so that the surface of the aburaage pieces are even and level.

Add dashi stock, soy sauce, sake, mirin and sugar to the pot and cook for 10 minutes until the liquid almost evaporates. That is it. Once the aburaage pieces are cooled down, they are ready to fill with sushi rice.

I mentioned in the previous recipe, Quick Inari Sushi (Inarizushi), that the sushi rice can be mixed with vegetables etc. Today, I added roasted white sesame seeds to give the rice a slight sesame flavour. 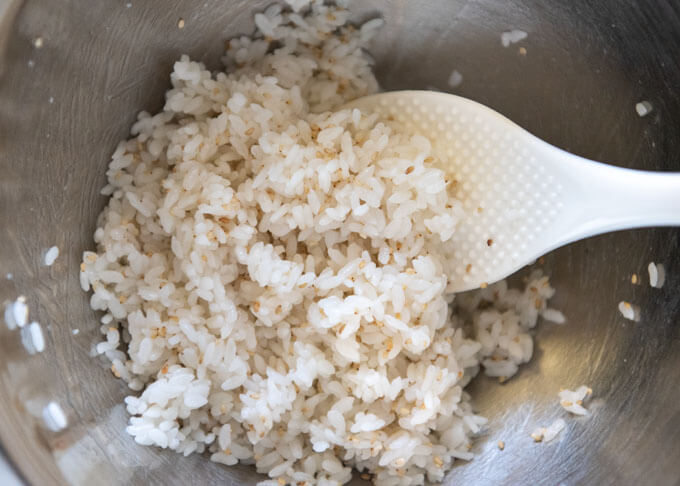 Make plain sushi rice as per the recipe in the post, Temakizushi (Hand Rolled Sushi), then mix roasted white sesame seed into the sushi rice.

The amount of sesame seeds I added was 1 tablespoon for 240g/8.5oz of sushi rice. It’s quite a lot but you can hardly notice that because of the colour of the sesame seeds.

Before filling the pouch with rice, it is easier to make small oval rice balls, ready to put into the aburaage. 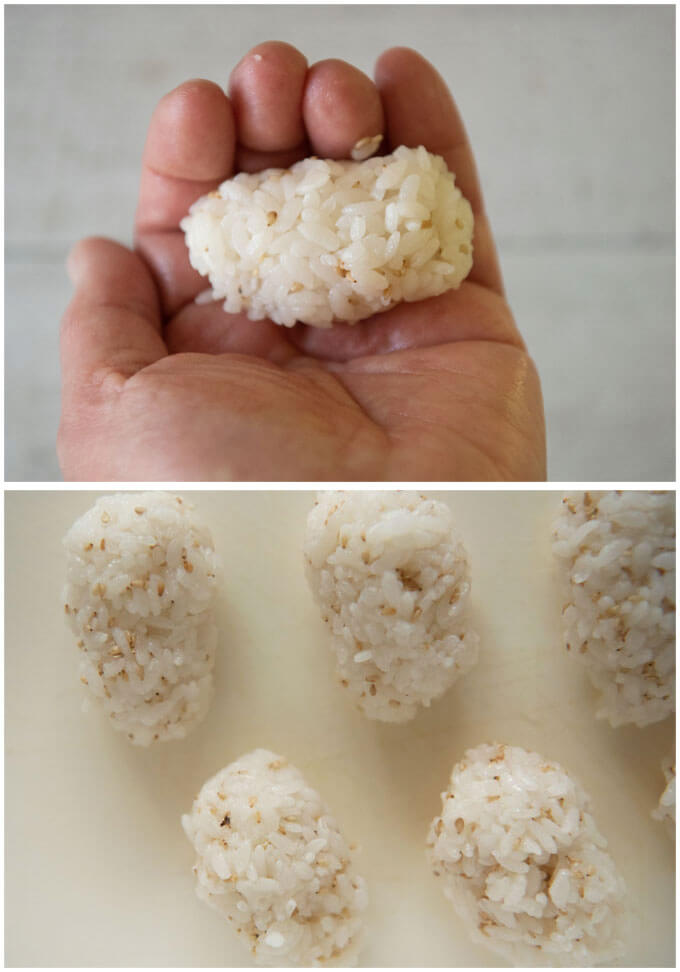 The wrapping method to make a triangle Inarizushi is quite different from that of a squarish oval one. For the oval one, you can find the step-by-step wrapping method in the post Quick Inari Sushi (Inarizushi). 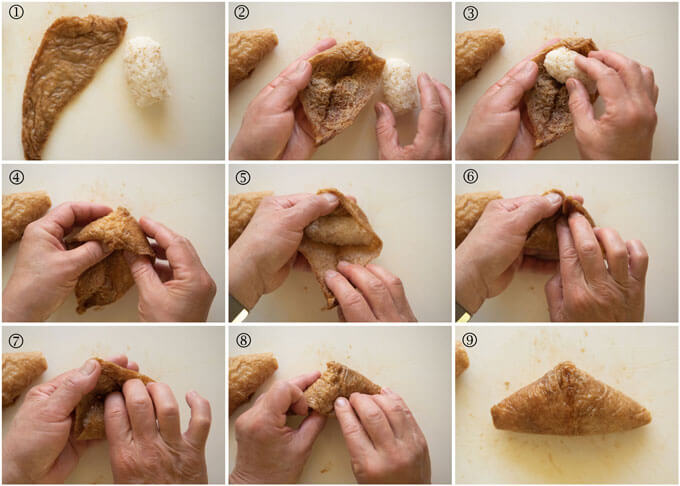 Even when I was a child, Inarizushi always came with pickled ginger, just like nigiri sushi is served.

In my recipe, I only explained how to make a triangle Inari Sushi but if you make different kinds of Inari Sushi and present them on a plate, it looks great. Here is the example of mixed Inari Sushi. 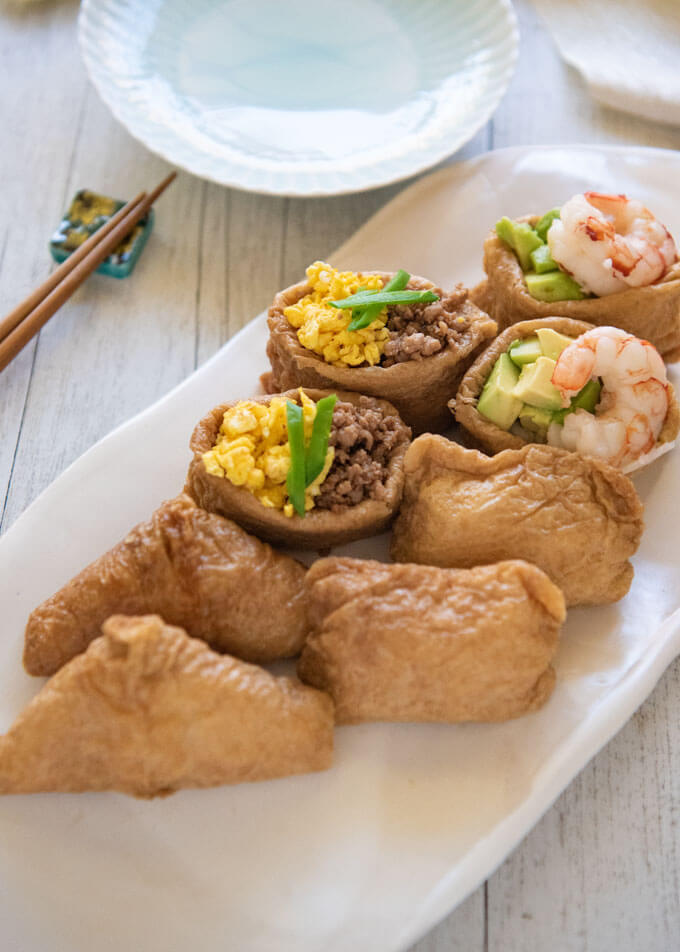 For other types of Inarizushi, please refer to the post Quick Inari Sushi (Inarizushi). 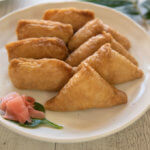 Making Inari Sushi from scratch is not difficult. All you need to do is cook seasoned aburaage pouches (inariage) and sushi rice, then wrap the rice in aburaage pouches. It tastes so good.
In this recipe, you will make 4 triangle Inarizushi and 4 squarish oval Inarizushi.

Cook Time does not include time taken to cook sushi rice.

No 'MEAL IDEAS' today. You can find the meal idea with Inari Sushi in the post Quick Inari Sushi (Inarizushi).

2. Instead of white sesame seeds, you can use roasted black sesame seeds. If you do, you should reduce the quantity of sesame seeds as 1 tablespoon would make the rice with too many black dots.

3. If you want, you can use water instead.

4. Drop lid is called ‘otoshi buta’ (落し蓋) in Japanese. It is a round lid that is slightly smaller than the opening of a pot. It is traditionally made of wood but I have a stainless lid as well.

It is placed on top of the ingredients in a pot to ensure the heat is evenly distributed, cooks faster, and makes the ingredients stay in place without breaking apart. It also stops the liquid from evaporating quickly.

If you don’t have a drop lid, you can make one with aluminium foil or baking paper. Cut a square foil/paper, fold/cut the edges to make it a round shape with the diameter slightly smaller than the pot. Then poke the foil/paper with a knife or a chopstick to make holes in several places.

5. To prevent the rice from sticking to your hand, wipe your hand with a cooked inariage to wet it.

6. Nutrition per Inari Sushi. It is assumed that 2/3 of the water in dashi stock is evaporated while cooking inariage (only affects the serving weight).