Tenshinhan (天津飯) is a Chinese-influenced Japanese dish. The fluffy omelette with crab meat is placed on a mound of rice and the thick sauce poured over the omelette is so flavoursome. Crab Omelette on Rice is very easy to make. 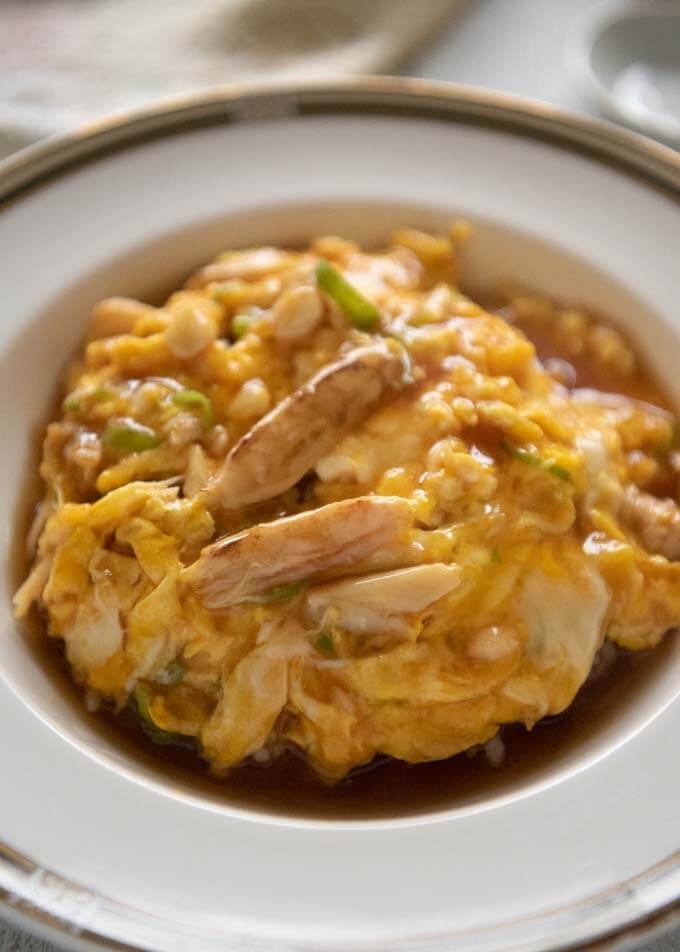 Many people, including Japanese people, mistakenly think that Tenshinhan is Chinese food. It is indeed served at Chinese restaurants in Japan – it is a made-in-Japan dish, but it is derived from a Chinese omelette dish.

The name of the dish has nothing to do with the appearance or ingredients of the dish. Tenshin (天津) is the name of a city in China, although it is called ‘Tianjin’ in English. ‘Tenshin’ is the Japanese way of reading these characters.

Apparently, this dish is associated with the high-quality rice produced in Tianjin that was used by Japanese  restaurants in the early Shōwa period – the era of supply shortages. 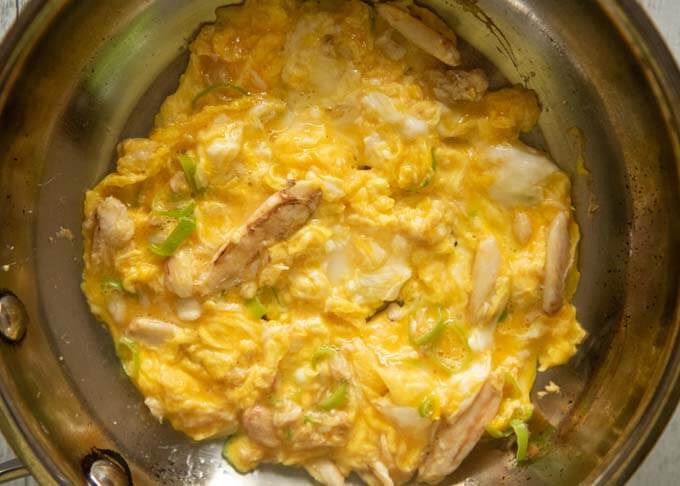 Today’s dish was originally called 天津芙蓉蛋飯 (Crab Omelette on Tenshin rice bowl) as the omelette was made like the Chinese omelette called Egg Foo Young (芙蓉蛋) and the rice was Tenshin rice (天津飯). But because the name is too long with complicated Kanji characters, it was abbreviated to 天津飯.

What is in the Crab Omelette on Rice (Tenshinhan)? 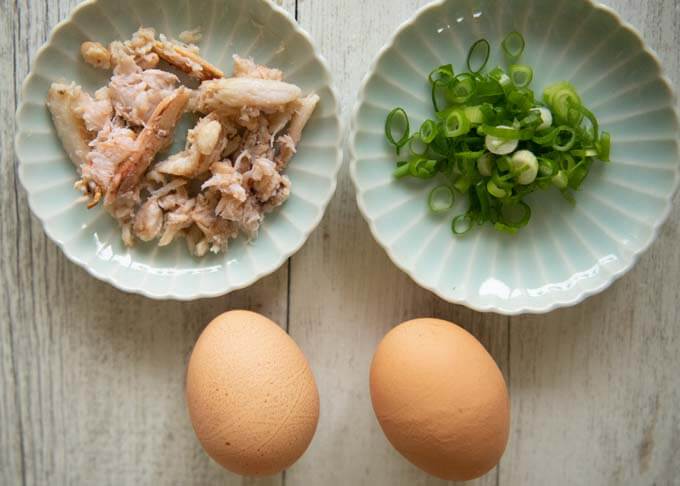 I used a jar of ready-to-eat blue swimmer crab meat as per the photo below. But if you cook a fresh crab and use the meat, that would taste better. 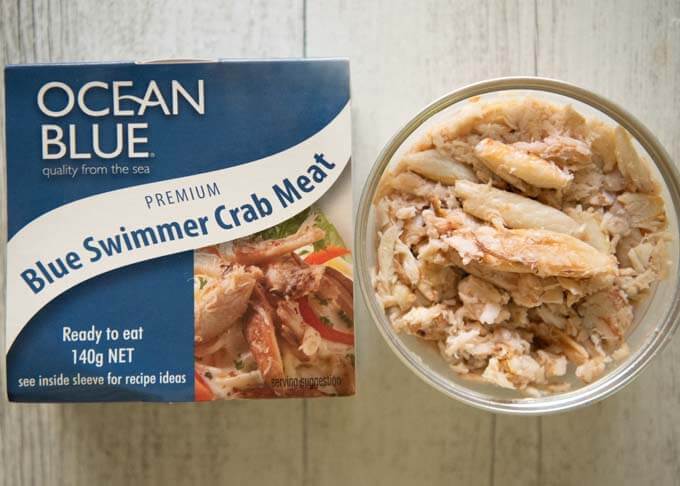 I like the surface of the round omelette soft, rather than well done. But if you prefer the eggs to be cooked through, that’s OK too.

Instead of adding chopped shallots to the omelette, some recipes decorate the surface of the omelette with green peas.

It is a fish cake moulded into the shape of the leg meat of snow crab or Japanese spider crab. Naturally, the sticks are coloured to look like crab legs. It even has a hint of crab flavour. 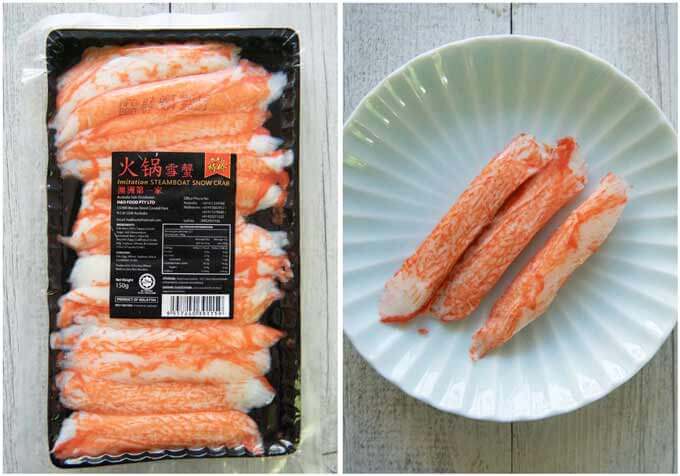 High quality Kanikama is made in such way that when you shred the stick by hand, the shredded pieces look just like the real leg meat of a crab.

You can buy kanikama at Japanese/Asian grocery stores – usually frozen. Unfortunately, the kanikama I can buy in Sydney doesn’t have a strong crab flavour and does not shred as well as it should.

Here is the Tenshinhan using kanikama. It’s more colourful than the one using real crab meat. I included the kanikama version in the recipe too. 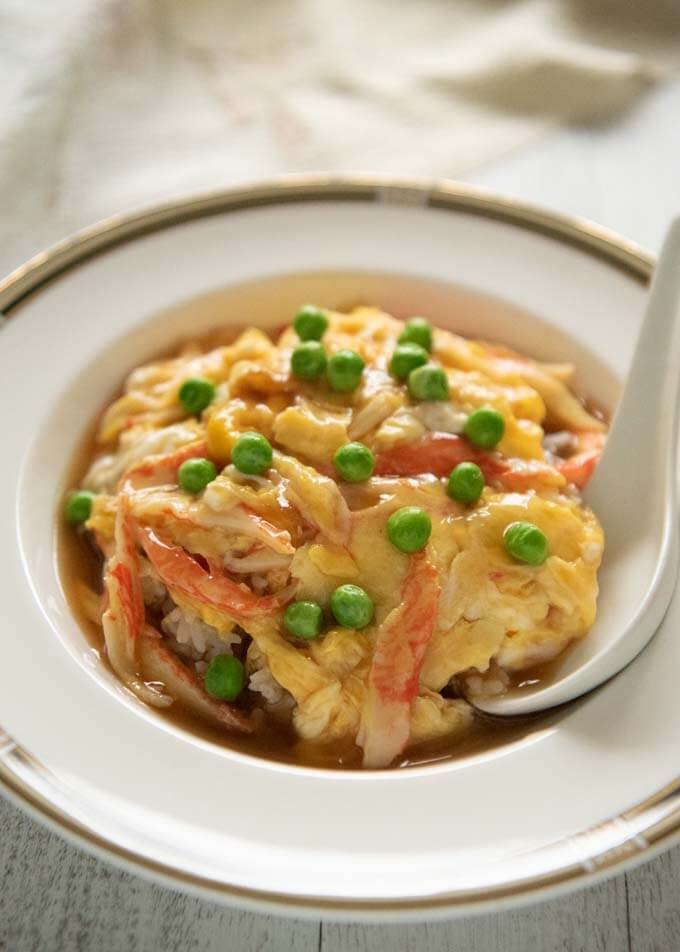 Without a thick sauce, it is not a Tenshinhan. Since the dish originated from a Chinese dish, the basis for the sauce is chicken stock, unlike a typical dashi-based Japanese-style sauce.

There are two different sauce flavours for Tenshinhan – a sweet & sour flavour and a sweet savoury flavour.

It’s just like Sydney vs Melbourne, there are so many things that Kanto and Kansai compete against each other over and go different directions!

The sweet and sour Tenshinhan sauce (Kanto-style) is made by mixing chicken stock, soy sauce, sugar, vinegar and is thickened by cornflour/corn starch. To make the Kansai-style sweet savoury Tenshinhan sauce, replace the vinegar in the Kanto-style with cooking sake.

Some recipes add oyster sauce or tomato ketchup to the sauce. But I like it simple. 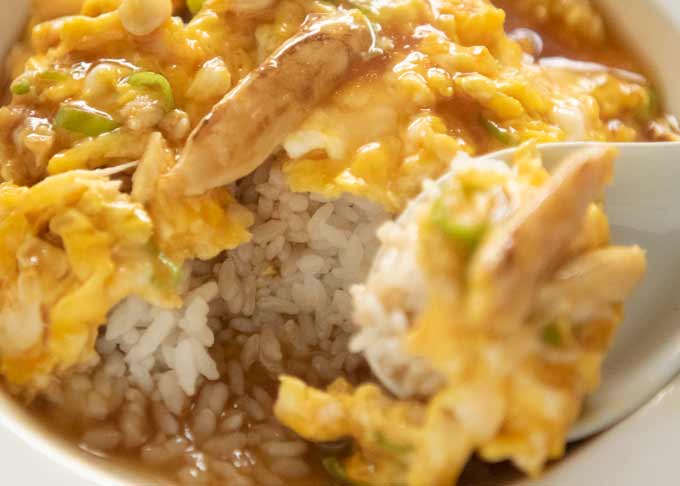 Crab Omelette on Rice (Tenshinhan) is a very easy dish to make. You will be amazed how the simple thick sauce makes this dish so flavoursome and special. 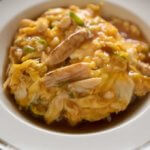 Tenshinhan is a Chinese-influenced Japanese dish. The fluffy omelette with crab meat is placed on the mound of rice. The sweet thick sauce poured over the omelette is so flavoursome.

I also included two different sauces to pour onto the omelette – sweet & sour sauce and sweet savoury sauce. Pick whichever you like.

Total time does not include the time to cook rice.

1. The amount of rice in my recipe is slightly less than that served at restaurants.

2. I used a jar of ready-to-eat blue swimmer crab meat (see the photo in the post) but you can of course buy a fresh crab and boil it, or a cooked leg of king crab from a fish shop. You can also use canned crab meat, but I find that it tends to have tiny pieces of shredded meat rather than chunks of meat.

3. Instead of using chopped shallots in the egg mixture, you can sprinkle defrosted peas over the Tenshinhan dish (see Omelette with Kanikama Crab Sticks in the recipe). Or both!

4. Kanikama is a fish cake moulded into the shape of leg meat of snow crab or Japanese spider crab and coloured to look like it. It even has a hint of crab flavour. See the sample photo in the post.

6. If you don't mind having well-cooked egg on the rice, you can make Crab Omelette on Rice the day before. Do not pour the sauce until you are ready to eat. Reheat the rice with the omelette and the sauce separately, then pour the sauce.

Today’s dish covers Main and Rice in the panel below. But I thought I needed to add a bit more meat to the meal to supplement protein. So I selected Shumai served as a side.

The other side dish needs to be a salad. Harusame Salad would be perfect for it. A pickled dish like Senmai-zuke is always good to go with the sweet sauce. 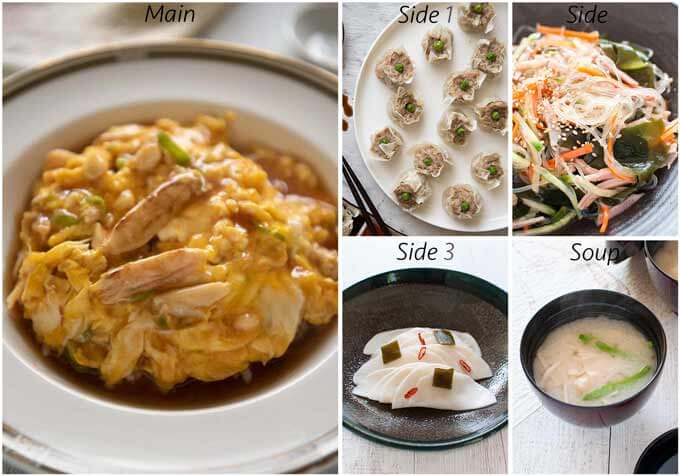