Today’s recipe, Spinach Kuro Goma-ae, is a counterpart of the Chrysanthemum Leaves Goma-ae that I posted a long time ago. Instead of the white sesame seeds that are used for chrysanthemum, I used black sesame seeds and spinach. 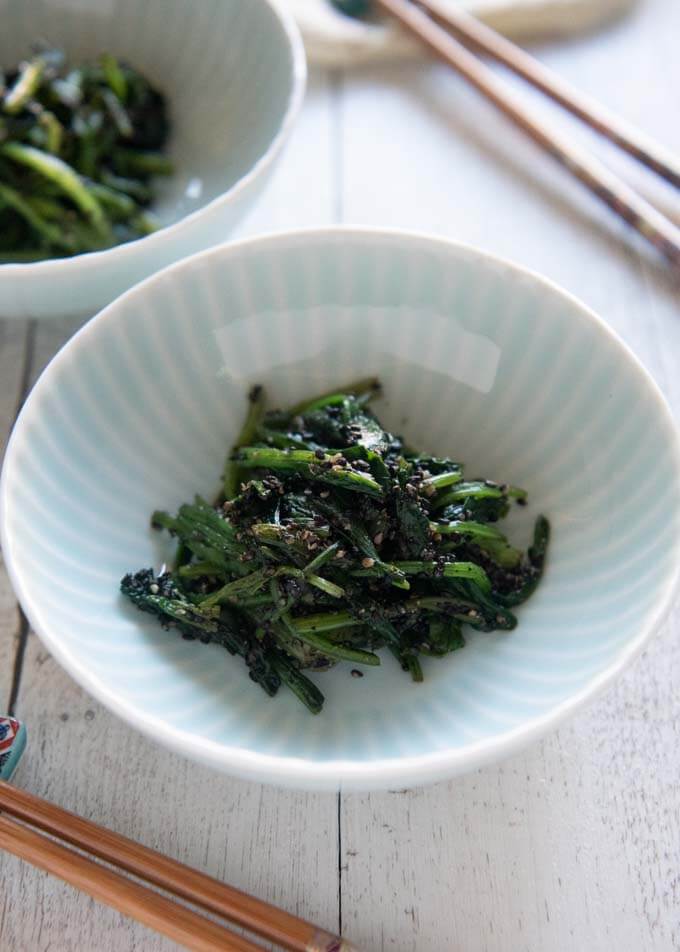 I think that the black sesame seeds have more pungent and richer flavour than the white sesame seeds. When you use them in a large quantity like in Goma-ae (Sweet Sesame Dressing), you can tell the difference between the flavours.

Maybe because of this, the food dressed in white sesame is called Goma-ae (meaning dressed in sesame seeds) instead of calling it Shiro Goma-ae to clarify that it is made with white (= ‘shiro‘) sesame seeds.

The foods dressed in black sesame seeds have been called Kuro Goma-ae (黒胡麻和え) to distinguish them from the white sesame dressing. ‘Kuro’ (黒) is black in Japanese, as you probably guessed. 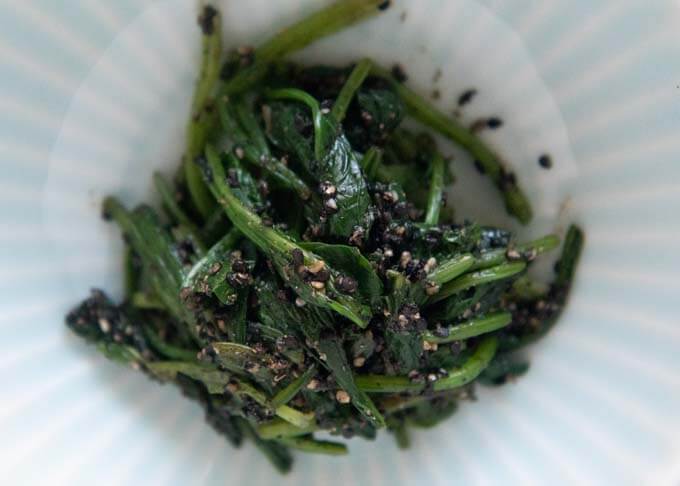 In terms of market share, white sesame seeds are by far the most commonly available. They are followed by black sesame and then golden sesame. I have never tried golden sesame, so I don’t know the flavour difference.

All three kinds of sesame seeds have a very similar nutritional profile. About 50% of sesame seed is fat (are you surprised? I was) but it is mainly unsaturated fat. About 20% is protein and 30% is vitamins, fibre and minerals. So, sesame seeds are good for you.

Sesame seeds are used widely in Japanese food. The simplest way of using them is sprinkling them over rice. You have probably seen some sushi rolls with sesame seeds coating the rolls. In the case of Osekihan, you are meant to sprinkle roasted black sesame seeds over the red rice.

What in my Spinach Kuro Goma-ae 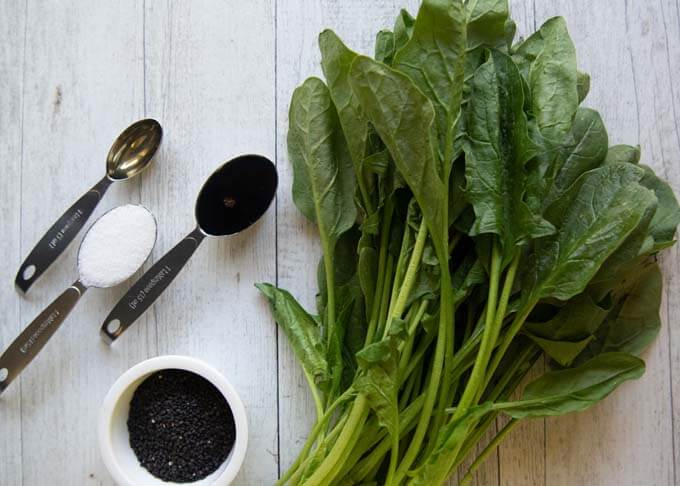 The spinach needs to be blanched with a pinch of salt.

Instead of spinach, you can use other green vegetables such as beans, chrysanthemum leaves, and broccoli. You can even use okra.

The dressing ingredients are basically the same as the Goma-ae that was described in the recipe Chrysanthemum Leaves Goma-ae. I just replaced white sesame with black sesame. It is a slightly sweet dressing.

How to make Spinach Kuro Goma-ae 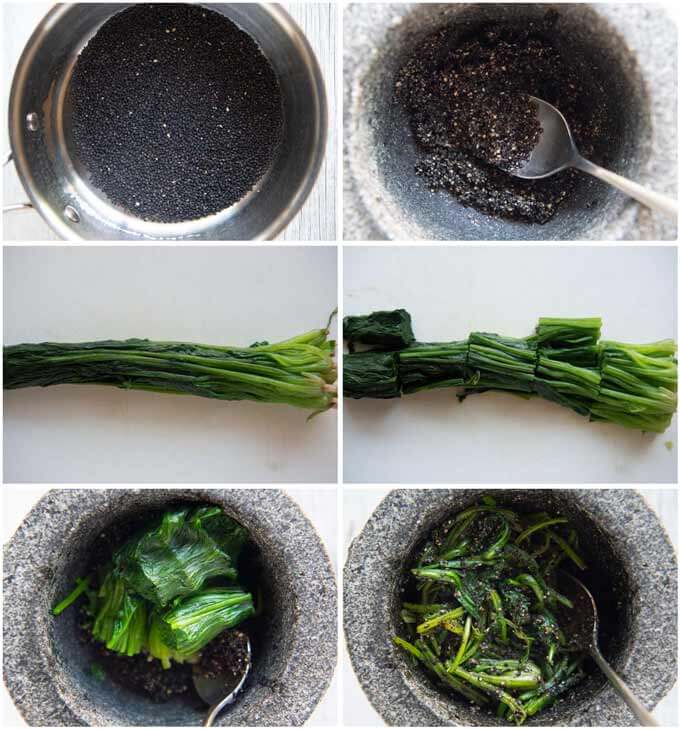 Even if you are using roasted sesame seeds, I recommend roasting them to bring out the aroma of the black sesame.

You need to squeeze the water out of the blanched spinach, otherwise the dressing becomes watery and there will be insufficient flavour. 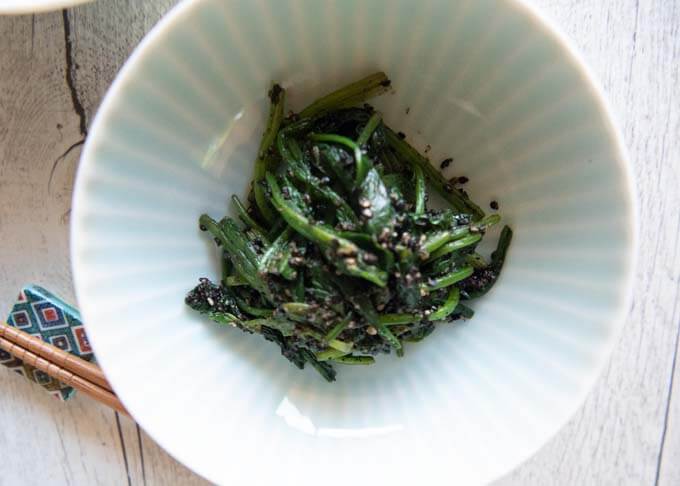 Just like Chrysanthemum Leaves Goma-ae, Spinach Kuro Goma-ae is a simple and easy dish to make. The dressing is quite tasty. 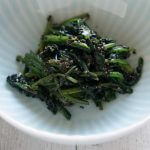 Today’s recipe Spinach Kuro Goma-ae is a pure vegetarian dish and very quick to make. The dressing has the full flavour of black sesame. It is a counterpart of the Chrysanthemum Leaves Goma-ae recipe that I posted a long time ago.

I don’t know why but when I have a Goma-ae I often have a grilled fish as a main to go with it. Maybe because the rich flavour of sesame needs a light main dish to go with it. I picked Grilled Whiting Fillets, but you can have other grilled fish, of course.

I must say that today’s meal combination is light and healthy, which is my kind of meal.

The ingredients of the Miso Soup can be any combination of vegetables. 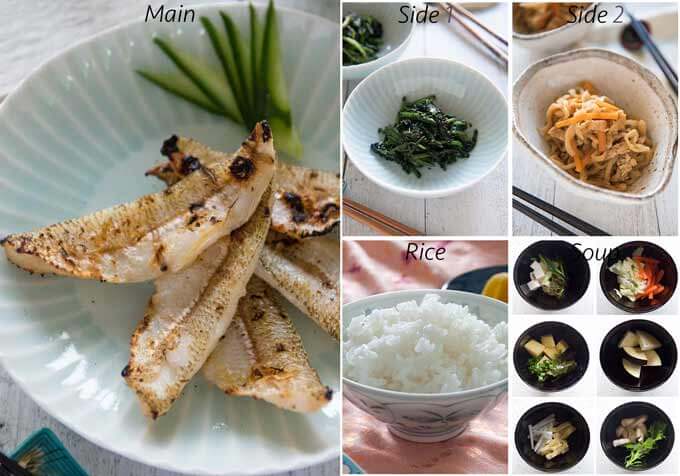