Simmered Squid and Taro is cooked in such a way that the squid pieces are plump and tender, while the taro has a fluffy soft texture. The pronounced flavour of the sweet soy simmering sauce goes very well with squid and taro. 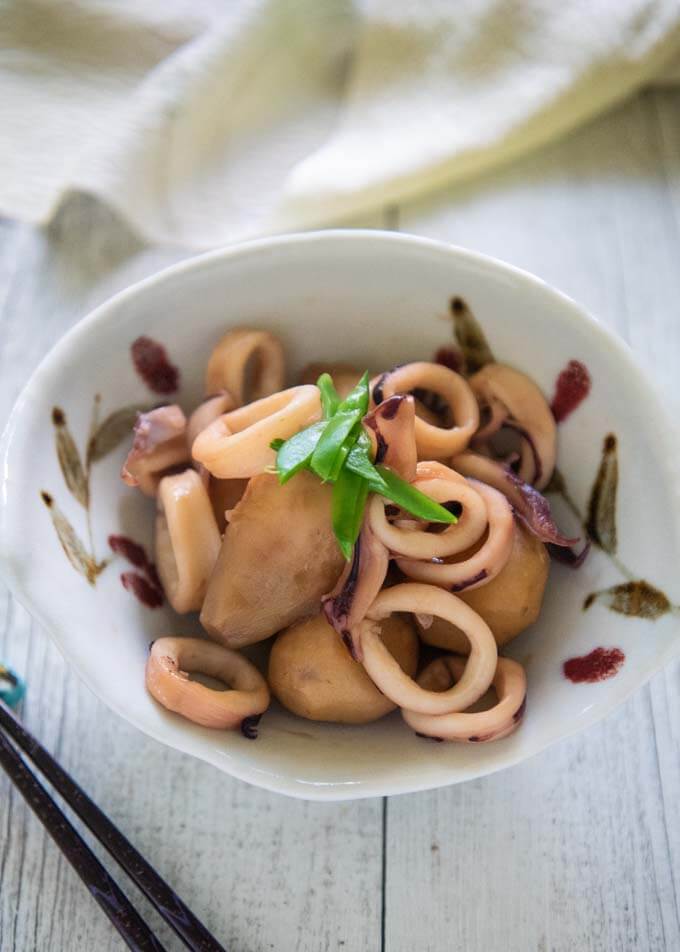 Simmered Squid and Taro is a classic home cooking dish. The squid used in this recipe requires minimum preparation. You just need to remove the guts, quill, and head. The skin and fins must be intact for today’s dish.

Simmered dishes are generically called ‘nimono’ (煮物) in Japanese. But when the key ingredient of the dish is small and round, such as Japanese taro (small taro) in today’s dish and chat potatoes (small potatoes), it is sometimes called ‘nikkorogashi’ (煮っ転がし) or ‘nikorogashi’ (煮転がし).

The first word ‘ni’ (煮) means simmer since it is a simmered dish. But instead of ‘mono’ (物), which means thing or item as in ‘nimono’ (煮物), it is followed by the word ‘korogashi’  (転がし), which  means rolling or turning over. Because small round ingredients are cooked by rolling them in the simmering sauce, such a funny name is adopted to the dish.

Even if you are cooking taro or potatoes, it won’t be called nikkorogashi/nikorogashi if they are cut into cubes or halved, and not round.

Incidentally, there is another Japanese word for simmered dish. It is called ‘nitsuke’ (煮付け).  Nitsuke also belongs to the nimono category, but a dish is called nitsuke only when it is cooked with a small amount of simmering sauce and flavours are added as you cook ingredients. An example of nitsuke is Simmered Flounder.

Another word for a type of simmered dish is ‘nishime’ (煮しめ), which is a dish cooked until the sauce is almost evaporated to preserve the dish longer. My recipe Simmered Vegetables is a typical nishime dish included in Osechi Ryōri (special dishes served at New Year in Japan).

What’s in My Simmered Squid and Taro

This recipe uses only two key ingredients and a typical combination of Japanese seasonings. 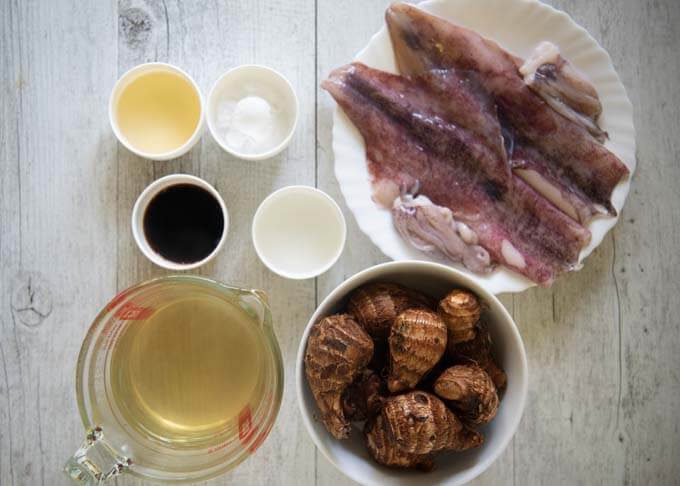 Many fish shops sell cleaned squid tubes, but they are skinless without fins. So, you need to buy fresh squid and ask the fish shop to clean it with the skin intact.

The balance between the quantity of squid and taro can vary. My squid was 300g/0.7lb after cleaning and the taro weighed 500g/1.1lb, which is a bit of a high ratio of squid against taro. This is because it happened to be the total weight of the two squid I could get. It is quite OK to have slightly less squid.

The garnish is optional but it adds a bright colour to the dish.

How to make Simmered Squid and Taro

The most important thing to remember is not to cook squid pieces too long otherwise they get chewy. 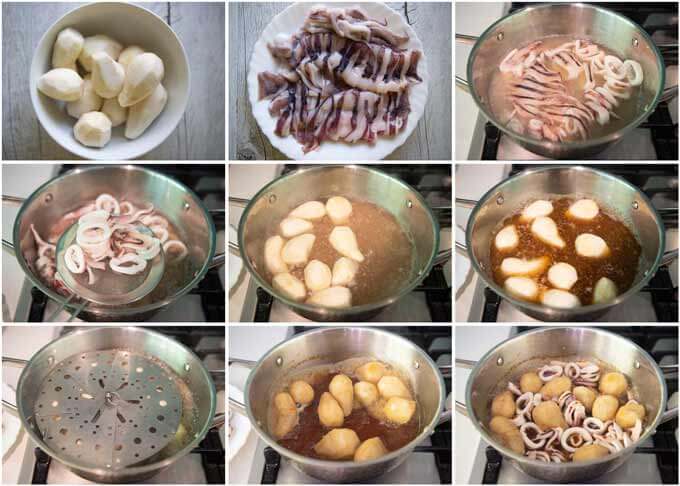 The intention of blanching the squid with sake in the dashi stock is to eliminate the squid smell. You only need to cook it until the surface of the squid pieces becomes white and plump.

You can serve Simmered Squid and Taro hot, at room temperature, and cold. It keeps in the fridge for up to 3 days. The flavour does not degrade even after a couple of days in the fridge. 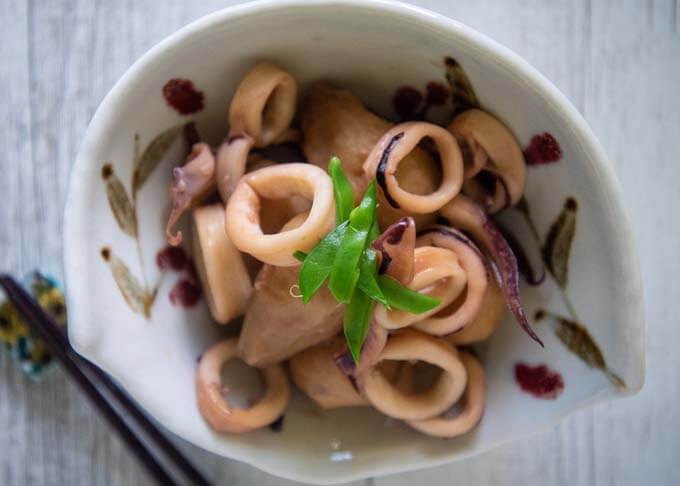 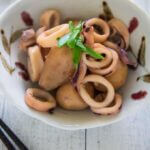 Simmered Squid and Taro is cooked in such a way that the squid pieces are plump and tender, while the taro has a fluffy soft texture. The pronounced flavour of the sweet soy simmering sauce goes very well with squid and taro.

Prep Time assumes that the squid is already cleaned.

1. I bought 2 similar-sized squid which weighed 450g/1lb before cleaning. Unlike many Western-style squid dishes, you don’t peel the skin off the squid tube.

2. Japanese taro is called ‘satoimo’ (里芋). It is much smaller in size and the outside skin is hairy. My local vegetable shops usually sell large taro, but they sometimes sell small taros.

My Japanese taro was about 4-5cm/1½-2" wide and 7-8cm/2¾-3⅛" long. If you can only find a large taro, cut it into smaller pieces and trim the sharp edges (it is called 'mentori' in Japanese) so that the edges of the taro pieces do not crumble when simmered.

3. Because of the hairy skin, it is easier to use a knife to peel the skin than a peeler.

4. When you put a skewer through a taro, you can get through it but with a slight resistance.

5. The depth of the simmering sauce and the strength of the flavour can vary depending on the size of the pan you are using and the size/shape of the ingredients. The idea is to leave a decent amount of liquid with just the right flavour. Do not condense it to almost no liquid as the flavour becomes too salty.

6. You can serve Simmered Squid and Taro hot, room temperature or even at cold temperature, directly from the fridge. You can keep it in the fridge for a few days.

7. Nutrition per serving as a side.

Simmered Squid and Taro can be a main dish, but in today’s meal idea I serve it as a side dish. The colour of the dish is not particularly bright, so I decided to serve a colourful rice dish, Omurice. It also boosts protein, which is not sufficient from the squid alone.

With yellow, red and brown on the table, I needed to add green to the meal set as well as a dish with a vinegar flavour. 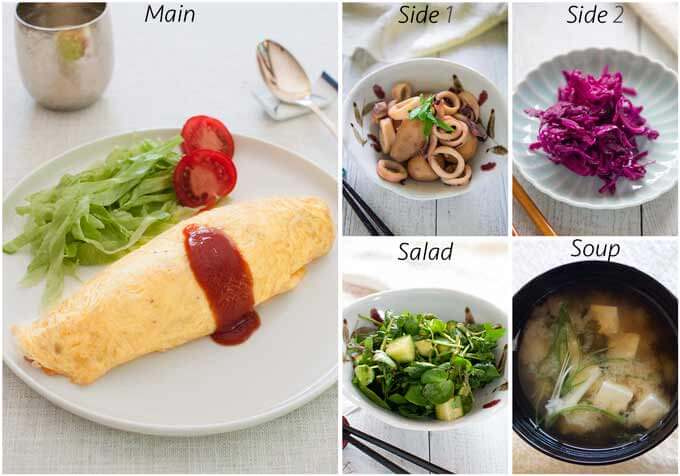