This is one of my favourite rice dishes. You can enjoy the distinct flavour of bamboo shoots in this dish, Rice with Bamboo Shoots (Takenoko Gohan). To preserve the delicate flavour of the bamboo shoots, I simply cook them with rice in a lightly flavoured dashi stock. It is so simple to make. Use konbu dashi to make it vegetarian.

Takenoko gohan is one of the popular takikomi gohan (rice cooked with vegetables with/without meat) that you see more of during spring in Japan.

Unlike Australia, Japan has distinct a climate and four seasons. It means that certain foods are only available in a particular season or are at their best for a short period of time. The prime season/period of foods is called ‘shun’ (旬) in Japanese.

The shun of bamboo shoots is spring and Rice with Bamboo Shoots is one of the spring dishes in Japan. OK, Australia has just gone into Autumn but a large number of my readers live in the northern hemisphere where it is now Spring.

I thought of posting this dish because I was in Japan until early March and takenoko gohan and other spring foods have started appearing in the shops in Japan.

The other kanji character for takenoko, ‘筍’ comes from the word ‘shun’ (prime season/period of foods) that I touched on earlier. Can you see the character (旬) embedded in ‘筍’?

In fact the little thing above ‘旬’ is the kanji for bamboo, ’竹’ (a bit squashed). Bamboo grows so fast that you can only crop bamboo shoots for a short prime period of time. Hence, they used ’竹’ and  ‘旬’ to call it ‘takenoko’.

This is nothing to do with the recipe but many kanji characters have stories behind how they were developed and when you know them, it is easier to remember even the complicated kanji characters. 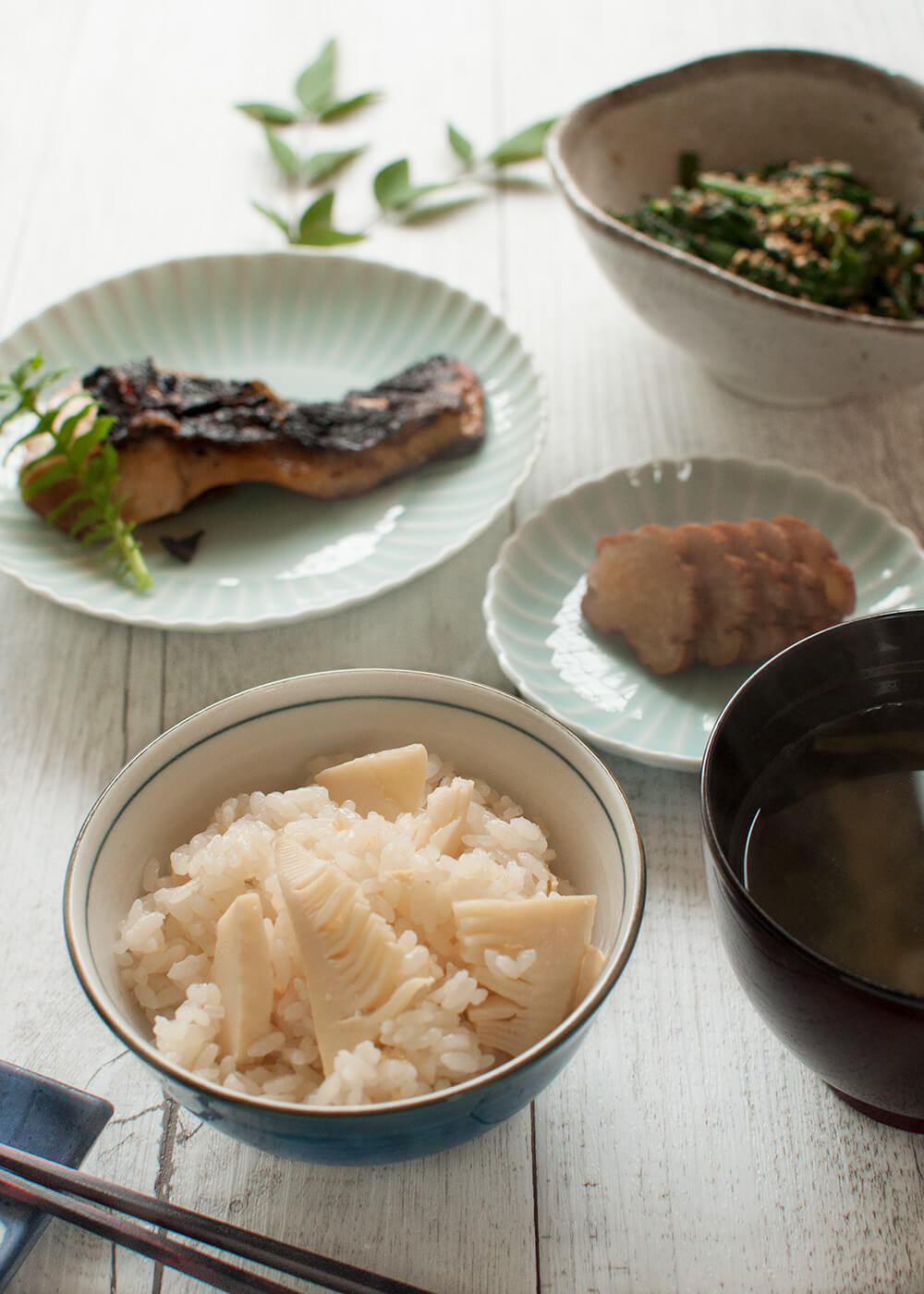 Back to the recipe now. There are different ways of making takenoko gohan. 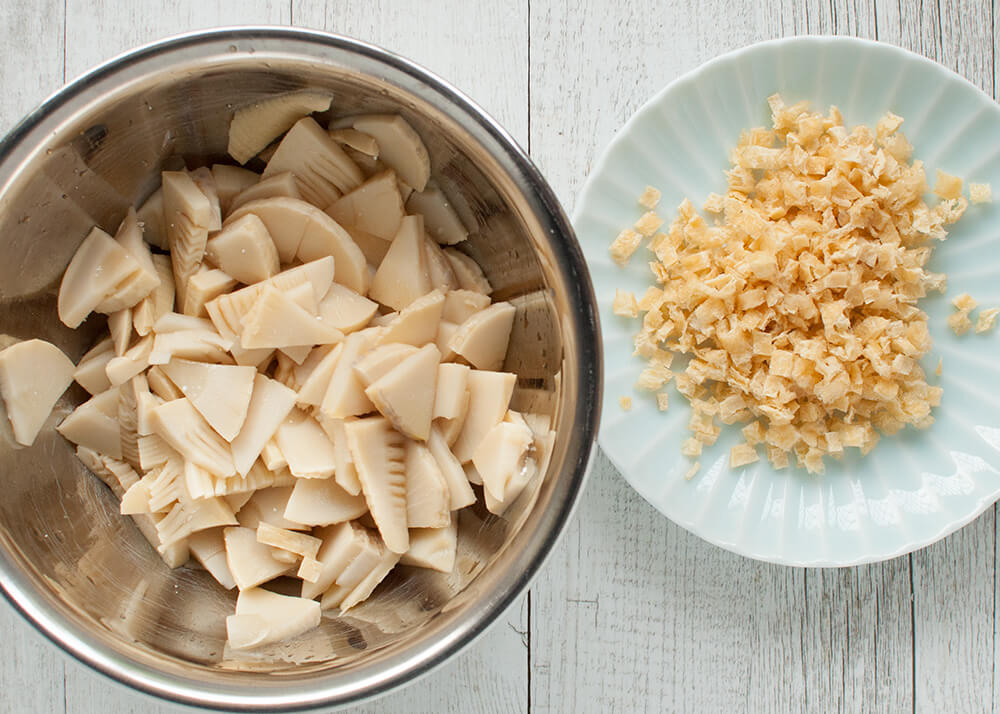 Bamboo shoots grow with layers of hairy dark brown skin wrapped tightly around them. There are thin long bamboo shoots and short fat bamboo shoots. In Japan, short fat ones are most popular and I certainly use these in all my bamboo dishes.

If you happened to be in Japan during the Spring, you might have noticed brown corn-shaped fat bamboo shoots sold at vegetable shops or supermarkets.

Unfortunately, you never see fresh bamboo shoots sold like that anywhere in Sydney. I once bought thin long fresh bamboo shoots with skins on from a Chinese vegetable shop. But when I peeled off all the hard skins, I hardly got any edible bamboo bits and I had to give up on them. What a waste!

So, I have no choice but to buy boiled bamboo shoots at Japanese grocery stores. They come in a vacuum sealed pack. The harsh taste of raw bamboo is already removed during the boiling process so it is ready to use (see the photos below). 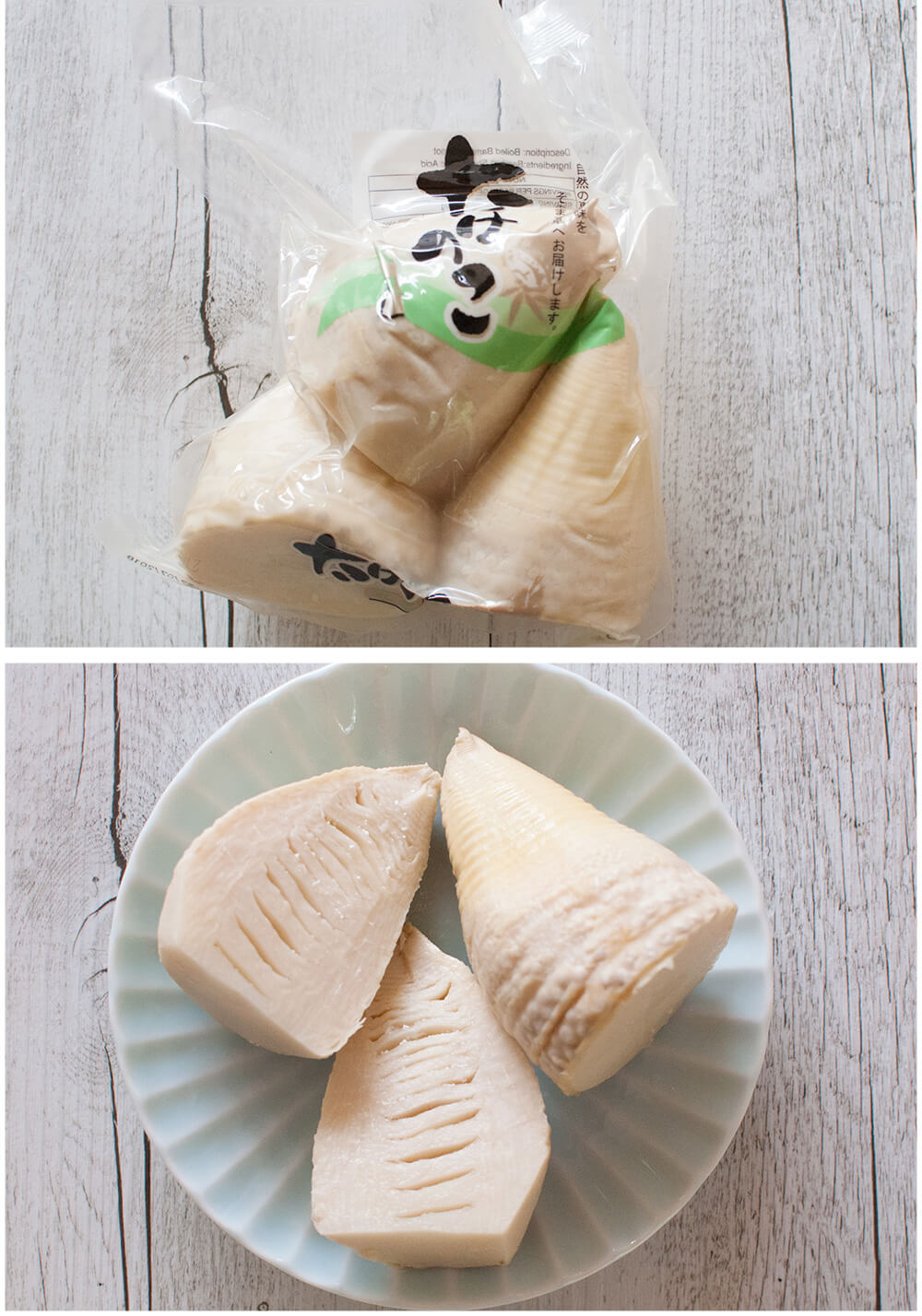 When you cut a boiled bamboo shoot in half vertically, you sometimes find white substances stuck between the segments. This is an amino acid called tyrosine, which comes out when boiled and gets crystallised when cooled down. It does no harm when eaten but it is better to remove it if you can (at least large bits). This is because the white substance makes the sauce cloudy when cooked in flavoured dashi stock.

You will also find canned boiled whole bamboo shoots that are usually a product of China or other Asian countries. I sometimes buy them especially when I use bamboo shoots for stir fry.

They are stringier than the vacuum sealed Japanese bamboo shoots and not very tender. So, if you have a choice, buy a vacuum sealed pack when making Rice with Bamboo Shoots.

My vacuum sealed boiled bamboo shoots weighed 400g (0.9lb). Every so often, I end up using only part of it. If you have left-over bamboo shoots, slice thinly into small pieces and freeze them in a zip-lock bag.

You can store them for 1 month and use them in stir fry, soup and other dishes. If you enter ‘bamboo shoot’ in the search box on my blog, you will see many dishes using bamboo shoots.

Takenoko gohan is considered to be a Spring dish in Japan but you can eat it all year round using boiled bamboo shoots. I hope you try it. 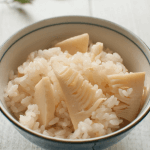 1. You can buy aburaage from Japanese/Asian grocery stores, they are usually sold frozen. More details about aburaage can be found in my post, Shimeji Gohan.

2. You can buy vacuum sealed boiled bamboo shoots from Japanese grocery stores. These bamboo shoots are very tender and suitable for cooking with rice.

Alternatively, you can use canned boiled bamboo shoots that are available at Asian grocery stores or possibly in supermarkets. They are a bit tougher and stringy. So, if you are using canned bamboo shoots, I would suggest that you slice the bamboo shoots into smaller pieces.

3. I used light soy sauce to maintain the delicate pale colour of the bamboo shoots. But you can use normal soy sauce instead. Dark soy sauce is not suited for this.

4. If you are a vegetarian, please use konbu to make dashi stock, which is described in Varieties of Dashi Stock.

The amount of dashi stock required may be different if you are using a rice cooker. Please follow the instructions of the rice cooker. Dashi stock + sake + soy sauce should match with the required amount of water.