Do you know why the boiled egg served as a topping for ramen (which is called Ramen Egg) is so tasty? It’s because the soft-boiled egg is marinated in a soy-based sauce and is full of umami. The outer layer of the egg white absorbs the flavour of the marinade and stains the egg light brown colour. 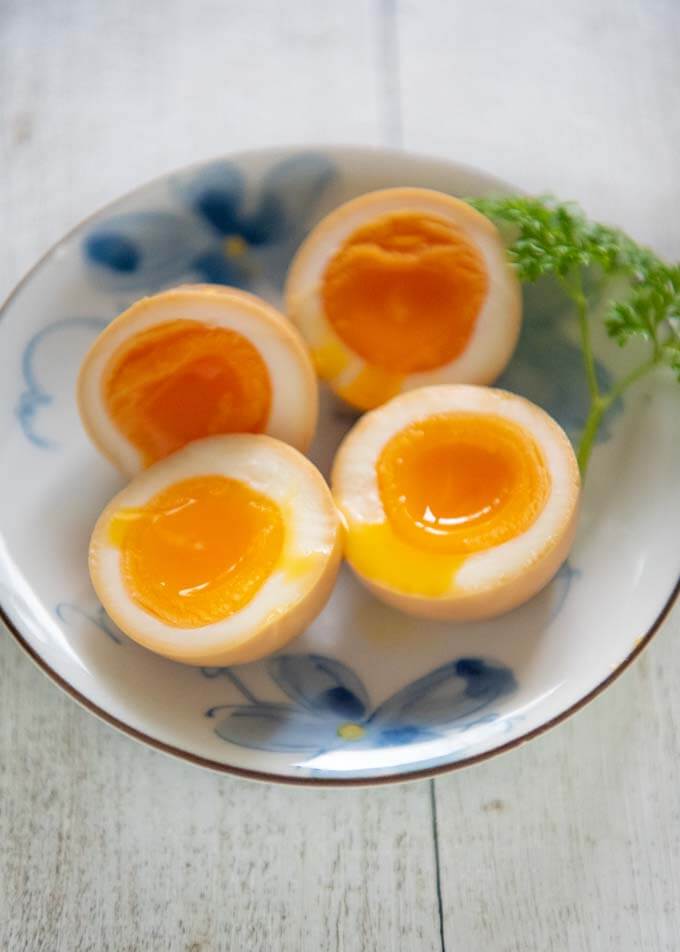 Ramen Egg is basically a marinated soft-boiled egg (it can also be hard-boiled). When you cut the egg in half, you can see the brown-coloured layer on the outside of the egg white and the orange-yellow egg yolk oozes out. It looks so appetising.

Although I call it Ramen Egg since it is often added to a bowl of ramen, it is also served as a side dish or a starter for drinks in Japan. Perhaps that’s why Japanese people call it ‘ajitsuke tamago‘ (味付け卵/味付け玉子), rather than calling it a name that associates it only with ramen.

The word ‘ajitsuke‘ (味付け) means flavoured and ‘tamago‘ (卵/玉子) means egg. Some people use the abbreviated name, ‘ajitama‘ (味玉) by shortening each word.

Soft-boiled Egg is the Key

I think that a soft-boiled egg looks better than hard-boiled egg when it is cut open. When you use it as a ramen topping, you halve the egg to show the egg yolk in the centre. Imagine the yolk slightly runny in the centre. It looks so good. 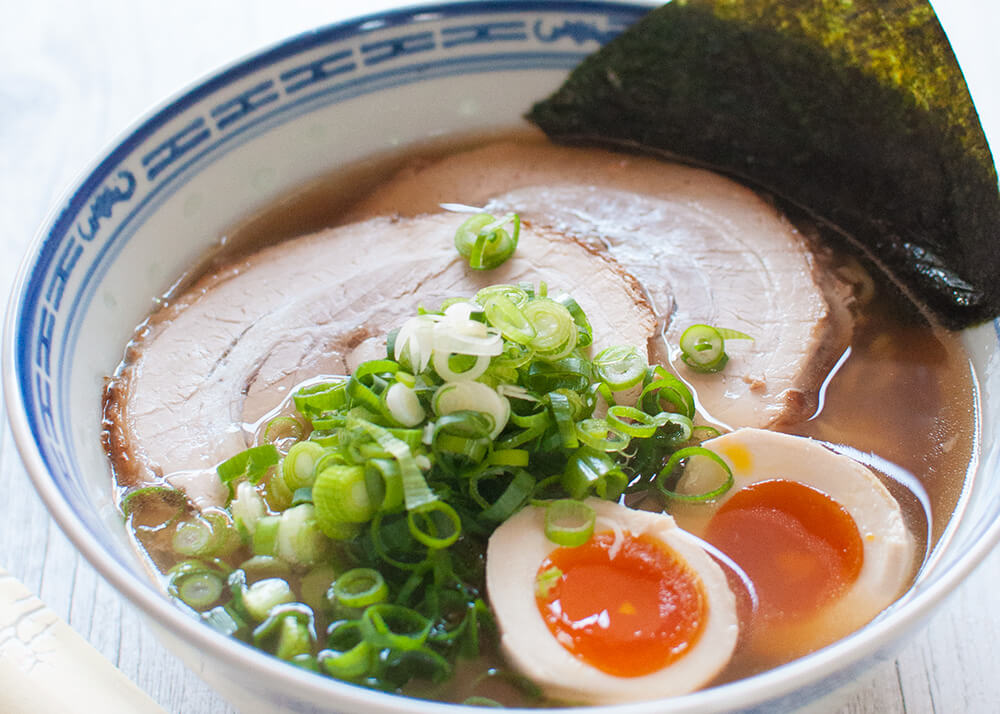 I think soft-boiled egg can even be classified into three ways, depending on how runny the yolk is:

In my recipe, I included how to make a soft-boiled egg perfectly. I tried many ways of boiling eggs and finally I found the method that gave me a consistent outcome every time.

What is in my Ramen Egg

All the ingredients below with exception of the eggs are for the marinade. 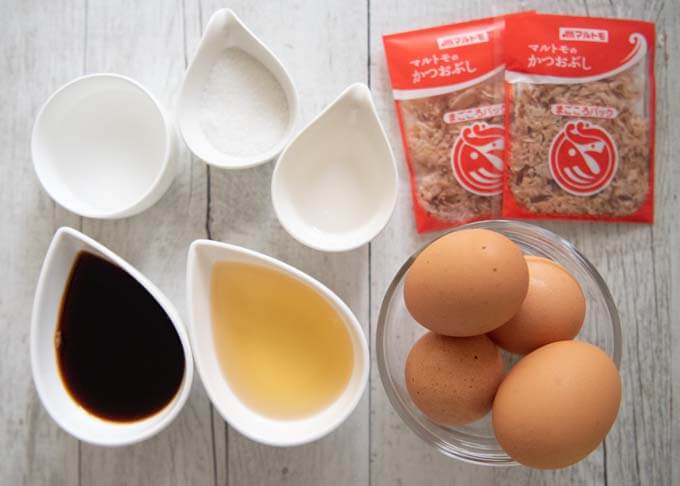 The amount of water in the marinade determines the strength of the flavour. The ratio of water used in my recipe is suitable for marinating eggs for about 8-10 hours.

If you are intending to leave the eggs in the marinade longer, you should add more water otherwise the eggs become too salty. Similarly, you should reduce the water if you only have a few hours to marinate. Exactly how much to increase/decrease the water needs to be worked out by trial and error as each person has a different level of sensitivity to the saltiness.

How to make Ramen Eggs

To minimise the wait time, I make the marinade first, then boil eggs while cooling down the marinade . But you can of course boil the eggs first if you prefer. 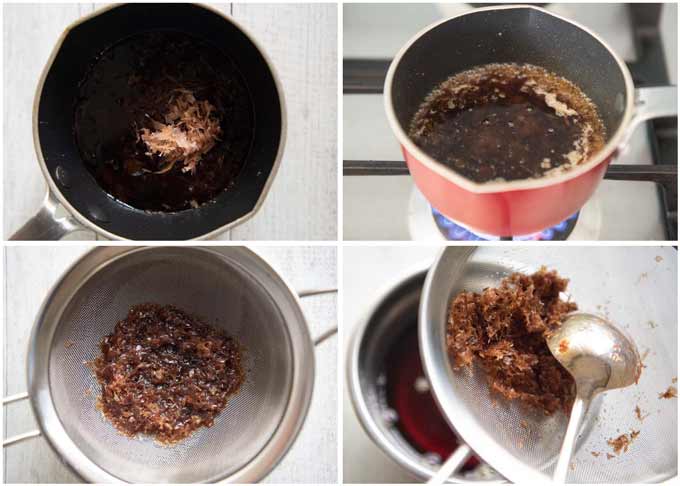 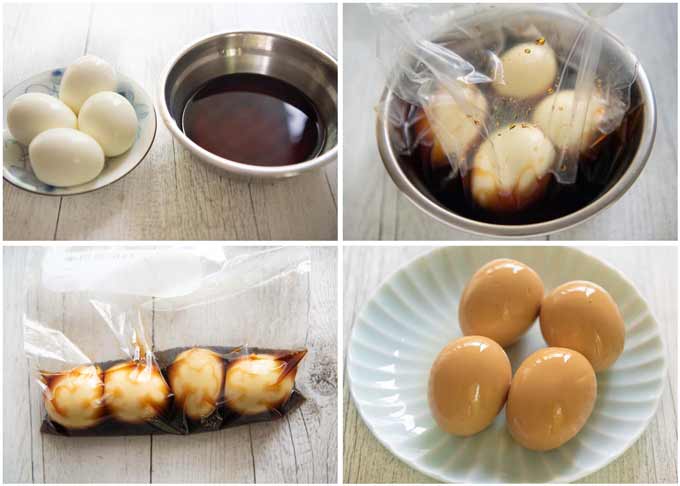 The marinade of my Ajitsuke Tamago includes bonito flakes that gives you a great degree of umami in addition to the umami from the soy sauce, cooking sake, and mirin.

My way of boiling eggs

There is a good reason why I add chilled eggs after the water starts boiling:

Adding chilled fresh eggs to the boiling water eliminates these inconsistent factors and you will get more consistent results. 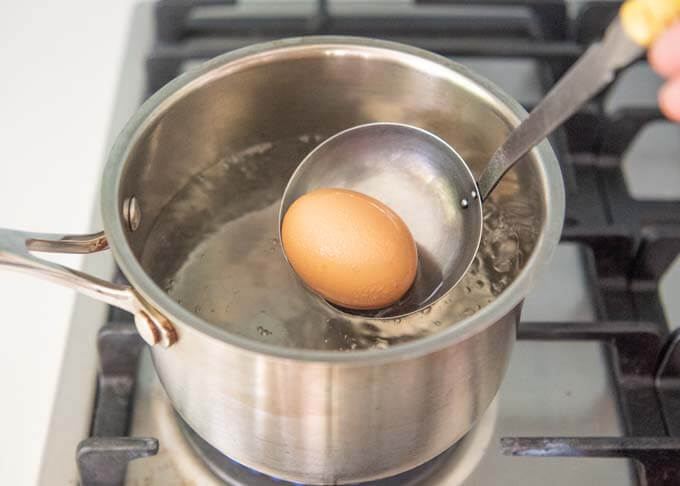 I used to have trouble peeling the shells of boiled eggs. The shells were stuck to the membrane of the egg so hard that a piece of egg white came with the shell, resulting in bumpy surface of the boiled egg. But not anymore!

Before boiling, I make a little hole on the round end of the egg using a needle. It seems to separate the membrane from the shell, allowing the shell to peel off easily.

In Japan, Ajitsuke Tamago is as well as being used as a topping for ramen (hence it is called Ramen Egg), it is also served as an appetiser at izakaya (Japanese-style tavern) and as a side dish to go with cooked rice.

It keeps only a few days in the fridge, but you can make it again so easily. The marinade can be reused for a couple of times as long as you boil it after use. Alternatively, you can use it in place of a sauce that is sweet-soy flavour such as Oyako-don sauce and Teriyaki sauce, with some flavour adjustments. 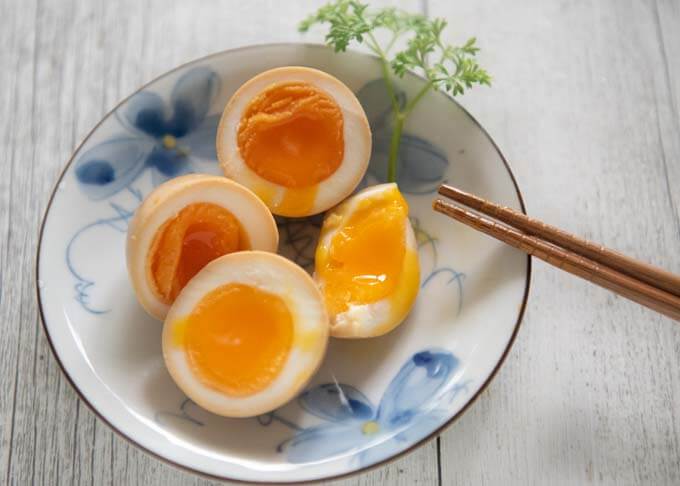 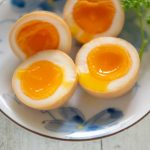 Ramen Egg is a soft-boiled egg marinated in soy-based sauce that is full of umami. The outer layer of the egg white absorbs the flavour of the marinade and stains the egg a light-brown colour.

Ramen Eggs are served not only as a ramen topping but also a side and as nibbles for drinks.

2. I sprinkle leftover bonito flakes over a bowl of cooked rice just like furikake. It's so delicious.

4. It is important to quickly cool the eggs down to stop further cooking with residual heat.

5. Place the eggs with the round side of the egg up in the egg carton. Using a needle and a small hammer or the side of a pair of kitchen scissors, gently.

6. You can use a small knife to halve the egg as well, but a thread makes a cleaner cut especially when the yolk is runny.

Ramen Egg (Ajitsuke Tamago) goes very well with Kakuni, which I picked as a main. Both dishes have a bsoy-based flavour, so the salad needs to have a quite different flavour.

A clear soup with dried tofu skin gives a mild taste to contrast the strong flavour of Kakuni. 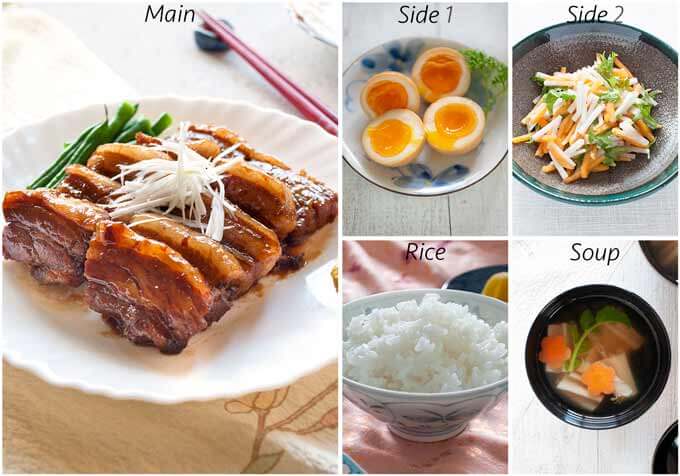