The lovely pattern of sliced lotus root with decorative mizuna leaves makes this salad very attractive. And the sesame sauce dressing makes it a perfect salad. The crunchiness of lotus root, the mild peppery flavour of mizuna, the lovely aroma of sesame…. It is such a simple salad to make but so tasty. 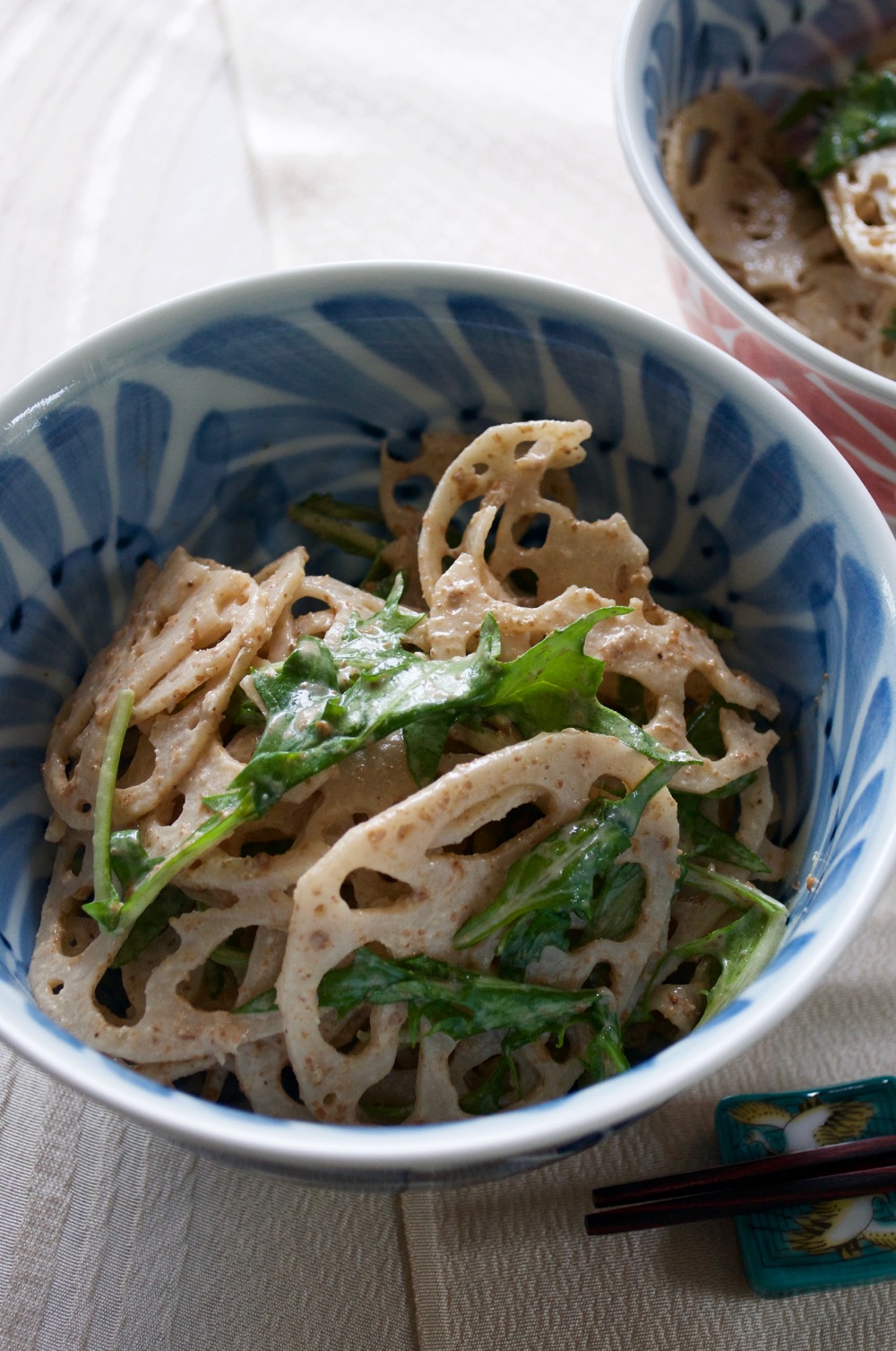 When I took this salad to the BYO lunch with friends some time ago, quite a few people asked, “What’s this?”.  I guess lotus roots are not commonly used in cooking here in Australia unless you have an ethnic background or you are a foodie. But as soon as they tried it, they just loved it.

Lotus root is called “renkon” (蓮根) or “hasu” (蓮) in Japanese. It is a direct translation as 蓮 is lotus and 根 is root. Lotus root does not look attractive when displayed at vegetable shops or Asian grocery shops. It’s just a weird looking root, usually with traces of mud on it.

Although we call it a “root”, it is actually a stem modified for underwater growth (I didn’t knot this!) And real roots are those short black strings that come out of the narrow part of the lotus root which connects each section. The lotus root I used was only one section of the stem (so the tiny black strings coming out of both ends of my lotus root are the real roots. 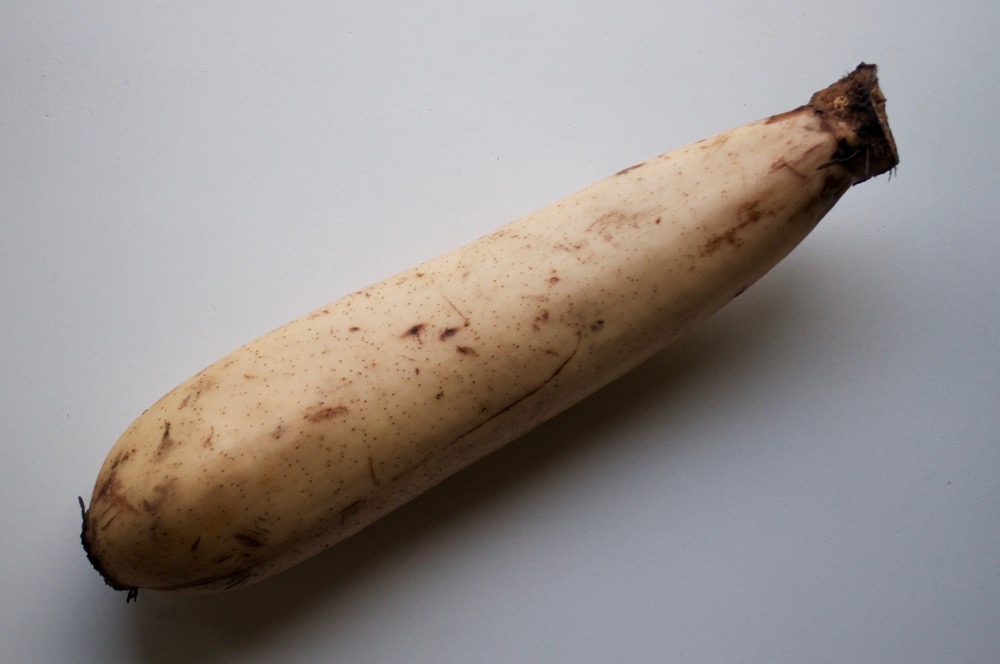 Who would have thought the inside of this unattractive stem has a beautiful pattern of 8-9 holes? I say 8-9 holes (not including a hole in the centre) because apparently, the number of holes in a lotus root is usually 8 but the lotus roots cultivated in Iwakuni city in Japan have 9 holes. I counted the number of holes in my lotus root and it had 7 large holes and 2 tiny holes. I am not sure if the 2 tiny holes are meant to be 1 large hole but is somewhat deformed or if the holes did not grow as large as the others. Either way, it still has 8 or 9 holes. 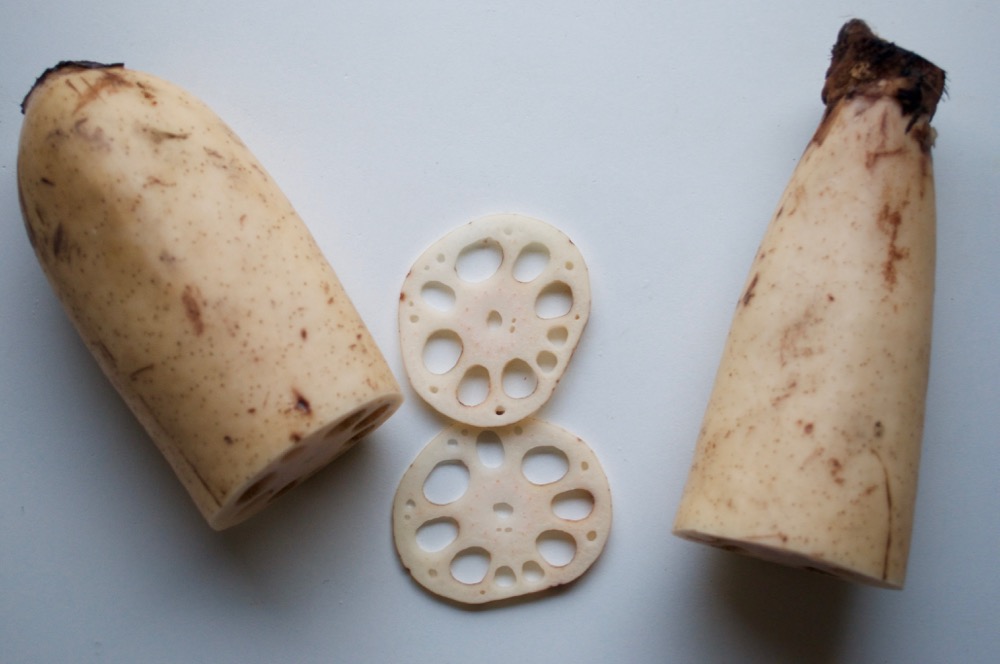 For the salad you will need to slice the lotus root into 2mm thickness. This can be done with a knife but I use my Kyocera slicer (photo below). This slicer is quite handy as you can change the thickness of the slice into 0.5mm, 1.3mm and 2.0mm. I didn’t mention it in the recipe but I used this slicer to cut the cucumbers to make Cucumber and Seaweed Sunomono (Vinegar Dressing), too.

I bought this slicer in Japan many years ago but these days, you can buy it at kitchenware shops. The Kyocera brand sells a slicer without thickness variations as well. So if you are intending to get one, just make sure that you buy a multi thickness slicer for more versatility. 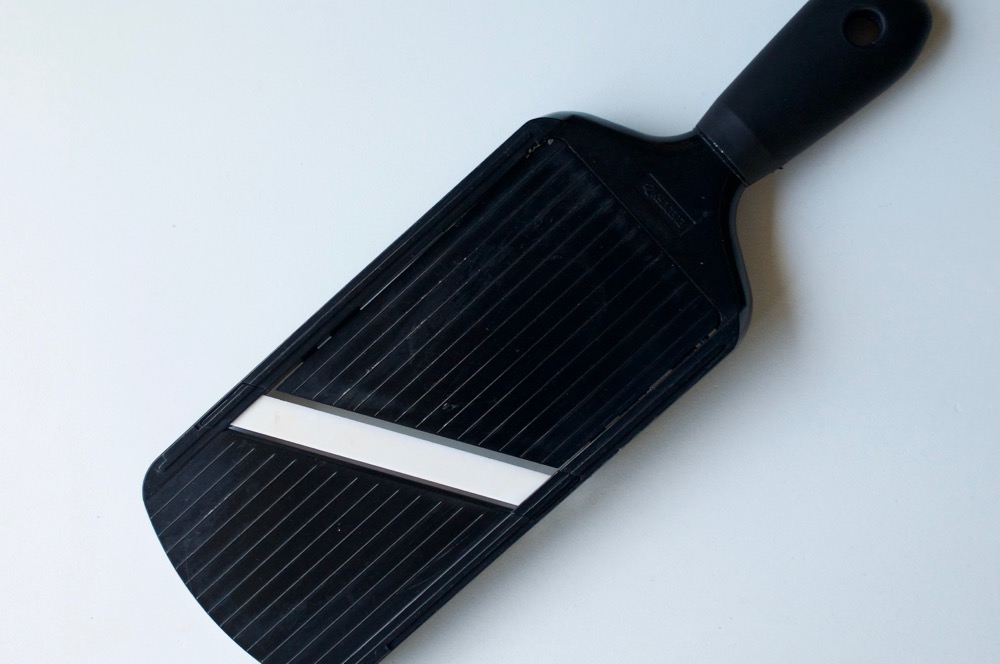 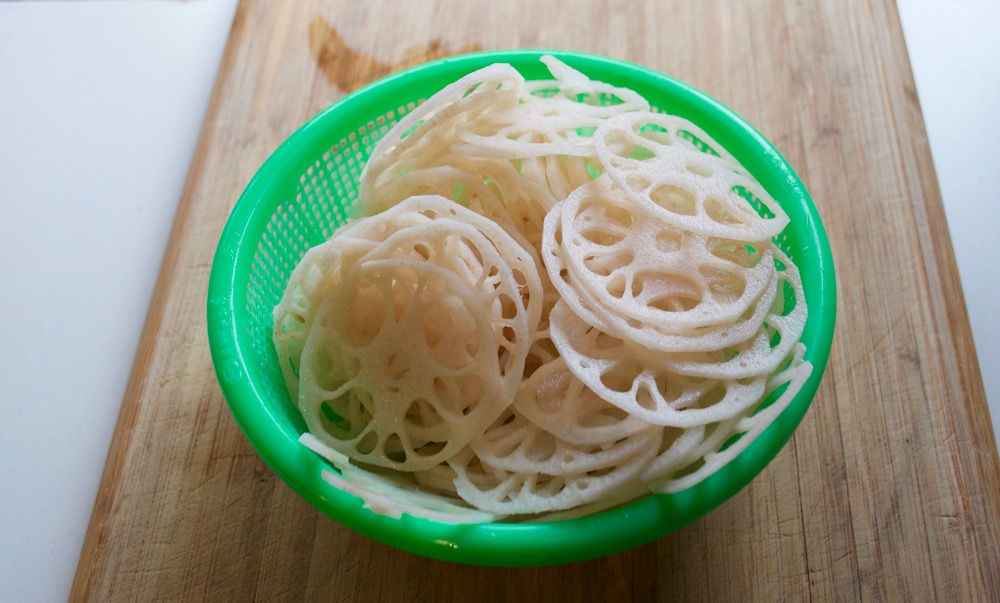 With a slicer, lotus root is sliced with a consistent thickness.

Mizuna (水菜) has spiky leaves and tastes peppery with a bit of spiciness which is not as strong as rocket (arugula). It is not only good to eat but also decorative with its delicate appearance. You can eat it uncooked as well as cooked. It is often used in Japanese hotpot in place of chrysanthemum leaves. 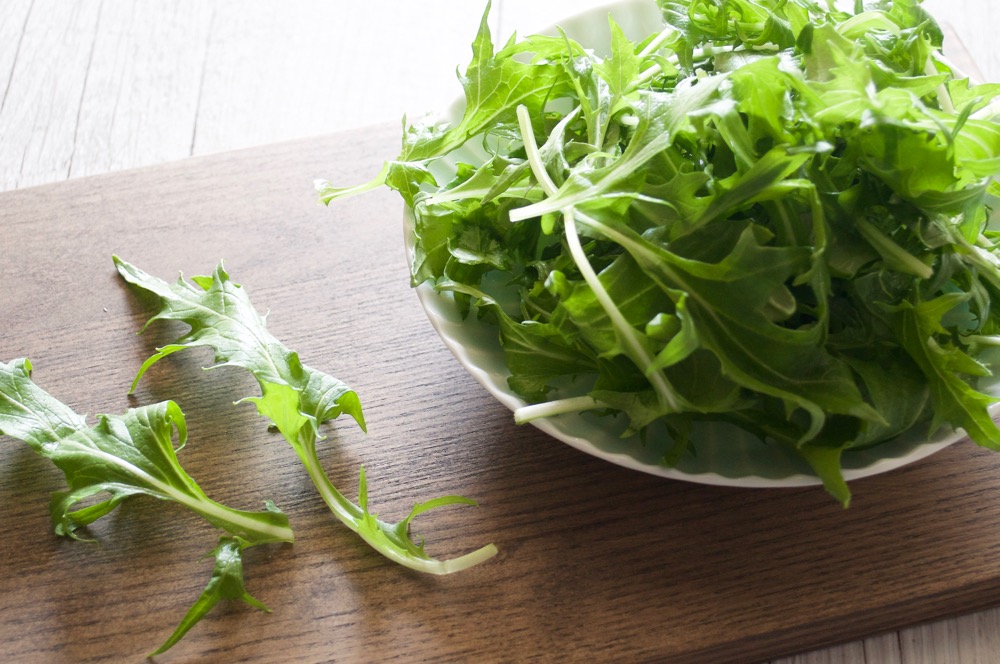 The Kanji character for mizuna, “水菜” translates to water leaves. The word mizu (水) means water and na (菜) is leafy vegetales. According to Japanese Wikipedia, the name came from the way it was cultivated in the past. Unlike other vegetables, water used to be the main source of cultivation for mizuna and the name reflects that. It must contain a lot of water in each leaf because it shrinks a lot when cooked.

Like lotus root, mizuna is also a winter vegetable so I cannot get it all year round in Sydney. Also, not all vegetable shops sell it even when it is in season. I guess mizuna is not as popular among Aussies as other leafy salad greens such as baby spinach and rocket (arugula). I hope it will become as popular as other salad leaves in the near future. If you cannot get hold of mizuna, baby spinach or English spinach would be a good substitute. In the case of English spinach, blanch it and cut into bite size length. 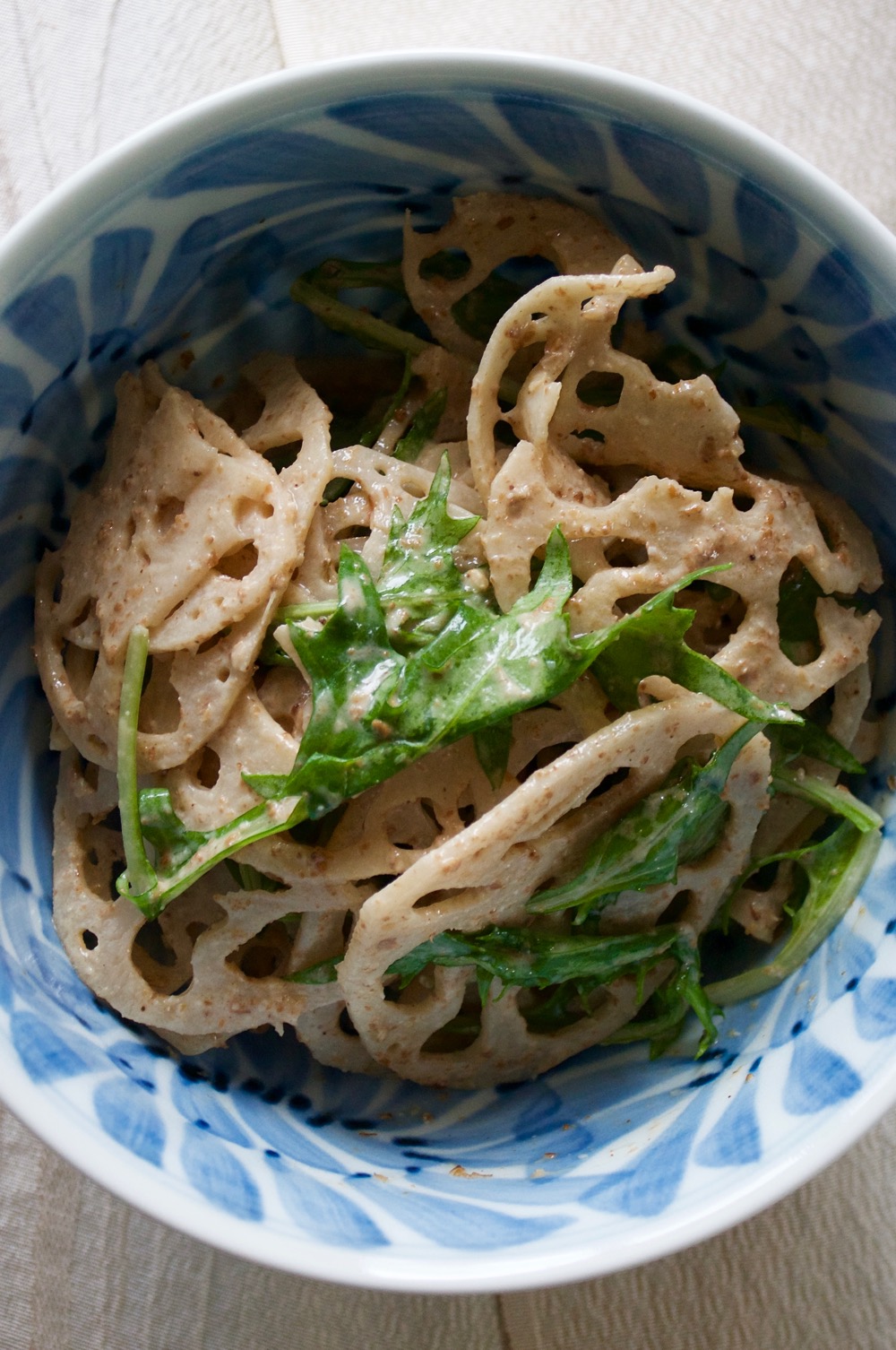 I have to make a confession. I used store bought sesame sauce for today’s salad. But I added finely grated roasted white sesame and some sesame oil to transform it into my version. The photo below is the bottle of the sesame sauce I used. It is called “Kin no gomadare” (金のごまだれ, golden sesame sauce) and the brand name is Mizkan. There are many different brands of sesame sauce and dressings including this one at Asian/Japanese grocery stores. My son and I tried different gomadare but we thought this was the best. 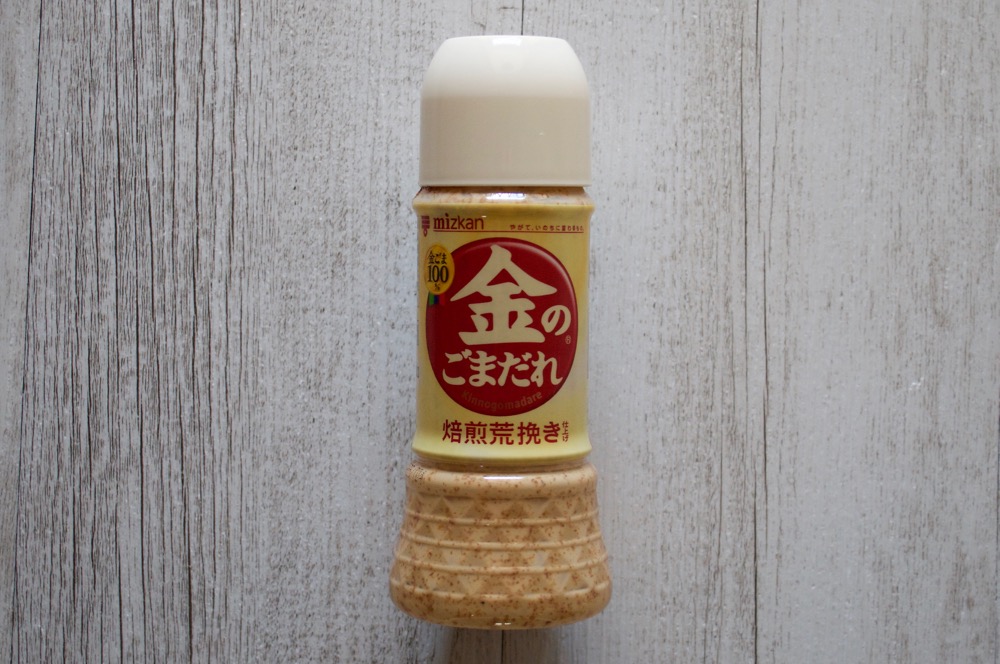 I made the Lotus Root and Mizuna salad at Nagi’s request as she was at my place when I made Yakisoba which I posted together with this post. So I attempted to use the gomadare recipe which I posted in the Japanese Dressings post and adjusted the flavour. Because I was in a hurry and I did not grate white sesame properly, it was a big failure. Nagi said it was not the gomadare she liked. She said, “Mum, you need to make the one your kids like, not the ‘should be’ recipe! “. So I recreated it using my usual sesame sauce. Here is the failed salad in the photo below. You can see the sesame seeds are everywhere due to my slackness. 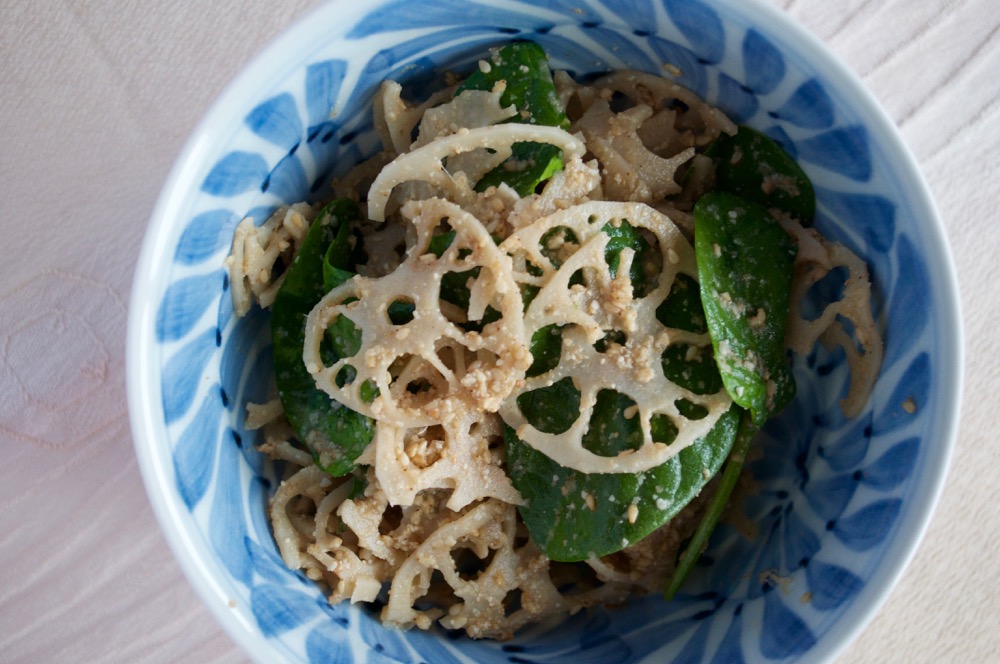 Please don’t get me wrong. Gomadare in the post Japanese Dressings is great as well. It’s just that this recipe uses a different sauce which has a hint of creamy mayonnaise-like rich taste with a milder acidity. And the photo below is how the salad with the usual gomadare looks. See the difference between the photo above (failure)  and below (real one)? 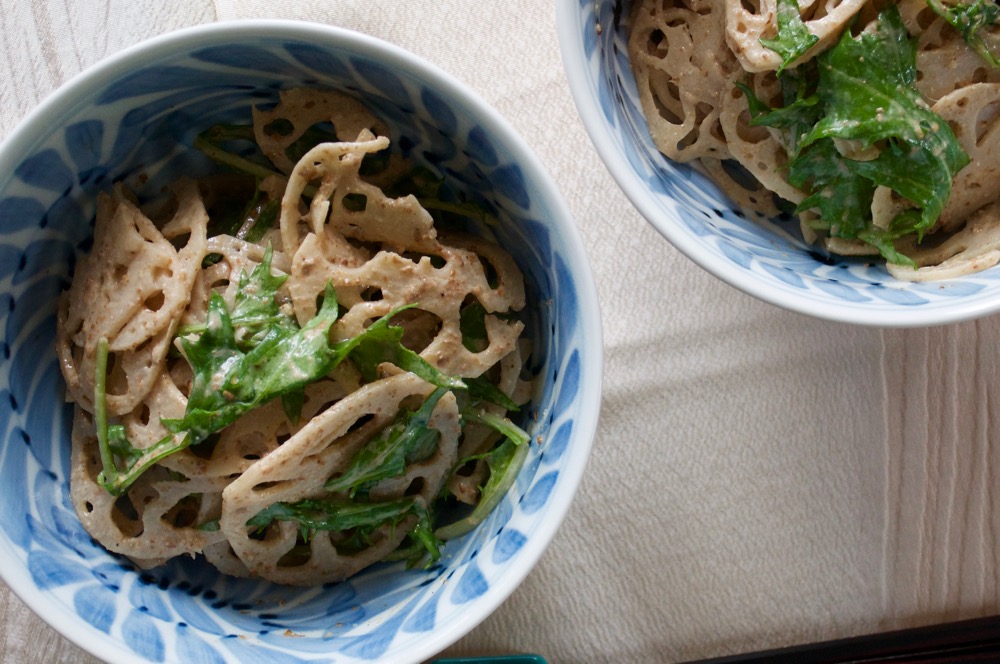 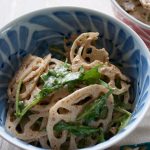 1. If you can't find mizuna, you can use baby spinach leaves or English spinach (blanched, cut into bite size).

2. I used store bought gomadare for this salad. My favourite gomadare is the brand Mizkan and called “Kin no Gomadare” (金のごまだれ, golden sesame sauce). You can buy it at Asian/Japanese grocery stores. You can get other brands, of course but remember that the flavour of gomadare varies depending on the brand and it is a matter of finding your favourite flavour.

3. The boiling time varies depending on freshness and lotus root variety. In Japan, you only need a few minutes to cook it. But whenever I make lotus root salad here in Sydney, I have to cook the sliced lotus root for around 10 minutes. If you like a crunchier texture, I suggest you boil it for less time than 10 minutes.